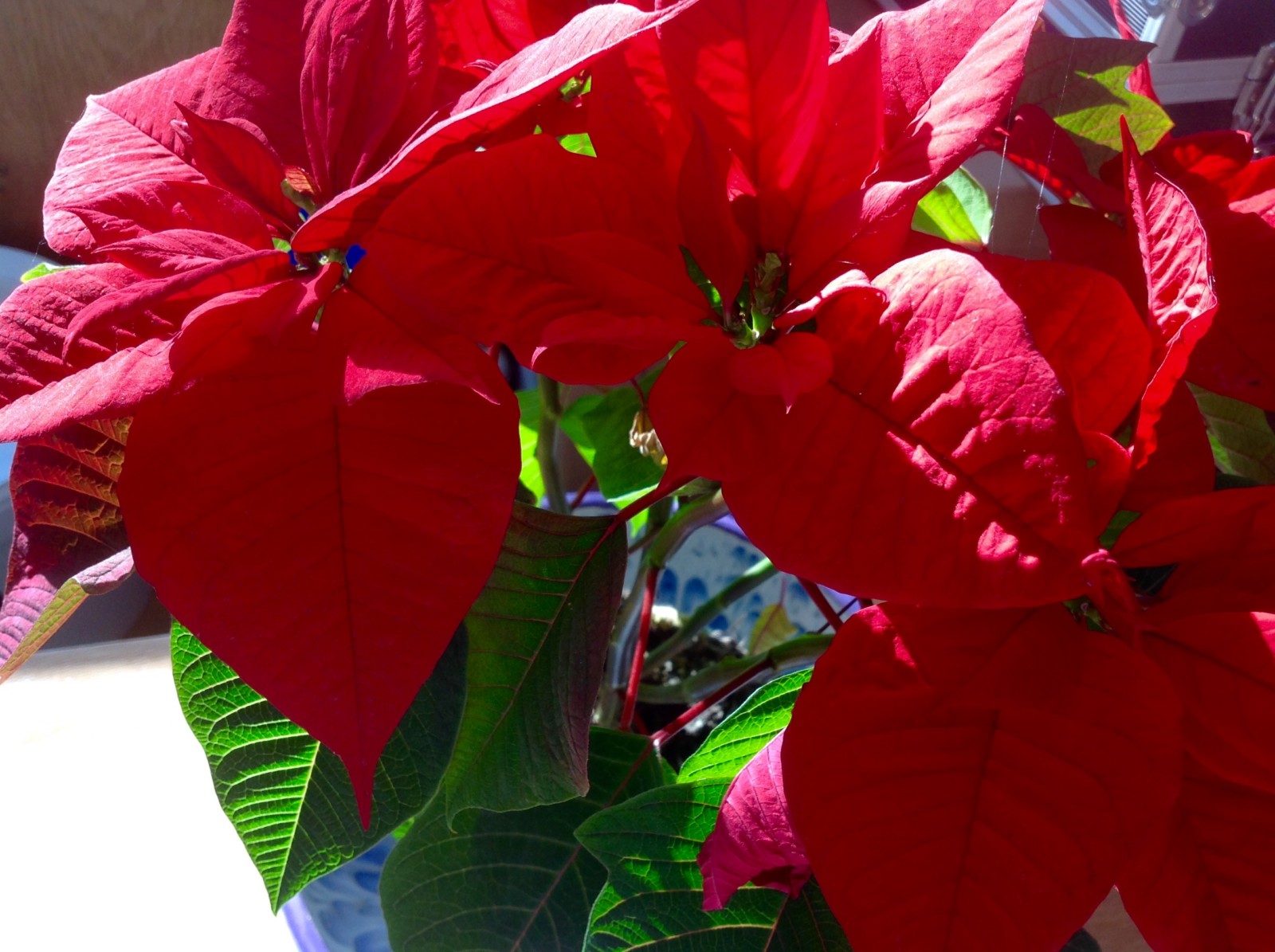 Blooming fat demo’s? Well not quite! I’ve got three separate things to report and I was just playing with the title

In the middle of December, Mike and I were walking in Eastbourne. We had a little browse round the Christmas market there, along the front. On impulse, Mike asked if I would like a poinsettia. Ooh, yes please, I said. As they were being displayed outside, on the front, on a bright, but cold, day, I didn’t really expect it to make it to Christmas. But here we are, in the middle of February, and it’s still going strong. In fact, it barely looks any different to when we brought it home! That’s a good value plant!

Last night, instead of being tucked up with husband and enjoying something good that we’d cooked, I drove to Mayfield at 6:30. The WI there had asked me to give a cookery demo on living on £1 a day. Their speaker selection person asked me last autumn and I didn’t realise that the date that was wanted was Valentines. I was a bit peeved when I found out, but I had said I would do it, and do it I would.

I’ve also got to the stage when I’m not overly keen to go out at night. Not because of any health issues or anything, purely because I CBA! Nevertheless, I spent most of the day sorting out what I had to take and doing a bit of prep and went off up there. I am really glad I did too. They are a lovely bunch and I had a great time. I was speaking for about 45 minutes and whilst chatting and talking about the site, how it started, the media exposure etc etc, I cooked. I made a Bacon and Sweet Corn Pie. Did that first as it needed to cook in the oven. Then I made Chicken and Sun Dried Tomato Paste and sent that round to taste on pieces of crusty bread. After that, I fired up a double ringed camping stove and made Peanut Noodles and Goan Chicken Curry. And we finished off with Raisin Pancakes. Everything was well received and there were lots of questions at the end, always a good sign.

Struggle as I do in my efforts to lose weight, I read a lot of books and literature around the subject. Like most dieters, I have struggled and tried, lost a bit, gained a bit, eaten low fat or low carb or very low calorie,  counted squillions of calories. It’s all generally done my head in as I’ve tried and tried and got nowhere at all.

This week, I’m reading a book I bought a little while ago called The Obesity Code. It was written by Jason Fung who is an American doctor. He approaches things in a similar fashion to Michael Mosley in that everything he says is evidence based.

And my goodness, he is certainly making me think! His contention is that obesity is caused by our hormones rather than lack of self control. He says that overproduction of insulin in the body is the root cause of obesity and obesity-related illnesses, including type 2 diabetes, and offers robust scientific evidence that reversing insulin resistance is the only way to lose weight in the long term.

He says that the way to lose weight is

1. Minimise consumption of added sugar. Make breakfast optional (only to be taken if hungry) and three meals only, never snack.

5. Increase your consumption of protective factors – fibre and vinegar

He describes the process of how dieting means you are constantly hungry. I have complained about this many times and how hard it is to stick to a calorie total when I’m never not hungry.

He describes how your body will adjust to however many calories you give it. Last year, I was working out at the gym and eating what they told me, starting at almost 3000 calories and working down to 1500. Nothing much happened.  I didn’t get fatter at the higher end and I didn’t lose much weight at the lower end either. It has been my lifelong experience that my system adjusts, within two or three weeks, to whatever my lastest regimen is.

But I am, inevitably, hoping. I will be giving it a go. I had already decided that fasting as in 5:2 was something I wanted to do for the health benefits independently of any slimming benefits. This week, I have been semi fasting since Monday and am very hungry indeed. I had been toying with the idea of fasting during the week for some time. Semi fasting as I have been so hungry that I haven’t quite managed the 600 calories I am aiming at. I don’t know how long I’ll be able to do it, but we’ll see and I’ll let you know of any good effects.

Edit: I’ve found that Jason Fung has a blog, so I’ve signed up. The first couple of posts that I have just read made sense to me because I have been reading his book and he is talking about the same things as he has in the book. If you dive straight into the blog, you may find it a bit confusing at first, but it should fall into place after a while