A couple of days ago, I made a variation of the pie using oil pastry. This is in fact, more or less, the original pie where I first made oil pastry on cheap family recipes, although we steamed it as a pudding there.

When I made it it was evening, so I thought I would wait to take a picture until the next day, when the light would be better. And of course, I forgot until we had eaten the other half too. So here is a picture of another pie, which looks practically the same.

As I did for the pizza, I took the 454g of meat after we had had our roast lunch, and added an estimated 200g of meat for that. So a total of 654g of chicken meat divided by the £4.99 cost, disregarding anything from the stock completely.

Prepare the pastry using the oil method . To do this, put the flour in a bowl, tip in the oil. Then add the water. You may need a little more, or a little less, all flours are different. Simply stir gently with a tablespoon, and it will come together in a few seconds to make a soft dough, don’t over mix, or the pastry will toughen. If it is looking a little dry while you stir, add a little more water. If too wet, add a little more flour.

For the filling, saute the onion until transparent. Chop the chicken into small pieces and add to the pan, together with the gravy and the chopped up stuffing balls. Stir it well and season if necessary. If you don’t have any gravy available, add a little water to make some sauce. Leave the mix to cool.

Meanwhile, divide the pastry into rough halves. One half needs to be slightly bigger than the other. Using the bigger half, flour your work surface and roll out to fit a 20cm pie tin and line your tin with it.

Put the chicken and onion filling into the pie tin. Roll out the other piece of pastry and top your pie with it. Make a steam hole and bake in a medium oven for about half an hour.

We had this with sweet potato mash, carrots, broccoli and cauliflower.

If you like steamed puddings, this can be done exactly the same, but use a pudding basin and steam it for 2 hours. I would do that in a slow cooker to save the fuel.

Any meat can be used in place of the chicken. Turkey for instance, or pork mince. I will do the variation with mince and onion sometime soon, that turned out lovely.

The same day, I used half the chicken stock I made earlier to make a spicy lentil soup. The other half of the stock is in the freezer to use for risotto. The remaining chicken is also in the freezer, divided up and labelled with the planned use.

Saute the vegetables until the onion is transparent. Add everything else and simmer for 20 minutes. Whizz if you want to, I usually do.

Again, some was eaten, and the remaining portions divided up and frozen for later use. 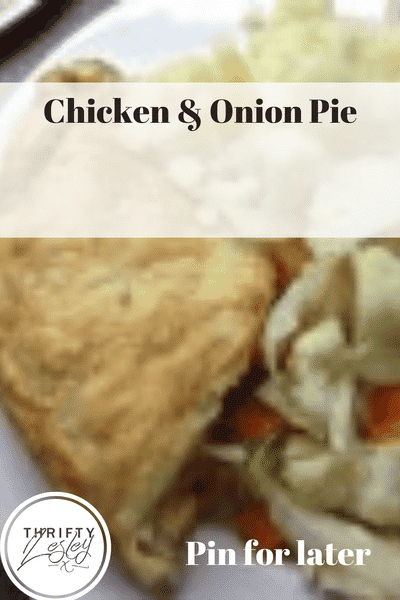