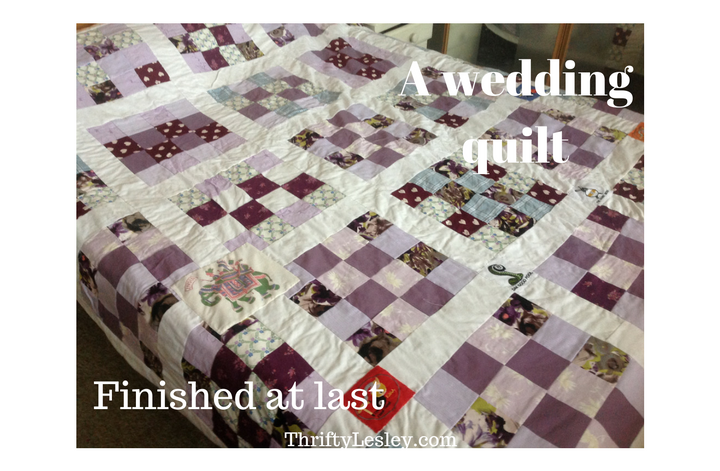 My daughter got married in June 2015, and as part of her wedding gift, I thought it would be nice to make her a quilt with a purple theme, like the wedding theme.

I found some dark purple fabric leftover from making a skirt and one of her Dads shirts, and went hunting at a boot sale. Found lots there! A plain purple duvet cover which I used mainly for the backing, and linked it in to the patchwork on the front by using it for some of the squares. A white sheet which was earmarked for the sashing and the border round the edge. Then I found a dress with white hearts on a purple background which I really liked, and a length of fabric with a creamy pattern on a violet background. Finally, I unearthed some fat squares that had a floral motif, with a touch of purple in it.

I got to work cutting out the squares and sewing everything together. But there’s a lot of work involved in a wedding, even if my daughter was doing most of it. Plus, of course, we were getting married ourselves in the August of the same year. And of course life gets in the way of many plans. So the project dragged on and on, staring at me from the corner, whispering at me ‘you should be finishing me you know’ and ‘do you know how much time has gone by from when you started me’ .

I finally completed the top and tackled gluing all the layers together before quilting it all. But, as detailed in an earlier post, I had used carpet glue instead of the mild tack stuff I was intending to use. Eeeeeeek! It ruined the back, with great wet looking squiggles of glue all over it. Very, very, very luckily, the top was alright, with just the odd small squiggle. I can’t tell you how pissed off I would have been if I’d ruined the top! 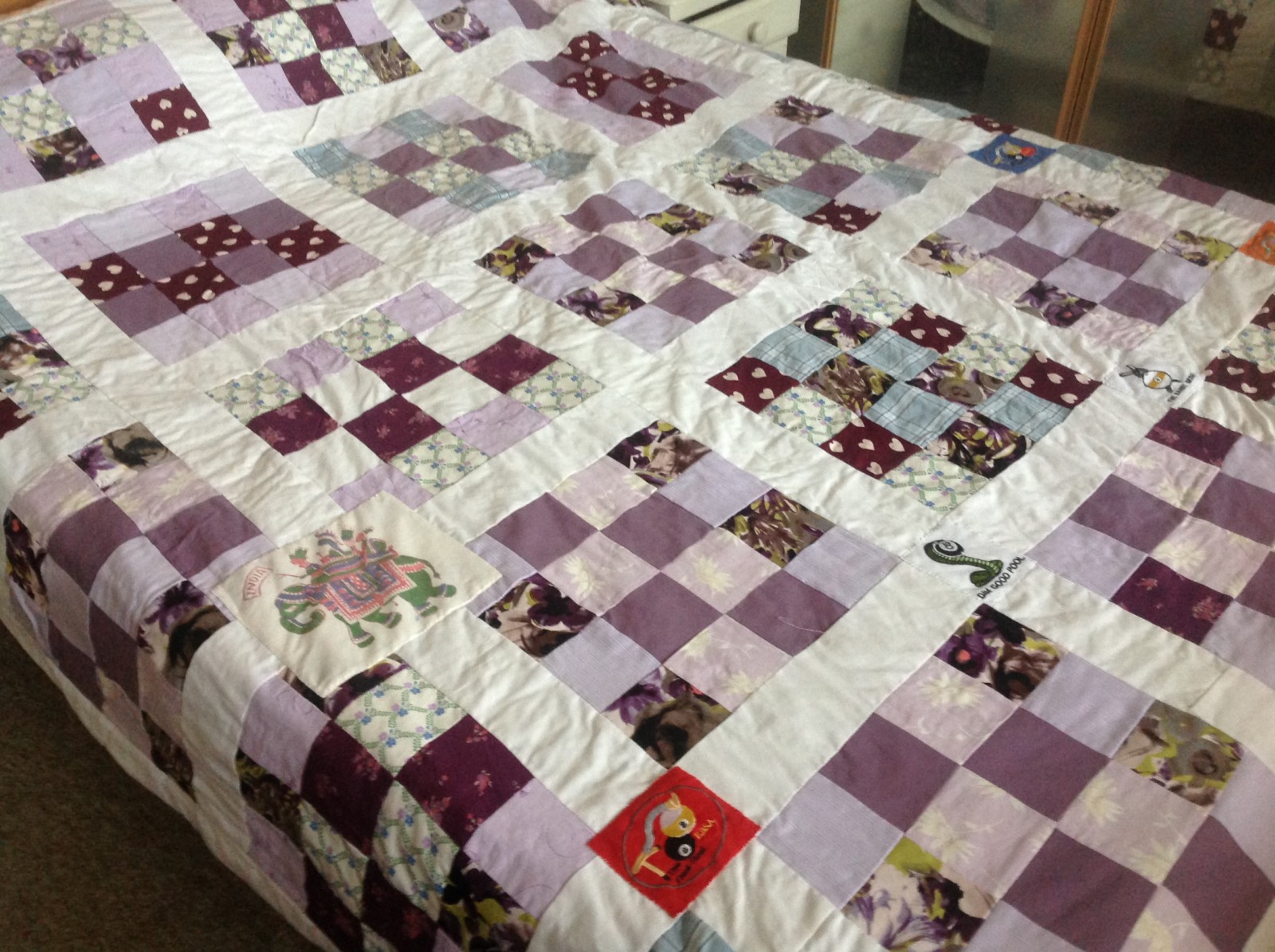 So I had to put another back on it. Fortunately, I still had almost enough of the purple quilt, just had to add a border using the white sheet to make it big enough.

Still, on the positive side, I didn’t have to spend ages quilting all the layers together, no way is that sucker ever coming unstuck!

My now son-in-law is a whizz at snooker and a bit of an inventor and he wanted a few items on the quilt reflecting that. Earlier in the year, they went to India on a fabulous holiday. They made a batik of an elephant and that’s has gone on there too.

I’ve got a little video of it so you can see more of it, but I can’t get it to load right now. I’ve tried loading to YouTube, but it won’t go. It’s on my Instagram if you want to see it there. I’ll carry on trying and update it here if I ever work it out.

Edit: I’ve discovered that you can’t load videos to YouTube from an iPad. So did it on the laptop, and here it is

I am very pleased with how it has turned out, pretty much how I imagined it right back at the beginning.