Things you may never need to buy again – mustard

Things you may never need to buy again – mustard 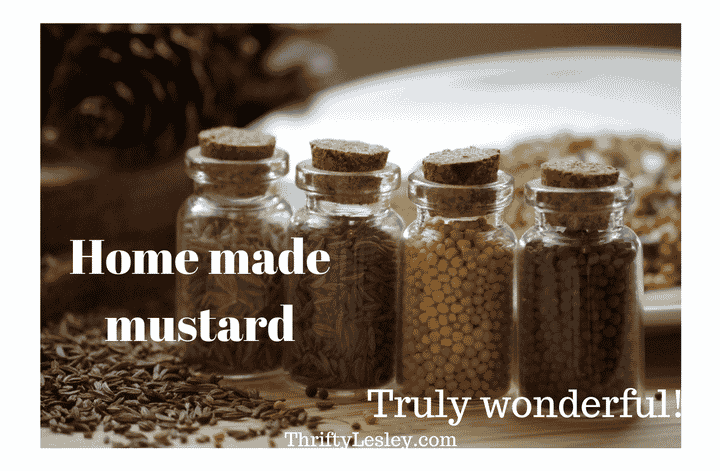 Home made mustard? I occasionally buy lovely mustard from local artisans when I go to agricultural fairs and food fairs. I’ve always thought that it looked like it might be easy to make. But, until this month, I haven’t ever done anything about it.

Well, my goodness, recipes don’t come much simpler than this! Assemble the ingredients in a small dish, ignore them for a day or two, whizz!

But first, the science bit.

The Pungent Chemicals That Make A Difference

There is a major exception to the rule that herbs and spices provide aroma. The two most popular spices in the world are chillies and black pepper. They, and a handful of other spices – ginger, mustard, horseradish and wasabi – are especially valued for a quality often called hotness, but best called pungency: neither a taste nor a smell, but a general feeling of irritation that verges on pain. Pungency is caused by two general groups of chemicals. One group, the thiocyonates, are formed in mustard plants and their relatives, horseradish and wasabi, when the plant cells are damaged. Most thiocyanates are small, light, water repelling molecules – a dozen or two atoms – that readily escape from the food into the air in our mouth, and up our nasal passages. In the mouth and nose they stimulate nerve endings that then send a pain message to the brain. The molecules bind to particular receptors on certain sensory nerves and essentially cause those nerves to become hypersensitive to ordinary sensations of irritation or pain.

A few mouthfuls of a dish containing lots of thiocyanates and we become conscious of simply breathing: our mouth becomes so sensitive that exhaling body temperature air feels like a textured hot bath, inhaling room temperature air like a refreshingly cool breeze.

The hot compounds must be released from the seeds by soaking or grinding. These compounds are sensitive to temperature, so for the hottest mustard, use cold liquids. To temper the heat, use a hot liquid. This sensitivity explains why mustard seeds popped in a hot pan when cooking do not give any heat to the finished dish. 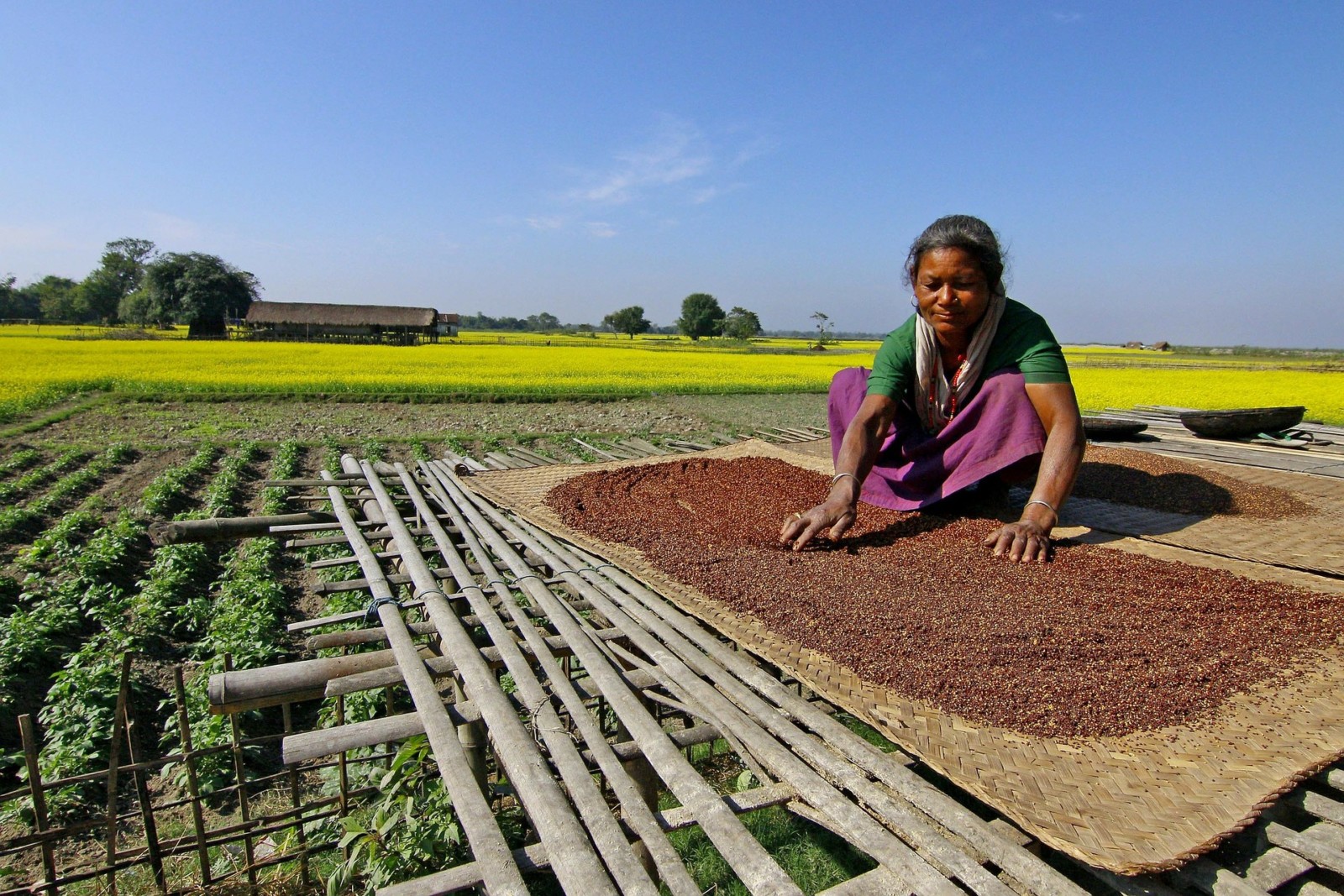 The three different mustard seed types have differing properties. Black mustard has a high level of the defensive pungency compound, sinigrin. But is inconvenient to farm and has been largely replaced by brown mustard. Brown mustard also contains sinigrin, but significantly less. The white or yellow mustard contains the compound sinalbin which is much less volatile than sinigrin and is consequently less pungent than the black and brown varieties. So the three different mustard seeds available will all make differing mustards.

Although the liquid used can be simply water, the mustard will rapidly deteriorate in flavour without an acid to stabilise it. The acidity slows the release of the flavour compounds, but also preserves them.

This is the method I used the first time,  although there are many others
25g yellow mustard seeds, 25p from supermarkets, much cheaper elsewhere, eg Asian shops
40ml cider vinegar, 14p
25ml cold water

Put all ingredients into a small container and leave to soak for 24 to 48 hours. After that time, tip the mixture into a deep and narrow container and blitz with a hand blender. Season well with salt and pepper. Taste – just a little it’s very strong right now. If you want some sweetness, add a tablespoon of honey, maybe even two. Stir in thoroughly.

This makes a small pot of mustard. I whizzed this mustard  in an almost empty cream pot, hence the creamy colour. 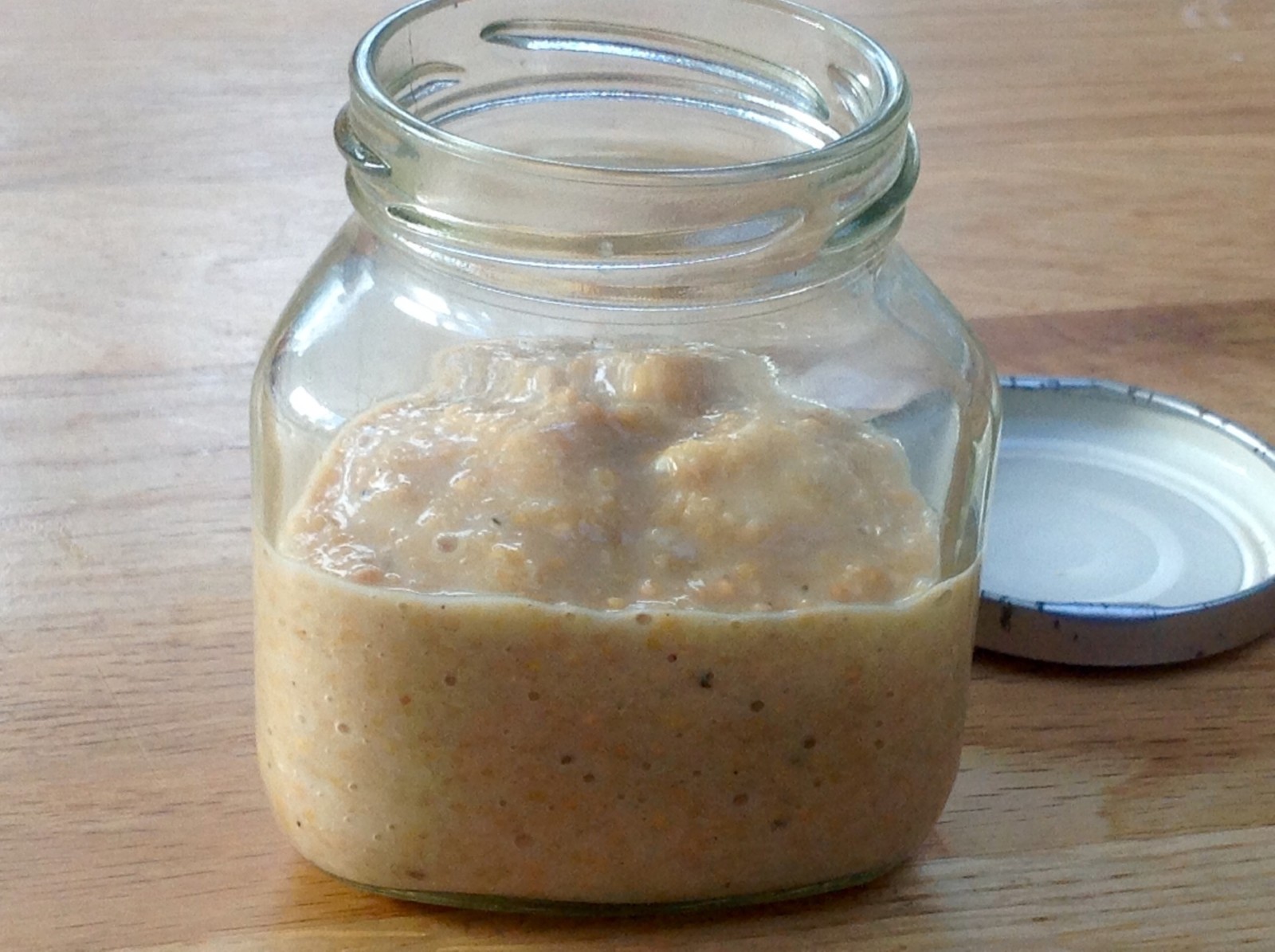 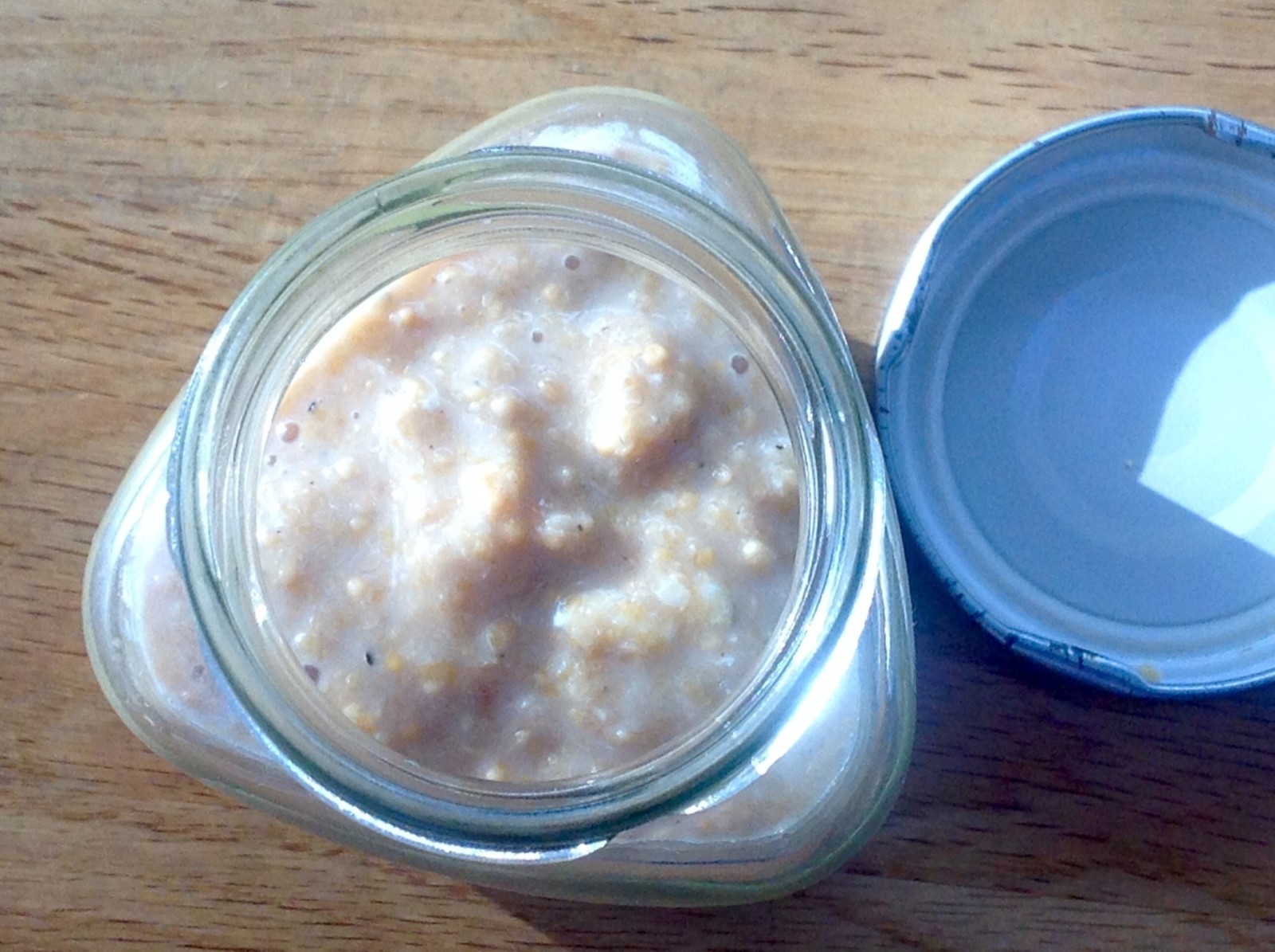 You can use your mustard straight away, and it is extremely good; powerful and with a more complex and delicious flavour profile than any I’ve bought. However I’ve found that the flavour mellows and tastes even better after the mustard has been allowed to sit for a day or two. You might need to put a little square of greasproof paper between the jar and the lid, so the lid doesn’t rust from the vinegar.

Today, I made another version

This time, I ground the mustard seeds with the salt in a pestle and mortar. Then added the sugar, turmeric and black pepper, and gave it all a good stir. 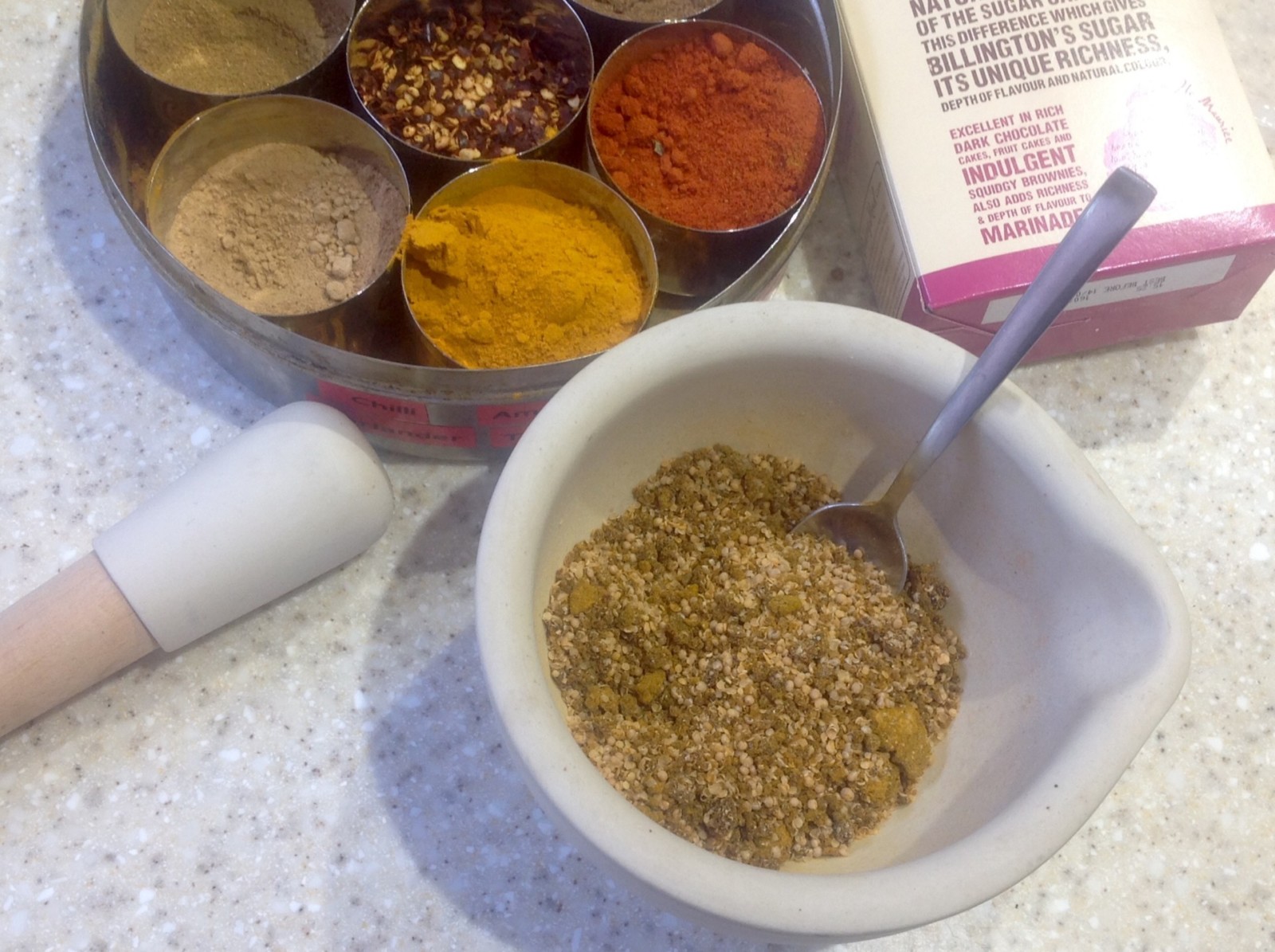 Then I added the vinegar. This was leftover from a jar of pickled onions. I keep it in the larder and use some whenever I need a spoonful of vinegar. 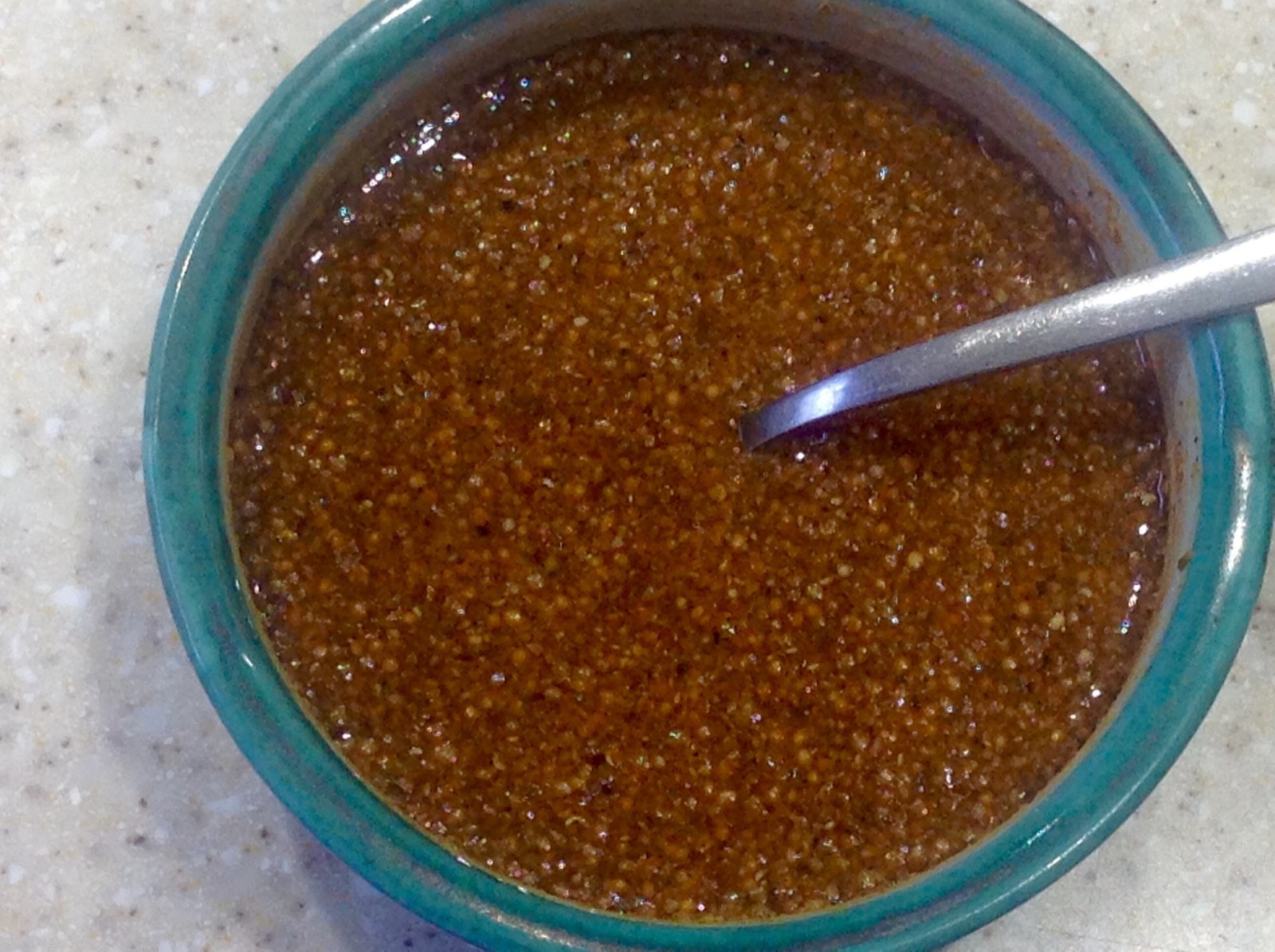 If you use a lot of mustard, you can easily multiply up the amounts and make a bigger batch, or do several different flavour variations.

I have tried the tinest bit of this new jar and it tastes wonderful already! Can’t wait to try it in a day or two when it has matured.

I used part cold water and part cold white wine vinegar as the liquid in the first batch, and all cold pickled onion vinegar in the second batch. The acid can be any vinegar you fancy using, lemon, lime or grapefruit juice, grape must or fruit juice.

The liquid can be water, beer or lager. Or dispense wth the liquid altogether and use all acid.

I like a bit of sweetness in mine and used honey in one and muscovado sugar in the other. I would also use ordinary sugar or palm sugar, all supplying differing flavour notes.

Then there are herbs. A good spoonful of fine chopped rosemary would be lovely. Lots of shredded sage or thyme too.

Spices too can be added to mustards. Turmeric most commonly, but anything else that you want to use, like a curry powder. Experiment and see what you prefer.

Asda is selling various mustard at 55p for around 180g at the cheaper end, value is even cheaper of course. And the fancier ones are £1 for around 220g. So you’re not going to save masses of cash making this, even if you get your mustard seeds very cheaply. However, the taste is outstanding, and you can make little pots to put in gift hampers, which I think is much nicer than something bought.  Plus it’s fun!

Many thanks to the book On Food And Cooking by Harold McGee for the science info. It’s a fascinating book to dip into and I read bits and pieces from it frequently when I’m investigating something.