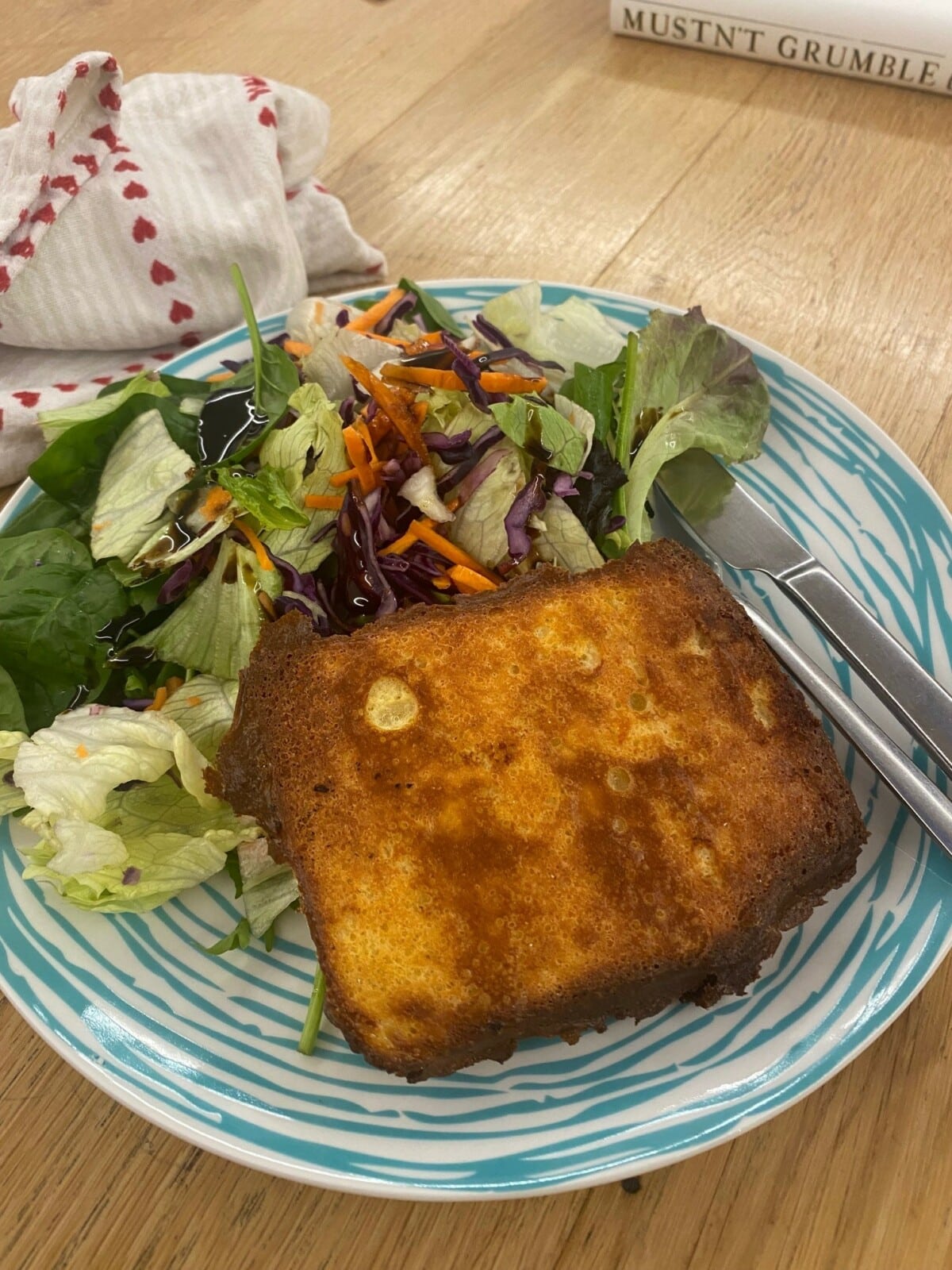 I went to a Cookalong recently where we all took a different soup. I tasted 10 soups that day, which was fabulous! All of them very different.

One of the members also brought Mary Berry’s Wonderful Soufflé Croûtons, which truly were rather wonderful. I can’t find a link for them that is Mary’s, plenty of people using the recipe though!

They were very moreish and I got to wondering, as I do, if I could make a dinner using them, rather than just a nibble.  I decided that if I made them as a slice, rather than cubes, it would work very well for dinner, although a pile of cubes would also be rather luscious.

It worked really well and made a rather fabulous dinner!

How Do I Make Soufflé Croûton Slices

For 4 people, cut 4 x 1″/2.5cm slices from a loaf that is 2-3 days old. I cut the crusts off as recommended in Mary’s recipe, but for a full slice like this I wouldn’t bother next time.

Mix together soft cheese, butter, grated cheddar and melt over a low heat. Add in a couple of well beaten eggs.

The mixture will look pretty curdled, but it doesn’t seem to matter.

Now dip each slice of bread in the mix and make sure all sides are covered. Place on a baking sheet.

You can freeze at this stage for about a month. Bake from frozen allowing 5 minutes extra.

Bake in a hot oven for about 15 minutes, turning over halfway through.

Once puffed and golden, serve immediately with a side salad of dressed leaves, or slices of tomato and red onion.

They are deeply savoury, crispy on the outside, soft on the inside. Very moreish, so you might like to make a couple of extra slices!

From the recipe card quantities, I got 5 slices and a tray of bites too, which I froze, ready for snacky time some time in the next month. The tray was an extra 2 slices of bread, so 7 slices in all. I wanted to use up every scrap of mix, no surprise there! 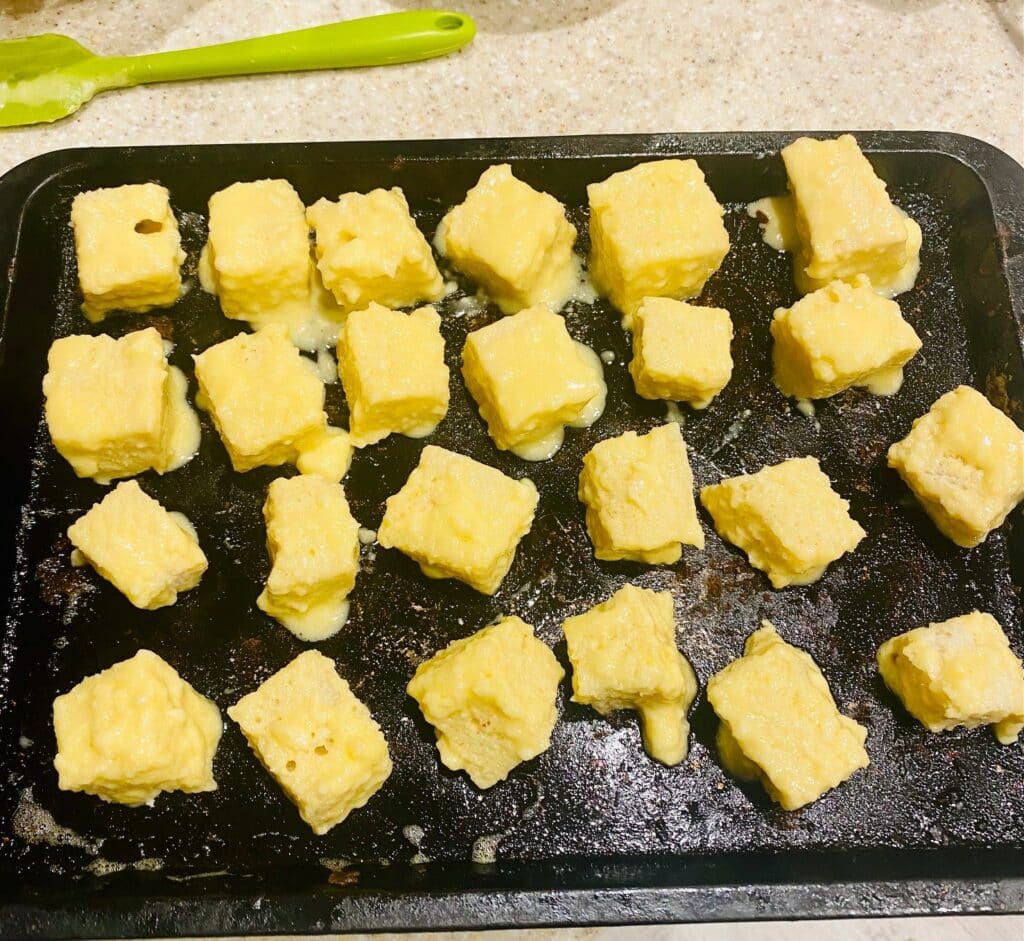 A tray of cubes all ready to be frozen. There are 2 slices of bread there.

And here they are all crisped up and gorgeous. Me and my husband had these for a snacky tea and they were flipping gorgeous! 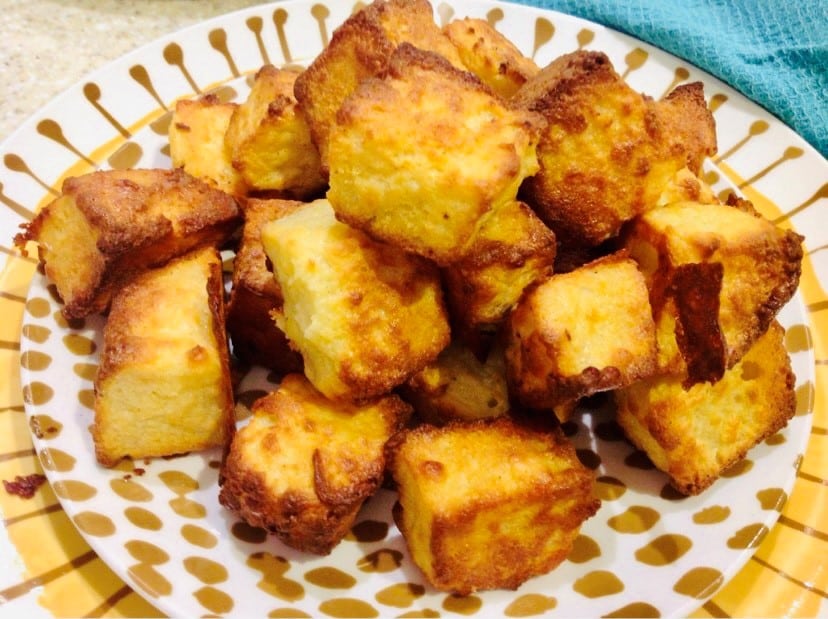 I made 2 slices each for dinner, as 1 didn’t feel like enough, but 1 was plenty, wouldn’t have been able to manage 2. So the 2 extra cooked ones were put to one side, and the 1 uncooked one went in the freezer for future meals, along with the cubes.

You need to open freeze first, before wrapping and bagging.

I had the extra cooked ones for lunches on the next 2 days and heated them up with 2 minutes in the toaster which worked really well.

This was an unusual and very tasty tea. We had salad leaves with ours, with a drizzle of balsamic. They would also make a delicious lunch, breakfast or brunch, perhaps with a poached egg and some bacon.

Do have a go at these, they are very scrummy, and really don’t take much time to make.

What Changes Can I Make?

The original recipe was for the smaller size of croutons. If you want to do those, cut each slice into 1″/2.5cm cubes and it’s probably best to remove the crusts if doing the cubes. Dip in the same way, baking for 10 minutes.

The original also used 2 egg whites, but I can’t be doing with bits of egg hanging about in the fridge, so I used 2 whole eggs, well beaten to a froth. 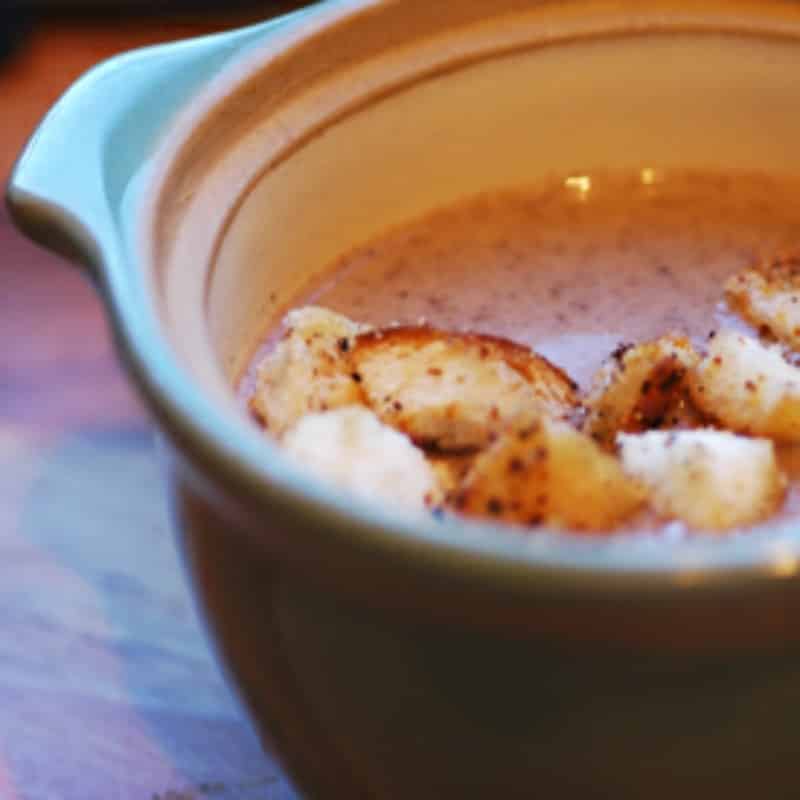 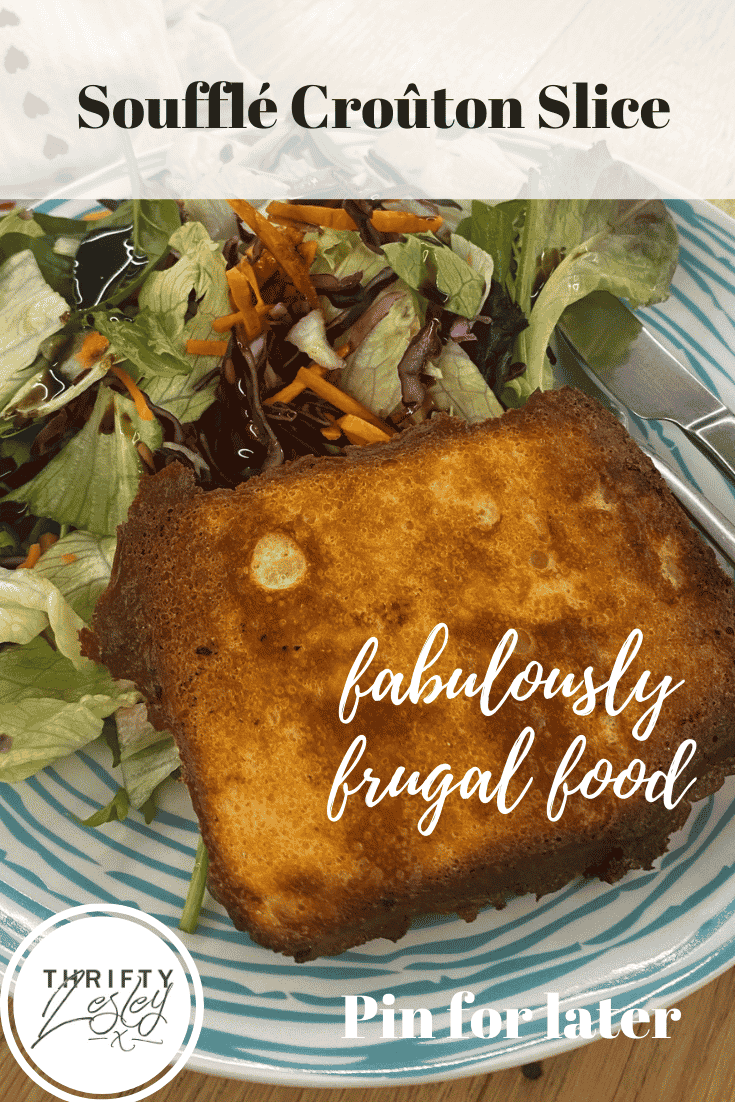 Vegetarian
Servings: 5 slices, plus a tray of cubes
Cost per portion 28p
Calories: 511kcal
Author: Thrifty Lesley
Click on the check box to cross off Equipment, Ingredients or Recipe Steps completed.
If you click and buy anything, I may get a small commission on the purchase. It won't cost you anything extra. Some are just things that I like and/or use myself rather than necessarily best value 🙂
If you enjoyed this recipe, would you please consider leaving a review? It would really help

you can substitute a strong and mature cheddar for the parmesan