Roasted Vegetables in the Hole, 43p

Roasted Vegetables in the Hole, 43p 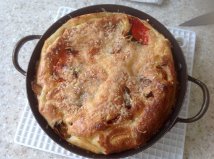 Arrgh, the pictures simply won’t size properly, it’s driving me nuts!
Doing some gardening today, I pulled up a self sown Pink Fir Apple potato that was in the way of the spinach and it had several little potatoes on, so I had those with my lunch. They were really really nice! I didn’t have much luck with the potatoes last year, but this year they are appearing everywhere!
This evening, I am trying something new. Do you remember when I went to The Squirrel Inn recently? I read one of the cookery books they have propped on a window sill while we were waiting and found a few things that I filed away for future use. Well, this is one of them.

Peel the onion and garlic. Chop the onion into small pieces, not as if you were chopping it to fry, larger than that. Peel the other veg if you like. Cut up the vegetables into medallions or similar, small pieces. Toss in a little oil, salt and pepper. Roast in a hot oven for about 20 minutes, or until they are tender and cooked through.

Meanwhile, mix the batter ingredients together, whisking well, then set aside. 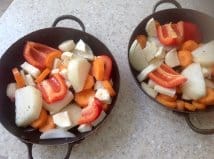 When the veg are nearly cooked, put the dish that you want to cook the finished dish in, in the oven, with a splash of oil in it. Heat it until it’s very hot. Take it out of the oven, and immediately pour the batter in, tip the hot vegetables on top, and whip it straight back in the oven. Don’t delay even for a few seconds, the batter must sizzle as it hits the dish and must still be sizzling as it goes back in the oven. 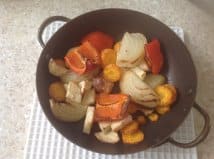 Now cook in a hot oven until the batter is crispy and golden, at least 20 minutes, maybe half an hour. Serve immediately.

DP wanted a bit of parmesan on top, but I don’t think it worked very well, so I’ve left it out here. I also poured the batter over the veg, rather than the other way round, but I think it would work better this way.

You can use any vegetables that will roast well, and maybe with other additions too. How about the classic beetroot and feta, with some rosemary sprigs on top to go crispy. Swede, parsnip and onion for a real winter version. Butternut squash, onion and crispy sage.  Red pepper, fennel and onion.

It would even work with a sweet version. Put a couple of teaspoons of sugar in the batter and use apples caramelised in butter and a little cinnamon. Raspberries. Plums and mixed spice. Cherries from a jar – we’re definitely in clafoutis territory now. Serve any of the sweet versions with some cream. Yum 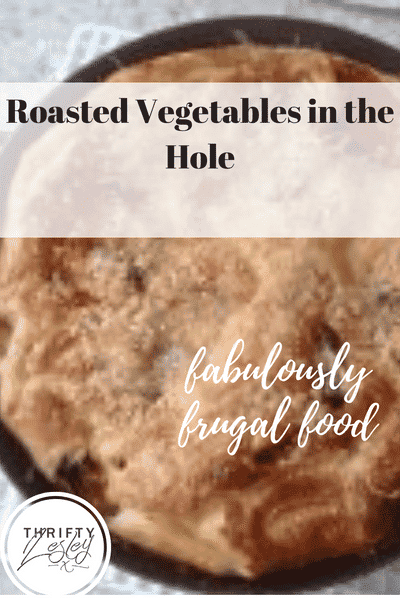