A reprise on semi-freddo, and lots more flavour ideas

A reprise on semi-freddo, and lots more flavour ideas 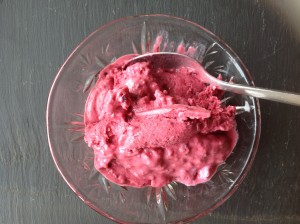 After dinner this evening, DP announced that he wanted a pudding. He was angling after a crumble, but I really didn’t want to make one. So I dug out a bag of mixed berries from the freezer, picked out all the strawberries and whizzed them in the food processor with the last of the yogort and a couple of spoons of sugar.

Result….instant strawberry semi-freddo and one happy DP. You can make it with absolutely any combination of berries that you like. To firm it up a bit, or keep it for later, just pop it into a box and into the freezer. If it is in there long enough to go solid, let it defrost for about 20 minutes in the fridge before eating.

As well as the variations on the original post, some more occur to me. Here we are in elderflower season, with the gooseberries ripening rapidly. You could either add a little sprig of elderflowers, or a glug of elderflower cordial.

I am wondering if a chocolate version would work. I’m going to try either some melted value chocolate, or some cocoa powder. I bought some glorious cherries from a roadside vendor this week. A Black Forest version of chocolate with a cherry compote added when you’ve finished stirring would be fabulous.

Orange zest could be added to a chocolate one too. Or you could use white chocolate and some raspberries from the berries bag.

Any of the versions could be stretched with a little biscuity thing. So a shortbread, crisp and buttery, or flavoured with something that goes.
Black Forest with an almond biscuit
Chocolate orange with an orange zest biscuit
Gooseberry and elderflower with a buttery or elderflower biscuit
Rhubarb with a ginger biscuit
Chocolate with any nutty biscuit…. almond, Brazil, hazelnut, salted peanut or salted cashew
Ooh…I’ve just had a thought, I bet Nutella (meaning of course, the value equivalent) would be fantastic in the semi-freddo, and or spread on a biscuit to go with it
Approved Foods often do tinned fruit really cheaply. I have lots of tins of broken mandarins that I acquired for 12.5p for instance. And my last order included several tins of apricot halves. Either of those would make a lovely flavour.
Or there are always the value tins of peaches or pineapple available in most supermarkets.

What flavour would you have? 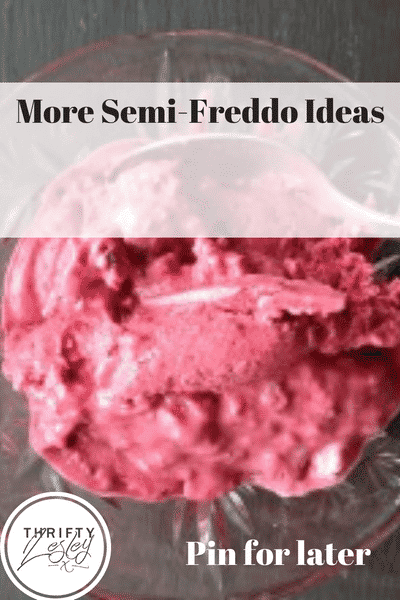