I have 3 under counter sized fridges, 2 of which are supposed to be overflow ones, and not turned on most of the time. Such is my lack of discipline, that until recently all 3 of them were packed to bursting. I have now managed to reduce the third one down to a third full. Just as well, as it isn’t very efficient and is only supposed to be used for when I cook and freeze meals for other people, just switched on for a few days.

I took an inventory this morning of what is supposed to be the only one we use all the time, the one in the kitchen (the other two are in the loft).

There are 3 bags of various red berries in there, and a third of a bag. So while the turnover was cooking, I got the food processor out and put the third of a bag in there, still frozen solid, along with some basics yogort – about a teacup. Then I whizzed the still very frozen fruit with the yogort until it was amalgamated. There were still pips in there, but I like that. You could always sieve them out. It took a few minutes to become smooth. On tasting it was just a bit too sharp, so I put in a couple of tblsps of sugar. Then put it in a pot and back in the freezer.

We had half each as pudding at lunchtime, it was still only half frozen, (which is all that semi freddo means) not solid. It was still sharp, but not cheek puckeringly so and I really liked it. As I often have fruit and yogort at breakfast, I might even have this again for breakfast – ice cream for breakfast… whatever next!

the Asda bag is much cheaper at 88p for 450g than the Sainsbury’s bag I had in the freezer at £1.30/400g. Sainsbury’s is our nearest supermarket, all the others are 17 miles or so away. I try and combine a shop with a visit to DD1, near an Asda, or DD2, near an Aldi and Lidl, but it often doesn’t work out that way. And I find I tend to buy a lot of stuff to take advantage of while I’m there, and of course, the budget never actually catches up.

You can use many different fruits for this. Once the rhubarb is big enough to use, that would be wonderful. I have peeled and sliced apples in the freezer from last autumn, so I shall try it with those and maybe a spritz of lemon juice, or zest from a whole lemon if I am feeling flush. I also have some damson puree with fruit from the garden, imagine what that would be like – nom nom
If your fruit is fresh, or you have defrosted it, just mix everything together, put it in a box and freeze. Take it out and give it a good beat with a big wooden spoon every hour or so to keep the ice crystals under control.

You could add some choc chips, milk, white or dark, made from a value bar, chopped up, around 30p/100g, or some currants. How about pureed apple and cinnamon. Or you know that cake made with ground almonds, where you simmer a couple of clementines in a saucepan of water for half an hour or so? You could do that, whizz them up (remove the pips first) cool them and mix them with yogort before freezing. That would be fabulous

If you don’t have access to a food processor for all this whizzing. You need to make the fruit into a puree, or as near as. So cooked and mashed fine, or sieved. The red fruits, once defrosted, would be pretty soft. So a good mashing with a fork may be all that is needed. And if you don’t like the pips, now would be a good time to sieve them out.

When the children were small, we used to make instant jelly sometimes. They loved the fact that it was instant, and that they could make it. We used ordinary tablet jelly, sometimes with a cube or two eaten first. Put in a jug and half the required amount of boiling water poured over. Then the kids would add ice cubes for the rest of the water and give it a good stir, and before the ice cubes finished melting, the jelly would be set. 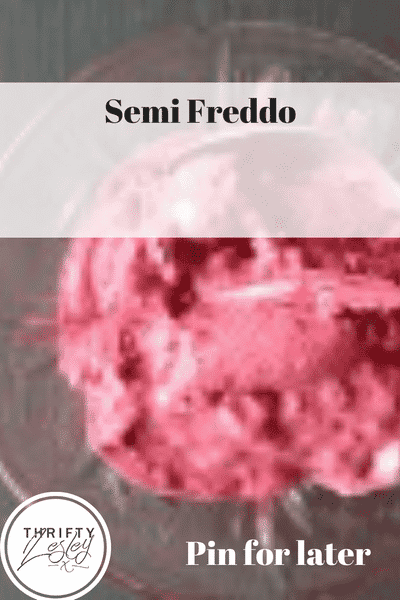