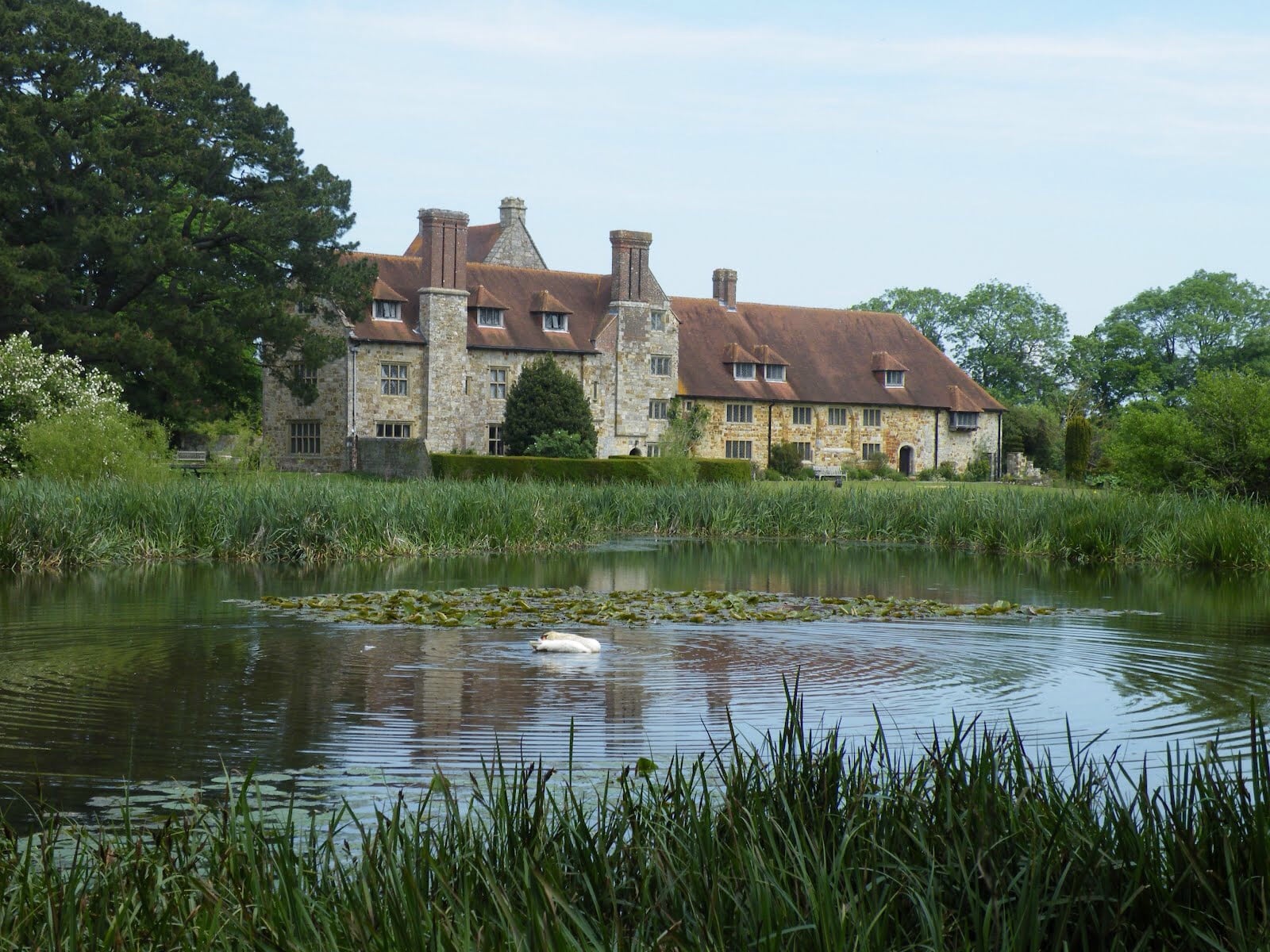 Had some of that posh rhubarb yogurt this morning, just a couple of spoonfuls as I had just got up, but needed some fuel. I just love that rhubarb purée. Khaki coloured gunk, yum! Then straight up the gym, early. Did a very vigorous workout, came back red faced, hot and sweaty, showered, got changed, cooled down, had breakfast, then straight out to meet friends.

One of them had invited a group of us to a Friends of Michelham Priory lunch. It’s a beautiful place and we were hoping to go round the garden as well, but it has been pouring hard with rain all day.

We were in a really lovely old barn with oak everywhere. There were strings and strings of little lights everywhere, all around the beams, way up in the roof. It looked quite delightful. We had a buffet lunch, which was very nice, followed by a speaker. He spoke about the Cuckmere River, which runs through the grounds of the Priory. Lots of ancient maps and he obviously loved his subject. Speakers are always better if they are enthusiastic.

We then tottered out and straight into the gift shoppe, as did most of the rest of the people there. Everybody seemed to do the same as our party. Oohed and aahed over all the little pretties on show, picking things up, turning them over, admiring them, then putting them back down and moving on round the shop. I don’t think anyone actually bought anything. Gift shoppes are pretty overpriced I think, and lovely as their stuff is, and so beautifully packaged, is it something that I actually want? No, almost certainly not. I think everybody else seemed to be going through the same thought process too.

After that, we splashed home in the rain. P was driving, so she dropped me off in the car park, next to my car. S was still chatting away, leaning out of her car window, while I searched for my car key. And searched. And searched. I hadn’t got it. Oh no!

S drove me home, where I immediately called P and to cut a long story short, my car key had fallen out of my bag and was on the floor in P’s car. So DP drove me over to P’s where we picked up the key. P wanted to talk and I was trying to back out of the door, without seeming to be rude. Them back off to the car park, and, at last, back home.

Flipping glad I located the key. It’s one of those that blip at your car and they cost a great deal to replace. Wasn’t very impressed I’d lost it either

Pleasantly tired now. Time to make some more oat cakes. I made some last Friday and we’re down to the last 2, still crispy, fresh tasting and delicious. I have coffee with a group of friends on Friday mornings and last week we were talking about oat cakes, amongst many other things. One of the ladies is a Scot and said that she keeps them in as a basic item. So I thought it would be a nice gesture of friendship to take her a few home made ones tomorrow. So I’ll do that in a bit, and make a batch big enough to top up our supplies as well.