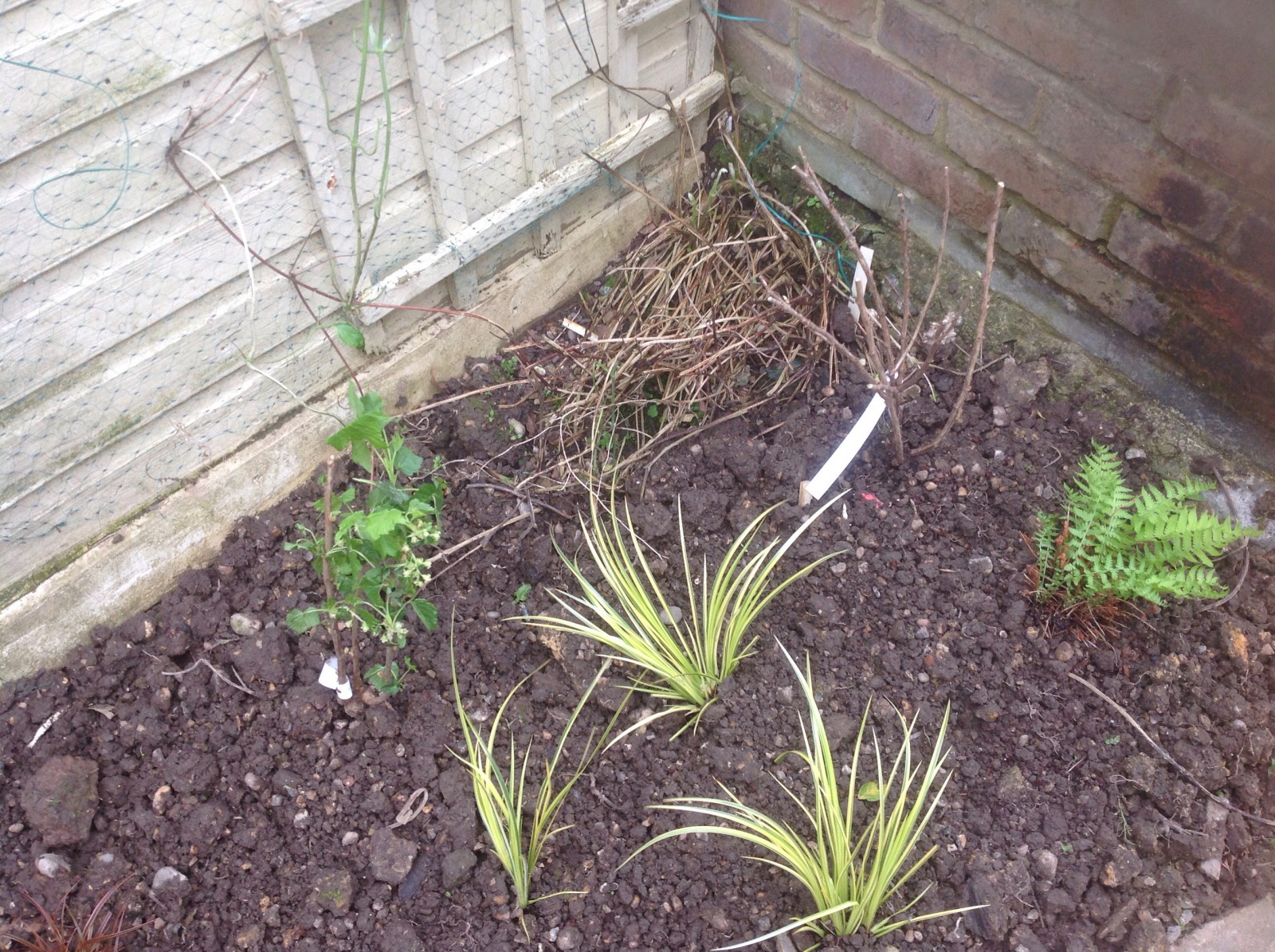 I fancied bran flakes for breakfast this morning. I had finished the packet I had been using, so got another one out of the cupboard. 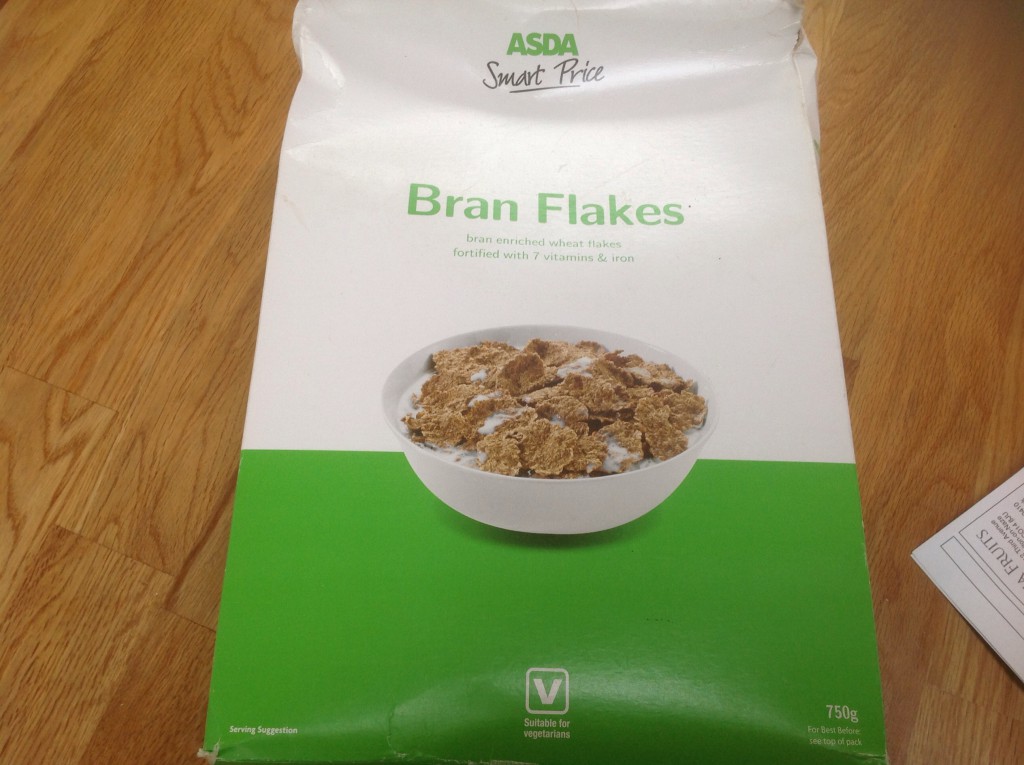 When I opened it, the flakes were horribly stale, and when I checked out the best before date, it wasn’t surprising – 1st July 2012! Only 3 years out of date! I had something else for breakfast, but that whole packet, a whole packet, of horrible flakes kept playing on my mind. So when I made something else in the oven, I thought I would see if they could be freshened up by drying them out a bit. 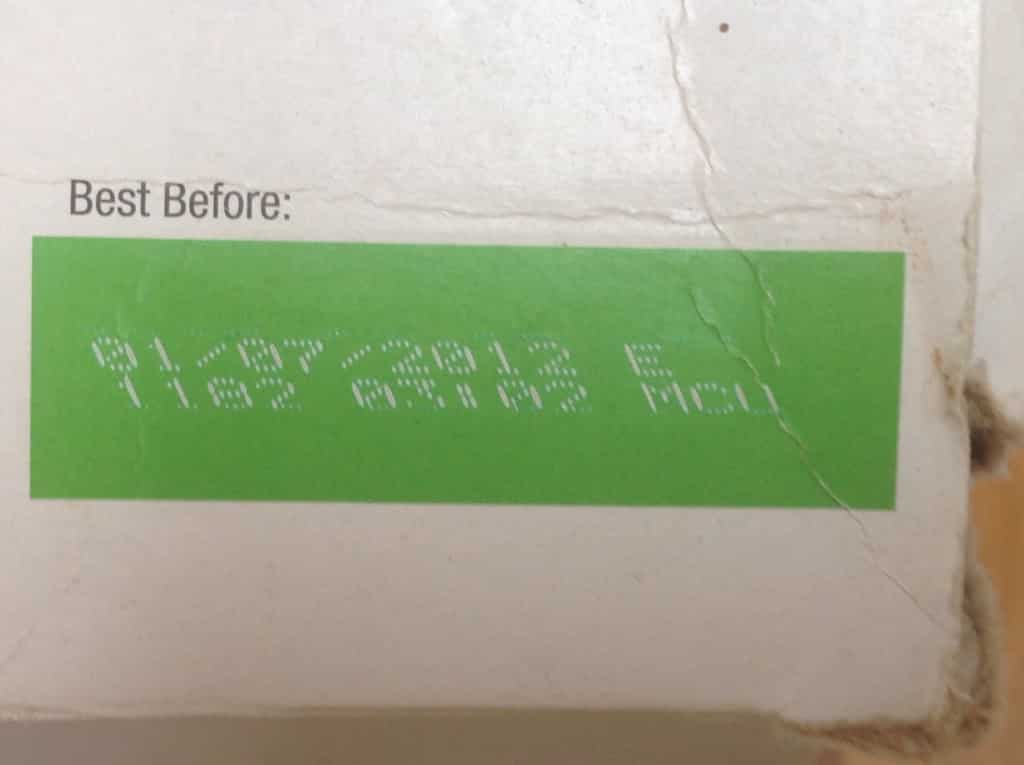 I spread them out on a tray and dried them out for 10 minutes in a moderate oven and left to cool, and, I hoped, crisp up. 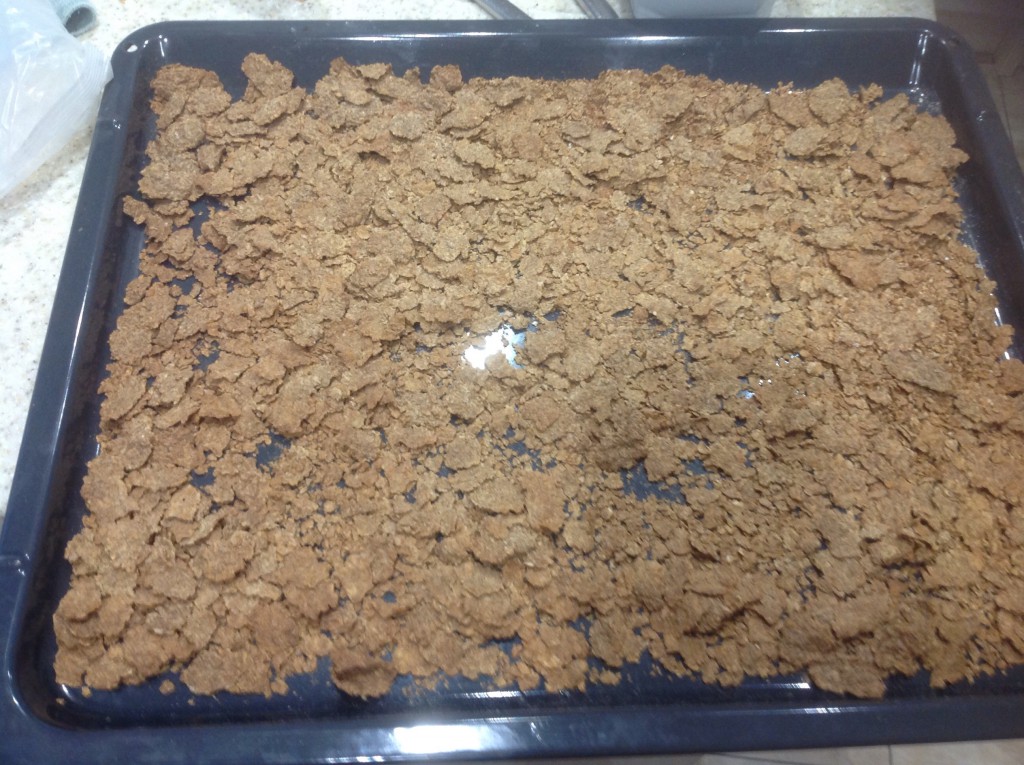 Once they were completely cool, I tried a few, and, ta dah! They were lovely, crisp and fresh tasting. So bran flakes for me for breakfast tomorrow.

Mind you, I don’t like to think about why they are still edible after all that time. I’m hoping it’s because they are a dried thing, and it’s not down to something nasty. There’s nothing in the ingredient list that looks ghastly.

After lunch I got out in the garden. Some plants I had ordered had arrived and I needed to get them in. Where we have built the extension, there is a little bed by the side of the wall, a path, then another little bed beside the shed. The shed one has been buried under all kinds of crap for a couple of years as the build wended its way slowly forward. And the other one didn’t really exist before. I can’t plant up that one yet, it’s not ready, but I’m allowed to do the shed one now. 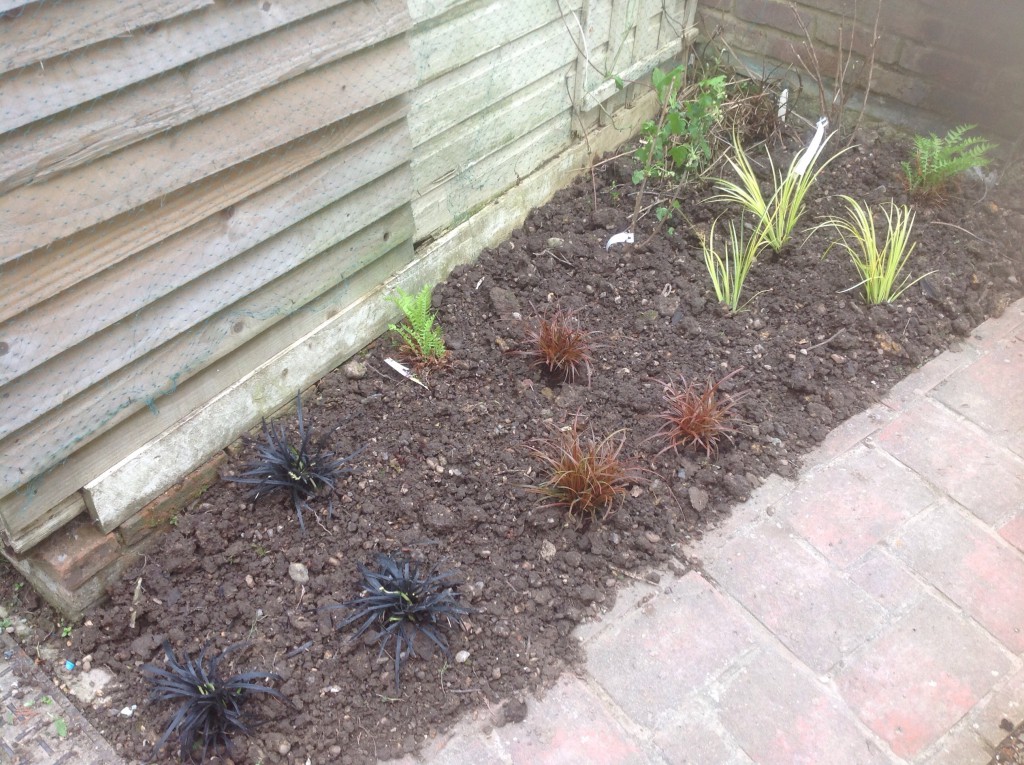 I dug it all over, sprinkled on some smelly fertiliser pellets and mixed them in a bit, then planted up. It doesn’t look much yet, but it will be lovely soon. There is a clematis with big blue flowers that lives under the greenhouse and emerges every year and clothes the shed. The red, white and green grasses will fill out and make attractive clumps, there are a couple of shuttlecock ferns. Plus I have also squeezed in a couple more fruit bushes, a red gooseberry and another blackcurrant. So that little lot will soon cover all the soil and there will be a lovely, and productive little bed. You can barely see the blackcurrant and gooseberry, but they are there – honest 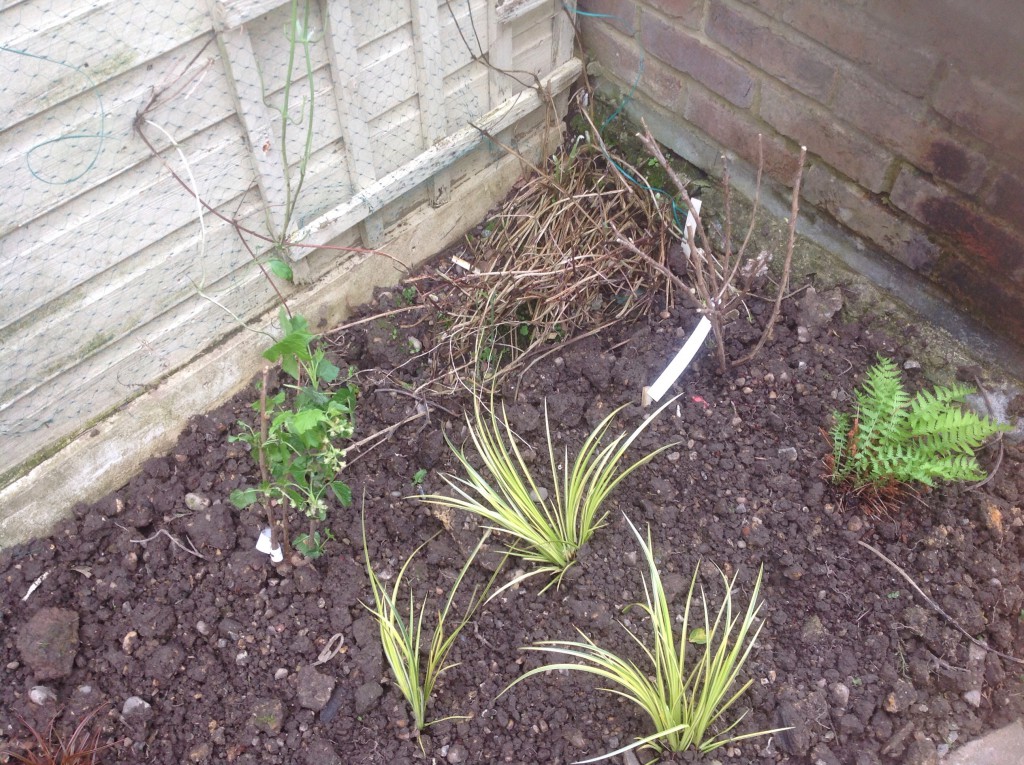 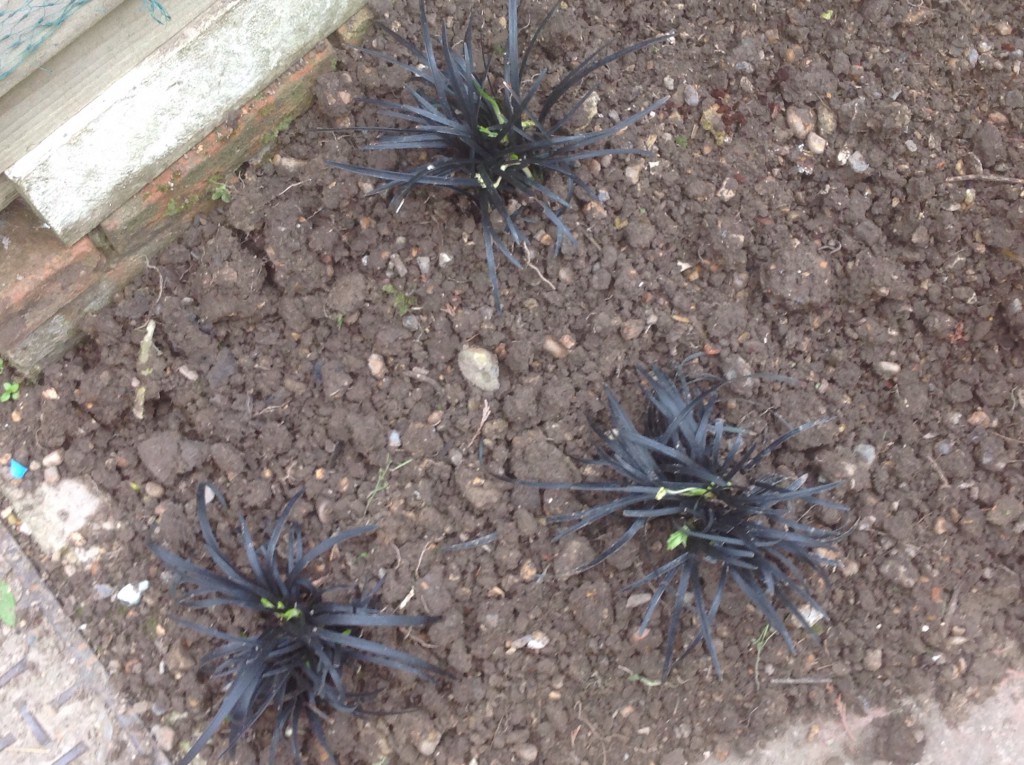 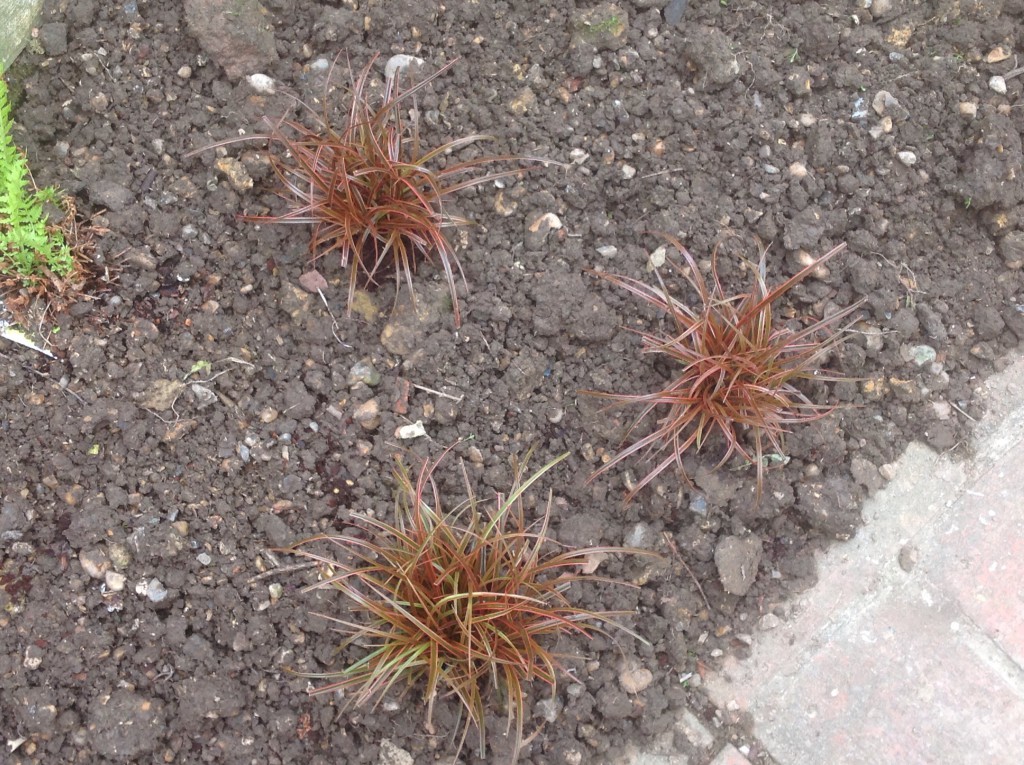