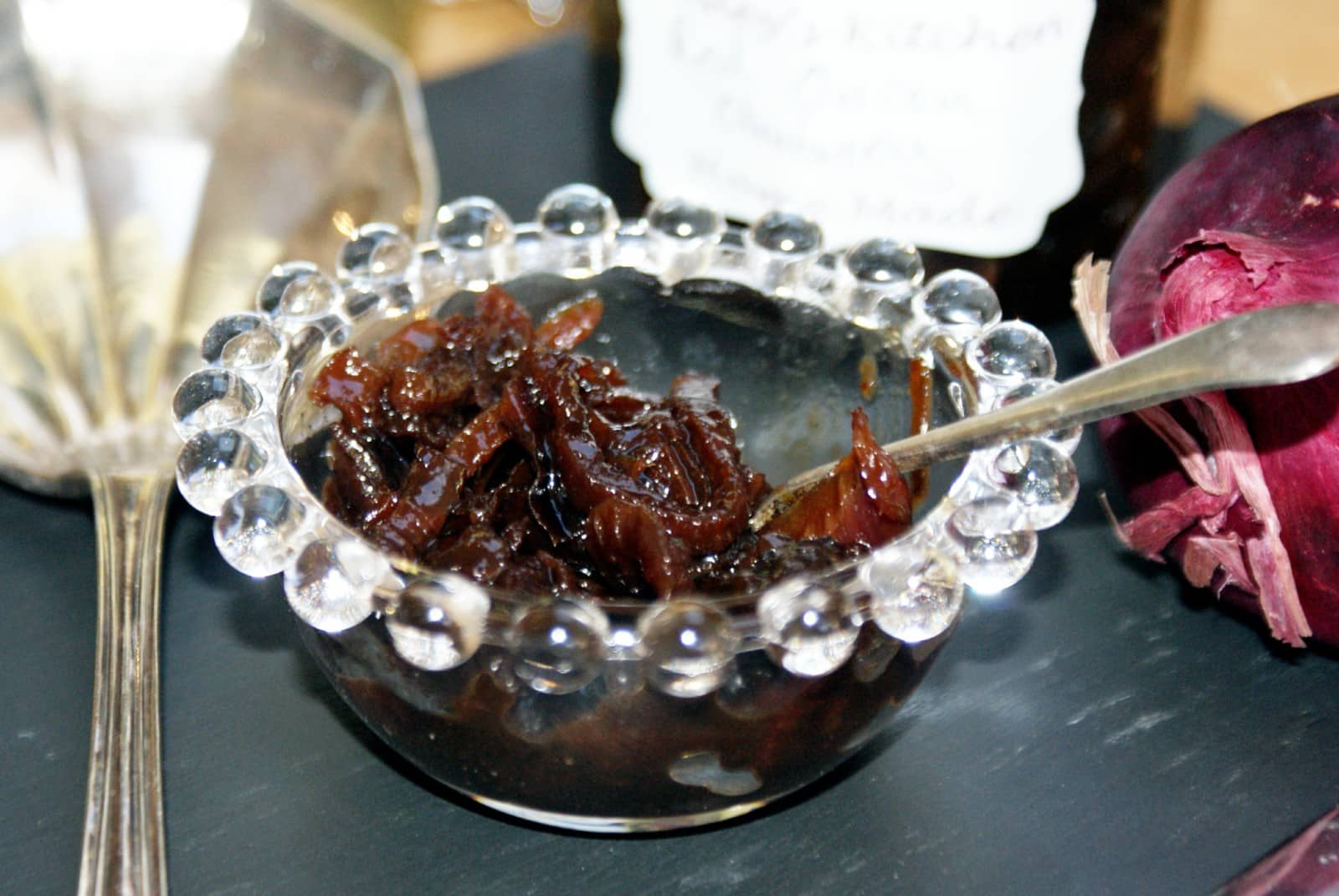 I’ve been looking at various recipes and descriptions to try and decide. I thought at first it was the amount of sugar. But no, some red onion marmalades have lots, some almost none, as do the red onion chutneys

Then I wondered if it might be the vinegar. Again, same as for the sugar. Some recipes have lots, some a little and some none, for both red onion marmalade and red onion chutney.

It was suggested in jest to call it both, but it made me laugh and it would be different, so that’s what I’ve called it, Lesley’s Red Onion Chutney Marmalade!

Tangy from the vinegars, with a sweet note from the sugar and a deep savoury flavour. Very, very good

How to make onion marmalade

Really this is a recipe about stirring. Other than chopping an inordinate amount of onions, that’s pretty much all you have to do

No black treacle? No problem. The black treacle is there to lend its nutty, malty notes. Those exact same notes can be supplied by using all muscovado type sugar in place of both the granulated sugar and black treacle.  In fact, muscovado sugar is just white sugar with black treacle added in!

If you would like to make this vegan, just change the ghee to a vegan fat, any will do. It doesn’t need to be a solid at room temperature type one

If you don’t have red onions, white ones will give you a lovely chutney marmalade, just a little different

Ways to use your red onion chutney marmalade

Would work really well with a plain jacket potato, or top a baked potato with cheese and pile a tangle of red onion chutney marmalade on top of that. Yum!

Use anywhere you would use a condiment – with a ploughmans, on any kind of burger, in a toasted sandwich, in a cheese sandwich, even with a curry!

It would be wonderful added to a creamy mushroom and pea sauce for pasta; in an omelette; would go really well with goats cheese, on a pizza or in a quiche 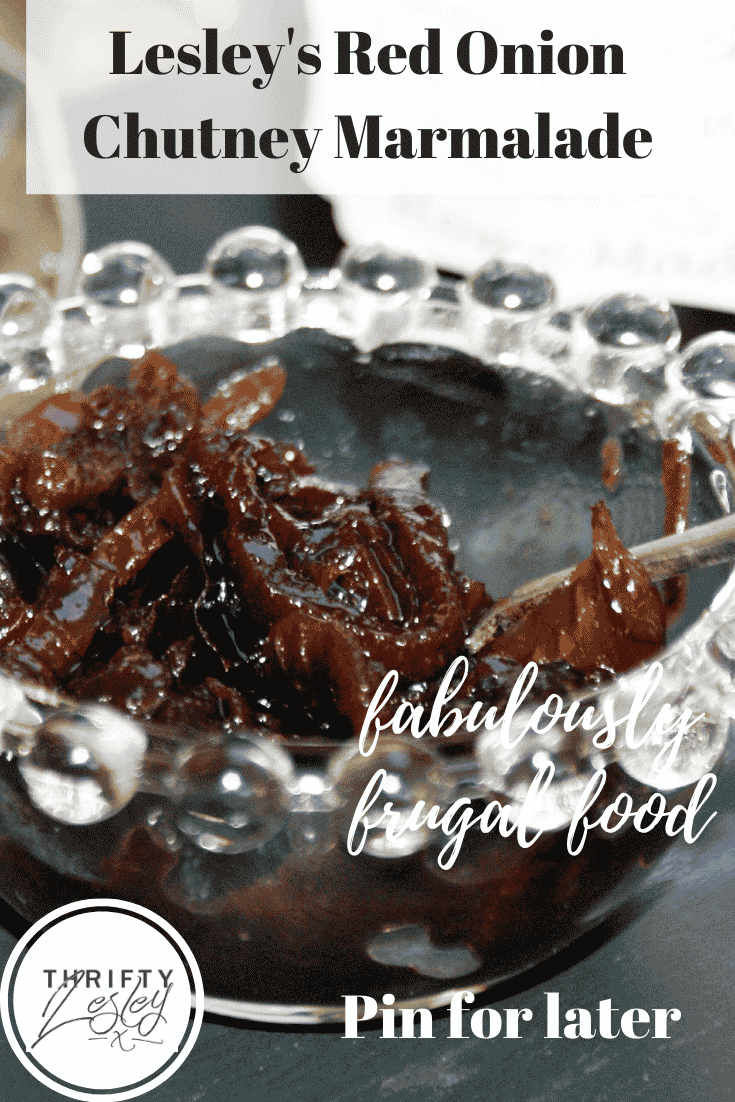 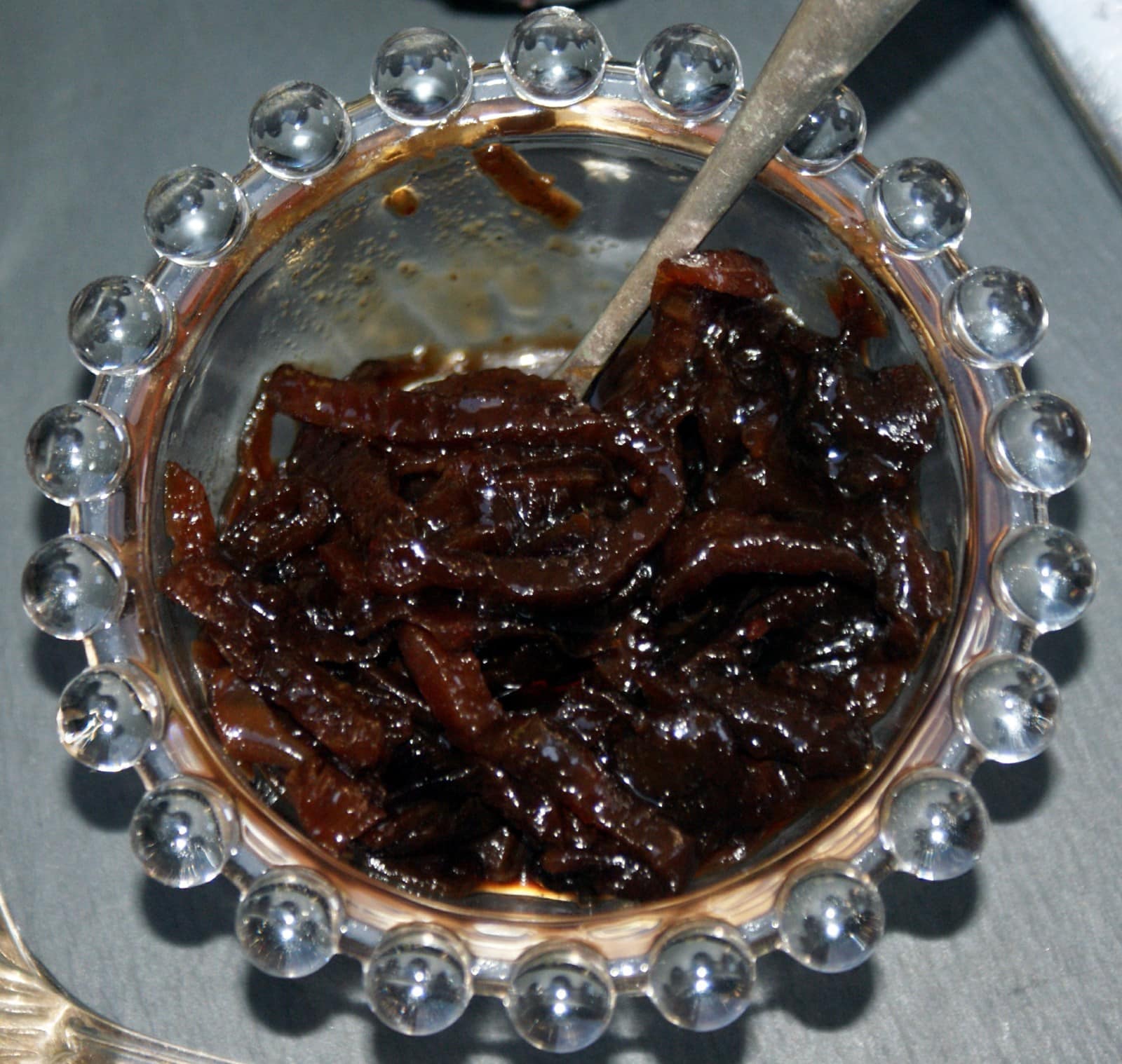 Freezes Well
Servings: 33 x 10g
Cost per portion £1.18 per jar
Calories: 32kcal
Author: Thrifty Lesley
Click on the check box to cross off Equipment, Ingredients or Recipe Steps completed.
If you click and buy anything, I may get a small commission on the purchase. It won't cost you anything extra. Some are just things that I like and/or use myself rather than necessarily best value 🙂
If you enjoyed this recipe, would you please consider leaving a review? It would really help