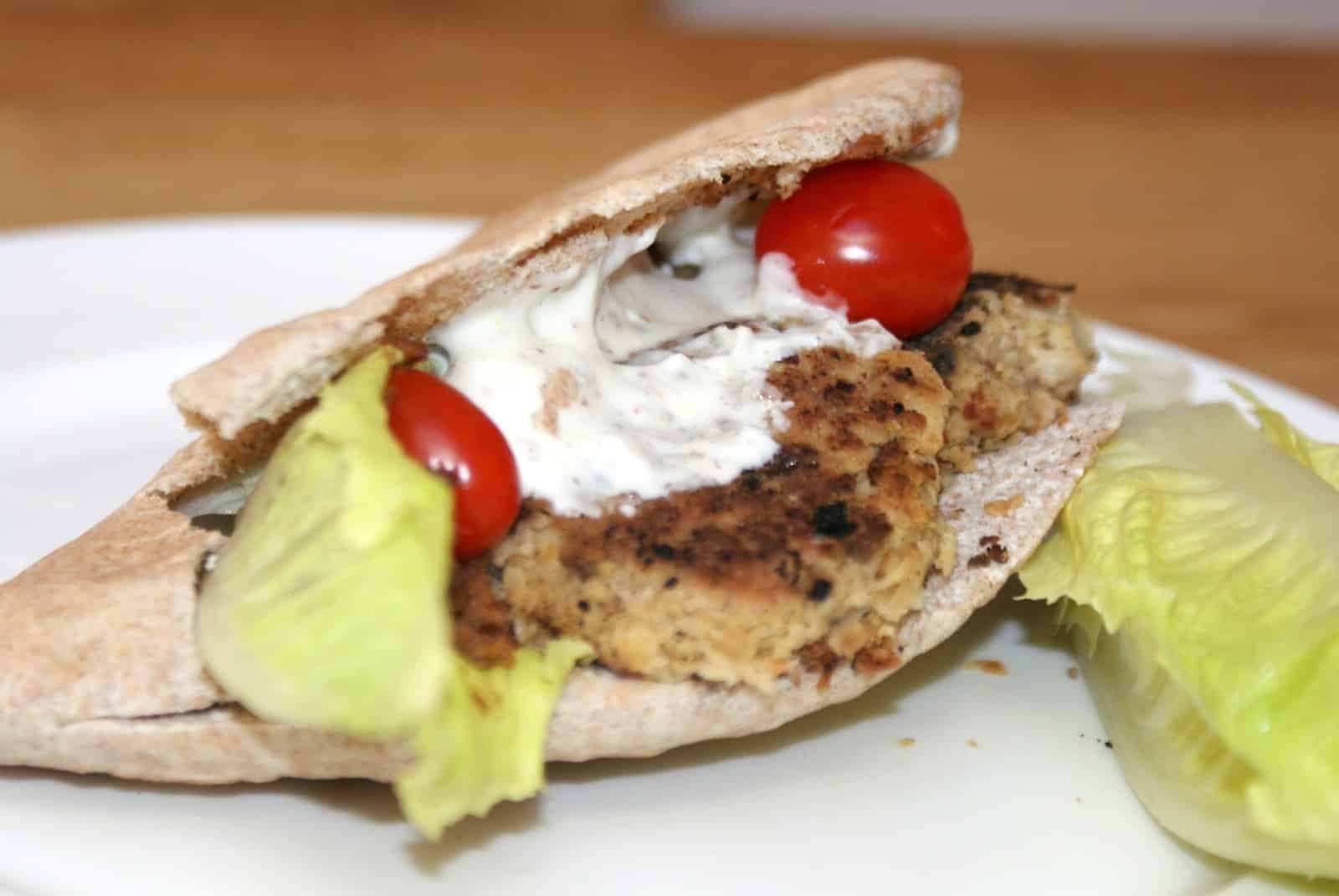 Wiki says that falafel is a common dish eaten throughout the Middle East. The fritters are now found around the world as a replacement for meat and as a form of street food.

Wiki talks about the chickpeas not being cooked before making falafel, which leads me to wonder if we could make them with gram flour?

The word Falafel is derived from a diminutive form of the Arabic word ṭaʿām (طعام, “food”); the particular form indicates “a unit” of the given root in this case Ṭ-ʕ-M (ط ع م, having to do with taste and food), thus meaning “a little piece of food” or “small tasty thing”.

The origin of falafel is unknown and controversial. A common theory being that the dish originated in Egypt

Falafel is made from fava beans or chickpeas, or a combination. Chickpeas are common in most Middle Eastern countries. The dish is usually made with chickpeas in Syria, Lebanon, Jordan, Israel and Palestine. This version is the most popular in the West. The Egyptian variety uses only fava beans.

When chickpeas are used, they are not cooked prior to use (cooking the chickpeas will cause the falafel to fall apart, requiring adding some flour to use as a binder). Instead they are soaked (sometimes with baking soda) overnight, then ground together with various ingredients such as parsley, scallions, and garlic. Spices such as cumin and coriander are often added to the beans for added flavor. The dried fava beans are soaked in water and then stone ground with leek, parsley, green coriander, cumin and dry coriander. The mixture is shaped into balls or patties. This can be done by hand or with a tool called an aleb falafel (falafel mould). The mixture is usually deep fried, or it can be oven baked.

When not served alone, falafel is often served with flat or unleavened bread when it is wrapped within lafa or stuffed in a hollow pita. Tomatoes, lettuce, cucumbers, and other garnishes can be added. Falafel is commonly accompanied by tahini.

Falafel is typically ball-shaped, but is sometimes made in other shapes, particularly doughnut-shaped. The inside of falafel may be green (from green herbs such as parsley or green onion), or tan. 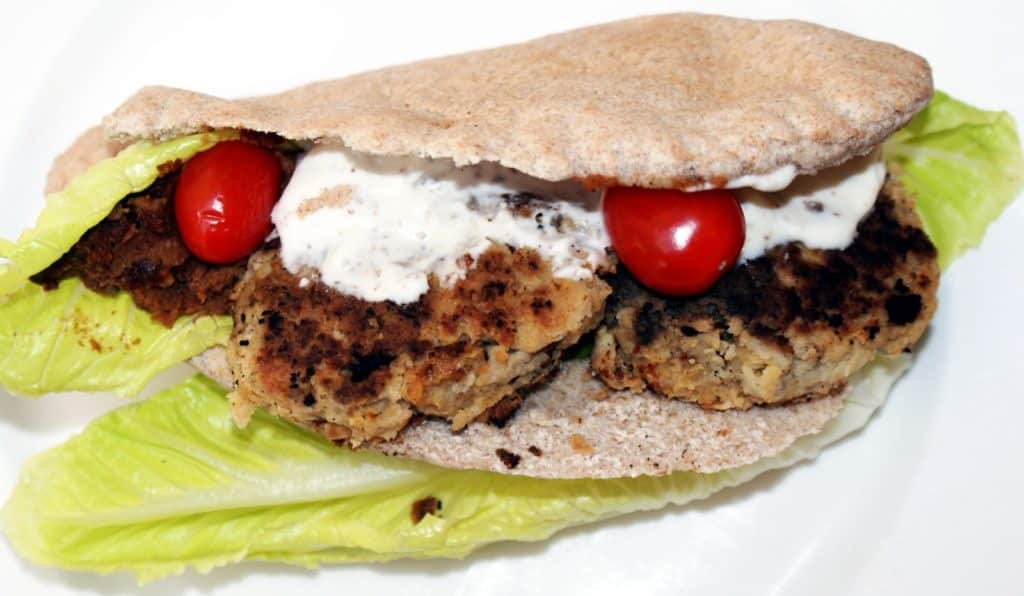 The combination of Falafel & Sun Dried Tomato Hummus couldn’t be more classic, other than the addition of the tomatoes, which, by the way, are completely optional. If you’re looking for a falafel recipe, this is a really easy one

Once you have tried making falafel and hummus, if you haven’t already, you can explore many different ways of flavouring them

Different flavours for falafel and hummus

Leave out the sun dried tomatoes, the hummus is fine without. Add a little dollop of tahini or peanut butter if you have it plain, but it’s optional. Or drizzle a little tahini, let down with water, over the top of the pitta or wrap

There are a great many other flavouring options,  anything that you flavour hummus with, can also be used to flavour falafel. Sticking with tomato, you can add a big squirt of tomato puree. Or whizz in some cooked beetroot, carrot or onion. Add some chutney, I particularly like Patak’s Brinjal (Aubergine) pickle

If you have falafel and hummus, how about some of these combinations

Your possible combinations are endless – experiment, try it and see if you like it!

Yes it is. Hummus ingredients are chickpeas, either from a can, or dried, soaked and cooked; tahini; olive oil; lemon zest and juice. This recipe with sun dried tomatoes just has the tomatoes added and whizzed in. Gorgeous on toast!

Such a lovely combination, whether you enjoy them in the traditional manner with pitta and salad, in a sandwich, on their own, or any other way you like them.

To reduce the cost even further, you can make your own pitta, quite possibly easier than you think

Or you could have a falafel and hummus wrap, pretty easy to make, and super cheap

Flatbreads, less than 2p each. Versatile and very yummy

Things You May Never Need To Buy Again – Hummus 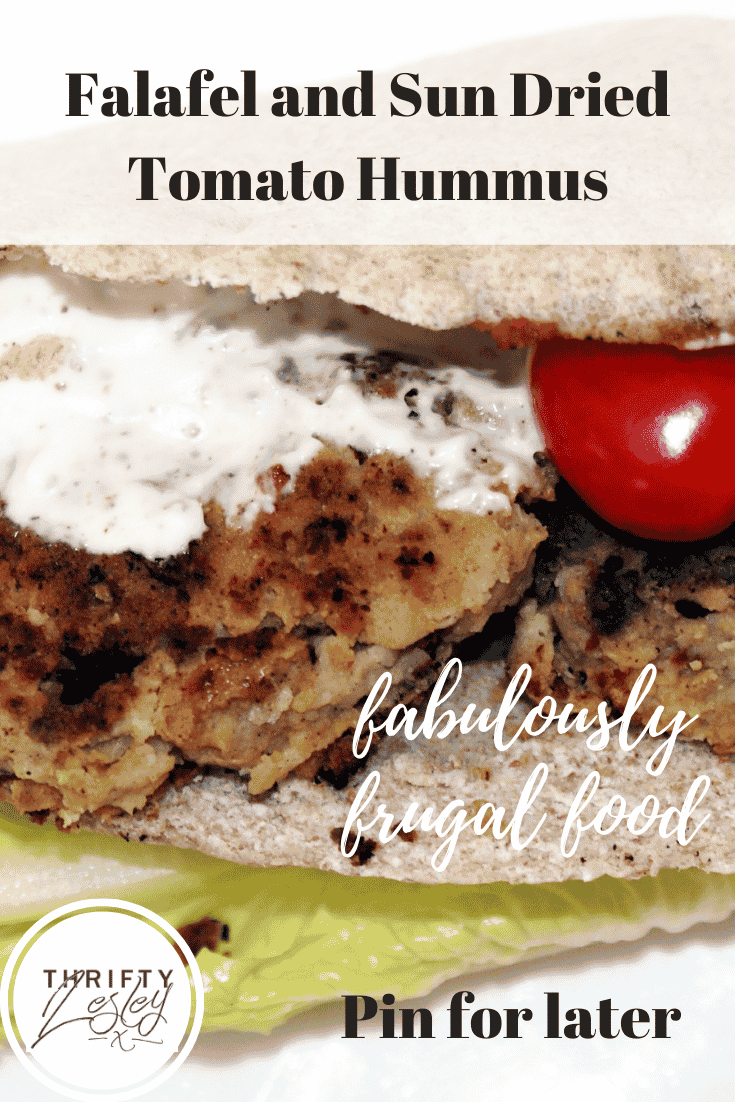 Freezes Well
Servings: 4 stuffed pitta
Cost per portion 55p
Calories: 728kcal
Author: Thrifty Lesley
Click on the check box to cross off Equipment, Ingredients or Recipe Steps completed.
If you click and buy anything, I may get a small commission on the purchase. It won't cost you anything extra. Some are just things that I like and/or use myself rather than necessarily best value 🙂
If you enjoyed this recipe, would you please consider leaving a review? It would really help