Even more plums, a few apples and yukky fingers

Even more plums, a few apples and yukky fingers 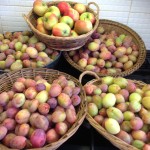 I harvested another 10kg of Victoria plums yesterday, 1.7kg of Discovery apples. Plus 3.3kg of wasp ruined, spotty Scrumptious apples from the back garden. These were, by a long way, the best apples last year. They’re not very good this year! The 2 plums on the top of the basket are the entire harvest from a plum tree in the back garden, bit of a contrast with those in the front! 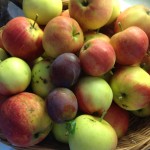 There are still a few Victorias in the front that are not ripe enough to pick yet. No wasp damage at all (they’re all in the back garden scoffing the Scrumptious) but a few with plum moth, so I’ll have to get some kind of trap for next season, and be scrupulous about picking up the shrivelled drops. 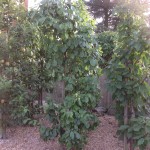 The total plum harvest so far this year is 23kg, with another couple of kilo to come yet. The normal, cheapish price for plums is £2 a kilo, so that’s £50 worth. I bought the trees in 2010 from Pomona Fruits, so they have been in the garden 3 years now. The ones in the front garden are Cordon trees which means they are grafted onto restricting root stock and pruned so that they can be planted 2-3ft apart and grow straight up to 6-8 ft. I need to prune them several times during the summer to keep them that way, but they are very easy to look after. The plums cost £20 each and are currently on offer for £17.95. Four trees at £20 would have been £80, and at the rate they cropped this year, they would have paid for themselves within 1.5 seasons. I do urge you to grow something like this if you can. The fruits cannot be any fresher and are completely delicious. Ours are organic too as we don’t spray them, there’s no need, so even more healthy.

Taking up so little room, if you have any outside space at all, you may well be able to grow one or more of these. They will grow in a large pot, so even a balcony or courtyard would do, so long as it gets a decent amount of sunshine.

If you don’t want plums, there are plenty of other things to try. Apples or pears for instance. All just as delicious and productive. 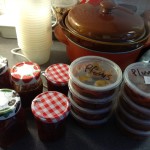 So today, I made another 5 pots of jam, and processed lots more by cooking them in the slow cooker for a couple of hours  in several batches, no sugar, literally just the fruit, no water even, they give out a lot of juice. Then I put them in little plastic pots and I will use them throughout the coming months for breakfast with a little yogort, or on their own, and in crumbles, DP’s favourite thing. 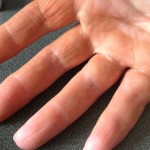 Because a few plums have plum moth grubs in them, I have to cut each one in half so I can throw away the affected ones. Have you ever processed lots of plums? My hands look DISGUSTING now, like they’ve been dipped in nicotine. You can just see in the top part of the picture the colour my hand should be, the rest is all stained, and the fingernails look even worse. They look grimy and ingrained with dirt, even tho they are in fact very clean. Yeurgh. I would try the salt and oil scrub, but I gave my thumb joint a bit of a bash this morning on a branch, and it keeps bleeding all over the place, it’s only just let off, and I don’t want to start it off again. So, for now, its grimy looking hands for me.

The plum in the back garden is a Marjorie’s Seedling, a lovely deep purple plum, that will stay ripe on the tree until the first frosts. The idea being the Opals come first in August, then the Victorias in September, followed by the Marjories Seedling in October. Athough the tree has had lots of blossom, and is supposed to be self fertile, it  has never had much fruit, just a handful. I was talking about it with a horticulturalist friend and she suggested that it may still need a pollinating partner. The plum trees in the front are in pollinating group B, whereas Marjories Seedling is group C. So I am thinking of getting another cordon in group C for the back.

I have the same problem with some of the apple trees in the front. The Fiesta, Lord Derby and Braeburn apples haven’t ever cropped very well. The Fiesta is a group B, supposed to be self fertile, and matched anyway with  the Discovery, also a group B. Lord Derby and Braeburn are both group C. So I don’t know what is happening there. I will keep a record of what blossoms when next season, what the weather is like etc and see if I can work out how to fix it.

Do you have a garden, and if you do, are you growing any fruit? How did you get on this year?