We decided to get a leg of lamb on Friday and drove to Aldi at Bexhill to pick one up. But we’d left it too late and they’d sold out, no matter. The shop was completely rammed! We got a couple of other things instead and we’ll get some lamb later if we still fancy some.

We were just setting off on a walk when we spotted a couple of faces at my daughters window and a couple of arms waving. Daughter was working, but my grandson and great grandson were there, so we changed tack and popped in. After a cuppa we took GGS for a gallop along the beach. He’s four and as full of energy as most four year olds. We threw the obligatory stones into the sea, always fun. The shifting pebbles on the beach played havoc with a painful knee I have at the moment, keep getting sharp twinges.

Then we went off for a spot of lunch in the Italian. On being asked what he would like, GGS replied that he only wanted pizza. He eats really well, lots of veg and proper food, tucking in with gusto. His favourite food is curry! It’s lovely to see one so young eating good food. He’s been leading his dad a merry dance wanting his Easter eggs. Dad was determined he would have them today, littlie wanted them now now now. Dad won of course, bet littlies been running round the walls today!
.

On the way back from the beach we popped into a charity shop and got a couple of bits including a bag of tennis balls. We played with them around the corner, in a safe place, where there was also a phone box.  The phone box turned out to be fascinating and I ended up calling GGS in the phone box, using my mobile and much hilarity followed. It’s lovely how you can have so much fun with so little, especially when they’re small.

Friday night he was taken overnight fishing with my daughter and her husband, daddy went too. It was a first for both of them and they both loved it. It’s a major interest for SIL and something he likes to do frequently.

Today we’ve been doing some gardening. There’s one bed in particular that’s been badly neglected and not really brought back after the extension work. It’s in a right state! I’ve been refurbishing one bit specifically to prepare it to receive some plants removed from the bed that had everything taken out and newly replanted. It’s tiring work, but must be good for me, it’s all exercise. It’s looking a lot better, but lots more to do yet. Isn’t there always in a garden. It’s all an ongoing project. We may do some more tomorrow, or we may go out walking. Depends what we feel like when we get up.

I bought us each a posh chocolate egg from Hotel Chocolat and we have enjoyed them over the last few days, all gone now sadly. I don’t know whether to be sad or pleased that I can have posh chocolate without getting a migraine!

This is the one I had, it was extremely yum! I discovered at Christmas that they were selling the Christmas chocolates off cheap, so popped over to have a look, and yes! They’re selling their seasonal stuff at half price. Bargaintastic! I must say I’m tempted 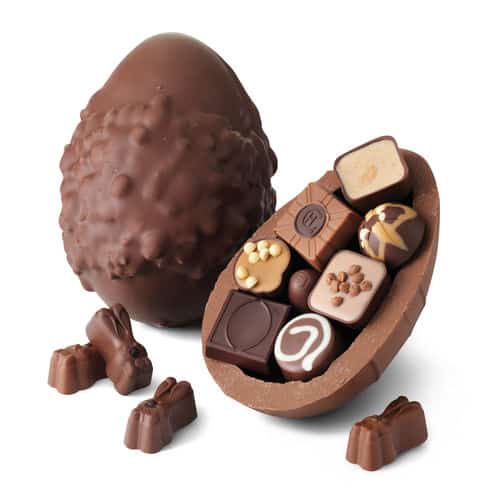