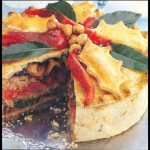 Went to my WI Garden Group Christmas Supper Party last night. It was a lovely relaxed evening. There were about 25 or so of us (the garden group is very popular!) and we had it in a hall that was just about the right size.

We hired a speaker to talk to us who was from the National Garden Scheme (NGS) which organises the opening of mainly private gardens to raise money for charity. She was interesting and entertaining. She told us about a large allotment opening for the first time in 2014 and I am really looking forward to going to see that. Fruit and vegetable gardening is the type that gets me most excited.

The hall was abuzz with laughter and chatter the entire time, other than when the speaker was doing her bit. I laughed with my friends, caught up with others, talked gardens and allotments, stuffed my face and generally had a great time.

The food had been split up so that we had 4 separate main courses, each to feed 8 people, with sides. Others had brought home cooked nibbly bits for beforehand or puddings for afterwards, and there were lovely drinks throughout, chocolates and coffee afterwards and the hall had been made to look very festive and pretty, and there were candles and flowers on the tables.  Most things were made by the members of course, this is the WI and everything was delicious.

I made a BBC Good Food recipe, Christmas Pie with Walnut and Rosemary Pastry. It was something I have done before, so was in my folder, the link is here if you would like the recipe. It has a butter pastry with walnuts and rosemary, and the filling is layered sun dried tomato risotto, peppers, spinach and mushrooms with some dried ceps. Looks great and tastes wonderful. There is butter in the pastry and cheese in the risotto, so if you wanted to make it vegan, it would be a pretty simple twiddle.

I had 2 large jars of red peppers in the larder and I thought I would use half of one of those for the pie.  I was having a problem opening the jar, it has been in there a long time, so walked into the sitting room with it to ask Mike to open the jar, and mid-sentence dropped it on the floor where it smashed and splashed everywhere – what a mess! Fortunately, I had a second jar to use for the pie after the extensive clearing up, but it was extremely annoying to chuck away an entire large jar of peppers.

The pie makes a lovely celebratory vegetarian centrepiece, but it most certainly isn’t 50p a portion!

Had coffee with a friend in a local coffee shop this morning. More coffee with a big group of friends tomorrow morning, followed by lunch at a local pub with the WI monthly lunch group (I mistyped lunch as ‘munch’ – I rather like the sound of a ‘munch club’!)