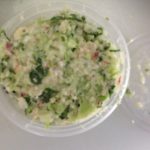 What do you do with your cauliflower stalks? I think they have a lot of flavour, like broccoli stalks, and tend to choose those first when we have something and veg. I usually cook them like the florets, DP has those, because he prefers them, and I have the stalks, because I prefer those. Same thing with broccoli. I also use cauli stalks in a cauliflower and paneer curry. And failing any of those, they go into the soup du jour.

I have just finished the last of the Broccoli Pesto, it was still in the fridge, I never did get round to putting it in the freezer – I suppose at least it proves that it keeps well!

Today I was wondering about using cauliflower in a pesto. DP is always buying cauli’s, and yes, we had one in the fridge. So I had a rummage. 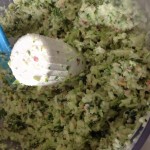 then I whizzed it until it was a fine mulch. Some of the herb sprig stalks were a bit tough, and wouldn’t whizz, but that was ok, I just picked them out. This made 9 little pots, each enough to dress pasta for 2. Although I have been using an entire pot when I have the Broccoli Pesto in a sandwich 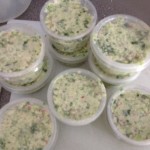 How much was it? With the rummaged ingredients, difficult to say, but it would be about the same as the broccoli one.
DP decided to like it on principle because it had cauliflower in it. I, erm, forgot to mention that most of the cauli was stalk 🙂

After this experiment, I think the essential ingredients for this kind of pesto are a crisp vegetable, the herbs and citrus zest and juice and some kind of nuts

What other vegetables would work – how about carrot and radish, maybe with orange zest and juice and coriander and mint sprigs

or swede and parsnip (both raw) with thyme and rosemary, lemon for the citrus

hmmm, wonder if I could get a runner bean one to work? They are just about to spring into peak production.

The nuts could be anything at all I think and still make a delicious pesto, so cheapy peanuts spring to mind – they would go well with the carrot variation.

have a play and see what you come up with, you can always bung it in the soup if you don’t like it.