I have lots of lovely pictures to show you, but they simply won’t load today. The broadband speed is appalling this evening and everything is taking for ever. So I’ll post this and get the pictures in when I can. Shame about the piccies

I’ve updated with the pictures now. 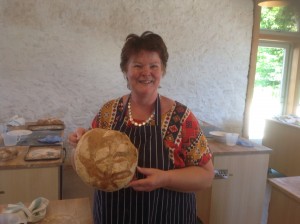 I had the most wonderful day yesterday. I went on a course on how to make bread. I have been looking forward to it for months. DP came too, he’ll probably be telling me how to do it now! The course started at 10am, and when we arrived at 9:30, we were offered a freshly made egg and bacon roll. I’m certainly glad I refrained as I had not long ago had a little fruit and yogort for breakfast. I wasn’t hungry that morning. We did nothing but eat delightfully delicious bread for the rest of the day!

The tutor, Aiden Chapman is a master baker and runs Dough Anarchist at Borough Market. He was a great teacher, enthusiastic, knowledgable and willing to share his hints, tips and ideas. We started off by learning how to make a sour dough starter, how to keep it going and how to use it. Plus how to name it! He said that many bakers of sour dough name their ‘mothers’, as the starter is called. His is called Bella, after his daughter. He also said that he has killed several of his mothers, and one day, at his bakery, the cleaners threw out the pots of starter, thinking they were waste…eek!

No kneading was involved in the sour dough. It takes several days to make a loaf, but only about 5 minutes of actual effort over that time. Maybe the meal planners amongst us would be better at this 😉 you can keep the starter in the fridge for up to two weeks without doing anything to it. After that, it really needs to be fed by adding more flour and water to keep the yeasts alive. A prepared loaf can also be held back by putting it in the fridge to be baked when you are ready. The actual prep is extremely easy once you have an active starter going. You could easily spend a minute in the morning before work shaping one, pop it in the fridge, and bake it when you get home. Or shape in the evening, bake in the morning. It is pretty special bread.

He went on to demonstrate a basic dough, he had to knead this one, and showed us how. We then made some, practising our kneading, and proving it in a banneton, which is one of those little ridged baskets. I shall be getting one of those, hopefully costing less than the £12 they were at the school.

Once Aiden’s dough had proved for a while, we made flatbreads. He broke off little pieces from his huge 3kg mix, and we all rolled out a flatbread and cooked it in massive pans in the professional kitchen. I want one of those pans! I could do anything in one of those!

Then we ate our flatbreads with delectable mixes knocked up for us by the chefs at the school. There was a pulled shoulder of lamb, slow cooked mushrooms, and some kind of creamy, faintly cheesy mix, that was lovely. Everybody mmmm’d their way through their breads.

The flatbreads were tender and soft, and very delicious. Aiden said that they keep well and they would freeze. No fat in these, unlike the recipe I recently posted.

After that we started off some absolutely huge focaccia. Two massive plastic tubs of it. Lots of ideas and tips on how to make it. 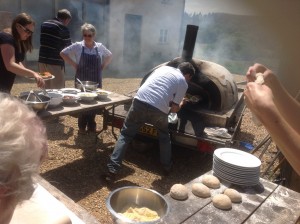 It was a beautifully sunny day, so at lunchtime we went outside to watch the chefs prepare the wood fired pizza oven. That’s Aiden with his head in the oven. Once he’d got the oven to his liking, he pulled off balls of dough for us and showed us how to free form a pizza base, which we then topped from an outstanding selection of ingredients. A beautiful tomato sauce base, wet garlic, sauted pak choy, chef prepared smoked pig cheek, chorizo and salami, a young ricotta type cheese, roasted spring onions, lardons, capers etc etc 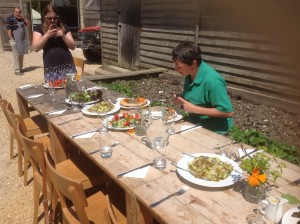 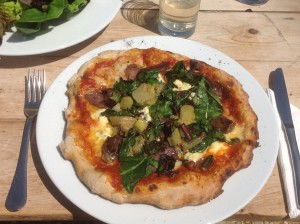 They went in the pizza oven two at a time for 45 seconds!! 45 seconds!! After which out would come a puffed and charred pizza that was the most delicious thing I have ever put in my mouth. The oven was much much hotter than a domestic oven could get, but I am definitely going to see if I can reproduce that one. What am I talking about, I shall be trying everything 😉 The chefs had also produced several beautiful little salads to go with the pizzas too 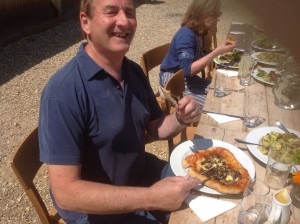 Doesn’t he look pleased with his self made pizza 🙂

We waddled back indoors after lunch where we prepared the focaccia for the oven. We did four different flavourings…onion and blue cheese, beetroot and rosemary, broad bean, pea and caper, and a sweet one, roasted rhubarb. Olive oil was tipped liberally over everything and they were left to rise again. 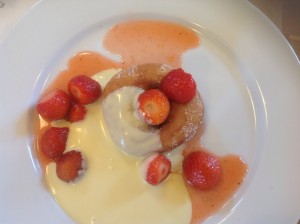 Meanwhile we prepared doughnuts. A dough enriched with eggs, butter, milk and sugar. They were also left to rise, then deep fried in the biggest saucepan I have ever seen, it must have been 18″ high by 2 feet across. Once they were cooked, they were dipped in sugar and we ate them with strawberries macerated in local cider, with elderflower custard. Totally, totally scrumptious. 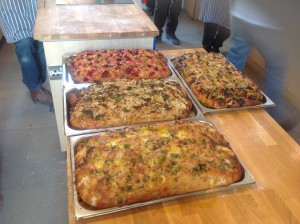 Then the focaccia came out of the oven and I had the tiniest sliver to taste them, I was struggling by now :0 And we had also had sour dough to try as well. 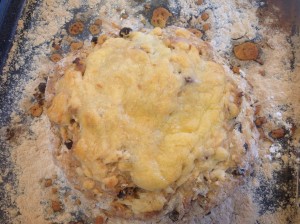 Then we made flavoured soda bread. I did almond and currant, topped with cheese. Another tiny sliver, with me thinking I wouldn’t be able to eat anything else for a week.

Then the day was over, we were given notes to take home with us and off we toddled, heads full of ideas, stomachs distended with all the delectable morsels consumed over the day.

As you probably know, cooking is a passion. I shall definitely be doing more of these days. I enjoyed it all hugely and had the most wonderful time

I shall be trying to reproduce what I have learned and I shall pass on all that I can. I love the idea of the flavoured focaccia for instance . Put a huge one of those on the table, with a simple salad or two, and maybe some good cheese, and that’s dinner for a group of people.