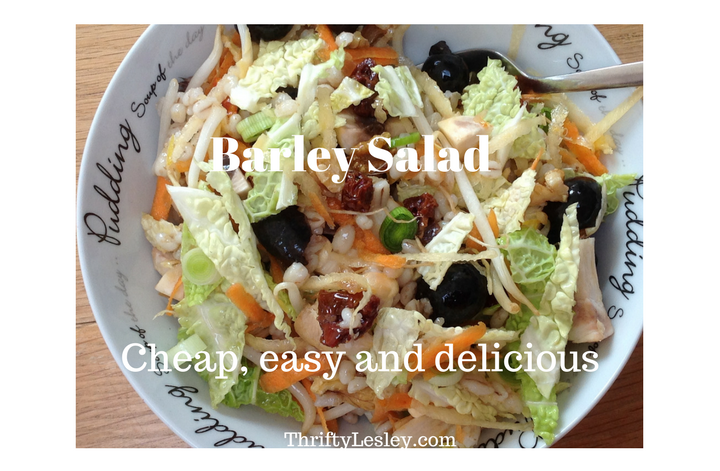 I haven’t done a recipe for you for a while. I did a soup earlier this week using the juices from some boiled beef, miscellaneous veg from the fridge and some pearl barley. I looked at the container with the pearl barley in, and thought I may as well cook all this and have some in a salad. Well, today was the day of the salad.

If your barley is uncooked, cook it now according to the packet instructions. My packet said to boil it quite hard for 10 minutes, then simmer gently for a further 30 minutes.

Grate the swede and carrot, don’t peel them unless you have to. Shred the cabbage finely. Chop the preserved lemon finely, I use all of it, not just the peel. I can’t see the point of throwing away the flesh.

Now just mix everything together and taste. Depending on what combination you have used, you may need to season with black pepper, or a dressing. The combination I used was fine just as it was.

I’m so glad I tried this. It was scrumptious! The pearl barley gave a background nutty taste, with more structure and strength to the bite than rice or lentils. The preserved lemon and sun dried tomato worked really well, giving little acid pops of flavour. The black olives provided their olivey strength, and the lovely crunch from the walnuts worked well too.

It would go beautifully with a piece of chicken or fish, or perhaps a boiled egg or two, fried halloumi or tofu. I had it just as it was, and it was really good just like that. I used a good dribble of the sun dried tomato oil, but you could make a dressing. Lemon juice and honey: horseradish and vegetable oil : fish sauce and soy sauce, whatever you fancy.

It would travel well for packed lunches. If you are having a dressing with salt in, pack that separately, as the salt will draw out juices in an hour or two, and make your salad watery.

Although the calories are on the low side, I found this really filling, and it lasted me for hours before I needed anything else.

Everything in this could be varied, dependent on what you have, what you like and who you are feeding. The barley is super cheap, but could be easily changed to green or brown lentils, brown rice or quinoa. Try and keep it a base with some protein in, rather than, say, pasta, otherwise you’ll be short on that in this meal.

The expensive things in this are the sun dried tomatoes, the black olives, and the walnuts. The walnuts could be value salted peanuts or cashews to cut that cost down a bit. You could leave out either the olives, or the tomatoes. You need something with that intense flavour, or it might be a bit bland. If you have neither, value feta has a strong flavour. If you have no preserved lemon, try using lemon zest from a fresh one. Preserved lemons are super easy to make, and very very cheap when compared with bought ones.

I used the beansprouts because I had some in the fridge from a stir fry earlier in the week.

You could add chopped pieces of any meat available, or well drained, well cooked, chick peas, kidney beans or other beans.

If it is of interest to you, this recipe is vegan.