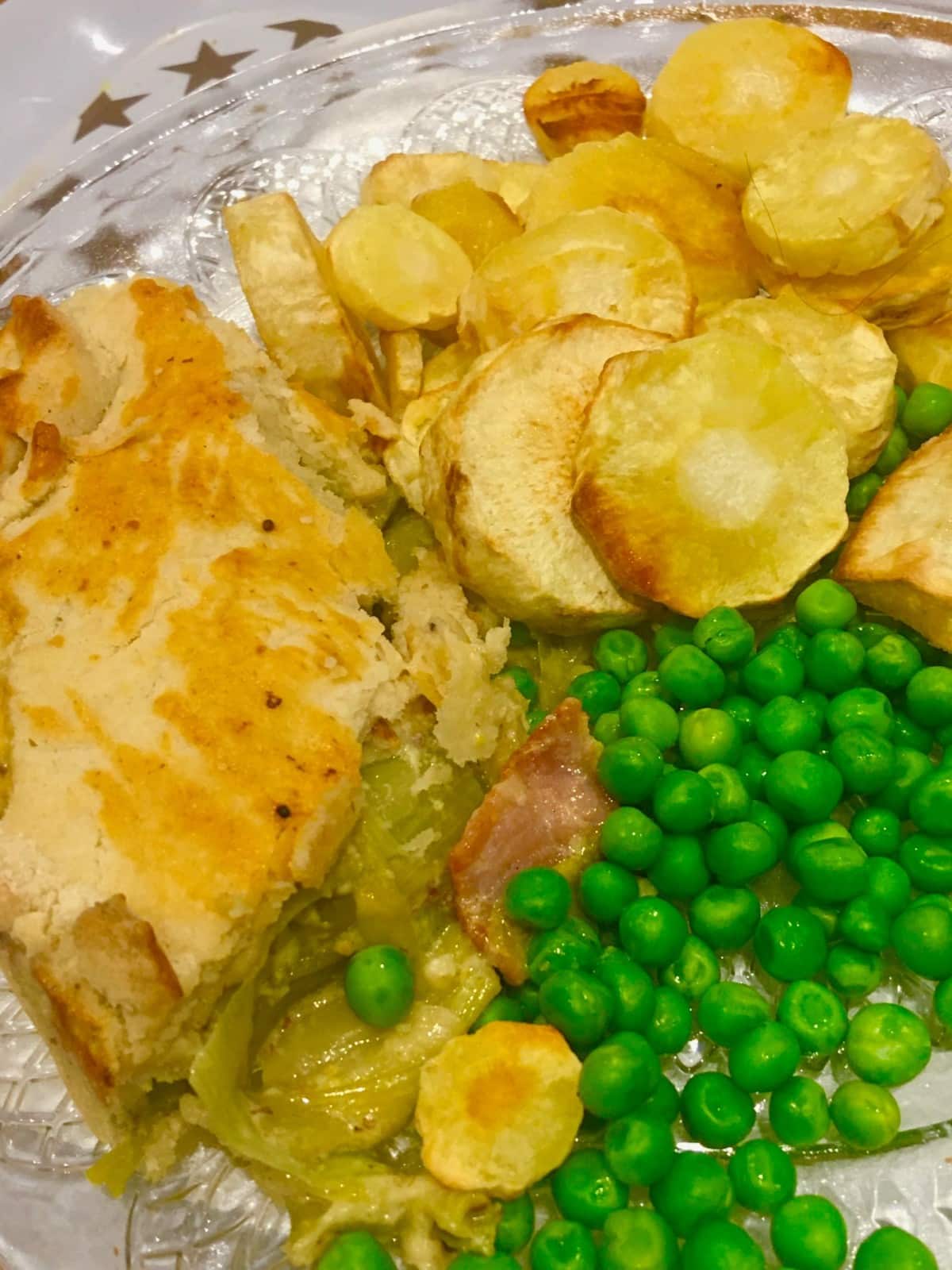 I found the base of this recipe in one of my many cook books – The National Trusts Great British Vegetable Cookbook by Sybil Kapoor. It has loads of recipes that I have marked to try ; stir fried cabbage with pork balls; stuffed parathas; mushroom flan and carrot and cardamom cake to name a few

I have tweaked it rather to frugalise it.  I used oil pastry rather than butter shortcrust. Whole eggs replaced egg yolks, I can’t be doing with parts of eggs in the fridge. There was creme fraiche in the fridge so I used that, but cream is cheaper so have used that in the recipe. And of course I used cooking bacon instead of rather more expensive rashers

The amount of mix also made rather too much, overflowing the dish and leaving enough to make a small crumble. So I’ve adjusted the quantities as well.

I cut up the bacon into pieces the size of a stamp and fried them. You may prefer to grill it, in which case cut the bacon up after it has cooked, make sure to keep all the flavoursome juices and add them to the cooked leeks.

I had creme fraiche in the fridge, so I used that, but any creamy item would work here. So you could use double cream, maybe single cream to reduce the fat, although I haven’t tried it; I would also use soft cream cheese. Thick Greek yogurt would work too, bringing it’s own tang to the pie.

The amount of mustard suggested does give a lovely flavour, and you know it’s there. But if you don’t like mustard, just leave it out, it will still taste good.

The amount of bacon and leeks isn’t critical, so if what you have is a bit more or less, it will be fine.

I have specified large eggs, because that is what I buy and use, but medium will work too. Add another medium one if you like, again, the amount of egg isn’t critical.

Make a double or even triple batch of the leek and bacon pie mix and you can tuck a couple of ready meals away for another week – a crumble and / or a pasta bake.

Or freeze the actual mix itself and use it to make the crumble or pasta bake or as a baked potato topping. So you would just need to pop the spuds in the oven or microwave and defrost the topping for a pretty effort free dinner. Or defrost the mix, pop it into a dish and top with crumble or mix with cooked pasta

If you haven’t discovered cooking bacon, it is sold in most supermarkets and is extremely cheap compared to rashers. Available in packs of 600-800g usually, it consists of scraps of bacon from the end of a joint that’s been carved. You will get lumps in there, sometimes a rasher or two and sometimes pieces that will need to be bashed flat or used whole in casseroles. For any recipes using bacon it’s perfect, save those more expensive rashers for when you really want rashers

Leeks are a member of the onion family. The edible part of the leek plant is a long cylinder of bundled leaf sheaths called a stem or stalk. As the leek plant grows in height, soil is pulled around the base of the plant, blanching the stem – making it white and tender. Many people only use the white parts, but the green parts are edible as well and if your leeks have come from the shop with dark parts, you have paid for that, so it would be a good idea to use it if you can. The darker the green parts, the stronger the flavour and more robust the leaf structure, so use in casseroles or something where they will be well softened. I often use them in curries where there strong flavour doesn’t dominate.

If you grow leeks, you will be familiar with the darker parts of the plant

When I first made this recipe, although the quantities were supposed to be for a 20cm tin, there was quite a bit too much. So I put the remaining mix in a small dish and topped it with crumble. You could of course, dispense with the pastry altogether and go straight to the crumble which I am definitely adding to my meal plan

If I hadn’t used that extra mix for a crumble, I would have cooked some pasta and made a leek and bacon pasta bake with it. I may very well do that the next time I make it. Grated cheese on top would work well here. I would use a good strong cheddar, but equally, a blue cheese or a mozzarella ball cut into lumps would bring their own pleasures to a pasta bake

Leek and potato soup with Stilton and croutons 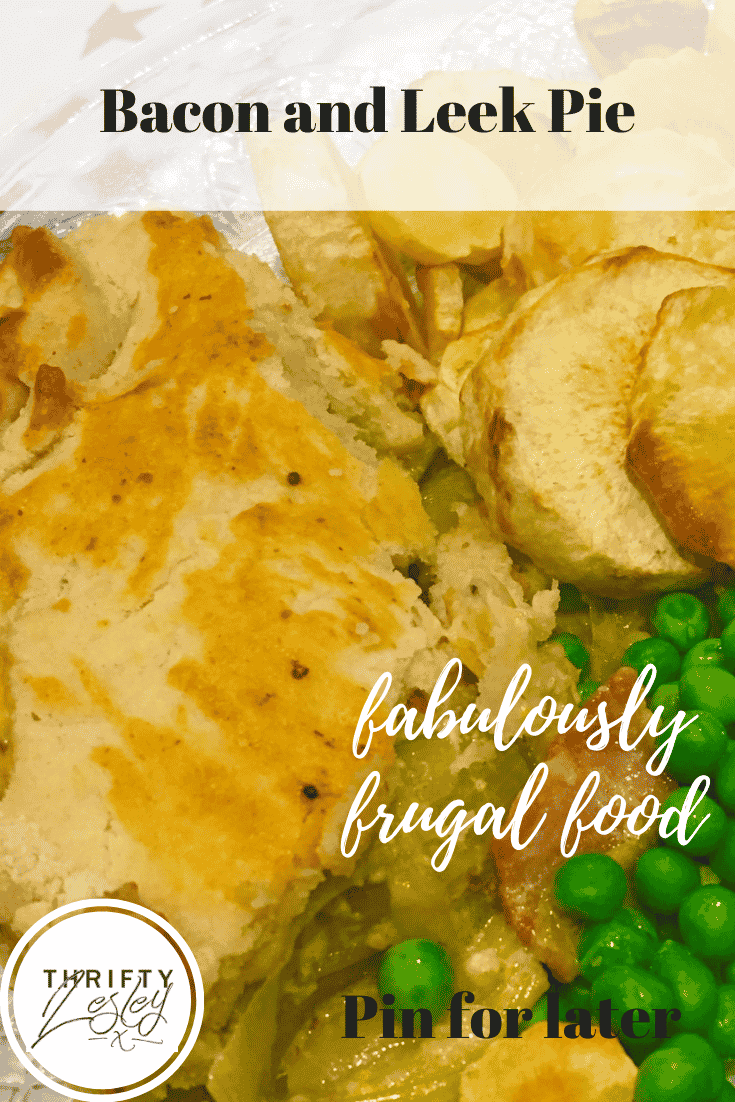 Nut Free
Servings: 4
Cost per portion 46p a serving
Calories: 839kcal
Author: Thrifty Lesley
Click on the check box to cross off Equipment, Ingredients or Recipe Steps completed.
If you click and buy anything, I may get a small commission on the purchase. It won't cost you anything extra. Some are just things that I like and/or use myself rather than necessarily best value 🙂
If you enjoyed this recipe, would you please consider leaving a review? It would really help


Got a great recipe? How about submitting it to appear on Thrifty Lesley!