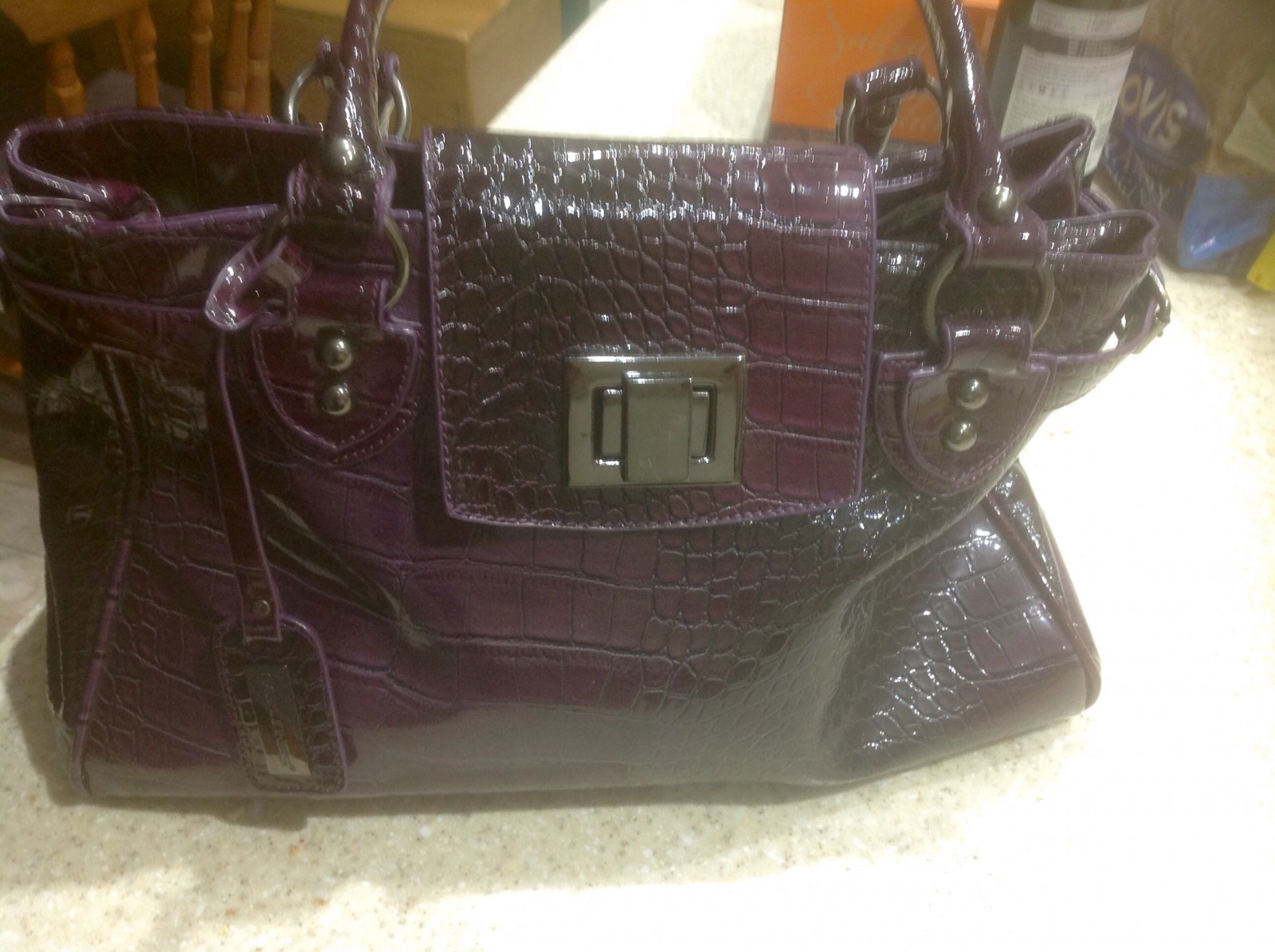 Heathfield was heaving today, hardly surprising being Christmas Eve Eve. It was so nice to get out and about in some light and sunshine. I decided to have a wander in the town, partly for the sheer joy of it, partly to get a bit of exercise- so easy to vegetate this week – and partly to get a few goodies in. We did have a few, I didn’t get loads, as we’d only gorge on them, but somehow, what there was has all gone. I got some lovely boxed choccie biccies, and two packets of those dark chocolate biscuits with soft ginger biscuit inside, and a maple and salted caramel pudding, more of that later.

I had a little cruise round some of the charity shops, not all of them, we have so many of them, it would take a couple of hours to do them all. Of the two new ones, one is like charity shops used to be, displaying sad jumble sale reject type stuff, I don’t like going there – it makes me feel rather down! The other, an Autism one, is like a funky and expensive homeware store, a lovely place to visit. Someone there has a very good and artistic eye for display. Not in that one, but another one I like, I dropped off todays contribution. Some ribbons for Christmas parcels that I’ve had for years and not used, similarly some gift labels and a matching pair of very dark wood head and shoulder sculptures that I still like but haven’t displayed for many years, so off they go.

In yet another shop, I found a purple handbag that I really liked. So I got that, and a couple of paperbacks. I already have a purple handbag, but it has a separate zipped section all along the bottom and I don’t find it very usable, and consequently don’t use it much. So I shall donate that next time I go to town.

This is the one that will be donated. 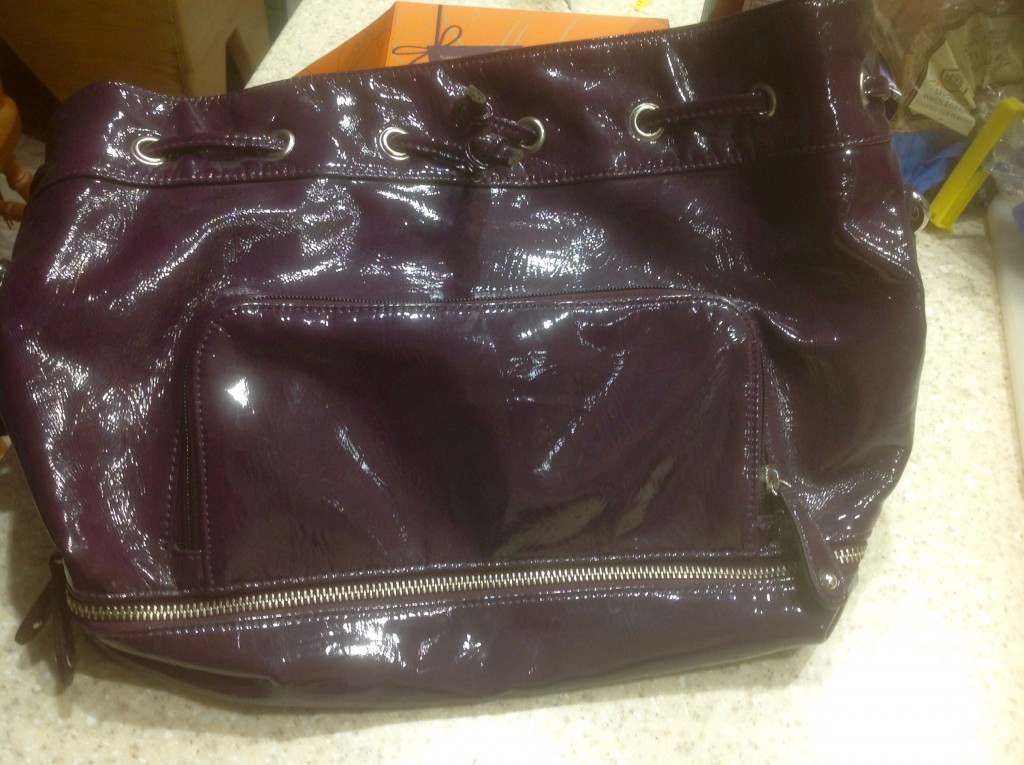 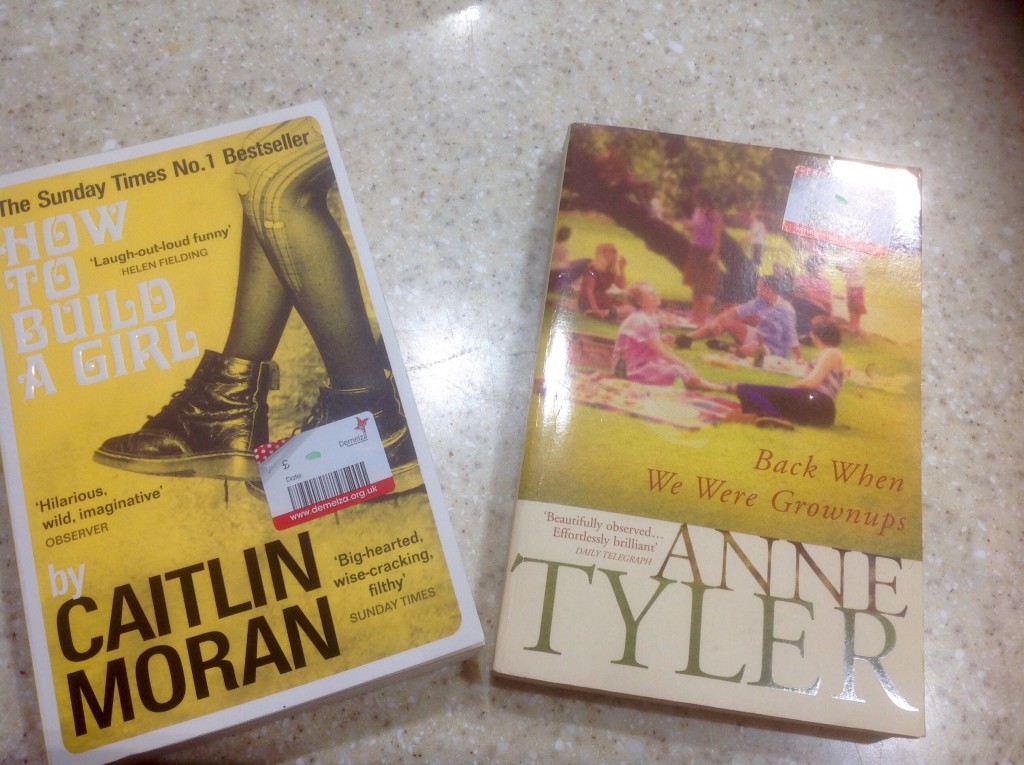 My current read is this. It’s woven around the stories of the men who worked on the Thai Railway Line during WW2. It’s like many a good book, thought provoking, interesting, and a page turner. It’s quite harrowing in places. I’ve read two thirds of it and the narrative has switched to post war and having covered some of the Australians, I am now reading about some of the Japanese and Korean guards. If you come across it, it’s worth giving it a go, a good read. 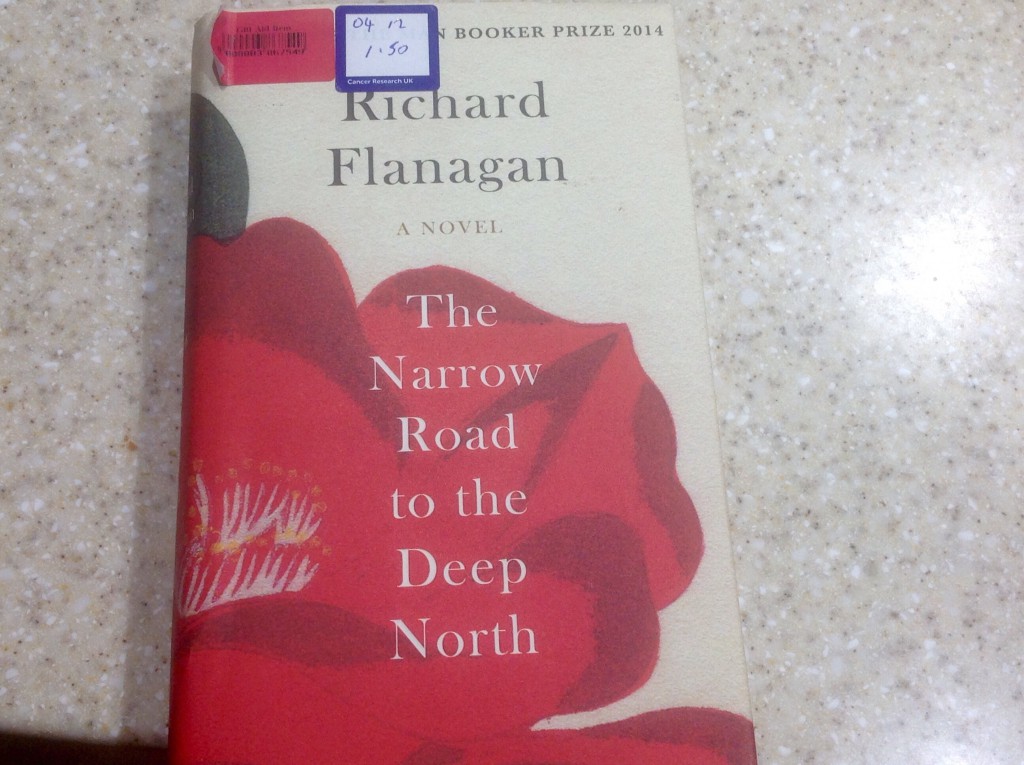 Then, on my trip round Heathfield this morning,  it was off to Sainsbugs for some fruit and goodies. The Round Table were collecting outside, so in the spirit of the season, I slipped a fiver in their tin.

This evening we had a cold turkey salad, with an extravagant bag of watercress and rocket. And we followed that, after a pause, with some of the pudding. Oooh, just the kind of pudding I like, soft, salty from the salted caramel, fruity from the dates, cranberrys and chestnuts and that luscious sauce. And we had a drizzle of cream, yum. 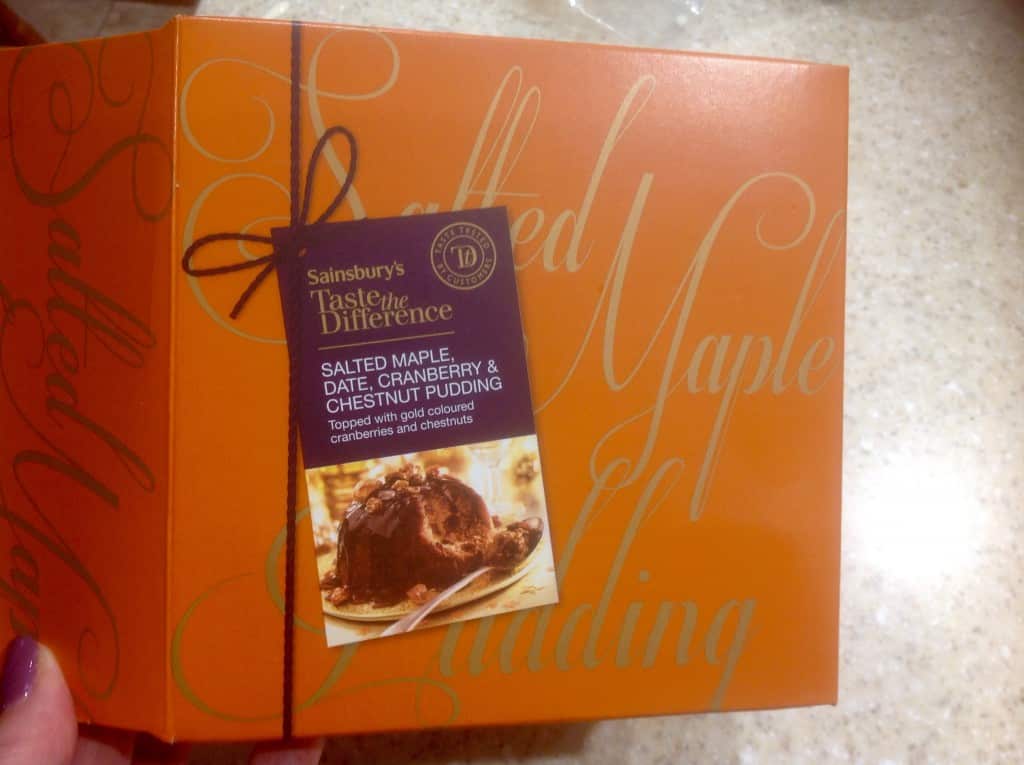 I had made stock with the turkey carcass, and this morning I stripped all the remaining meat from the bones and made some soup. Only I did the opposite with the water of what I did with the Dahl, and didn’t add enough. Either that, or it bubbled away whilst cooking. Even though it was in a lidded slow cooker, there was steam rising from it, so the water would have reduced.

I put all the stock back in the slow cooker and added the lovely jelly left from the roast. I would have made gravy with it, but I’m the only one here that likes it, so decided to use it in the soup instead. Then in went some carrots, chopped small, an onion, a broccoli stalk, 2 cupfuls of swede, cut tiny, 2 handfuls of dried butterbeans, one of pearl barley and a few red lentils. Then it was left to bubble for several hours. When it was nearly done, I added some savoy cabbage, shredded.

When I stirred it, it was obvious it wasn’t going to be wet enough to make soup. So rather than add more water, it has become a kind of casserole/stew. On tasting, my goodness, it tastes good. I added a bit of salt and pepper, and that was it. More delectable home made ready meals. 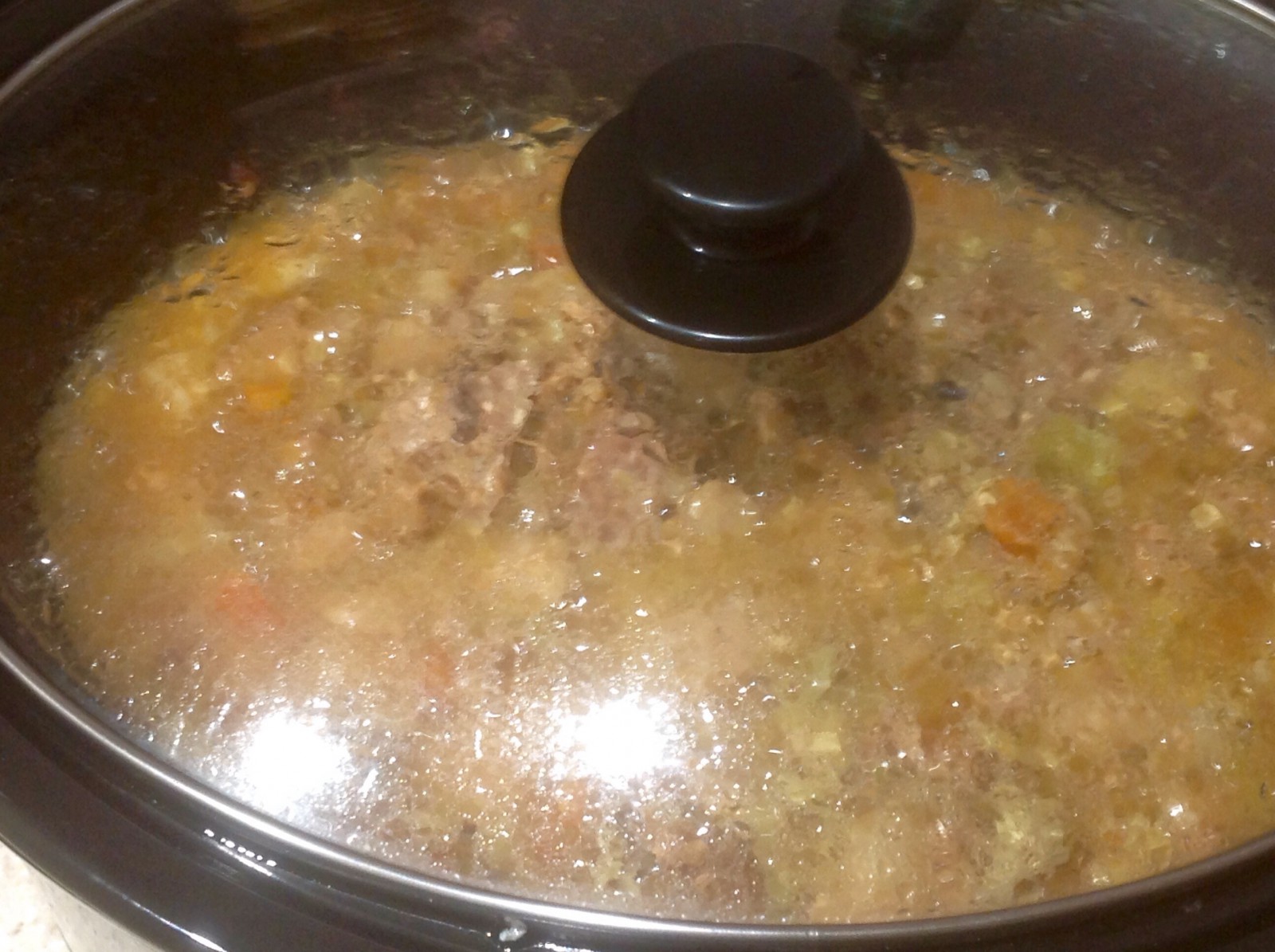