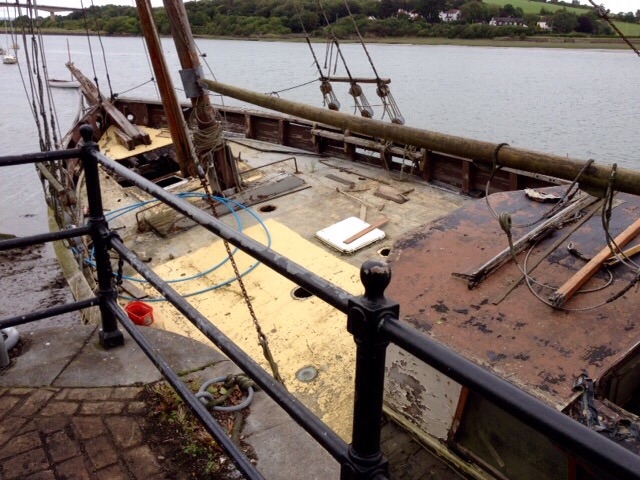 Weatherwise, today has been much like yesterday – overcast and grey, but not much actual rain. So when we were ready, we decided to have a look at Bideford. It has a feel much like the Old Town in Hastings, not too far from where I live. The smell at Bideford has that same fishing village twang. Bideford is on the River Torridge, is tidal, and there are fishing boats tied up along the quayside. Although one or two could do with a little attention.

We strolled along the quayside, explored the park and found the Pannier Market which was on today. There is a row of shops alongside it called Butchers Row where, historically, all the shops were butchers. They aren’t now, they are all sorts of interesting little shops. In one of which I bought this little gift for DGD where she can dress up little card dolls with little paper outfits. I used to do that as a child, carefully cutting out paper clothes with tags on and bending the tags round the paper dolls to ‘dress’ them. 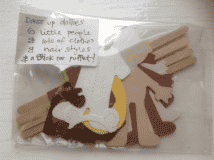 I peered in the butcher shops and the estate agents, as you do. In the butchers, I noticed that they had pigs kidneys for £1.98 a kg. Goodness, I thought, that’s cheap meat. So when we got back, I looked it up on mySupermarket and found that they could be had for a similar price from supermarkets.   Asda has lambs kidney for £2.22, but it’s likely that many stores won’t carry it, a butcher is probably a better bet. When I investigated ox heart as a cheap meat, it was difficult to find in supermarkets.

We may go back to Great Torrington tomorrow as there is an RHS garden there that I would like to see, RHS Rosemoor, it’s somewhere I’ve wanted to visit for a long time now.  I’ve just looked at the brochure online and the place is huge, with vegetable gardens, always my favourite, a ‘hot’ garden, at its best now apparently and lots and lots of other things too.

Just finished dinner and want to get this posted, took some pictures of it all this evening and will show you tomorrow