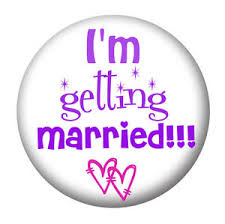 I’m getting married in the morning! Ding dong!
The bells are gonna chime. Pull out the stopper!
Let’s have a whopper! But get me to the church on time!

Yes, the third wedding of my summer has arrived and I’m getting married tomorrow to Mike, the man I have been with, and engaged too, for a mere 38 years. Feels very very strange that this is the last day with my existing name, and a bit like losing my identity, but having made the poor man wait this long, I’m sure it’s the right thing!! Hahahaha!

So this afternoon, what was I doing? Ironing my ravishing dress, polishing my shoes, perfecting my makeup? No, I was out the front garden picking Opal plums that had decided they were really ripe and going to start dropping off the tree. The wasps were flying in and out in battalions. Here and there, there were plums with 6 or so vibrating wasp bottoms sticking out of them. Mike hosed off the tree to blast some of them off, of course, they just flew straight back in. I knocked off the worst chewed ones and the few that had mummified and himself raked them up to try and keep the wasps off a bit. Then I gingerly picked two minarette trees, plum by plum, being very careful not to pick any wasps at the same time. At one point one of them inserted itself neatly down the front of my t-shirt and bumbled around in there, but I held the top open and it flew out again. By the time I had finished, I was soaked through from the wet trees and extremely dishevelled. Very satisfying tho to pick our own produce and squirrel it away.

And this evening? Yes, processing the plums to put in the freezer as we won’t be eating that many over the next few days! They are turning my hands nicotine yellow and I’m hoping I can scrub it off for tomorrow. I’m sitting here talking to you with a towel wrapped round me while my hair soaks in some colour, what with that and my nicotine hands, I’m a beautiful sight

The Opal plums are scheduled to ripen late July, early August, so I should have noticed they were ready before now. The second lot of two trees are Victoria’s, and they are due end of August, early September, so I’m hoping to get a lot of fresh ones from them.

The tomatoes are not very good this year. They haven’t had much blossom, and what there was didn’t set very well, still haven’t had any ripe ones. I’m not really sure what went wrong this year, other people’s seem to be alright.