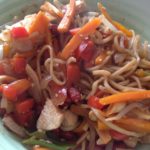 This was supper last night. Haven’t had stir fry for a while, and saw some bean sprouts in Sainsbury’s, so that’s what we had.

If you like stir fries and have them fairly often, it is really worth getting a little bottle of sesame oil. You may even have some already. If you don’t, and can’t spare the cash, you can make this without it.

I added a handful of sesame seeds, because I had some in, and a chicken breast, cut small, also because we had some. Plus a sploosh of Marsala wine. If you don’t have them, doesn’t matter a bit. Stir fries are like risotto and soup, you can more or less throw in whatever you have. So long as YOU like it, that’s all that matters.

If you want a base to start, this is a good one. Then go on from there and get creative.

The bean sprouts were 75p and I used about a third of the pack, which would be an extra 25p, making the dish 63p a serving so breaching our self imposed 50p limit. If you trimmed 13p off the other meals in the day, you could still do this for £1 a day. Having say, Breakfast Pancakes at 4p would do it

Prepare all the vegetables. Peel the onion, slice in half, then slice into half moons, as thin as you can manage. Top and tail the carrot, no need to peel if you scrub it. Cut into batons the size of matches.

Heat a wok or large frying pan with a good splash of oil and the sesame oil if using. Keeping the heat high, and keep stirring, add the onion and sizzle for a minute. Add the carrot batons and peppers. Cook for a minute or two. Add the bean sprouts if using. When the veg are cooked, add the soy sauce, the wine if using, and season with salt and pepper. Add the sesame seeds if using.

While the veg are cooking, put the noodles in a pan, pour over some boiling water and cook for a minute or two until soft. Drain.

At the same time, heat a small frying pan, add a few drops of oil and the raw peanuts. Fry until the nuts have a bit of colour. Keep an eye on them as they burn easily.

Tip the noodles into one side of the wok, get a bit of the sauce on them, sprinkle over the cooked peanuts and serve immediately.

If you use the bean sprouts, you will have two thirds of the pack left. They will keep for a few days for more stir fries. Or, believe it or not, these delicate little sprouts freeze successfully. I couldn’t believe it when I first found this out, they don’t look like they would survive a chilling in the fridge, let alone the freezer! 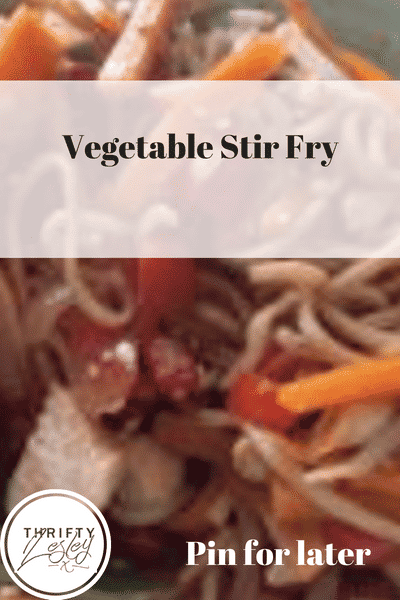