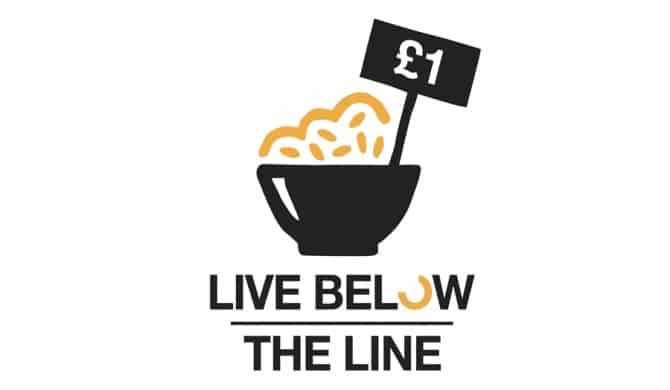 Here on Thrifty Lesley, we explore many ways of eating on £1 a day. And that is quite enough of a challenge for me. I couldn’t even contemplate existing on that £1 for everything. This email pinged into my inbox today and I reproduce it more or less in full as it gives the rationale for the Live Below The Line campaign and the reason that I support it. I detest unfairness in all its many forms and this now annual campaign raises awareness and does a little to change things. As someone said once, every little helps and even a small step, repeated often enough, will result in a long journey.

For the second year, I will be taking part in the challenge 27th May to 1st May. I’ll be using £5 of food purchased from supermarkets, no part packages of anything, nothing from the garden, no freebies, no extras, except salt and pepper, and, oh dear, no tea or coffee. That was the hardest part last year. Can’t say I’m looking forward to that bit! This only seems fair as I have been writing about ways to feed yourself on £1 a day for about 18 months now, and I’ve learned a lot and it wouldn’t be enough of a challenge otherwise. I may explore the options that I can use in Aldi as I quite fancy their Super 6. I’m hoping there will be a good selection for me to use that week.

I am fundraising for Action Aid again as they take the issues of women and girls in particular and I feel that that fits in with my feminism and involvement in the WI. If you can nip over and donate a £1 or 2, that would be fab. I’d really love to be able to raise £200 for them this year. I shall be donating a goodly sum myself at some point before April.

The email…
Could you live on £1 a day for food and drink for 5 days?

More than a billion people around the world survive on less than this every day, for everything

Global Citizen, the movement to end extreme poverty by 2030, is once again challenging people across the UK to eat and drink for £1 a day for 5 days. The Live Below the Line challenge runs from 27th April – 1st May, raising awareness and vital funds for those who have no choice but do it every day – the extreme poor. Live Below the Line is unique and experiential, giving participants real insights into the challenges faced by the world’s poorest people.

For 1.2 billion people around the world, living on less than £1 a day is a harsh reality: this figure is equivalent to 20 times the UK population. In 2015, these 1.2 billion people have to make impossible choices – food or medicine, school or clothing. Live Below the Line is campaigning to put an end to this injustice, inspiring people to join the movement to end extreme poverty.

Actors Hugh Jackman, Ben Affleck, Amanda Abbington, Bonnie Wright, Tom Hiddleston and Tamzin Merchant have already pledged their support, and actors Freddie Fox and Rakhee Thakrar are already signed up for 2015. Participants are sponsored to live on £1 a day, raising vital funds for major charity partners including Action Against Hunger, Action Aid, Malaria No More UK, Save the Children UK, Send a Cow, Unicef UK, as well as 24 other UK charity partners.

Live Below the Line is the UK’s premier experiential challenge, with already being inspired to take action for the world’s poorest people. Participating in Live Below the Line helps to change perspectives about extreme poverty, through experiencing a small part of the struggles over a billion people go through day to day. Whether you’ll be eating rice and beans for five days or something cheaper and tastier, this is bound to test limits and make people more aware of what it is like to live with limited choices.

Although a difficult challenge, the Live Below the Line website has all the recipe ideas, meal plans and tips you need to get through the week. In the last four years over 17,000 people have taken part in the campaign and over £4 million has been raised for charity partners.

Freddie Fox, said: “I’m delighted to be an Ambassador for Global Citizen and to be taking part in the Live Below the Line challenge this year. This campaign is a profound and insightful experience that, in some small way, gives you the chance to put yourself in the shoes of those people around the globe that live below the poverty line.”

Stephen Brown, the Global Poverty Project’s European Director and Head of Live Below the Line in the UK said: “Live Below the Line is the fastest growing UK fundraising challenge, and we’re on track to have our most successful campaign to date, with over 60,000 people set to take part globally. Extreme poverty holds people back from contributing to the world, and we’re out to end the pointless suffering. Be a part of it!”

About Live Below the Line

Live Below the Line is an initiative of Global Citizen – an international education and advocacy organisation working towards the end of extreme poverty by 2030. Its mission is to grow the number and effectiveness of Global Citizens to achieve the public, business and political action to end extreme poverty. Live Below the Line currently takes place in the UK, USA, Canada, Australia and New Zealand. It challenges people to live below the poverty line for 5 days each year, and use their experiences to create conversations and raise awareness of the issue of extreme poverty. £5, 5 days to End Extreme Poverty

The World Bank has developed an objective way of saying what it means to be in extreme poverty, and therefore how many people are trapped in this scenario. They set an ‘Extreme Poverty Line’, stating that anyone who survived on less than this amount per day would be considered to live in extreme poverty. Since 2005, this line has been set at $1.25 per day in the USA. This is calculated for each country using Purchasing Power Parities, and for the UK has been calculated to be £1.

Global Citizen is a movement to end extreme poverty by 2030. It’s inspiring and engaging a generation of people to take action the on the issues that keep people poor. It creates compelling and experiential campaigns, like Live Below the Line, to engage the public in a new way, creating an entry point into the movement and in turn, inspire them through content and real impact to keep them part of the movement long term.

Global Citizen is focused on the millennial generation. We recognize the importance of building a genuine movement, but that not everyone finds the issues easy or comfortable to talk about. That’s why Global Citizen uses the music industry to incentivize engagement and action.