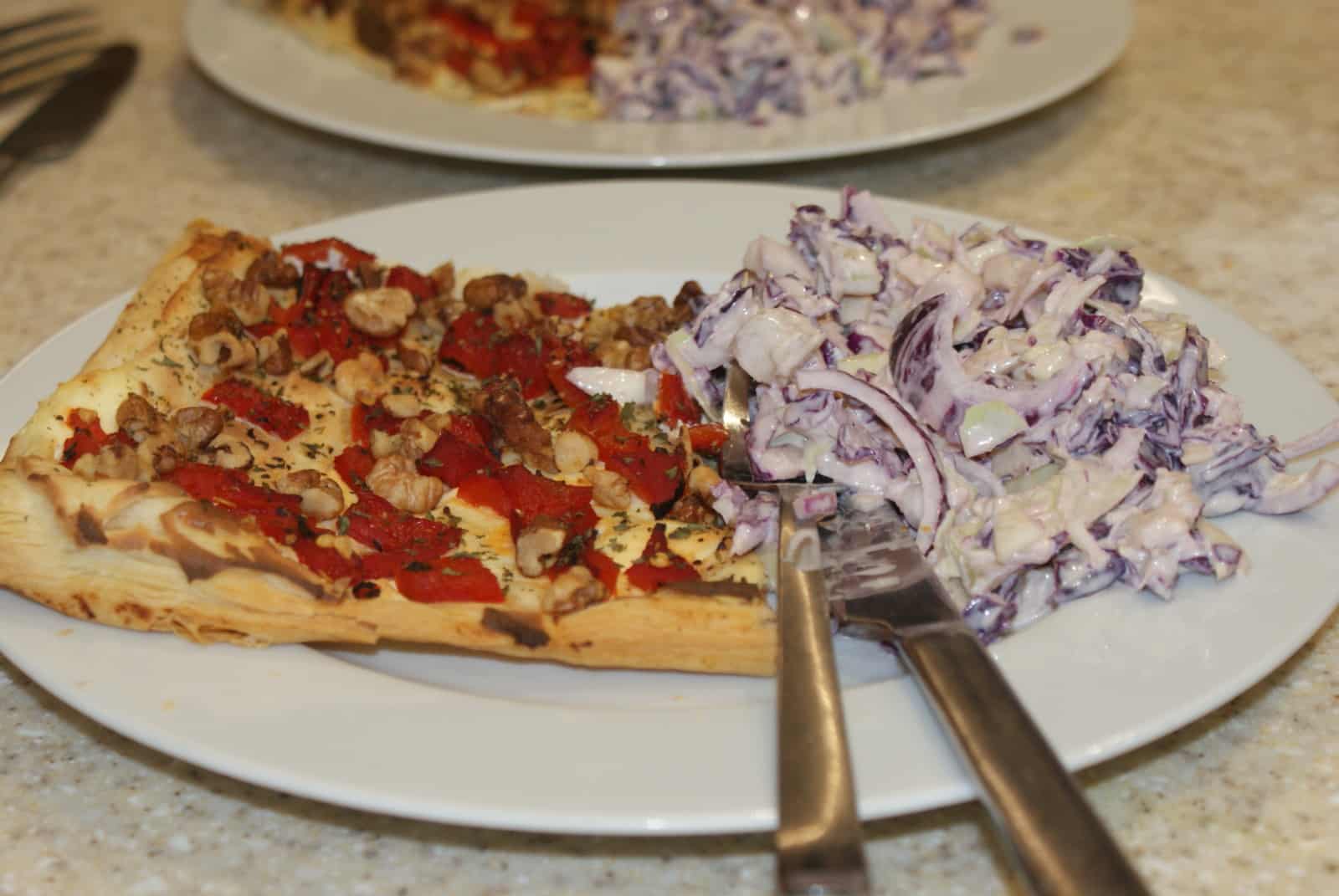 I had the U3A cookery group round recently and we like to make canapes at the December meeting. Amongst other things, we made these Red Pepper, Goats Cheese and Walnut Palmiers, and they were delicious, although they could have done with a little more goats cheese

When we were preparing them, I thought what a lovely tart they would make. So, today, I made the tart and served it with a winter coleslaw. Lovely!

If you’re going to use puff pastry, a big 500g block is the cheapest way to do it. Half the block will make a tart large enough for 4. The rolled out sheets are convenient, although I always find I need to roll them out more thinly, but you are paying almost 30% more for that little bit of convenience. And the branded stuff is twice as much as the block per 100g!

Goats cheese is lovely, but a bit expensive for here, so I substituted value soft cheese which worked beautifully and gave an even more creamy flavour than the goats cheese.

Both the Jusrol and Asda versions of puff pastry (I’ve priced it using Asda) specifically say that they are suitable for vegans. If you want to make it vegan, you just need to use something else instead of the soft cheese. A vegan cheese, or suitable pesto would work well, or tomato puree or miso for a very different version.

The coleslaw dressing would need to be changed. Use a vegan mayonnaise and a vegan yogurt if you want to use that. Or change it completely and make a vinaigrette

Walnuts are particularly good with the red peppers and cheese, but you could swap them out for any other nuts you have. Value roasted peanuts would be cheapest, then there are cashews, almonds, brazils or hazelnuts, any of which would be lovely

Not got any red peppers in a jar? You could use the strips of frozen pepper, or roast some fresh ones and slice them up. Or use small pieces of carrot, sweet potato, onion petals or even kale

Use lots of fresh herbs in the summer, sprigs of mint, parsley or rosemary or any other fresh herbs you have, for a fresh and summery tart

I also added some red onion crescents as my husband likes them, and a stick of celery as I had it and it needed using.

I wanted to make the dressing more interesting than just mayonnaise. I tend to use half thick Greek yogurt and half mayonnaise anyway as I like the taste. To that I added a little Dijon mustard and some pepper. The dressing was nice, but a little too sour, so I added a teaspoon of muscovado sugar which worked really well and gave a lovely under flavour

Add some pomegranate seeds for a seasonal touch!

There are many ways to flavour mayonnaise to make your dressing a little more interesting. I used the Dijon because I had seen a chef on Masterchef make American mustard mayonnaise for something he was doing. Inspiration can come from anywhere! 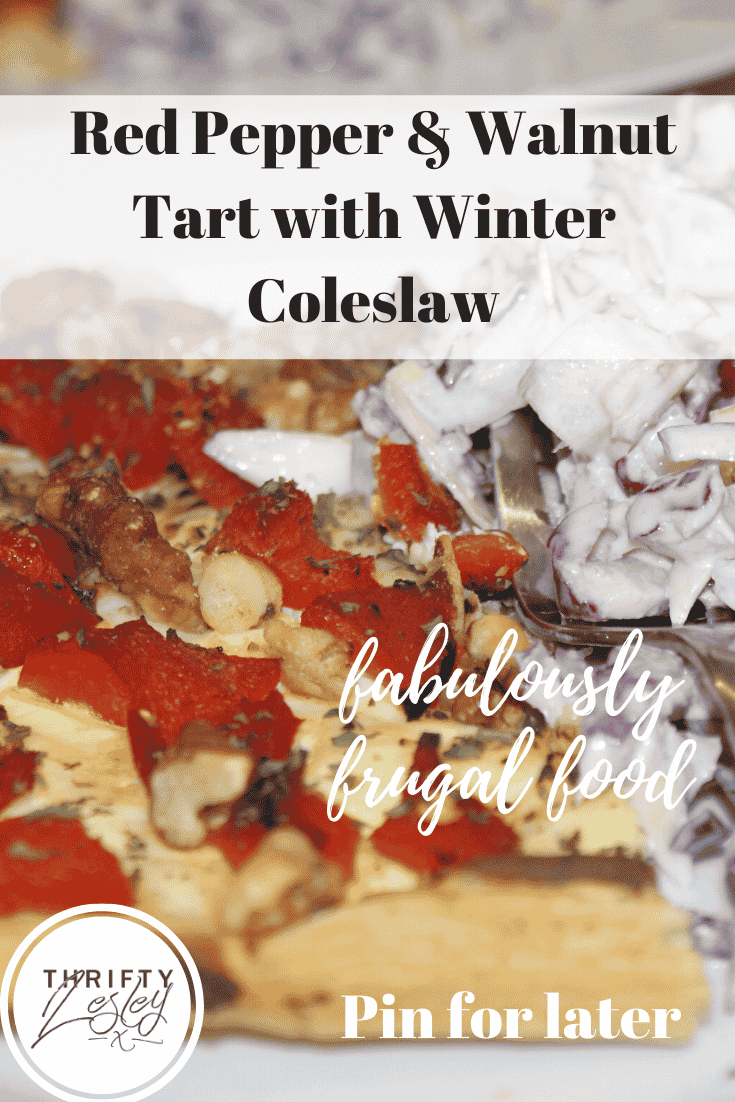 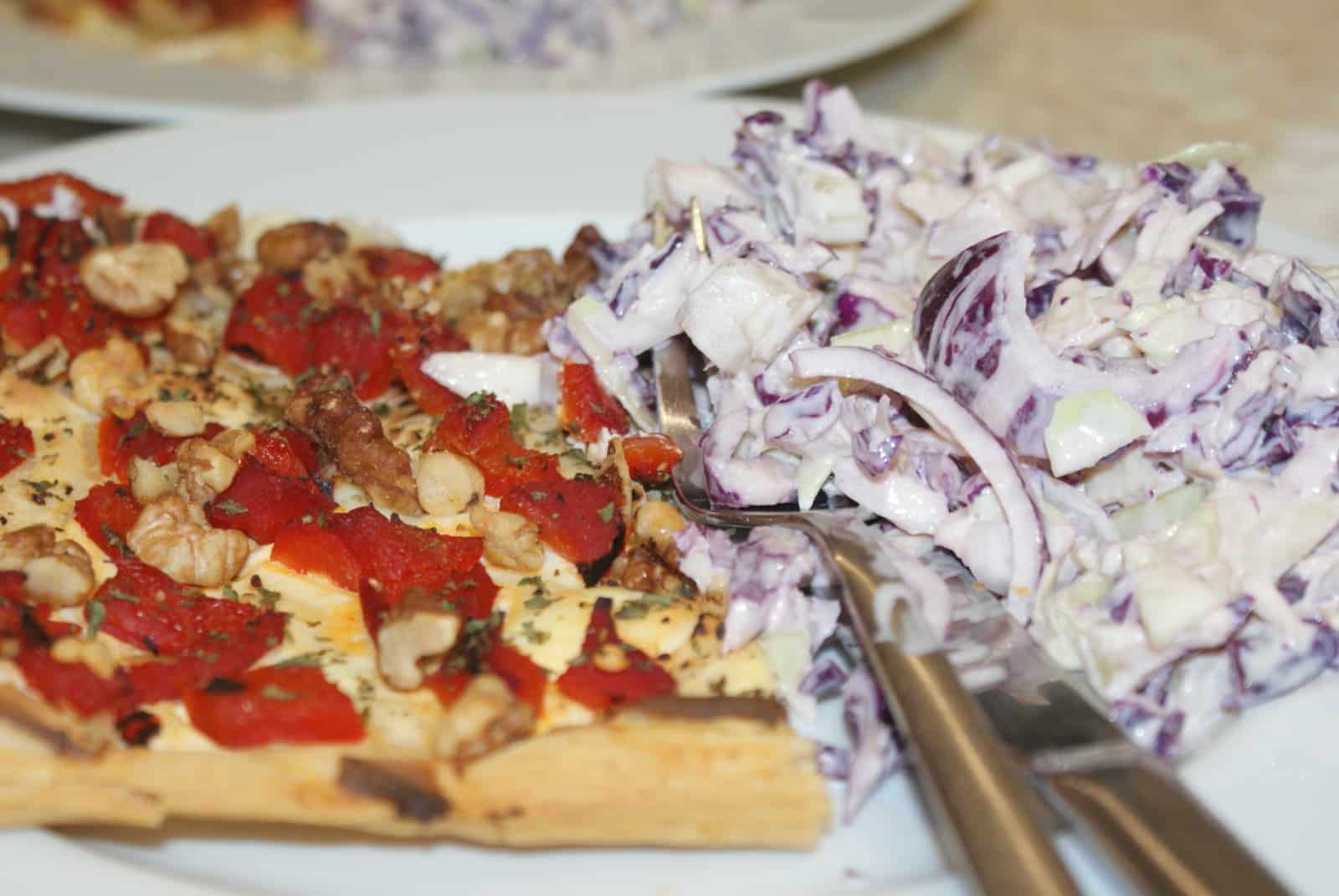 Vegetarian
Servings: 4 people
Cost per portion 52p
Calories: 689kcal
Author: Thrifty Lesley
Click on the check box to cross off Equipment, Ingredients or Recipe Steps completed.
If you click and buy anything, I may get a small commission on the purchase. It won't cost you anything extra. Some are just things that I like and/or use myself rather than necessarily best value 🙂
If you enjoyed this recipe, would you please consider leaving a review? It would really help