Well, where did those last three days go – whoosh.

Finished the Live Below The Line on Monday which was an interesting few days. Some lovely people have donated to ActionAid. Thank you.

Then on Tuesday, I spent the day in Bexhill with DD2. We did some prep for the wedding invitations we are making, more about those another day, when I have more to show.

Then had a wander round the charity shops. I was on the lookout for some fabric with purple and white in it for the quilt I will be making them. This is what I found 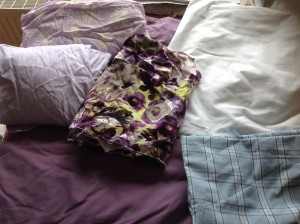 Scored a double white sheet which I earmarked for the backing. Then found the plain purple duvet cover. Excellent! That’s the backing then, and I can use some in the pattern too, and the white sheet for separating strips. The other fabric in the picture is from my stash. It was less than £5 for both items, much cheaper than the charity shops in Heathfield. Can’t wait to get started. My Mum has agreed to embroider something meaningful, names and date of the wedding definitely, maybe something else too. And there is special fabric that I have been asked to incorporate too.

I also got some curtains to use as fabric for quilting. 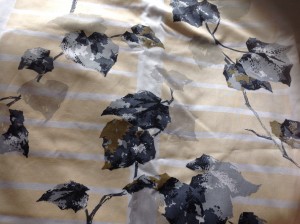 But first, I want to finish off the one Mum made for me. I finished tidying up the edges today, so tomorrow I am going to attempt my first ever gluing together of top and backing sheet.
I will need to clear a huge space on the floor, then lay a blanket down to protect it, ironed sheet on top, ironed quilt on top of that – then try and work out how to spray it together.

On Wednesday, I was in Northiam with a WI friend at a speaker selection meeting. It was the usual mix of good to very good speakers. There was one pretty appalling one, who did a singalong of ancient tunes, and if I say as if we were in an old peoples home, I hope you know what I mean, I’m not poking fun at old people, I’m pretty old myself. The really, really good one was a chap who works at Batemans. He spoke eloquently about Kipling, he was likeable ( and didn’t make any of those truly ghastly ‘mere man’ ‘jokes’ – yuk, so many of the male speakers do do that) introduced gentle humour, didn’t use notes, and was generally very good at what he did.

Back on the food front, I haven’t had pancakes for a while (hahaha – only all last week )so this morning I decided to just try some whole meal ones, just to try them and see what they were like. They were pretty good and would work really well with spinach in them, or tomato purée, or maybe a little crispy bacon.

Yesterday for dinner we had a peanutty noodle dish that I found and adapted on Abel and Cole. I stir fried a red pepper, huge carrot, onion, mushrooms and celery, added some Aldi cooked and frozen chicken, stirred in the sauce and tipped the whole lot on top of noodles. It was very very delicious, so much so that we had it again this evening. I’ll cost it up soon. It won’t be a 50p one, but I may well be able to make it a cheap meal.

Also today, I made a half batch of muffins in a cute heart shaped silicone muffin tin. 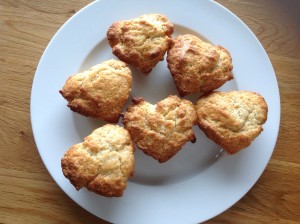 I half filled each hole, then put in a little gooseberry jam, and topped them up so the jam would be in the middle. Cute huh.