Got on really well with the quilt today. I planned to lay it out on the kitchen floor where there is just enough room so I could stick the layers together with temporary sticking spray.

I got it all ready, cleared everything out of the way, swept and washed it and left it to dry. Ironed everything, then laid it out on the floor, but the thought of crawling about, smoothing it all down, made my knees hurt before I’d even got down there. So I abandoned that plan.

We have a table tucked in the angle of the sitting room, so I cleared all the papers off that. Then arranged the quilt so that I had a corner smoothed out on the table top, with the quilt face side down and the backing right side up. Then I sprayed a little of the quilt and smoothed down the backing on top, and moved the whole thing so I could get at another part, sprayed and smoothed, and so on until I had done the whole quilt. The temporary fixing spray is really easy to use, and I could lift any bits I wanted to reposition and re-lay them.

It all seemed to be pretty secure, so I started to ‘stitch the ditch’ to secure it all together. But the thread on my machine kept snapping and it was hard going, and frustrating. A Twitter reader suggested that it might be cheap thread, which it could be, so I shall try another reel, and see how that goes. But not today, had enough for today.

I ordered some wadding for backing two large quilts, and today I pre-washed one of them, ready for using. I shall do the other one in due course.

Yesterday, I bagged up loads of waste from digging the extension foundations and off it went to the dump. There is still loads to go, but I can see where I’ve been, which is cheering.

We have the roof light on now and the chap measured up for the bi-fold doors which will be made and fitted in a couple of weeks.

I’ve been weeding and tidying in the garden too, so it’s starting to look pretty good out there. The new raspberries turned up a while ago, so they are all in now. I love this time of year, when everything is springing into life, blossoming ready for the harvests later on. And there are some flowers in the mix too!

We’re off to Scotland on Tuesday for a few days, stopping over at Kendall for a couple of nights on the way up and again on the way back. It’s a long way from East Sussex! It should be a nice break. 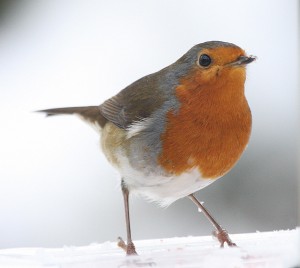 It might help with the robin situation too. Do you remember that we had a robin building a nest in the gas meter cupboard? Well, they abandoned that one and have built one in the insulation exposed when DP removed the soffits for the extension. They fly in and out completely ignoring DP telling them off and saying that they can’t nest there. I stood on a step ladder and peeped in and there is a bird sitting in there, so I think she may be sitting on eggs. I looked it up on Wiki and it says that they sit on eggs for 13 days and that the chicks fledge in 14 days after that. We can leave them undisturbed long enough for the chicks to fledge, before we start taking down that wall. We might have to leave the door open if they are fitted before that.