Have been sat at my desk a lot lately, and just couldn’t face more pc time to do any posts. Been stuck there again today and have been taking breaks to do things like the ironing! Comes to something when the ironing is a break!

Still, was determined to get some exercise in and did a 50 minute walk in lovely sunshine this morning, first thing, with the blackbirds singing away. It was fabulous.

Put the two courgette plants out just now, whereupon the heavens opened and it hailed on them! They still seem to be alright tho. I still have several plants in the greenhouse, so I shall have to see if the girls want one or two. Two plants are plenty for us. Once they get going, they throw courgette up like rockets. 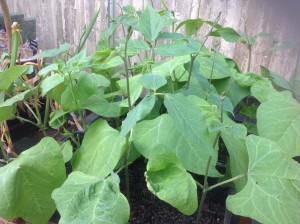 The runner beans are ready to go out now, so I need to get their poles back up, so I can put them in. 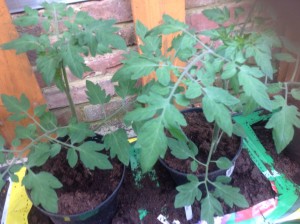 The tomatoes are in their growing bags and doing well.

I have been watching the robins fly in and out, in and out, all day. Every minute or so, one or other of them will fly in, disappear for 15 or 20 seconds, and fly out again. I got some dried mealy worms for them and put half a dozen on the bird table, whereupon a young looking sparrow thought it was his birthday and promptly scoffed the lot! So put a few out the back, very near the new back door, in the hopes that the robins will get them.

I am wondering if the eggs have hatched, as both birds are flying busily in and out. But there is no sign of any cheeping at all.

Vegetable crumble for tea tonight, one of our favourites and something I make often.  We like it with carrots and potatoes, onions and tomatoes, but you could use any root veg that you have. You could also do a ratatouille as the base, that would work well, and is something I have been meaning to try for a while now. Or a meaty one, using up scraps of chicken etc

DP loves his Fruit Crumbles, and even tho we had a savoury one for mains, he still wanted a rhubarb one for pudding. So back up the garden I went to get a couple of sticks of rhubarb. 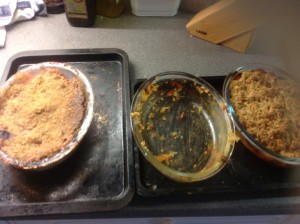 So as I now had three pyrex dishes with crumble in them, I cooked them in the oven, rather than one at a time in the Remoska. So tomorrows dinner is already cooked, although I may have to make another rhubarb one, depends how much of this one disappears this evening!

Had fridge soup at lunchtime. The base was 100g red lentils and a big spoonful of garlic and ginger paste from a huge jar I have, plus a bay leaf from the garden and tsp of turmeric. Then I added some celery, carrots, onions, a solitary lettuce leaf, a softening cucumber quarter, the remains of a bag of radishes and some cauliflower stalks. It was lush.

And oh yes, the radishes. I tried this recipe recently for glazed radishes. They were pretty good. Not a huge amount of flavour, a little like a turnip, but pretty pleasant, and a good way to use up a surfeit of radish. I have used them cooked in a saucepan of mixed veg. Just dropped them in, halved, and cooked them for 4 minutes along with the other veg. They gave a bit of colour and added a nice, mild flavour to a pile of mixed veg. So no need to smother them with butter, just bung them in the pot.

H F-W says he uses the leaves like spinach and wilts them into pasta etc. I tried a leaf raw, but it tasted a bit too much like a leaf from a tree for me. Haven’t tried them wilted yet, but could well be ok as the soup that used them was tasty.

Have you ever had cooked radish or the leaves in anything?

Right, I’m off to do a row or two of quilt