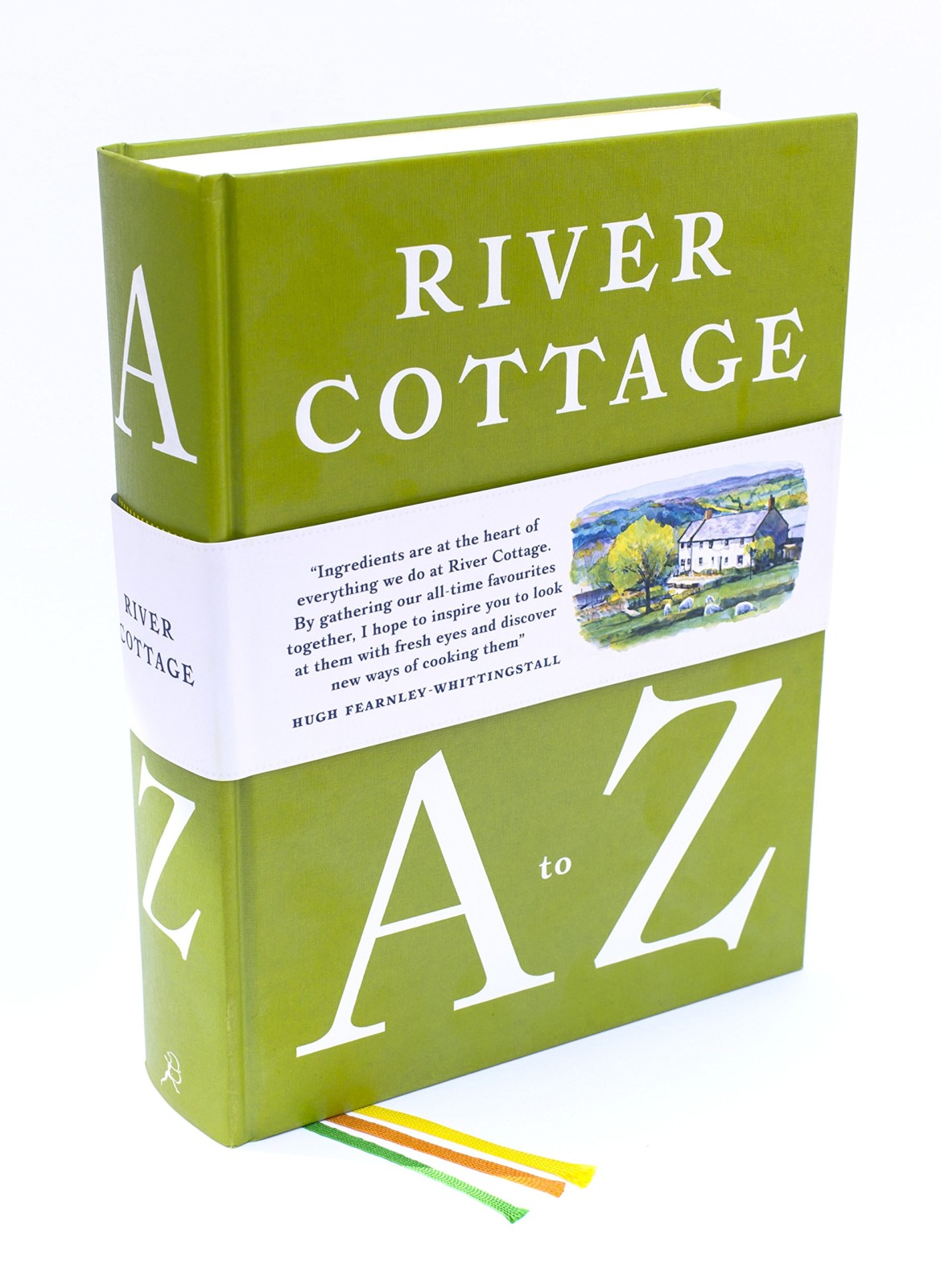 I am rather a big fan of Hugh Fearnley-Whittingstall. Whenever he brings out a new book, I invariably buy it. Not that I need much of an excuse to buy a cook book

I love Hugh’s approach to most things and I really love a great many of his recipes and recipe ideas. I find his writing inspiring.

This one is a positive door stop of a book. Called River Cottage A to Z: Our Favourite Ingredients, & How to Cook Them

It’s laid out with a page per ingredient, in the main, some ingredients are allowed more than one page, but most have just the one. Beautiful photography of course. There is some text about the ingredient, on what it is, how best to use it and interesting things about it. Lots of good ideas and useful snippets. And a recipe using it, along with references to other recipes in the book that also use that ingredient. It’s an ideal book for browsing, not one to read from beginning to end. Although far too heavy to read in bed, where I do a lot of reading!

When the huge parcel containing my copy arrived, I ripped it open eagerly and dived in. One of the many things I read that day was the page for runner beans. Hugh says how nice they are freshly picked from the garden. Isn’t everything! Nothing quite like home grown produce. He talks about stringing beans and how to do it, and how to cut them elegantly. I part company with him over this one. For me, if you have to string a bean, it’s too tough too eat and belongs on the compost heap.

I have never eaten a shop bought runner bean. They were always grown in the garden when I was growing up. An embarrassment of them if truth be told! All the neighbours were practically force fed them! I grow them every year myself and have done almost every year since I had a garden to do it in, impatiently waiting each year for the first beans to be ready. The beans in the shops are invariably massive, overblown things, looking tough and somehow both rubbery and stringy at the same time.

Mum showed me as a child how to prepare runners for the saucepan. She said that if a bean needed stringing, it was too tough to eat and demonstrated how to hold the sharp little paring knife against the side of the bean and press gently. If the bean resisted, it had strings down the side and would be tough, and yes, stringy, to eat. Yuk, bleaurgh and disgusting!  It was deemed unworthy of the pot and was chucked straight on the compost to rot down and help provide lovely rich loam for next years hungry beans.

Over the years, I have tried to make maximum use of my bean crop by trying to preserve them in various ways. I haven’t found anything that gives me something that I like to eat. So I now enjoy them as the seasonal treat that they are, eating millions of them whilst they are around, and then put them to one side until next year. There are always lots of other lovely things to enjoy at their best.

And that new taste?

Hugh said that he often crunches on small beans whilst he is picking them, ones that are still 10cm or less long and very tender. So I tried one today, and not only was it delicious, it tasted very pea-like. Now that was not the flavour I was anticipating. I wasn’t quite sure what to expect, but it wasn’t fresh peas! This means that baby runner beans can be used raw in many recipes bringing a pea flavour to the dish. Fresh, raw peas are in the shops in the summer, selling at quite a high price. I’ve never bought them as I can’t quite see the point. Peas start to convert their sugars into starch the moment they are detached from the plant. So a little pot of podded peas won’t actually be peas at anywhere near their best. I suspect that in fact they might taste rather old and floury, and perhaps even tough, although I’ve not put that to the test. Frozen peas are always fresher, unless you grow them of course, in which case they are divine.

This book isn’t the cheapest one I’ve ever bought, but like many River Cottage books, it’s one I can see myself using again and again

In the meantime, if you still have runner beans to use, here’s a great sounding recipe from it. I shall be trying this before all my beans go all end of season stringy

Top and tail the runner beans, leaving any very small ones whole. Cut into 5mm slices at a sharp angle to get elongated cross sections of bean.

Cook in a little water, or in the microwave until tender, but not soft. Drain well

Meanwhile, melt the butter in a large pan. Once bubbling, add the garlic and cook for half a minute, then add the cream and tarragon.

Once all bubbling, tip in the beans and season well.

Serve with chicken, fish or a pile of puy lentils. Up the cream a bit to use as a pasta sauce. Serves 4

My beans are almost finished now for this year. But next year I will be picking some of them extra small and using them sliced small as a much cheaper alternative to fresh peas in summer salads. Mmmm, can’t wait!