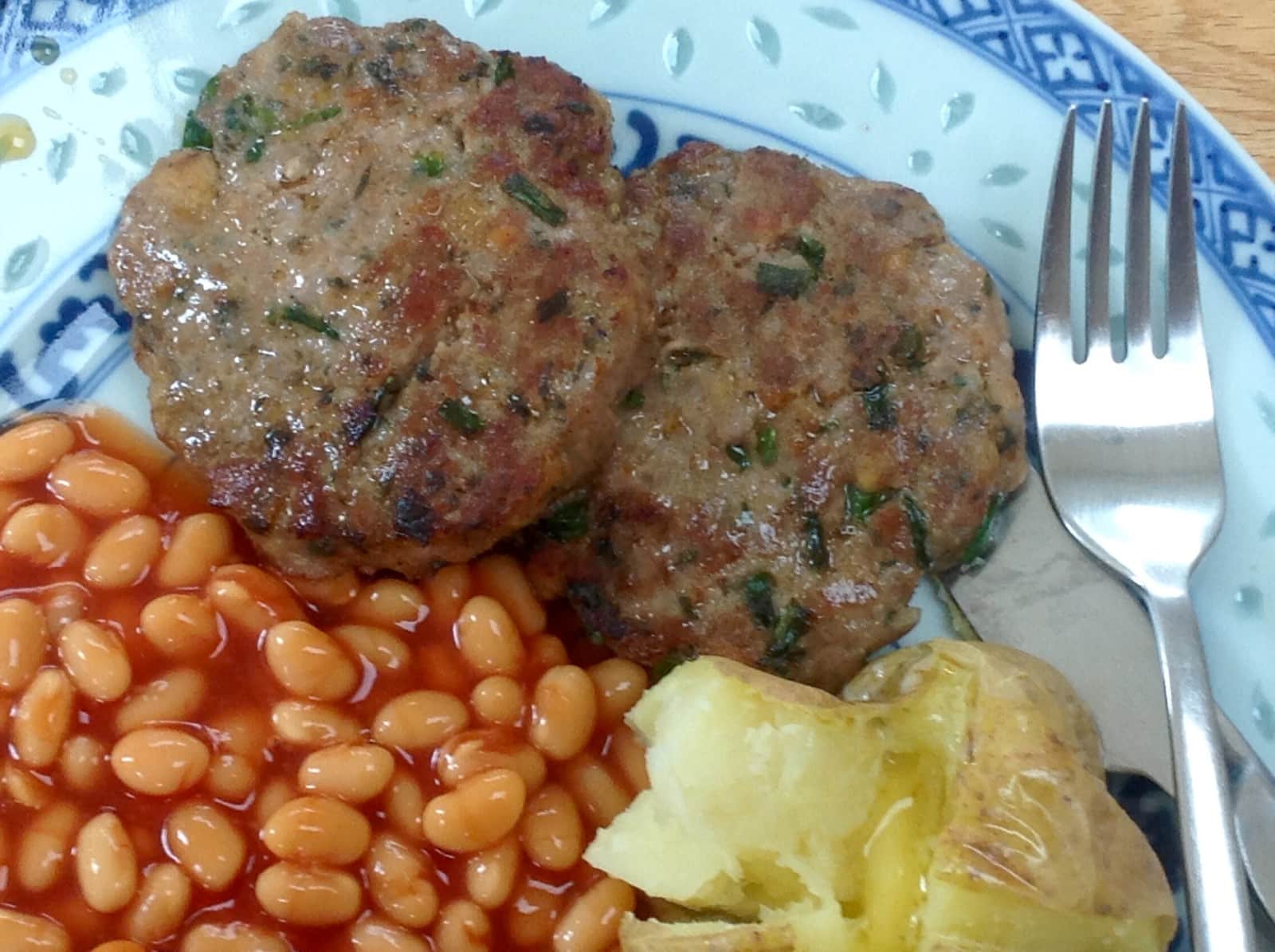 I have been fancying for a while having a go at making sausages, and this week, I did just that.

I was in Sainsburys and thought I’d get some pork to make some. I picked up a shoulder joint that had been reduced and looked at the back of the pack and it said that there were nitrates in it! In a joint! I had no idea that joints could contain additives like that. I knew that meat can be full of water, and a protein of some kind to make the water stay in.

So rejecting the joint, I picked up a pack of pork mince and after carefully reading the pack, popped it in my basket. It could still have additives of course, being minced meat, they may not need to declare them.

Once you are happy with your mix, shape it into whatever you want it to be. In the absence of sausage skins, I used a burger press that I have had for ever, to make patties that I could separate with the waxed discs that come with the press. I could have added those chive flowers too couldn’t I.

You can make thicker or thinner patties, tiny little ones for littlies. Or walnut sized pieces to use as meatballs or with pasta. The first one I had, I ate it in a burger bun with coleslaw on the side. And very nice it was too.

Just like a good quality bought sausage! I was very pleased with these. They were super easy to make and I know exactly what’s in them

Variations for your home made sausages

Curry spices would be lovely. I don’t like it myself, but I know that many people like apple in their bangers. If you need to make gluten free ones, this would make it very easy, just use a gluten free filler. That filler could be oats, or some dry sage and onion stuffing, as well as any kind of bread. I just used some of the breadcrumbs from the freezer.

Black pudding mixed in would be fab. Some of the freeze dried veg powders I have would work well here too. I used some of the onion powder mixed into butter to spread on some tomato scones yesterday. They were really good. The onion powder, tomato powder or kale powder would all add interesting flavours to a sausage pattie. In the absence of freeze dried powder, you could use chopped sun dried tomatoes, grated carrots, fine chopped onion, a good dollop of Brinjal pickle, or Branston. Have a look in the store cupboard and see what you have. 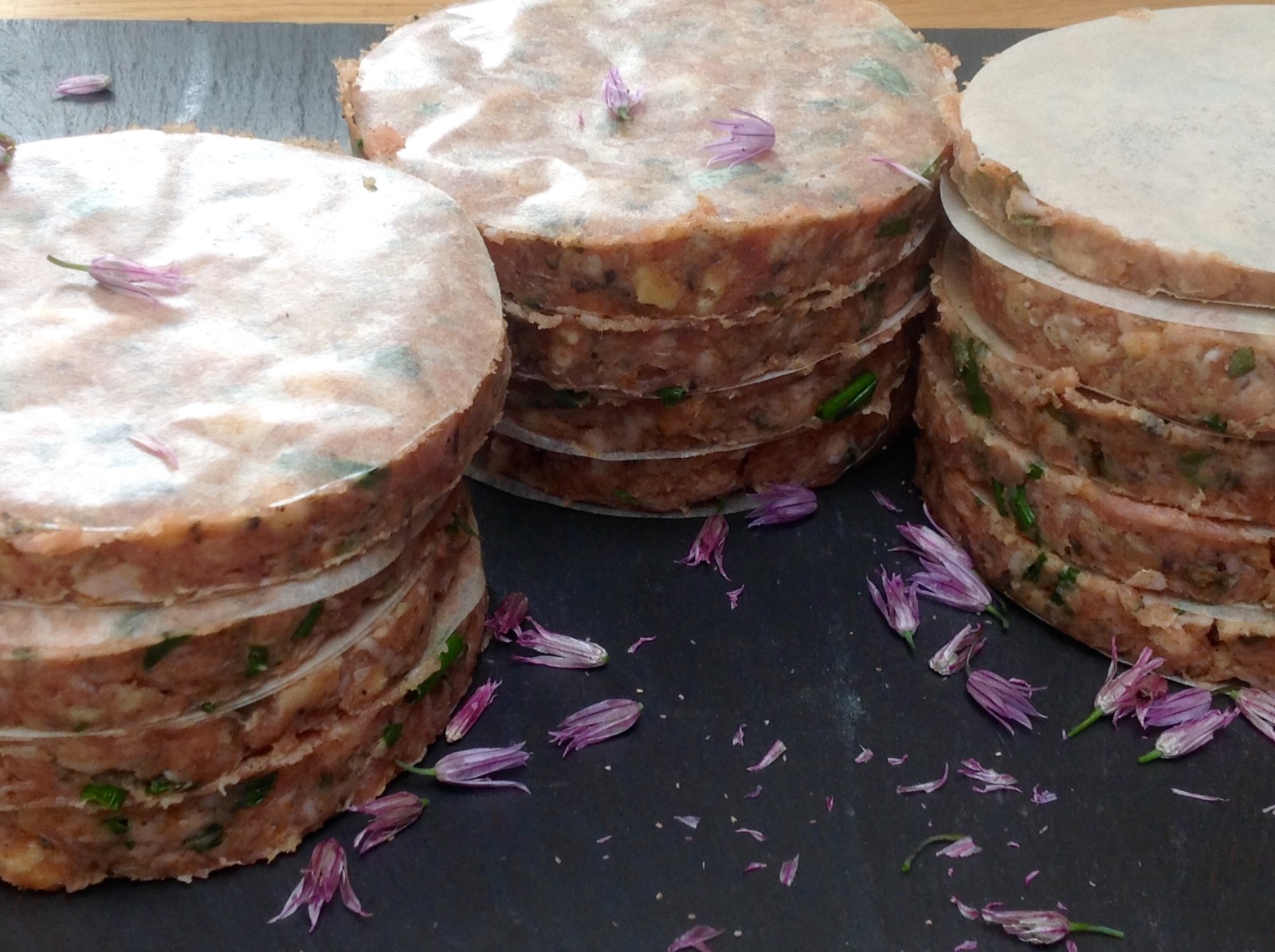 You may or may not remember that there is a lot of bowel cancer in my family. Most of my Dads brothers and sisters, and we think his Dad too died from it. The recent advice from dietary experts says that most people should minimise consumption of processed meats because, amongst other things, of the nitrates contained in them.

This means that sausages, chorizo and bacon are pretty much off the menu for me. This is partly why I wanted to have a go at making sausages at home. I do like to know what’s in what I eat.

Next time I’ll go to my local butcher, and get some higher welfare meat to make these 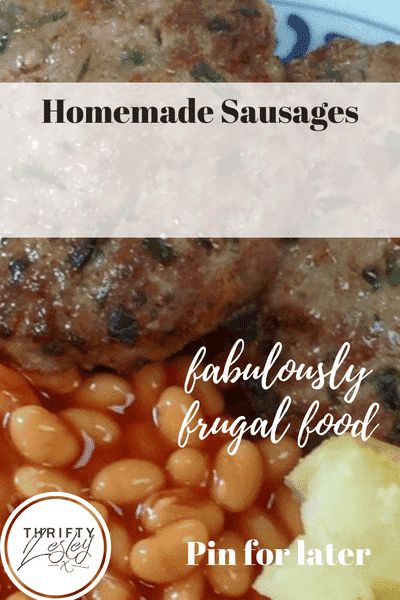 you know what's in them!
No ratings yet
Print Recipe Pin Recipe Share by Email Share on Facebook Comment My Recipes Go to Collections
Prep Time: 10 mins
Cook Time: 10 mins
Total Time: 20 mins
Course:
Dinner
,
Lunch
Cuisine:
English
budget meals
,
cheap family recipes
,
savoury
,
spiced
,
spicy
Servings: 13 sausages
Cost per portion 17p
Calories: 183kcal
Author: Thrifty Lesley
Click on the check box to cross off Equipment, Ingredients or Recipe Steps completed.
If you click and buy anything, I may get a small commission on the purchase. It won't cost you anything extra. Some are just things that I like and/or use myself rather than necessarily best value 🙂
If you enjoyed this recipe, would you please consider leaving a review? It would really help

You can make thicker or thinner patties, tiny little ones for littlies. Or walnut sized pieces to use as meatballs or with pasta. The first one I had, I ate it in a burger bun with coleslaw on the side. And very nice it was too.