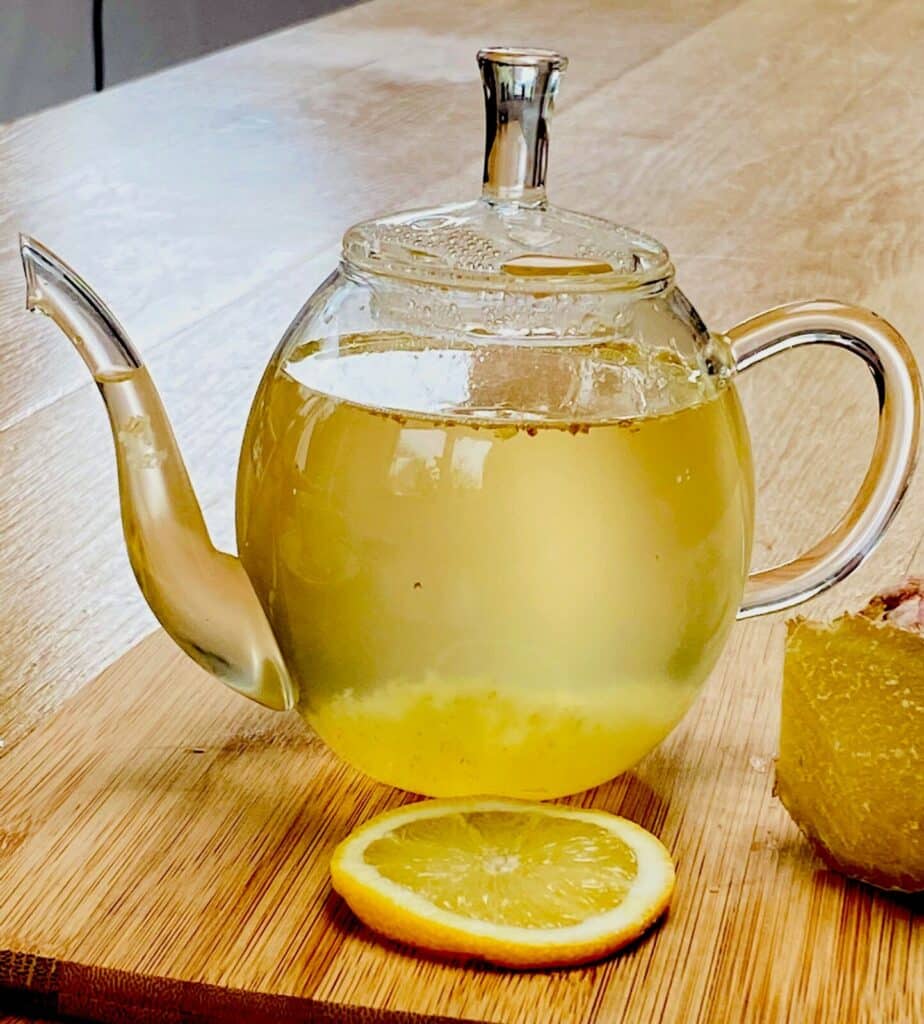 How To Make Hot Ginger Tea 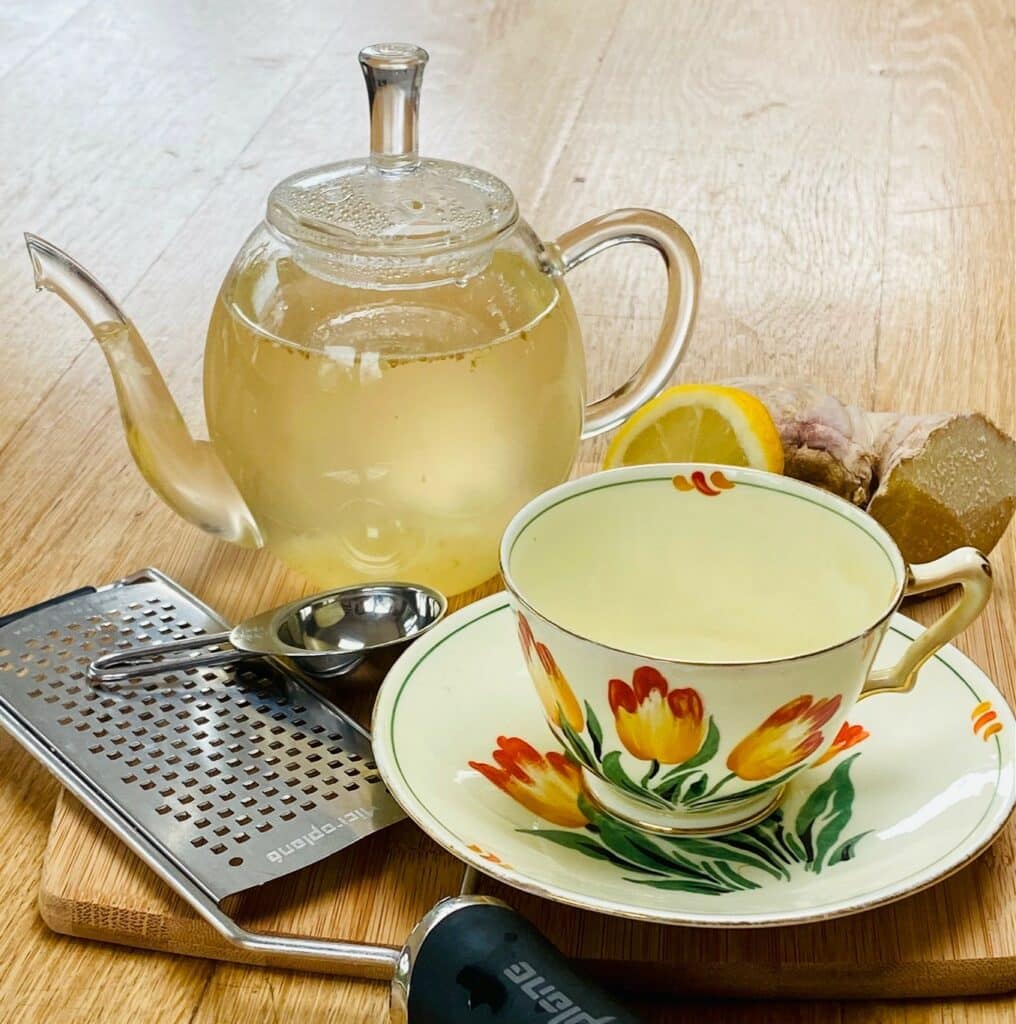 I use a small glass tea pot of 450ml to make fresh ginger tea.

By far the easiest way to store it is freezing fresh ginger whole. I pop it in just as it is – not wrapped, not peeled, and grate it on a fine grater straight out of the freezer. It keeps for months that way and is very convenient. You can use the finest side of a box grater, or I prefer one like this. I just find it easier with something like ginger, for garlic cloves and zesting a lemon.

Using the finest side of a box grater, grate enough ginger to fill a tablespoon for a pot of this size. No need to peel the ginger first. Put the ginger in the teapot and pour over boiling water. Leave to steep for several minutes before drinking. Use of a strainer when pouring into your cup will avoid shreds of ginger floating around. 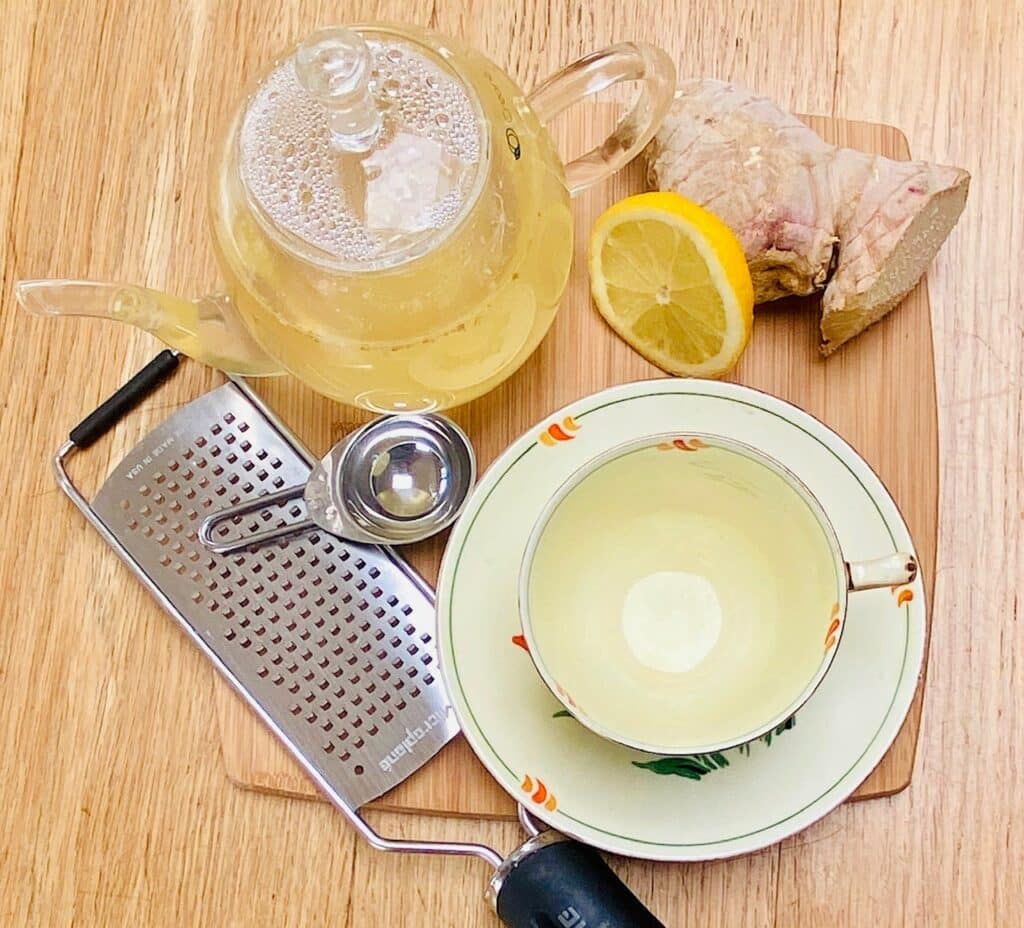 Western societies consume huge amounts of caffeine. Carbonated cola drinks have lots of caffeine. We are constantly urged to drink brewed coffee from coffee shops and it is the norm to provide tea and coffee at many business meetings and social occasions.

Then there is chocolate, many many things with chocolate. It is everywhere, in breakfast cereals, ice cream, many desserts, chocolate spread etc etc.

Caffeine is a stimulant and can interfere with your sleep. Personally I cannot tolerate it at all and even a small amount will see me sleepless literally all night.

I drink Red Bush tea which is naturally caffeine free, and sometimes I will make myself a little pot of herbal or spice tea using herbs from the garden, and spices from the larder.

This ginger tea has become one of my favourites. Ginger has no caffeine at all, so I can enjoy it freely.

Is ginger tea spicy? No, it isn’t spicy at all. Ginger doesn’t have enough heat in it to transfer that to a tea at these concentrations. I have left the remains of a pot of fresh ginger tea overnight and warmed it up the next day. Even after all those hours of steeping, the tea was not spicy hot.

Having said that, I tried ginger tea using a teaspoon of dried ginger in place of the tablespoon of fresh ginger. That was spicy warm and rather wonderful in a different way to the fresh ginger. 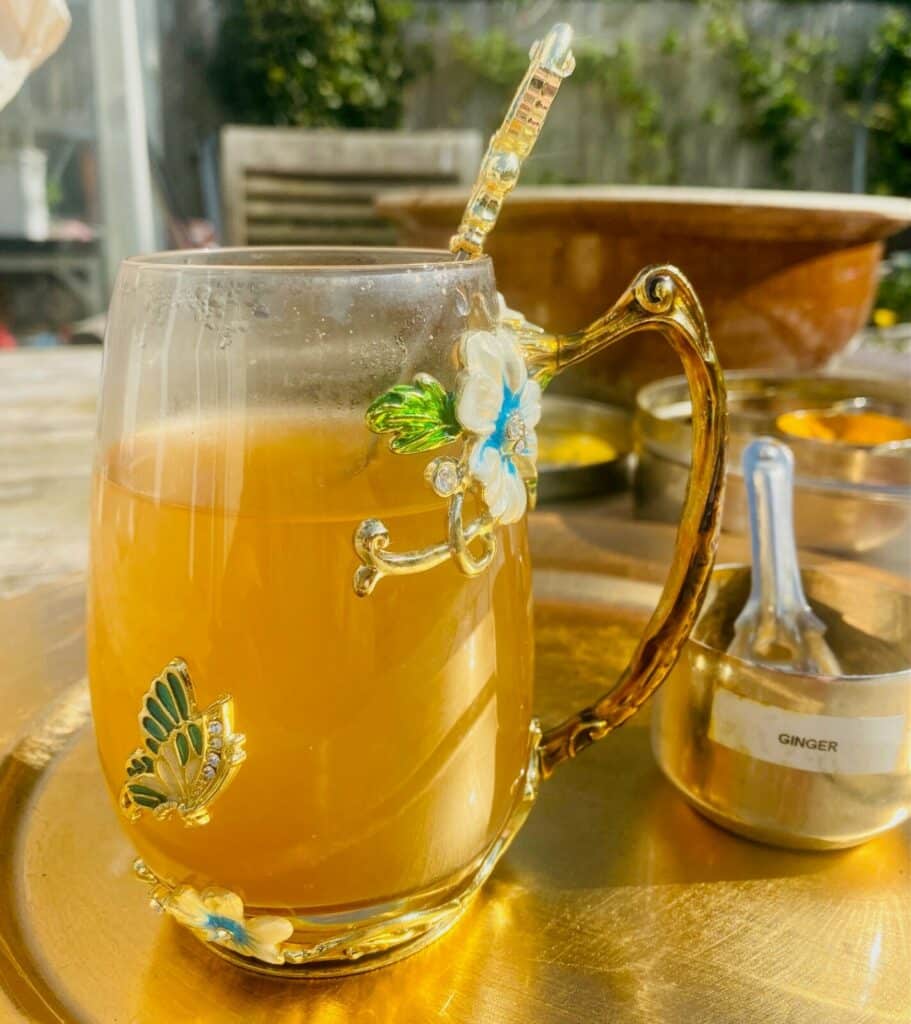 Although Wikipedia states that use of ginger does not reliably ease nausea, many women have a dry ginger biscuit or a cup of ginger tea first thing in the morning when pregnant to help with morning sickness.

Ginger is often used to soothe an upset stomach and can help reduce the production of stomach acid. My daughter, Mother and sister have acid stomach issues and find that lemon juice in water, either iced or as a tea, help to reduce and even eliminate symptoms. Similarly, ginger tea has the same kind of effect, getting rid of bloat and gassiness.

Evidence that ginger helps alleviate nausea and vomiting resulting from chemotherapy or pregnancy is inconsistent.

There is no clear evidence that taking ginger to treat nausea during pregnancy is safe.  There is some evidence for it having an anti-inflammatory effect, and improving digestive function.

A 2018 review found evidence that ginger could decrease body weight in obese subjects and increase HDL-cholesterol.

What Changes Can I Make 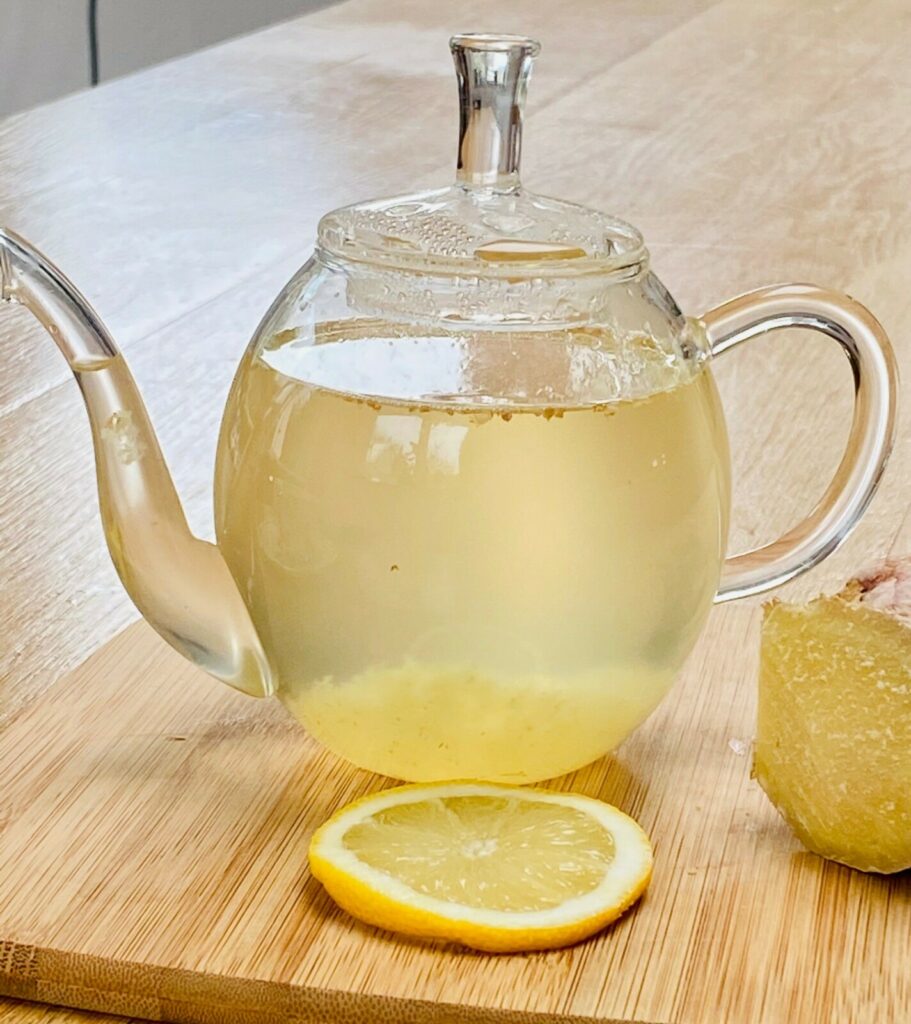 It’s nice to add a slice of lemon to a pot of fresh ginger tea, and many people add a little honey for a touch of sweetness.

Or you could try a little of any other sweetener – agave or muscovado for instance. Not too much, the idea of a herb tea is to enjoy the herb flavour rather than a sweet drink.

I have tried star anise which was lovely. Needed more star anise than I thought in my small tea pot, about 6 of them.

Mint from the garden, or lemon balm, are also very good. Although, again, you need quite a lot of it.

I’m intending to try other things in the spice cupboard and the herb garden:-

One I won’t be trying is chamomile. I dislike it as, to me, it tastes like wet hay from a field. I know many people love it, but that one is not for me.

Instead of a comforting cup of hot ginger tea, or any other variation, if the weather is hot, you could brew it, allow to cool, then serve in a tall glass with ice and a lemon slice on the rim. Lovely!

If you like to peel your ginger before use in cooking – the peelings make a wonderful pot of ginger tea. Love your leftovers!

Other Uses For Ginger

When researching for this post, I came across a mention of ginger ice cream. Oh, yes please! I’ll def be trying that! 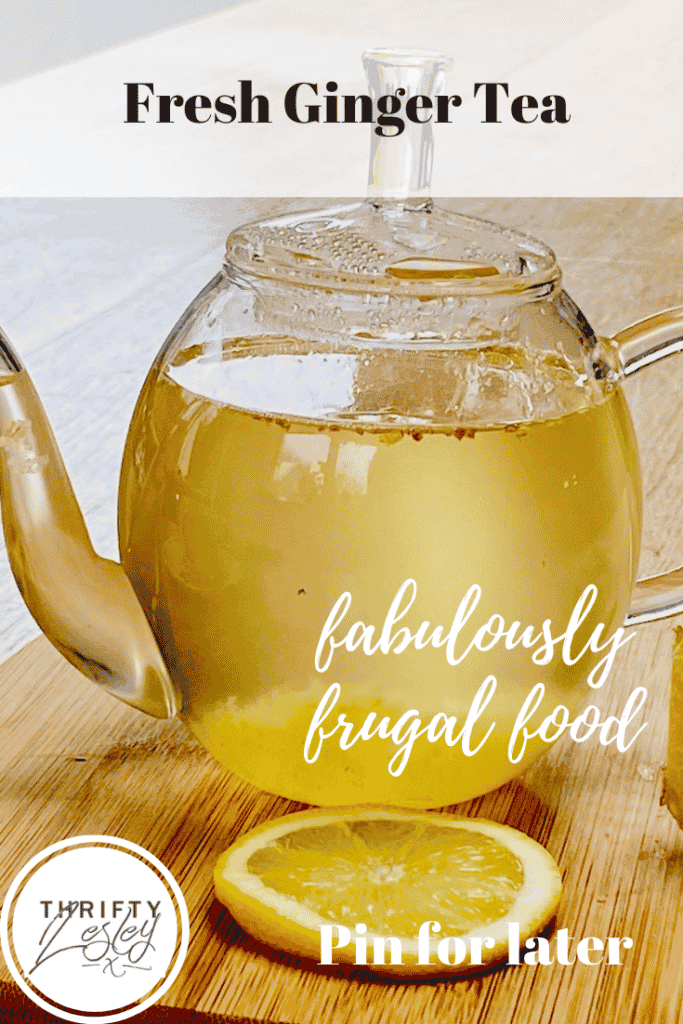 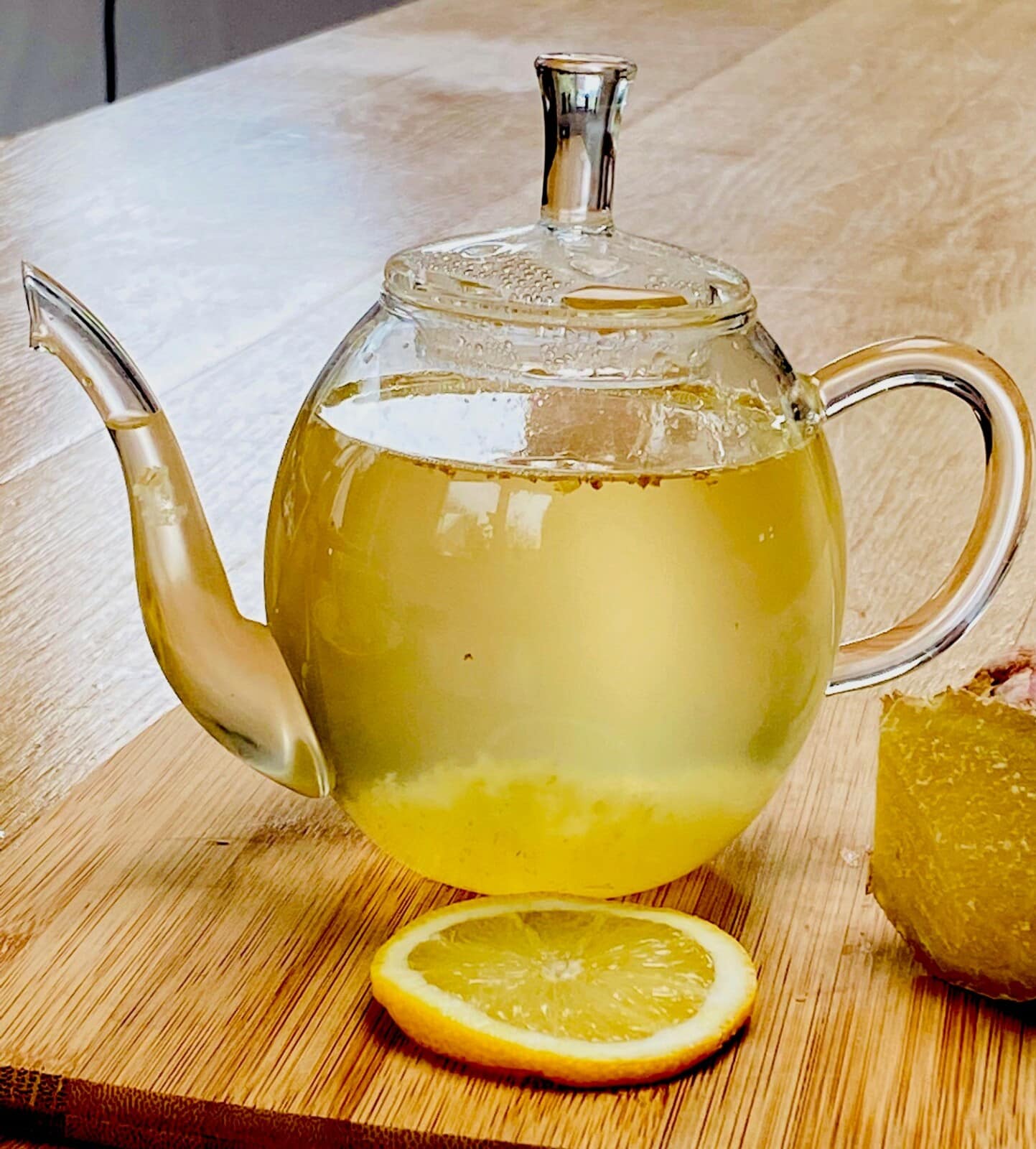 For a spicier hit, use a tsp of dried ginger per 450ml boiling water. If you like to peel ginger when cooking, the peelings can be used here to make a lovely pot of fresh ginger tea.