We decided to have some rainy day fun today

We decided to have some rainy day fun today 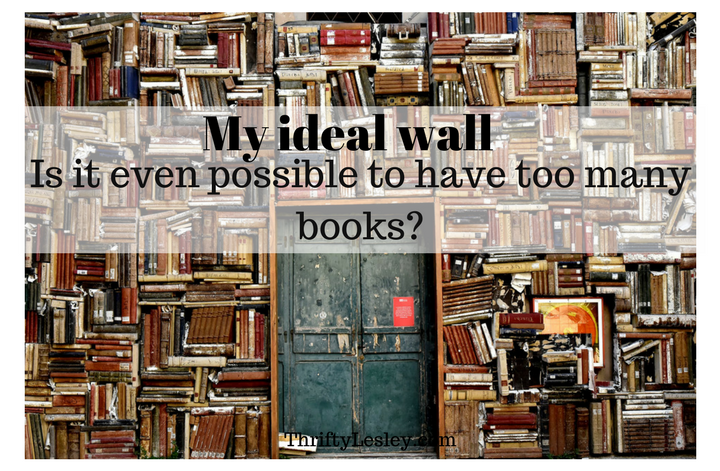 Today is wet, wet, wet and we decided to have some rainy day fun.

We visited a town we haven’t been to before. First up, we had a big cooked breakfast, which neither of us usually do. After taking our time, reading the papers at the pub we were in and sitting gazing out the window at the rain, it was still persisting down, so off we ventured and had a look around an undercover market, which always whiles away an hour or so. Interesting things, beautiful things, ugly things, who on earth would pay good money for that things. Stall holders are often good for chats about subjects I normally wouldn’t chat about and we emerged refreshed and stimulated.

Going to the movies

So we decided to go to the noon showing of a film. There were an awful lot of children’s films, a couple of other films I fancied, but Mike didn’t, so we ended up seeing Valerian and the City of a Thousand Planets.

It had pretty mixed reviews and having now watched it, I can see why. It’s not the most memorable film I’ve ever seen. The special effects are, as you might imagine, pretty awesome, and especially if you see it in 3D. We didn’t, as the earlier showings were in 2D. The acting of the two main leads is wooden, unbelievable and although the characters are a couple, there is zero on-screen chemistry between them. There were parts I liked, parts I didn’t. I was aware of the main leads acting much of the time and whenever Cara Develingne was shown walking (often) I imagined the modelling runway, and every time the leading man was dominant, it reminded that he looked like an adolescent, more suited to a teen movie, rather than a man, thinking about marriage. Took me out of the plot somewhat!

The scenes in the market were good, and the older characters in the film much more believable, taking me along with their part in the film. And the SFX of course. The dispossessed aliens were fascinating, I was imagining their society, watched their body language, all sorts of things. On the whole though, I cant recommend you see this, in my opinion, not worth the price of the ticket.

Feeling rather disappointed, we mooched off and decided to have a late lunch. Found a good looking Italian with some very Italian looking lasagna in the window. We had the beef lasagna because it had at least 15 layers of pasta and we reasoned that the proprietors were, in all likelihood, Italian, and that it would be authentically good. Oh me oh my! The family originally come from Naples, the home of lasagna, and yes indeed, it was very very good indeed. I was pretty full, but Mike had 3 different types of gelato to follow, which they also make themselves. I tried a tiny spoon of each one, and yes, super super nice.

Apologies, too busy filling my face to remember to take any pictures

Mooching onwards, we came across an Oxfam shop that sold mainly books, cds and vinyl, and games. Oooooooh. Inwards! We spent ages in there, and I could have taken most of the flipping shop home with me! What a great selection of books. Bit on the pricey side for charity shops/second hand, but it’s for charity, so what the hell.

I came out with this pretty haul, there were many more I lusted after, but only so many books I can buy in one go. 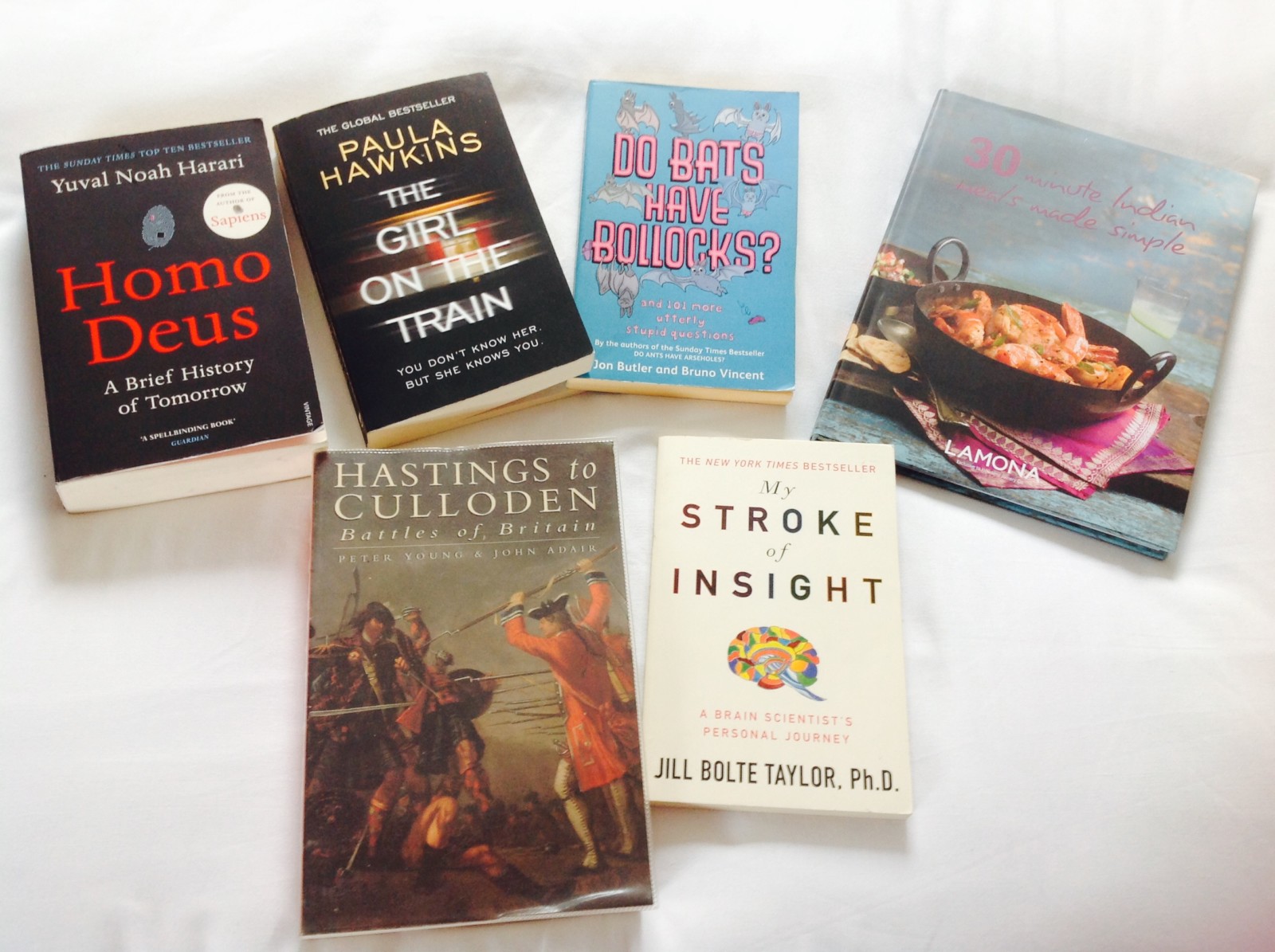 Homo Deus, A brief history of tomorrow, is by Yuval Noah Harari.

I spotted this in Asda this week, when looking for something else and thought it looked like a good read, so when I saw it today, well, I was meant to have it wasn’t I!

The flyleaf says the book ‘explores the projects, dreams and nightmares that will shape the twenty first century, from overcoming death to creating artificial life. It asks the fundamental questions: where do we go from here? And how shall we protect this fragile world from our own destructive powers?’

My stroke of insight, by Jill Bolte Taylor, is the personal journey of a brain scientist before, during and the long road after experiencing a stroke following a catastrophic burst blood vessel in her brain. This promises to be fascinating.

The Girl on the Train, Paula Hawkins, is a book I have been meaning to read for ages. It has had very good reviews, and of course, been made into a film (which I haven’t seen) so I’m hoping I will be able to get lost in the moment with this.

The somewhat eye catchingly titled Do Bats Have Bollocks is from the popular Corrections and Clarifications page of Old Git magazine and consists of answers in equal parts witty, informative and made up.

Hastings to Culloden (Battles of Britain), Peter Young and John Adair looks an interesting read as part of my ongoing attempts to inform myself. First published in 1964, so nearly as old as me! Third edition in 1996, but the events are not likely to change are they!

And finally, because I find them irresistible, a cook book. You can never have too many cook books, or you’d definitely think so if you saw my book shelves! This one is 30 Minute Indian Meals Made Simple, from Howdens Joinery of all places, somewhere I associate with ready built kitchens, not recipes! Although I suppose the link is obvious.

This one has several recipes I want to try after the merest flick through. Beetroot and coconut curry; Upma, a savoury breakfast dish based on semolina; mushroom and cashew korma, although the recipe uses korma paste rather than tells me what spices to use, I daresay I could find that out elsewhere; a very lovely looking Rajma, a Northen Indian dish with lots and lots of spices and the most gorgeous coriander and coconut chutney. It uses fresh coconut which isn’t particularly convenient for most people most of the time. I checked in mySupermarket, and whaddya know, Tesco lists it, but who knows if many shops stock it. I’ll experiment and let you know if I can get a good result using some other form of coconut

Gleefully carrying my loot, we wended our way back to basecamp. I want to read all of them. Right Now. All At Once. Books are a massive part of my life, always have been. Pre internet, I treated some books as part of my memory, always there to be consulted. Although I am perfectly aware that I don’t need any recipe books at all, anything I could possibly want to cook is available on the web. It’s just not the same as a lovely book to turn the pages of, write notes on little bits of paper and bookmark a page with, and no, I certainly do not write in the margins, nor do I turn down pages, I couldn’t bear too. Novels are to get transported to a different life, to explore emotions and feelings, to make me think, laugh and cry.

So that’s what we did on this wet and rather dismal English summers day. What about you, what did you get up to?

If you click through any of the links to Amazon and end up buying any books, or anything else, I will get a small commission. It doesn’t cost you any extra, and anything I get all goes towards keeping Thrifty Lesley running. I’ve not made any commission at all yet, so it’s not a major thing and I hope it goes without saying that I don’t want you to feel obliged to do anything