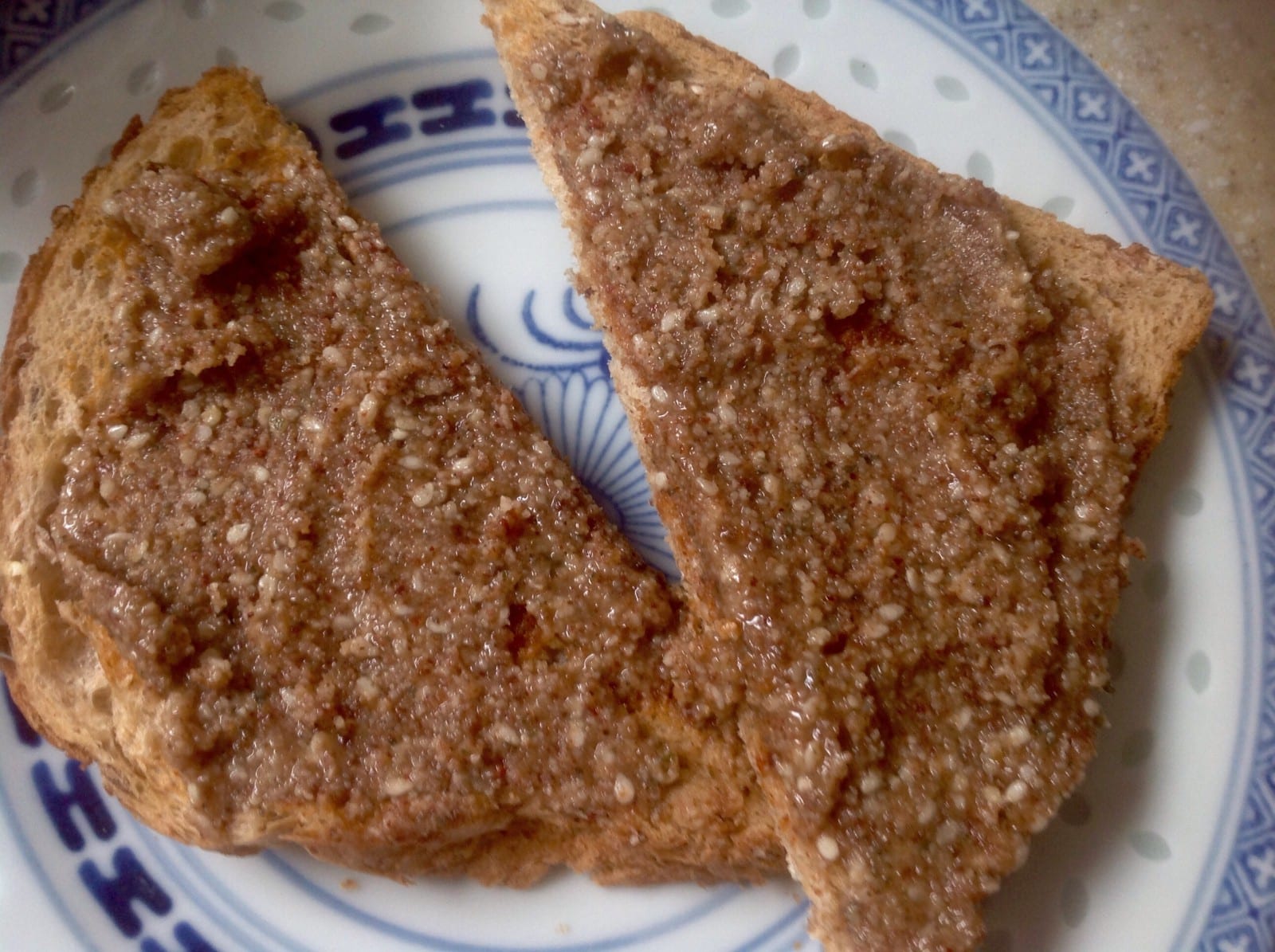 Part 4 of our attack on those Christmas leftovers.

Chestnuts, and no stuffing

Don’t know about you, but I always buy several packs of ready to eat chestnuts. I didn’t even make any stuffing this year

. One of the things that I will use a packet for is this wonderfully toothsome soup by Nigella Lawson, from How To Eat, which I think is her best book, crammed full of wonderful recipes and equally wonderful anecdotes and stories to make 4 generous servings

Saute all the veg in the fat until soft. Add everything else and simmer for 20 minutes. Whizz smooth

you can taste the fat in this, so using one with lots of flavour does make a difference.

I have used both stock and just water in this, it obviously tastes different, but both were lovely.

As well as this wonderful soup, chestnuts work really well with pasta. Cook up some value penne and add in a sauted onion, some shredded, lightly cooked cabbage and some chopped chestnuts, with maybe a few chopped sundried tomatoes, some of their lovely oil and a small handful of raisins. If you don’t have any tomato oil, drizzle on some good olive oil. Season well and enjoy – yum

The nuts languishing, forgotten, in the fruit bowl

Many crumble toppings are enhanced with the addition of a few chopped nuts, toast them first to really bring out their flavour. See this post for loads of ideas on fruit bottoms, and nutty tops. In this context, I would go for an apple crumble with walnuts in the topping, served with thick greek yogurt with muscovado sugar melted in. For the brazil nuts, a pear crumble with the brazils in the topping, served with custard with cinnamon stirred through, or maybe the cinnamon in the topping. For those little hazlenuts, shell them all, toast the nuts and use scattered over winter salads

Nuts from the Armageddon cupboard

Yesterday, I decided to use up some nuts from the Armageddon cupboard. I found some ancient raw, redskin peanuts that desperately needed using, so decided to make a mixed nut butter. There was a bit of a bag of mixed nuts to use, a tablespoon of pine nuts, even fewer toasted flaked almonds and a handful of Brazil’s. I popped the whole lot under the grill to toast, then left them to cool.

Once cool they went straight into the food processor. Then I decided to add a few sesame seeds as I have a large bag I’m working my way through, then I added some pumpkin seeds that had got a bit old. After that, I decided to add some raisins as I fancied having that sweetness in there.

Then they were processed for several minutes. I had to stop the machine and take out half as the mixture was a lot more than I had anticipated making after all the additions.

Then more processing. It really does take several minutes, then gradually breaks down into a peanut butter type texture. You need to be patient with this, it seems for quite some time that it isn’t going to work, then it suddenly does.

By this time, I was tasting it, and decided that I had made so much, I would add some other things to some of it. After a quick rummage in the cupboard, I added a good splash of dark soy sauce and a couple of tblsps of lime juice. Mmm, super yummy, I know what I’ll be having for breakfast tomorrow 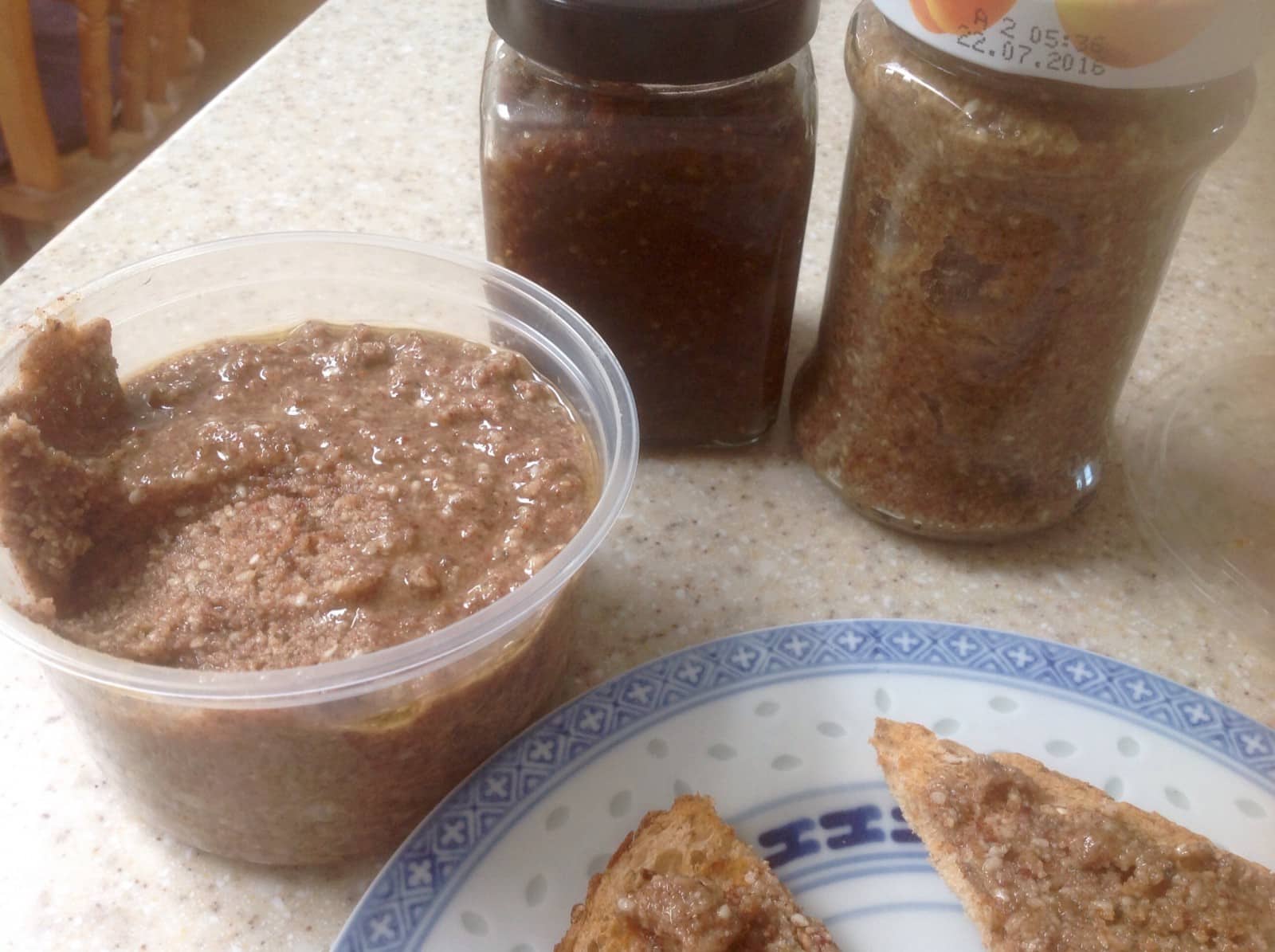 The advantage with making your own nut butter is that you know exactly what has gone into it.  It isn’t cheaper than the value peanut butters, but it can have other things in it, like the seeds and dried fruit I added to mine, and made with no salt or added sugar if that matters to you

The last one I bought was from the Co-Op and it lists the ingredients as roasted peanuts (95%), brown sugar, palm oil and salt. I deeply resent being essentially forcefed palm oil. It seems to be in everything. It’s showing up more now as regulations have changed so that where before palm oil has been listed as vegetable oil in products, now producers have to specify what oil has been used

I don’t like having it because it is a saturated fat, it is used to replace the extremely unhealthy trans fats, but

The USDA agricultural research service states that palm oil is not a healthy substitute for trans fats.[28] (Wiki)

Palm oil is also an important source of calories and a food staple in poor communities.[54][55][56] However its overall health impacts, particularly in relation to cardiovascular disease, are controversial and subject to ongoing research.

Much of the palm oil that is consumed as food is cooking oil, to some degree oxidized rather than in the fresh state, and this oxidation appears to be responsible for the health risk associated with consuming palm oil.[57] (Wiki)

and that’s not even touching on the environmental concerns over its production. For me, one of the good things about home cooking is being able to choose the ingredients, and this is another of those times.

Today, I had a baguette end to process into breadcrumbs. Rather than put them in the freezer, I made some zombie burgers. To the breadcrumbs were added; some cooked brown lentils; a bit of turkey from the freezer, chopped up small; and some veg which was cooked in the frying pan first using some of the turkey fat stashed in the fridge.  They smell really good, and the bowl of seasoned mix tasted rather special too. Really looking forward to a couple of those this evening. I’ll be frying them in some more turkey fat too for even more flavour. 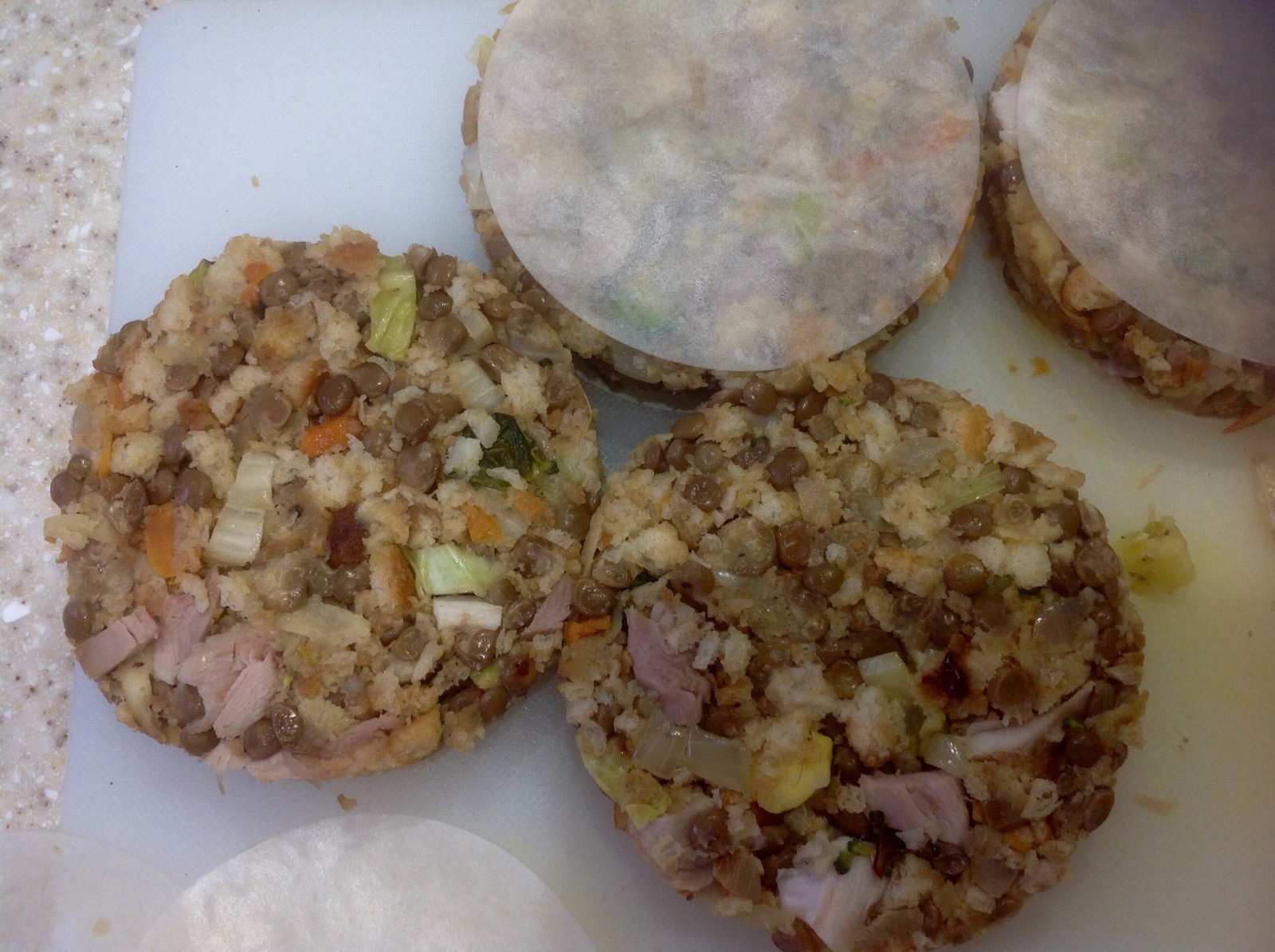 Other ideas for leftovers

Christmas Leftovers – part 6. Ten ways to use up that surplus bag of Brussels sprouts lurking in the fridge 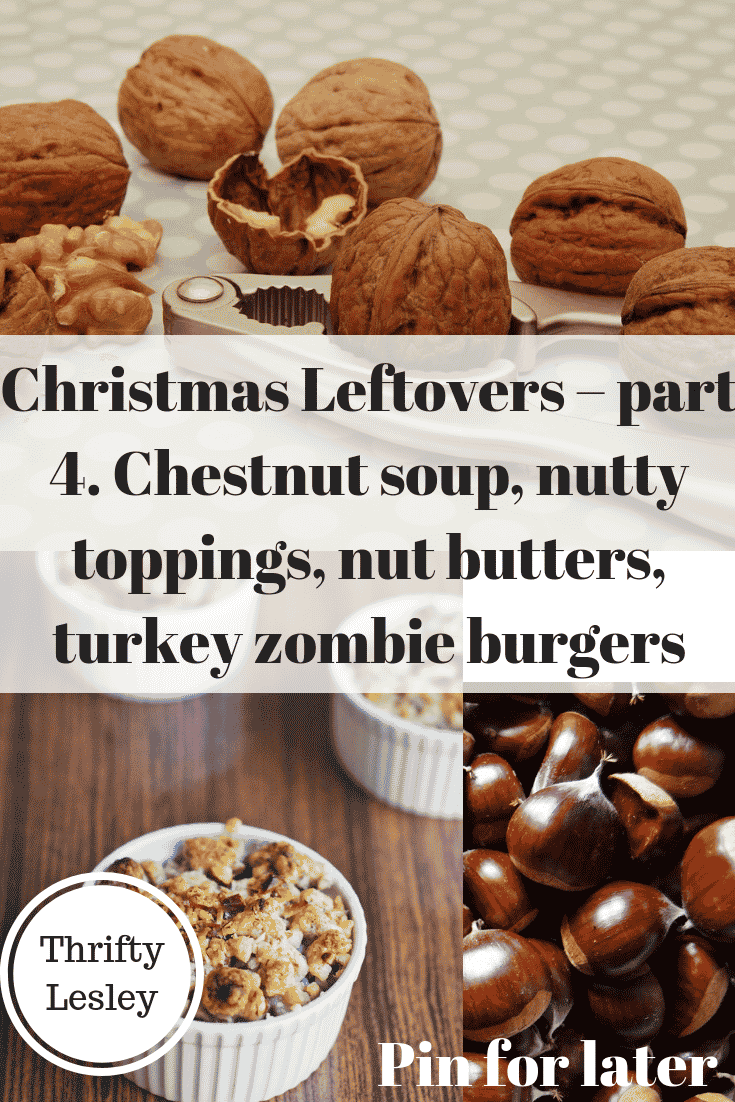