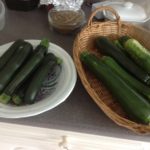 This is the courgette harvest today :o, I only  have 2 plants, but they are like firecrackers at the moment, throwing off courgettes that would turn to marrows as soon as I turn my back. Managed to catch them all at the small and tender stage so far.

So more slow cooked ones I think, with pasta and on a jacket potato – shame I can’t put them in a sandwich 🙂 . Think I might do Jack Monroe’s Courgette, Sultana & Lemon Bread, and some of her Creamy Greek Cheese and Courgette Pasta. By the time I have used up all those, there will be another big basket to use! 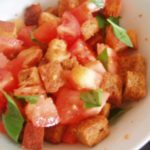 Had a hard baquette end to use up today, and some (bought) tomatoes that had been left and were now very soft, so had Panzanella again for lunch – yummy

We have some Minarette fruit trees in the front garden, they are the type that grow 2 feet wide and about 8 feet tall. Two of those are plum trees and they have set a lot of fruit, and dropped quite a few today. So I gathered them up, stewed them until very soft and pushed as much as I could through a sieve. They were obviously mainly stone, but even so, I got a small pudding dish of puree. It is rather bitter, so I put some sugar in and it should be really nice in some thick yogort. I’ll try it tomorrow at breakfast