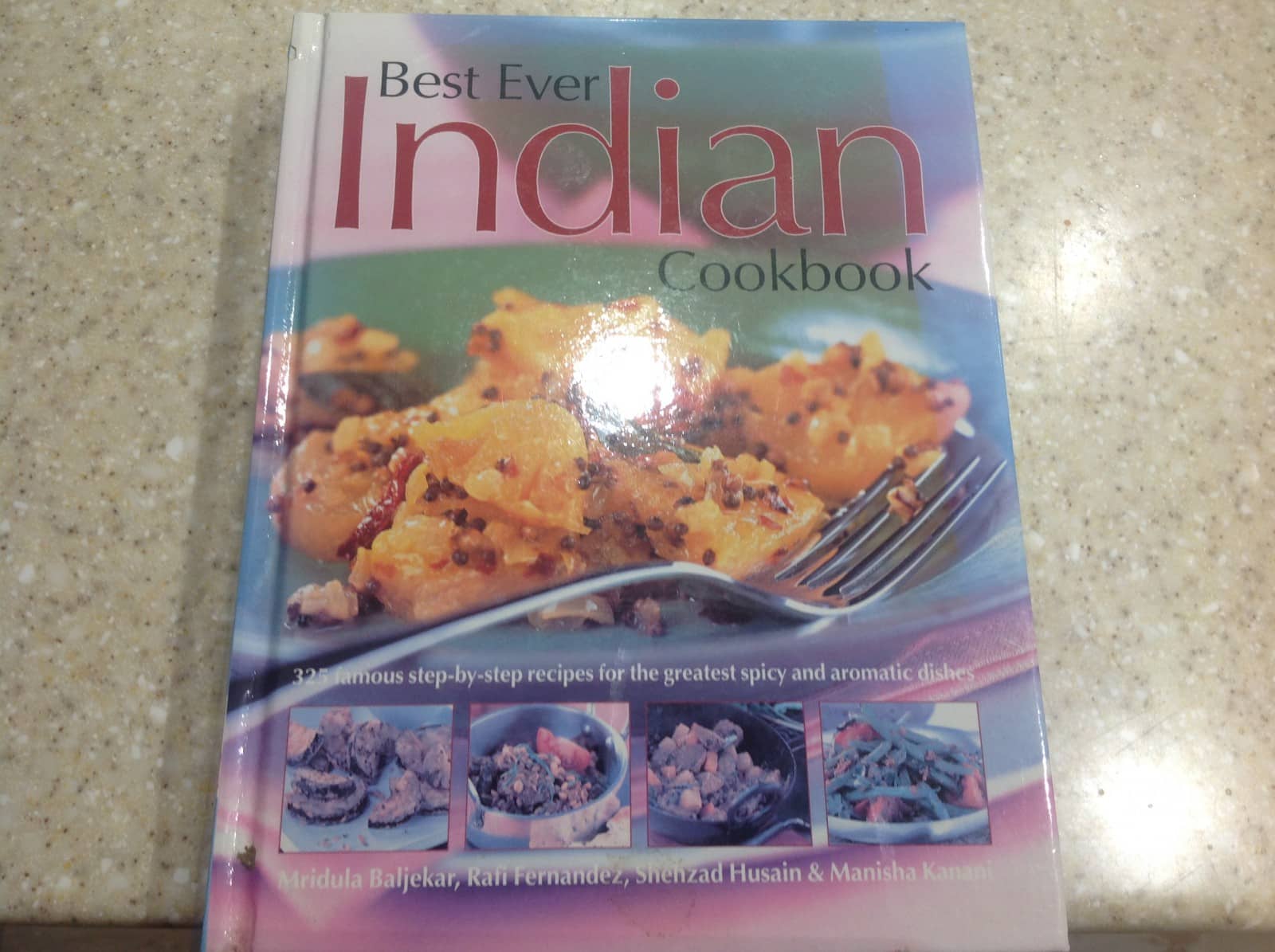 Had a little play in the kitchen today. I have a great many cook books and I’m always looking through them. Sometimes, as I did last night, I’ll take one down from the book shelf and go through from cover to cover, making a note as I go of any recipe I fancy the look of.

I’ve had this book of Indian recipes for a long time. The cover is faded and there is a price handwritten in pencil inside, so I probably got it from a charity shop. Or maybe even from the secondhand bookshop in Heathfield, before we lost it. 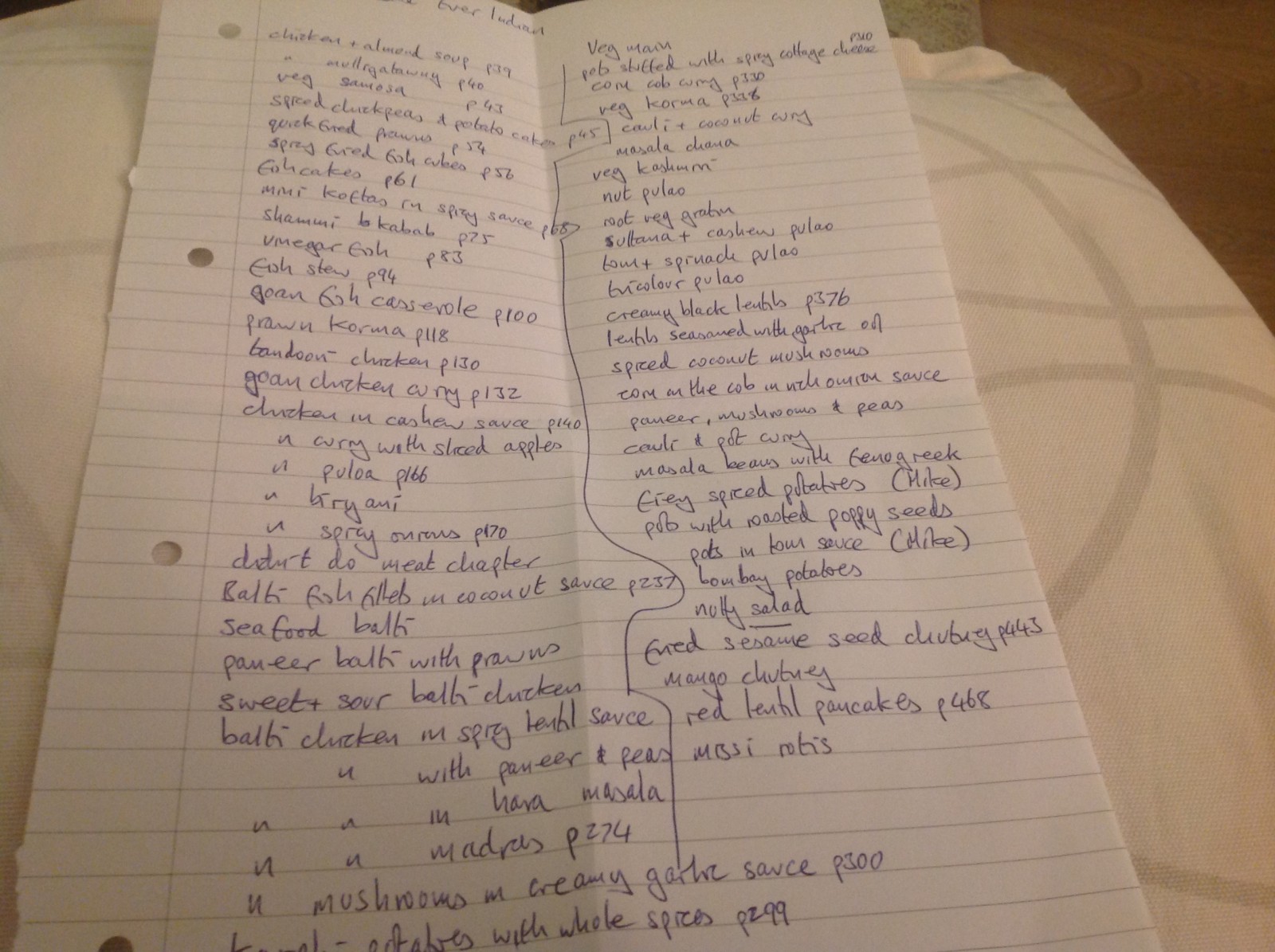 I have a very long list of ideas now to try from this book. Sometimes recipes I find end up being used as inspiration, rather than slavishly followed. Mike really loves Indian food and I fancied having a go at a spicy hot potato dish for him. He likes things much hotter than me, plus I’m not eating bread or potatoes at the moment, so this would be a nice treat for him. I planned to make it for him, with a bit of chicken, for his dinner this evening.

It wasn’t at all bad

He had bought a big bag of dried chillies from the Asian shop last time he was in Tunbridge Wells, so I used one of those. I didn’t have any fennel seeds, so I missed those out, and the coriander and cumin I have are ground rather than seeds, so it was those that were used. And I used a lot more spice as I went along, and Mike tasted it, which is strange as usually he thinks I use too much! 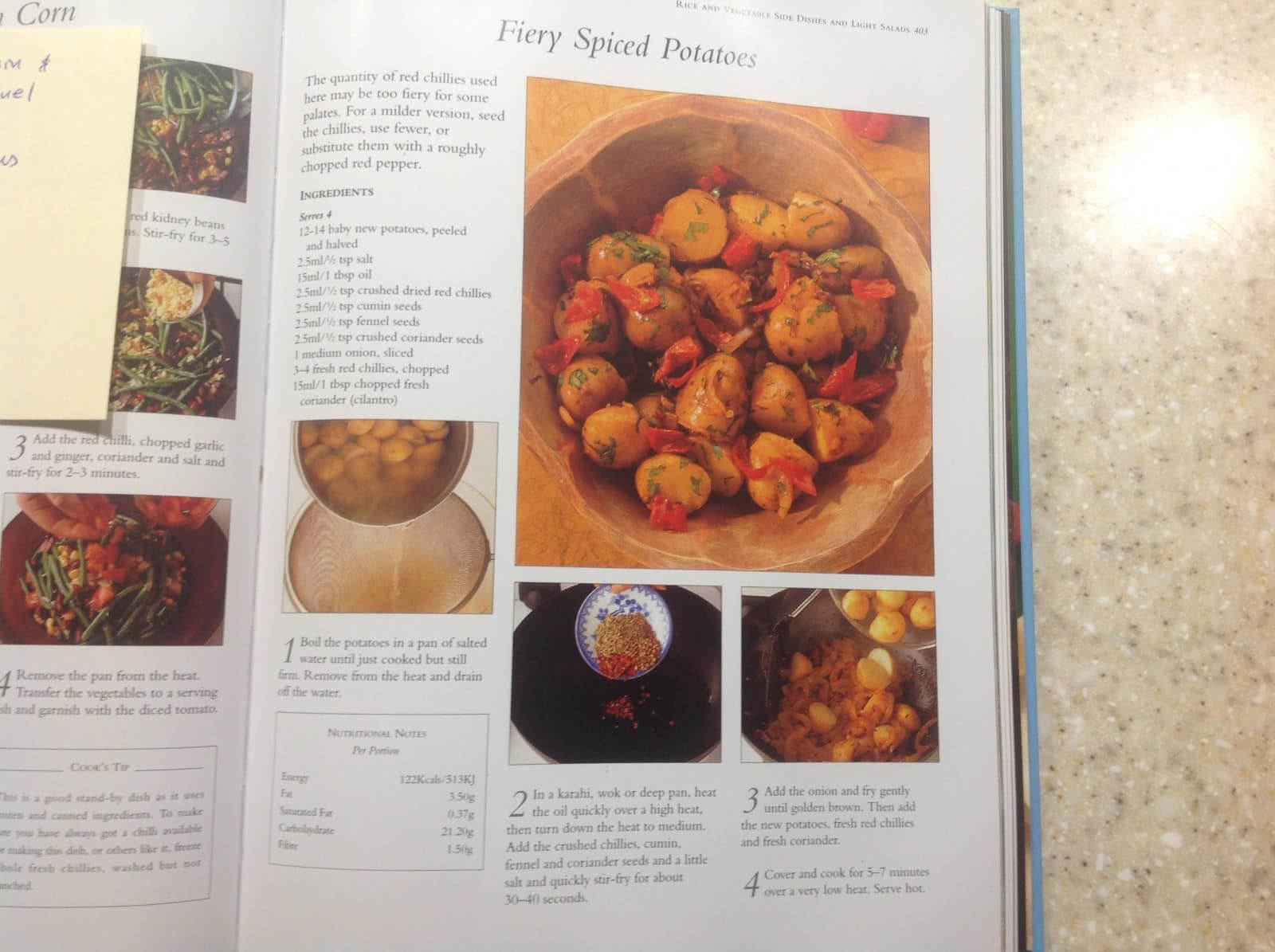 The recipe is to serve 4, but I’ve found in the past that reducing the spices proportionately in a dish doesn’t work and there won’t be enough flavour. If you want to use the original recipe, click on the picture and it will enlarge enough so you can read it.

This is what I used

All prices from Asda

Boil the potatoes in their skins. They don’t get waterlogged that way. When they are cooked and cooled, slip the skins off and chop into lumps.

Meanwhile, heat the oil in a suitable pan and sizzle the spices for a minute or two (not the garam masala). Careful, not too hot, or for too long, we don’t want them to catch when they would be bitter and nasty.

Now gently fry the onion until translucent. Now add the potatoes and stir it all around. When finished add the garam masala.

The dried chilli didn’t add any heat at all, hence adding a pinch of chopped dried chilli. When Mike tried eating the chilli itself, it was certainly hot, but too tough as it was dried. So next time, I think I’ll use tinned tomatoes and let the chilli infuse into the gravy.

You can of course share this between more people as part of an Indian meal; it would be lovely with a plain omelette; change the spices to whatever you have, experiment! Use a good tablespoon of curry powder instead of the individual spices, or a tablespoon of any curry spice paste. Adjust the heat using different amounts of chillies or chilli powder. Chillies differ enormously in heat, so if using fresh, taste a tiny bit to see how hot it is. Chilli powders also differ in their heat, so, as with fresh, taste a tiny bit.

I would love these using a little chilli and just Tandoori powder; or sesame seeds and amchur, which gives a fruity and sour note (amchur is dried green mango); or turmeric, paprika and garam masala.

Mike was far too impatient to wait until dinner and ate the potatoes, just on their own, for lunch. Still, he liked them, which is good, something to put on the ‘repeats’ list. Best laid plans and all that!