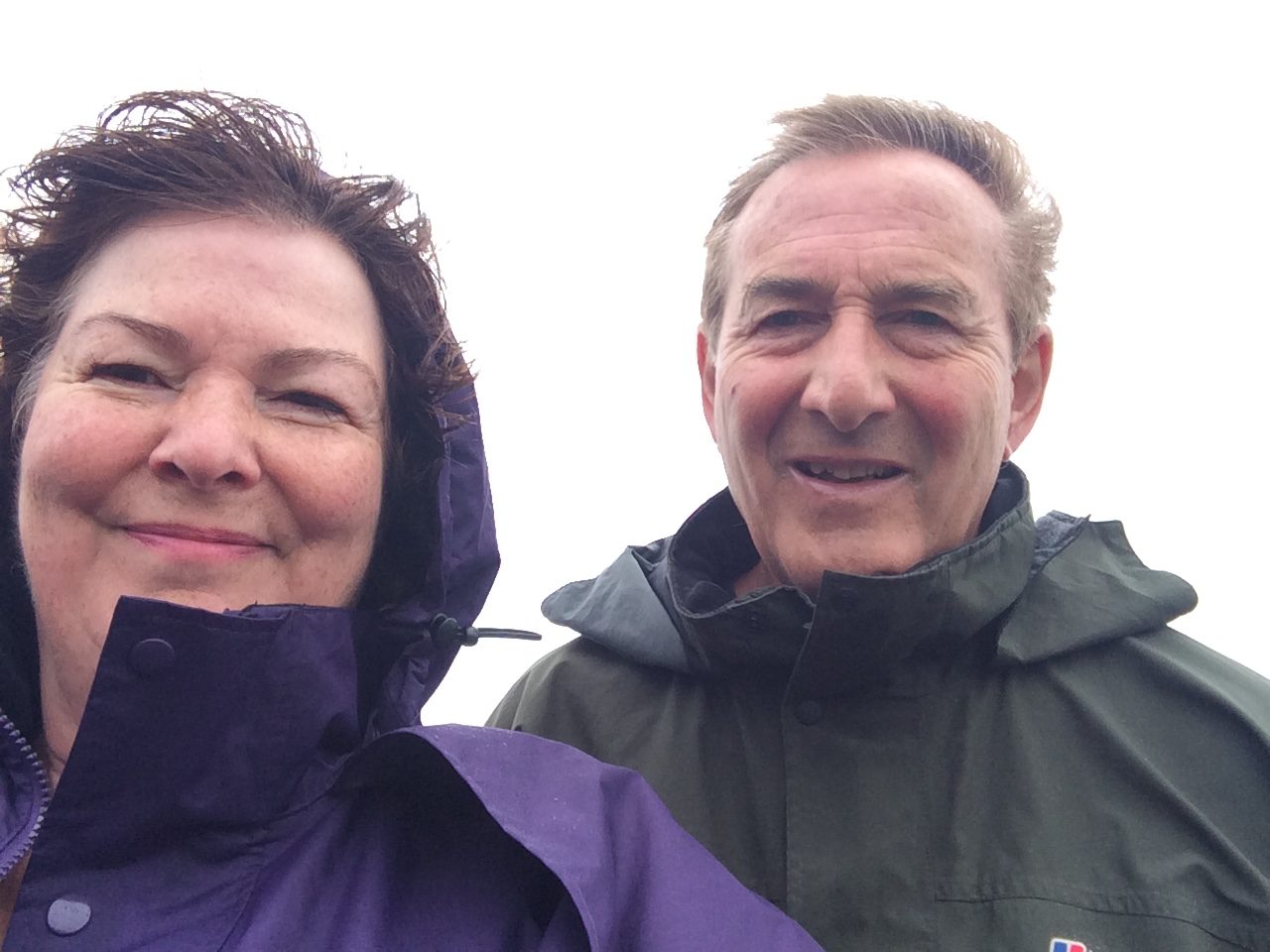 Don’t know if you could tell from my somewhat enigmatic Facebook posts over the last few days, but we’ve been away.

It was my birthday and when Mike asked what I wanted, I light heartedly said – a weekend away! Well he only went and organised one didn’t he, first time in nearly 40 years! He had an iPad for his birthday last year and it has made a big difference to his habits. He peruses Amazon for books he wants, and other sites for other purchases and looks up loads of things when working out how to do a project. For this surprise, he looked on Trivago and found lots of nice places to stay. There might be more surprises in the offing 😊

So off we went to a hotel in Worthing. It was cold on Monday and when we walked along the front by the sea, there were hardly any people about and it was blowing half a gale. Blimey, the English summer eh! Still, like the rain accustomed English people we are, we still had a good time.

The hotel wasn’t quite as posh as we thought it was going to be, but it was fine and we enjoyed it.

When we went down to breakfast this morning, our host pointed out the hole that had been left when several square meters of lathe and plaster ceiling had fallen down earlier that morning. They had done a sterling job of clearing up the mess, but there was still lots of dust about. What a job! 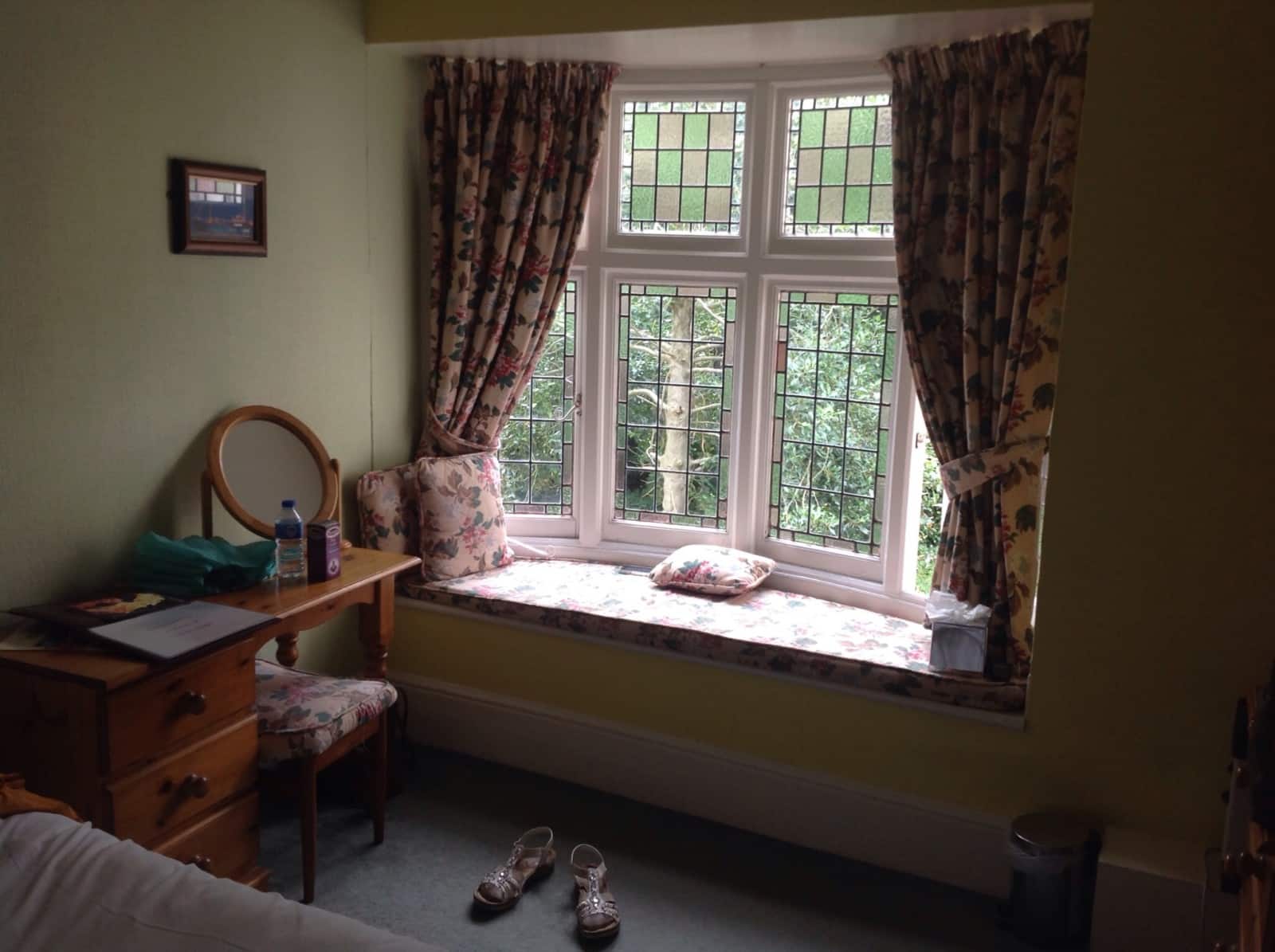 We found a really good Greek taverna, the Fat Greek Taverna, and enjoyed it so much we went back the next day too to try something else. I had moussaka the first time and shared a pudding. I can’t have caffeine, so have to have decaf coffee when I’m out and about. This is rather a hit and miss affair. It can be really good, indifferent or truly foul. There is one local pub, I won’t name it, where I literally can’t drink it at all. The decaf at the Fat Greek was delicious, so a lovely treat to finish off a lovely lunch. 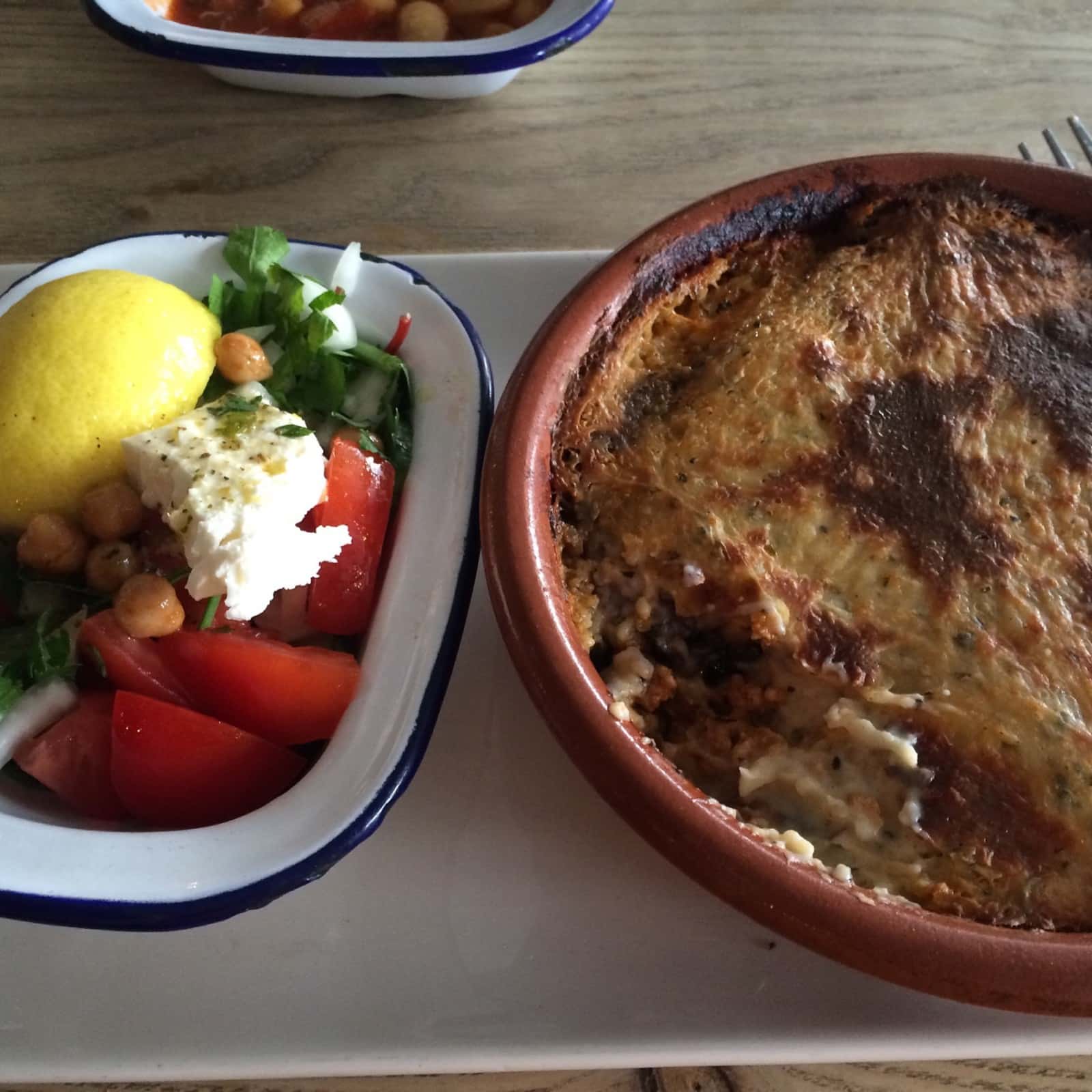 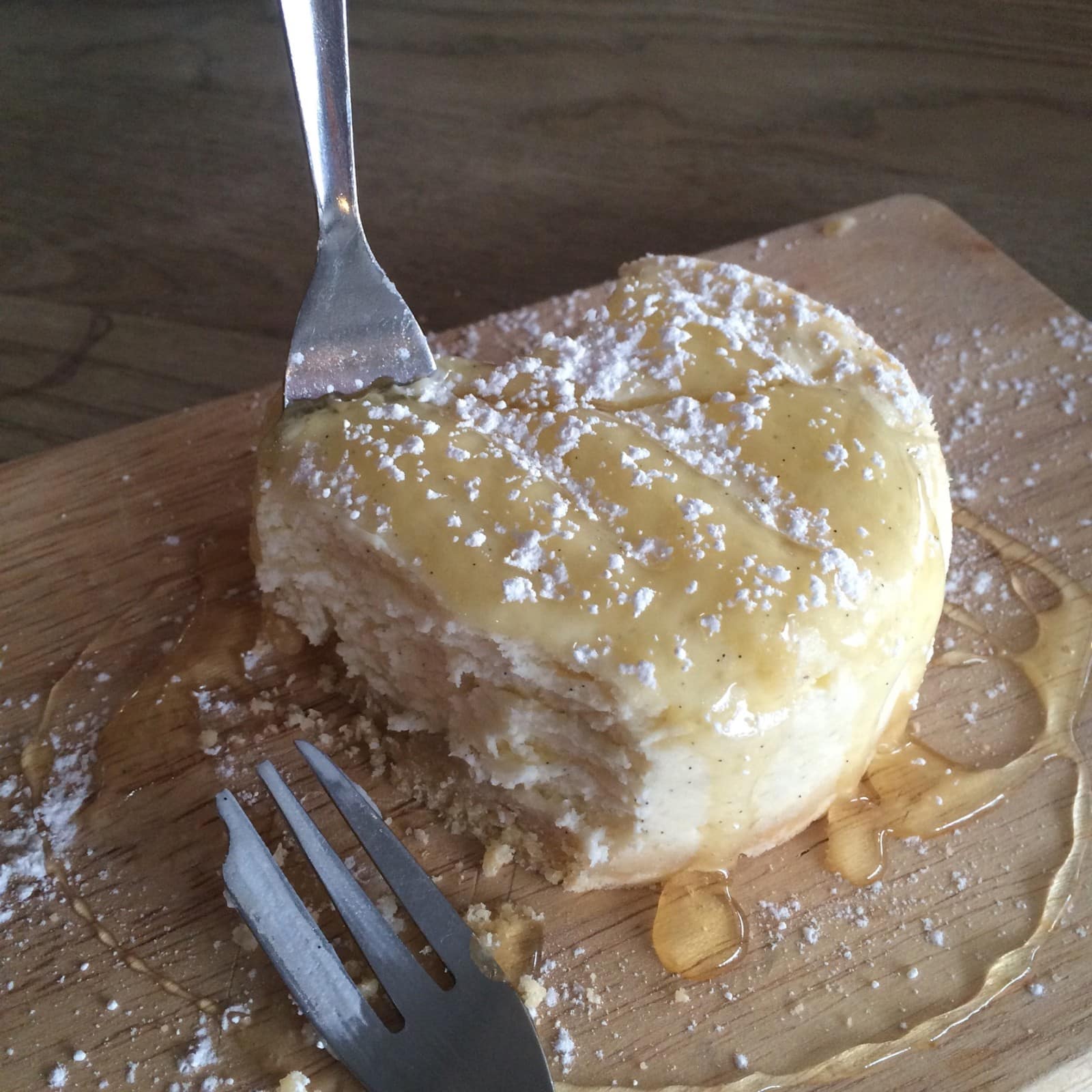 The second day we both had an enormous pizza. I could barely walk afterwards I was so full. I know I’d had 750ml sparkling as well ( I deliberately have a lot of water when eating out, takes up space as it were) but even so! 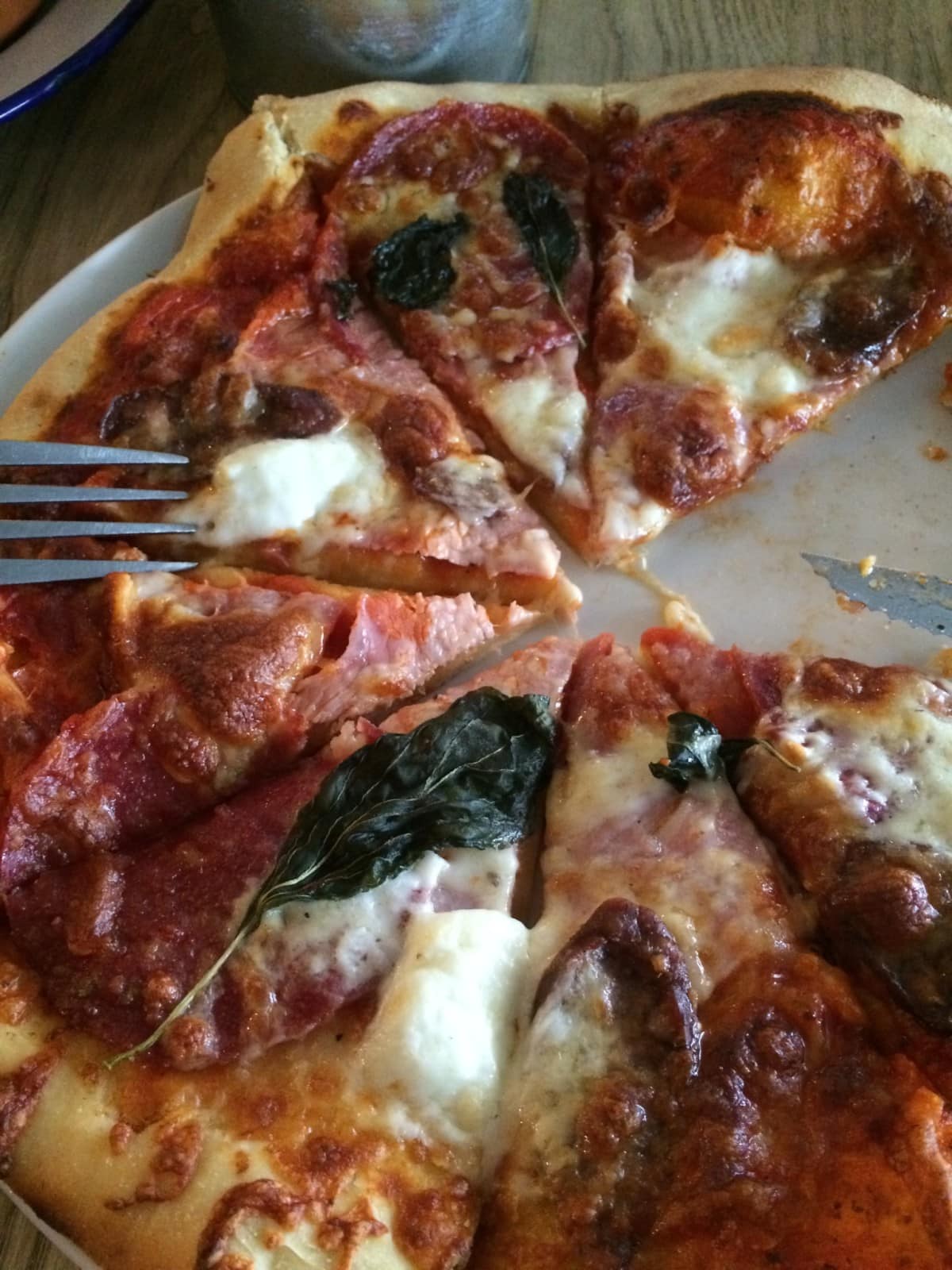 One of the things we did whilst the weather was not so good was dive into a Waterstones when we spotted it. We still had £60 left in vouchers from our annual payout from Amex. We had walked and walked that day and as I knew we were going to do a lot of walking, I didn’t want to carry a handbag and had left it in the car. So after choosing our books, we had to walk back to the hotel to collect the vouchers, then back to Waterstones to pay for and collect the books, then back to the hotel again. We ended up doing 18,000 steps that day. Phew! 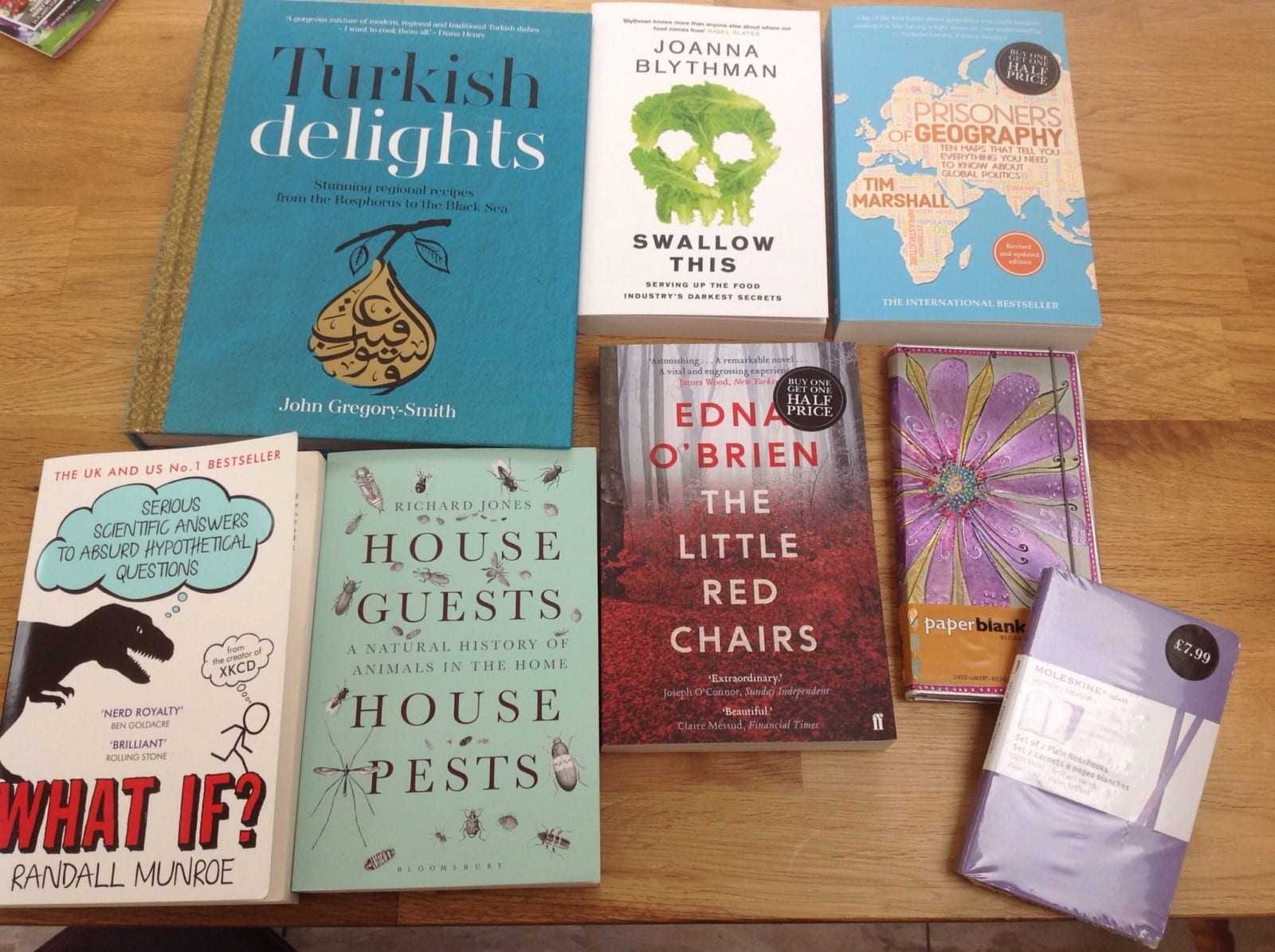 Yes, I bought another cook book, like I need another one. Some light science books, a novel, and some pretty note books. I love stationery. In fact, along with books, stationery was my best present as a child. I often received a play post office with lots of envelopes, writing pages with a cartoon or fictional character on them, a stamp to stamp the envelopes with and a holder to put it all in. I happily stamped the envelopes and played post mistress for ages.

Worthing has an interesting museum. I was interested in the 19th century costumes, as well as the 20th century ones. The older dresses were tiny, with teeny tiny waists. My 8 year old grand daughter wouldn’t have fitted into some of them! I was gazing at them and imagining the discomfort of tight corsets and of being strapped into the dresses. I also laughed over a description  of using the loo in one of those dresses with panniers on either side. The display included an item that looked like a giant gravy boat which was apparently used by ladies to go to the loo whilst at court. They had to ask permission and sometimes it wasn’t given until too late, whereupon the lady ‘would step delicately away from her own puddle’.  Can you imagine the smell, and gravy boat or not, the clothes must have got splattered as well. Pass me the clothes peg! 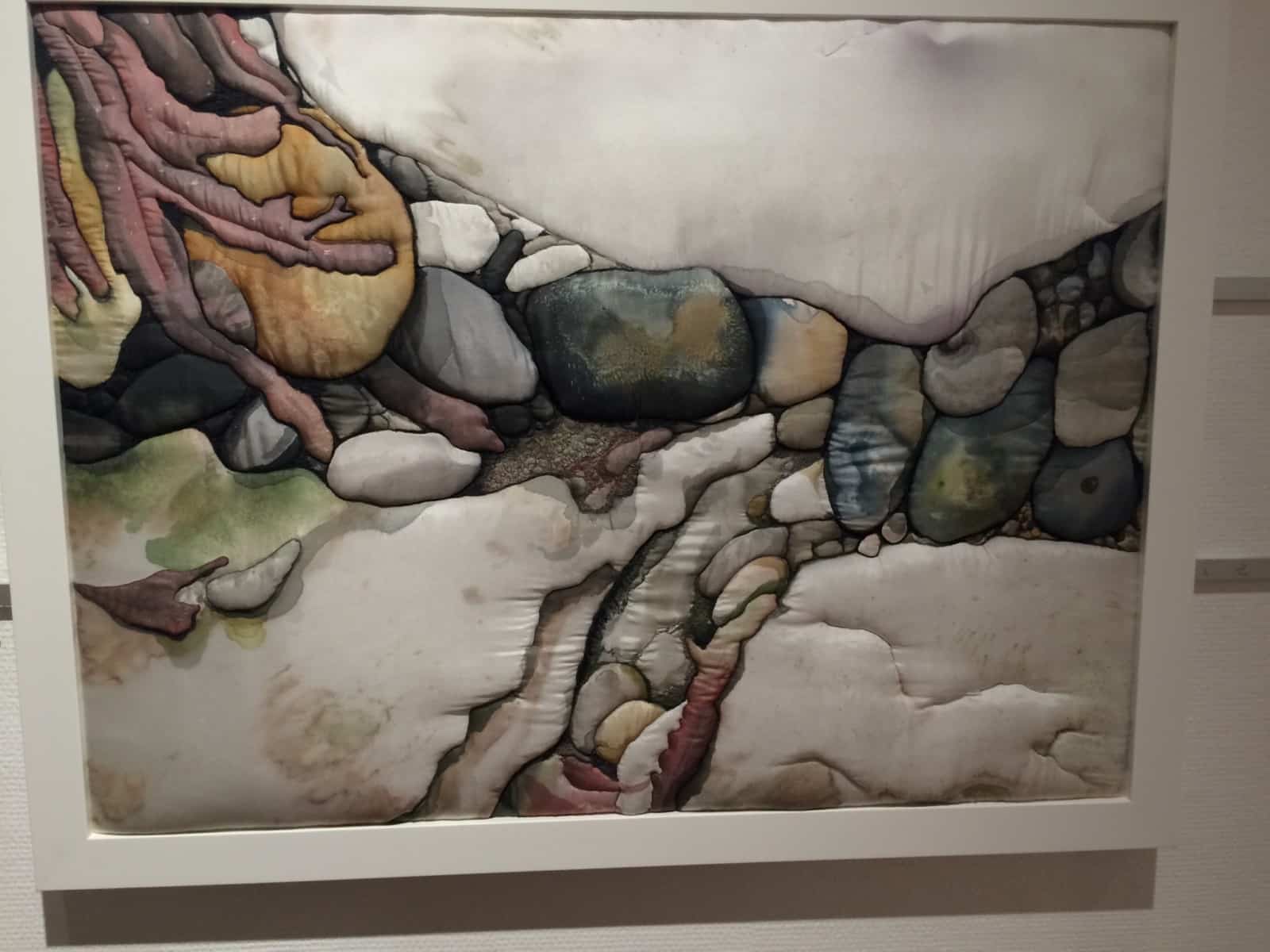 There was a series of pictures like this one. It is painted on silk and is padded so that it is 3D and sticks out from the frame quite a way. They were quite beautiful. I wanted to touch them, and could have done as they weren’t protected in any way, but refrained.

There were lots of other things too to look at, too many to go into here. If you are ever in the vicinity, do go and have a look. It’s free!

On the way back we stopped at Beachy Head with the intention of having a walk, but it was fog bound and we couldn’t see a thing. So we ended up just hanging out in the pub, having a bit of lunch and then going home.

I am quite tired as we had a double bed at the hotel, but they are always a lot smaller than our enormous one, so we felt squashed. And we have a memory foam mattress on a wood base at home, so there is no boing factor when one of us turns over or gets up in the night, whereas everywhere else there is a lot of boing and neither of us gets much sleep. I might, reluctantly, have to go to singles when we’re away.

Back on the diet tomorrow, and back to the gym too. I’ve been doing lots and lots of steps. But it isn’t the same is it. It’s going to be hard!