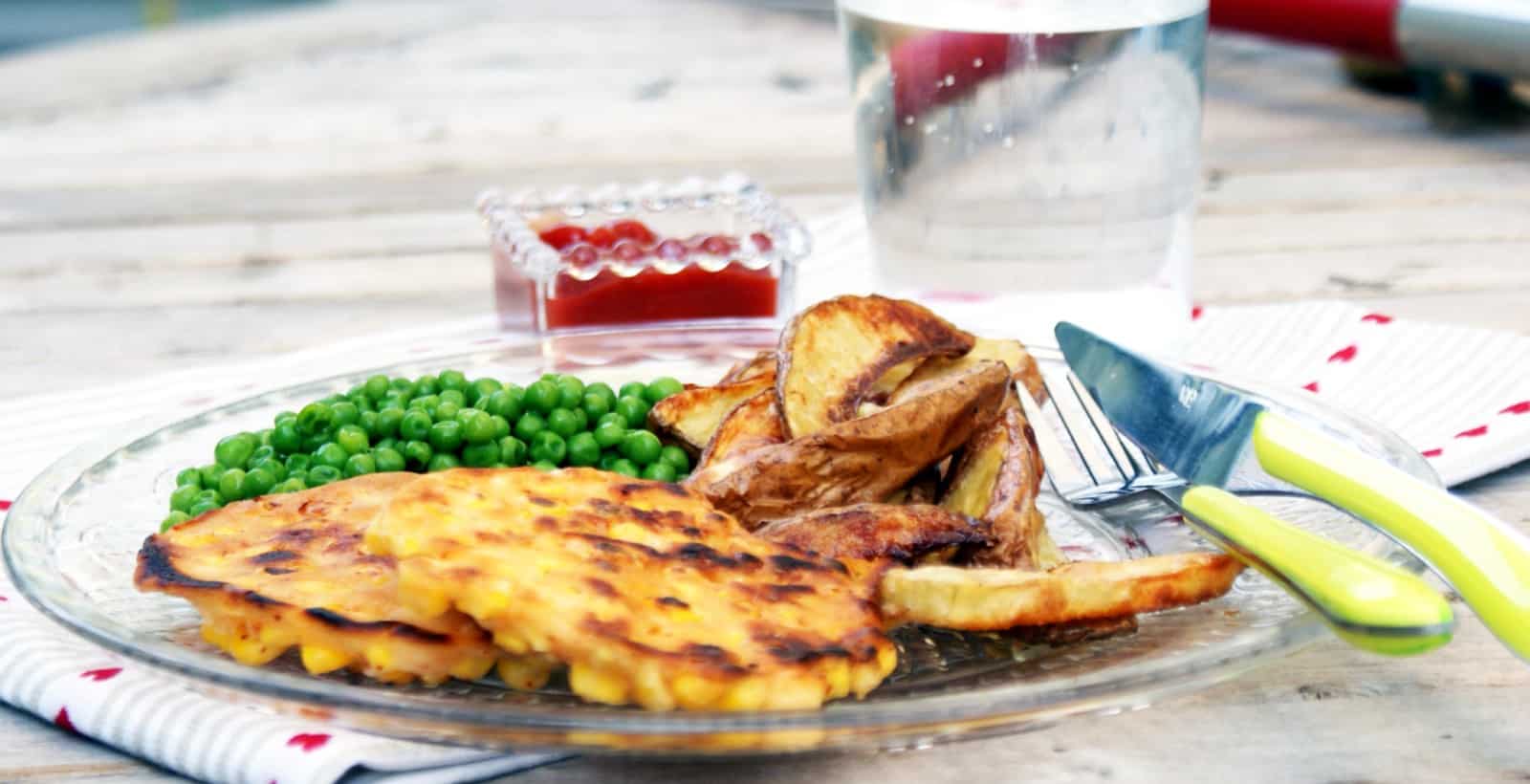 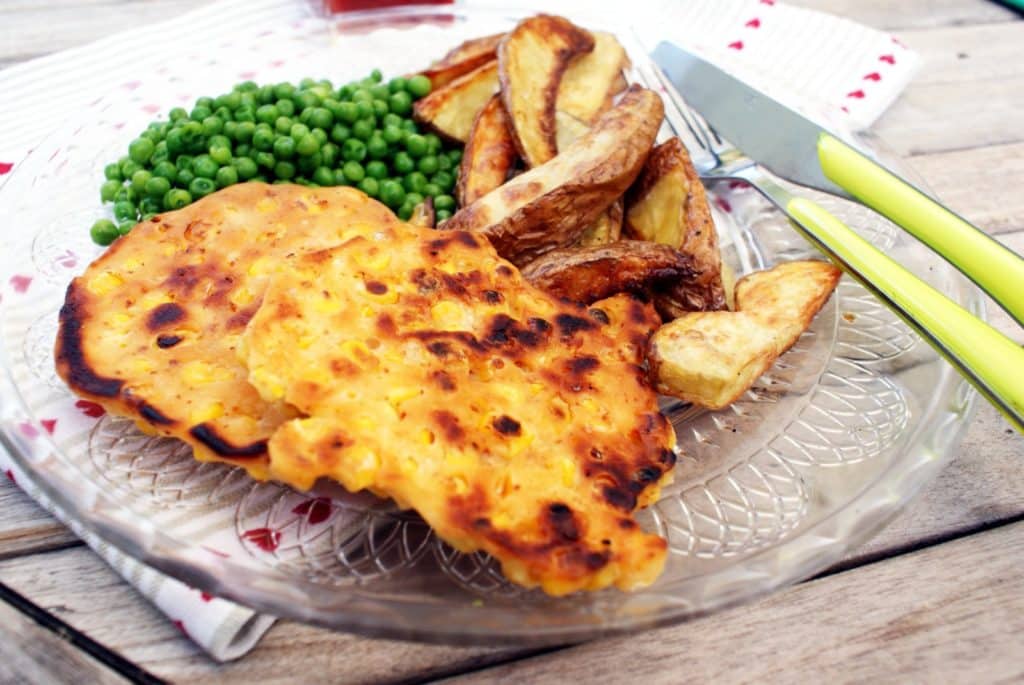 Sweet corn appears to have originated in America, being grown by Native Americans, now enjoyed worldwide in various forms

Sweet corn occurs as a spontaneous mutation in field corn and was grown by several Native American tribes. The Iroquois gave the first recorded sweet corn (called ‘Papoon’) to European settlers in 1779.[3] It soon became a popular food in the southern and central regions of the United States.

Corn be enjoyed on the cob, my daughters absolutely loved this when we grew it in the garden; after it has been dried and made into popcorn; or shucked from the cob and frozen or canned.

How to make Sweetcorn fritters and wedges

If you are following meal plan 1, this is what you need to do. If you are not following the plan, feel free to go off piste!

First of all get the oven wedges on. Scrub the potatoes and cut them into wedges, no need to peel.  Toss them with some oil, salt and pepper. Put them in a medium oven and roast for about half an hour until golden. You could microwave them until semi cooked to cut this time down, and give them a good shake to rough up the edges a bit to get crispier wedges

Tip the defrosted or drained tinned sweetcorn into a bowl and add the flour and seasonings. Add enough water to make a stiff batter, you won’t need much.

Heat the oil in a frying pan and drop spoonfuls of corny batter into the pan. Two fritters each is the right size. Cook until set and golden on one side, flip over and cook the other side.

Make sure they are cooked until they are crispy, so much nicer that way.

This meal is used in Meal Plan 1

This post describes my experimenting with making fritters using a tin of mushy peas. Super cheap, and I found lots of different ways to flavour them 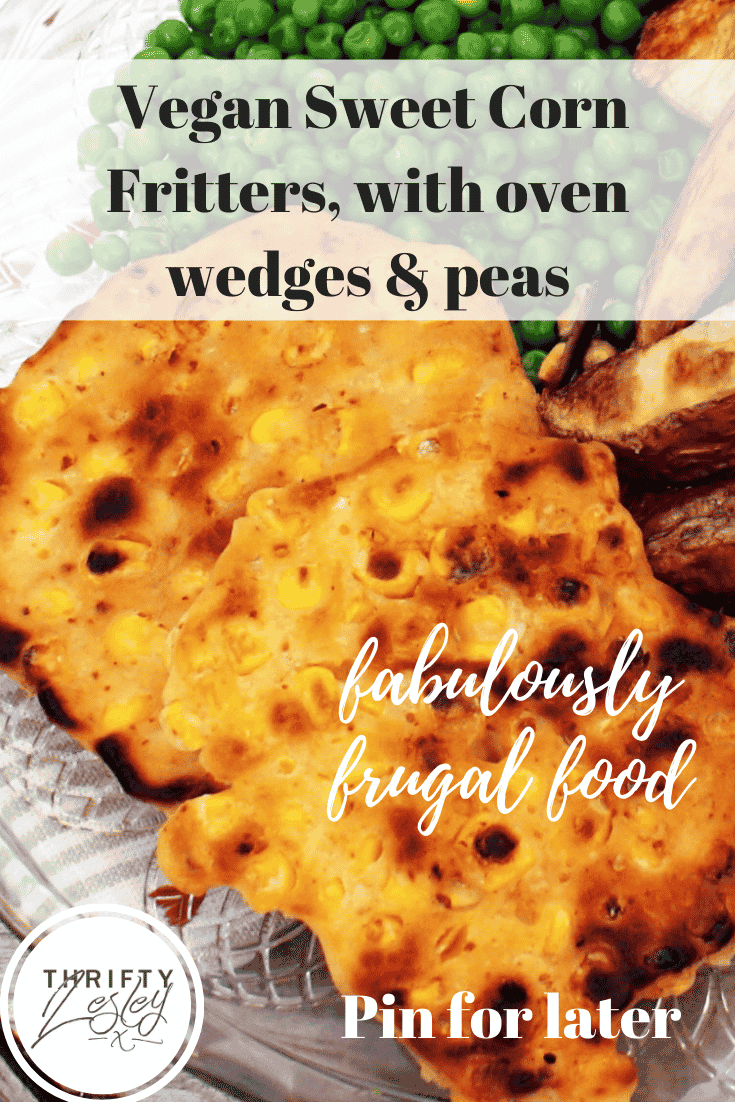 5 from 1 vote
Simple little fritters, very quick and easy
Click here to add your own private notes on this device.
Add to Collection Go to Collections Rate this Recipe/Comment Share on Twitter Share on Facebook Share by Email Pin Recipe Print Recipe
Prevent your screen from going dark
Prep Time: 10 mins
Cook Time: 30 mins
Total Time: 40 mins
Course:
Dinner
,
Lunch
Cuisine:
American
Vegan
,
Vegetarian
Servings: 2
Cost per portion 30p
Calories: 615kcal
Author: Thrifty Lesley
Click on the check box to cross off Equipment, Ingredients or Recipe Steps completed.
If you click and buy anything, I may get a small commission on the purchase. It won't cost you anything extra. Some are just things that I like and/or use myself rather than necessarily best value 🙂
If you enjoyed this recipe, would you please consider leaving a review? It would really help