Lentil flour and the simplest bread I’ve ever made

Lentil flour and the simplest bread I’ve ever made 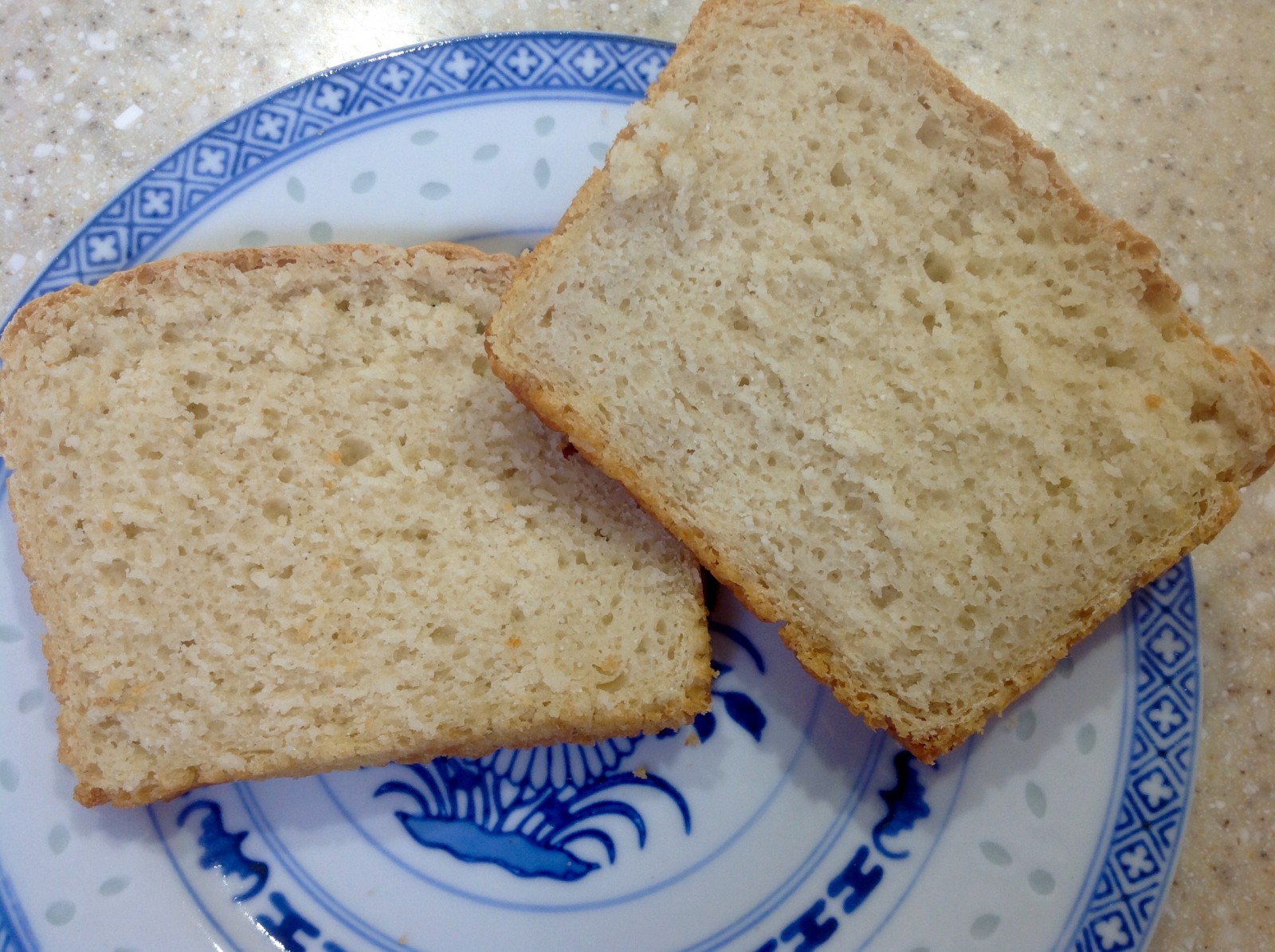 I was looking round the Internet last week, as you do, and came across lentil flour. What’s that, thought I, sounds intriguing. I started off with lentil flour and ended up with a loaf made with fizzy water! What I hear you say? That’s what I thought too.

Turns out you can buy lentil flour from Amazon, at relatively great expense – about £6.50 a kilo.  But the thing that had caught my eye was a post by Kacey at cookiewriter.com on home made lentil flour.

Kacey used her flour to make a beer and Parmesan bread, amongst other things. I wanted to try this! And to see if I could frugalise it.

So first up was to make some lentil flour. I tipped some red lentils in the food processor and ran it for a while. It made quite a racket and took ages. I ended up timing it for 10 minutes, and then did the same in the liquidiser, to see if there was any difference.

After sieving the debris left to remove the flour, I was left with red lentil nubs. I think you can see from the picture that the liquidiser version, on the right, created a much finer version than the food processor version, on the left. I don’t seem to have taken any pictures of the lentil flour itself! Doh!

After leaving the liquidiser running for ten minutes, moisture was generated from somewhere and the resulting flour was welding itself to the inside of the glass. So ten minutes at a time is the max. I haven’t yet tried leaving the machine to cool down, sieving the flour out, putting it back in the machine and having another go. 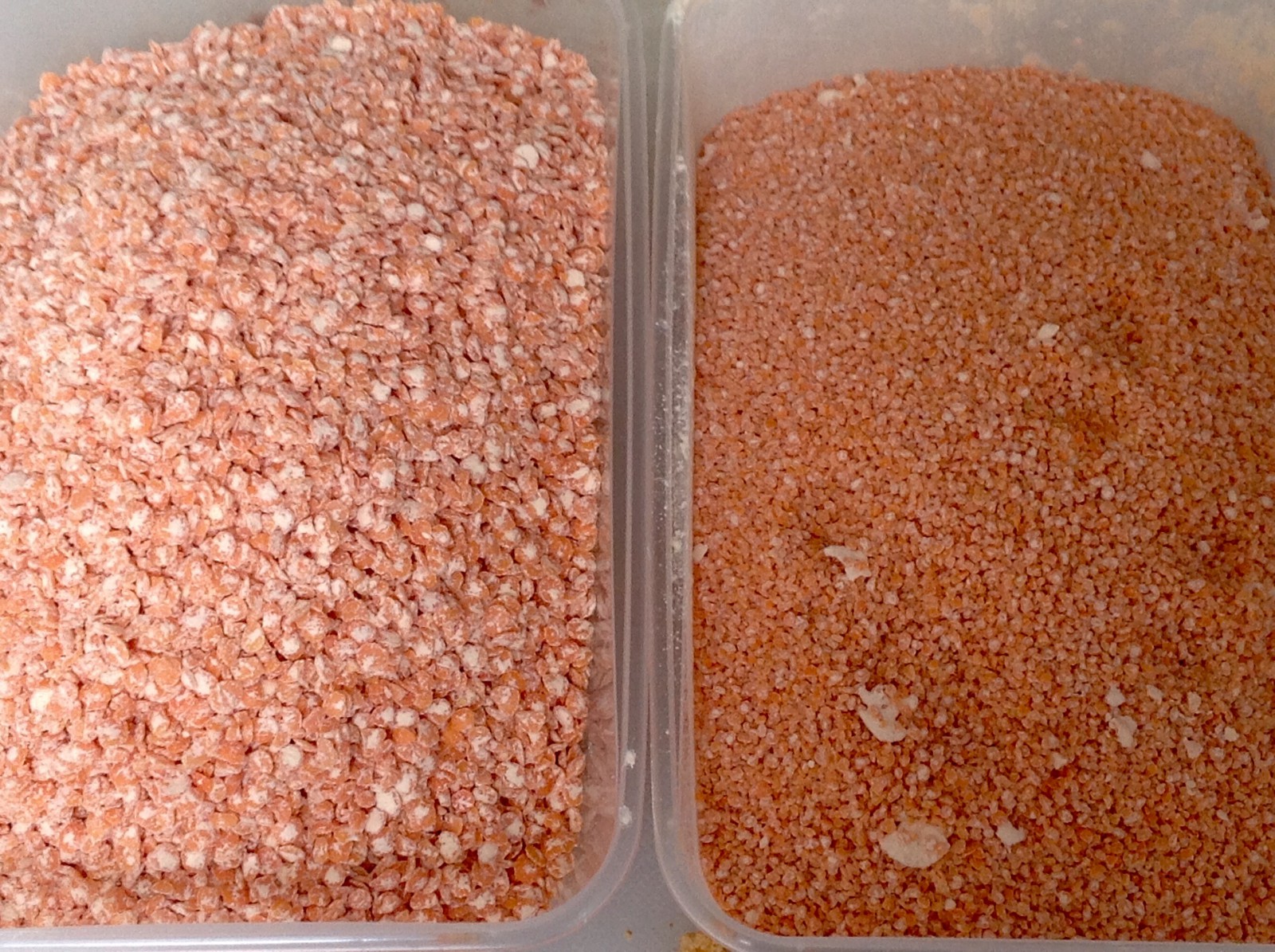 Next step was making some beer bread.

Sieve the flours, baking powder and salt together. Make sure they are well mixed together. Mix in the cheese.

Grease a 2lb loaf tin thoroughly. I poured in a tbslp of veg oil and used a silicone pastry brush to push it into every corner.

Add the beer to the flour mix and mix just enough to incorporate, like a muffin. The beef will fizz enthusiastically. Tip the mix into the prepared tin and leave on one side for half an hour. Don’t nudge or knock the tin in this time, it will rise a bit. 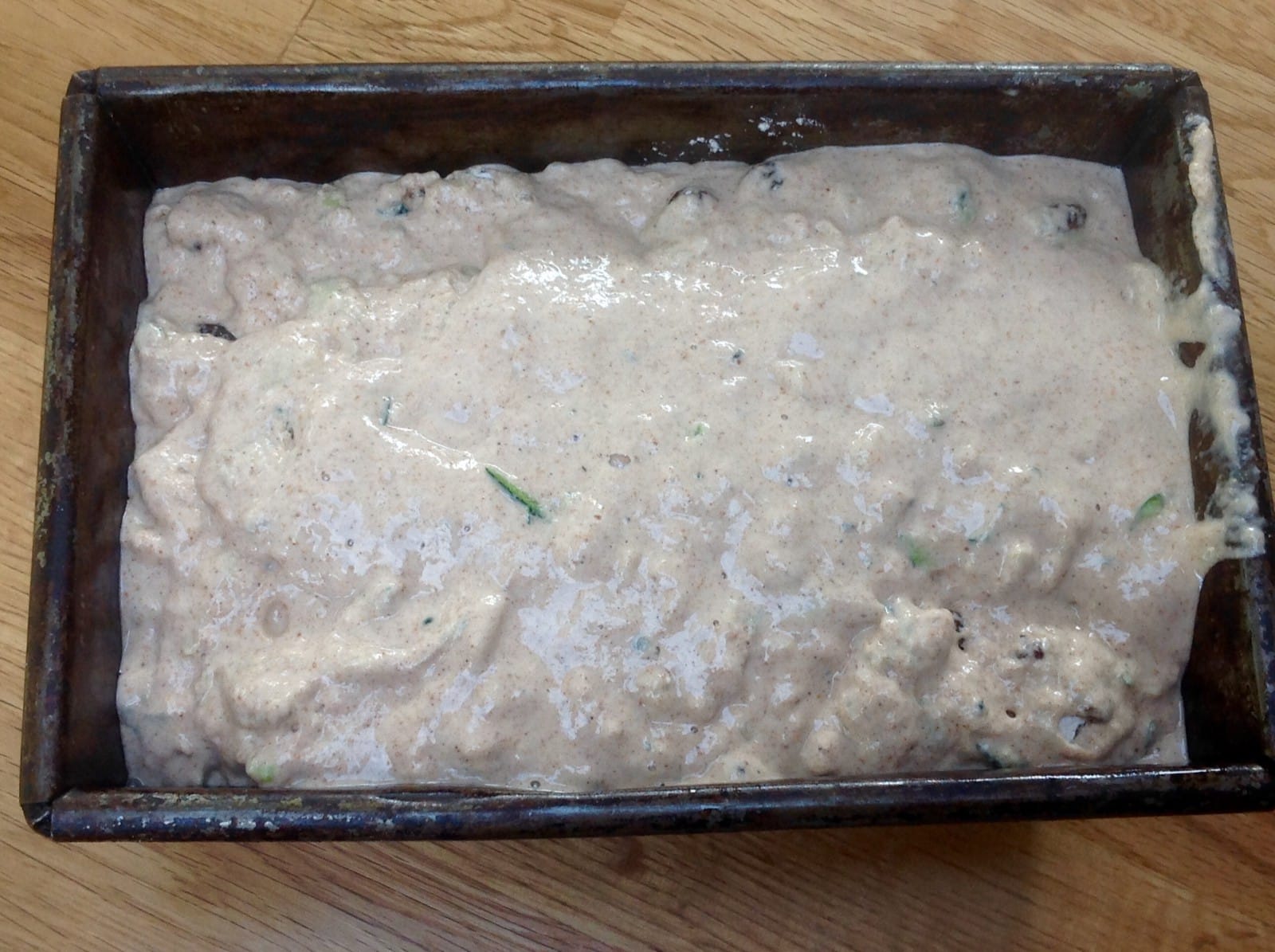 You can see I think that it rises a little. This is the version I talk about later on, with courgette in it, that’s the green flecks. 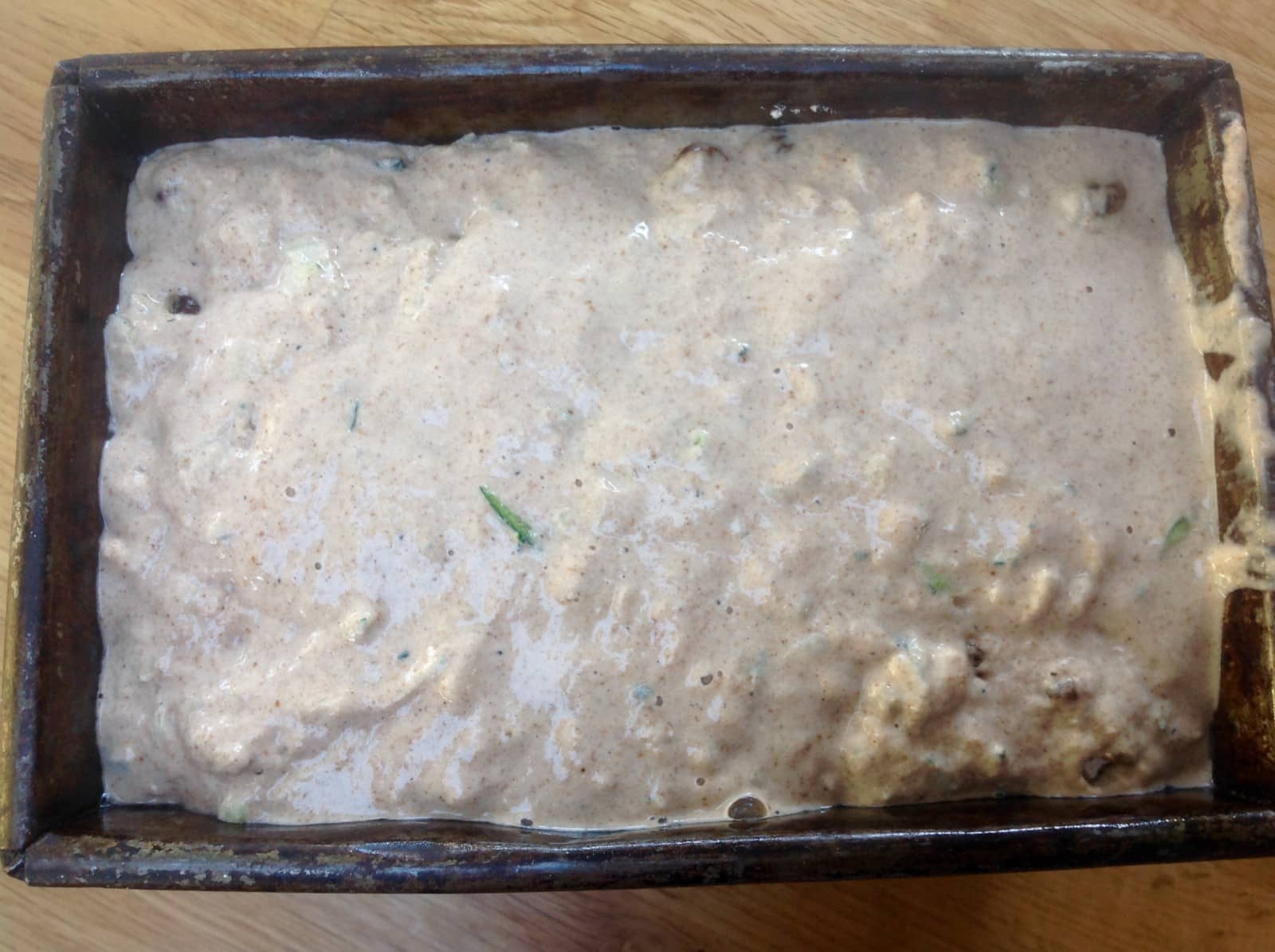 When the half hour is up, put the bread in the oven and bake for half an hour. Leave in the tin for a few minutes to firm up, then cool on a wire rack.

Leave until completely cold, then slice. Freeze any not eaten on the same day to keep it fresh.

The loaf had a beautiful crumb, sliced well and tasted wonderful. So a good result from step one.

Next step in the frugalisation process was to try one without the cheese. Result? A delicious loaf. Slightly bitter from the beer, but tasting great with butter and jam.

I was hoping that the complete loaf would be a high protein bread, which would be great for my diet. Unfortunately for me, it works out the same as ordinary flour 😒 . I felt surprised and somewhat deflated by that. It does seem to have very good satiety however. One small slice lasting me for ages before I get hungry again. Must be the extreme lowness of the GI value of the lentils. So for that reason, it’s something I would do again. A slice of this toasted and a couple of scrambled eggs for breakfast. Delicious.

So for our purposes here, that would be the purpose of a lentil flour loaf. Satiety at a rock bottom cost.

This time, I stripped the recipe right back. I had been trying to find out if something in the beer was necessary for the great crumb and couldn’t really find anything. So I went for it and made a loaf using just value self raising flour, baking powder, salt and the cheapest sparkling water I could find.

Verdict? The best so far! Super simple method, cheapest of cheap ingredients giving an utterly delicious loaf. Crusty when it came out of the oven, although that didn’t last more than a few hours. 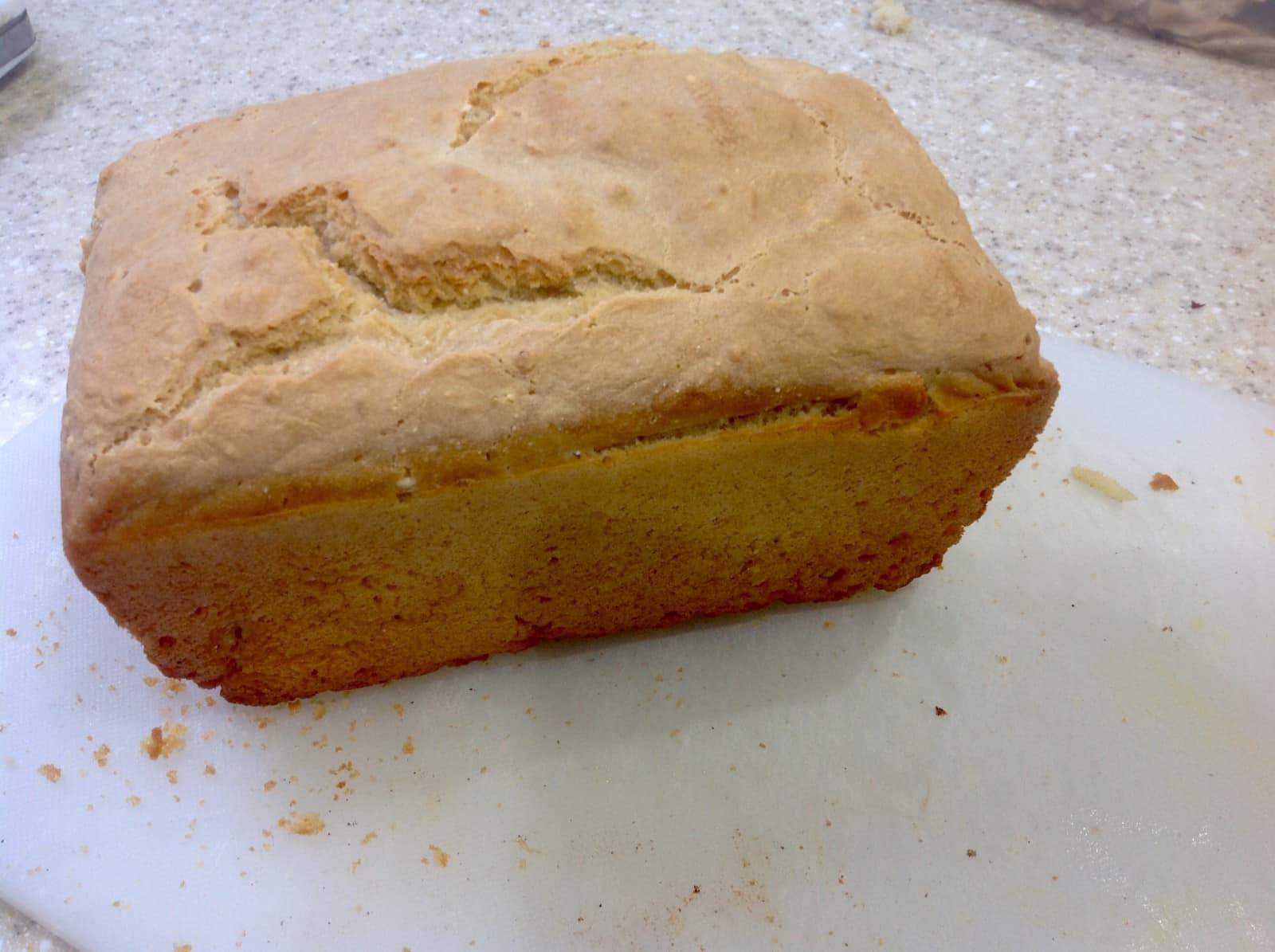 Just look at that crumb!

This time I used

Method as above, but the loaf needed twice as long to bake. So bake for an hour. I was inspecting it after 40 minutes, and ended up taking it out of the tin and baking it for the rest of the time untinned. That’s what gave the great crust I think.

I have also tried making one with a grated courgette, a big handful of raisins and a couple of good spoons of mixed spice. This loaf took twice as long again to cook! So two hours! Probably all that moisture from the courgette, even tho I cut the water down from 450ml to 400ml. The resultant loaf was moist and luscious.

I’ve had various versions on the worktop, just covered in a tea towel, and they have lasted well, not staling faster than any other bread. Because they are moist bread, they take a while to toast, getting there after 3 minutes in the toaster

There is much to explore yet with this discovery. The obvious possibility is trying a gluten free version. The original recipe uses lentil flour and coconut flour, so would be gluten free, if you used gluten free beer.

Kacey made her coconut flour using dessicated coconut and in an aside, says not to process it too much as you would end up with coconut butter. I think that sounds totally gorgeous and would be lush on toast with maybe a spoon of sharp raspberry jam on the side. Another thing to try 😋

There are all the different flours to try. I haven’t even approached it using proper strong gluten bread flour yet, or any of the granary or chapatti flour I have so much of. Edit: here is a chapatti flour version

I am longing to try a tinned tomato and sautéd onion flavour; miso and Spring onion; sun dried tomato and dried fried onion; chorizo; sautéd mushroom and cheese. Then there are the sweet ones; sharp dried cranberries with sweet raisins; dark chocolate and, oh, lots of different things, those lovely dark dark cherries you can get in the freezer section, spread a slice of that with clotted cream (cheap Christmas leftovers in the freezer) and maybe a bit of jam, and you have a Black Forest variety in the palm of your hand ; or grated lemon or orange zest; or a complete chocolate one using cocoa powder etc. etc. etc.

Lots and lots of ideas to try

I tried the first mix of half lentil flour and half ordinary self raising flour as breakfast pancakes. And they were really really good, and lasted right through to lunch. I had a little sweet chilli sauce on them. Yum! 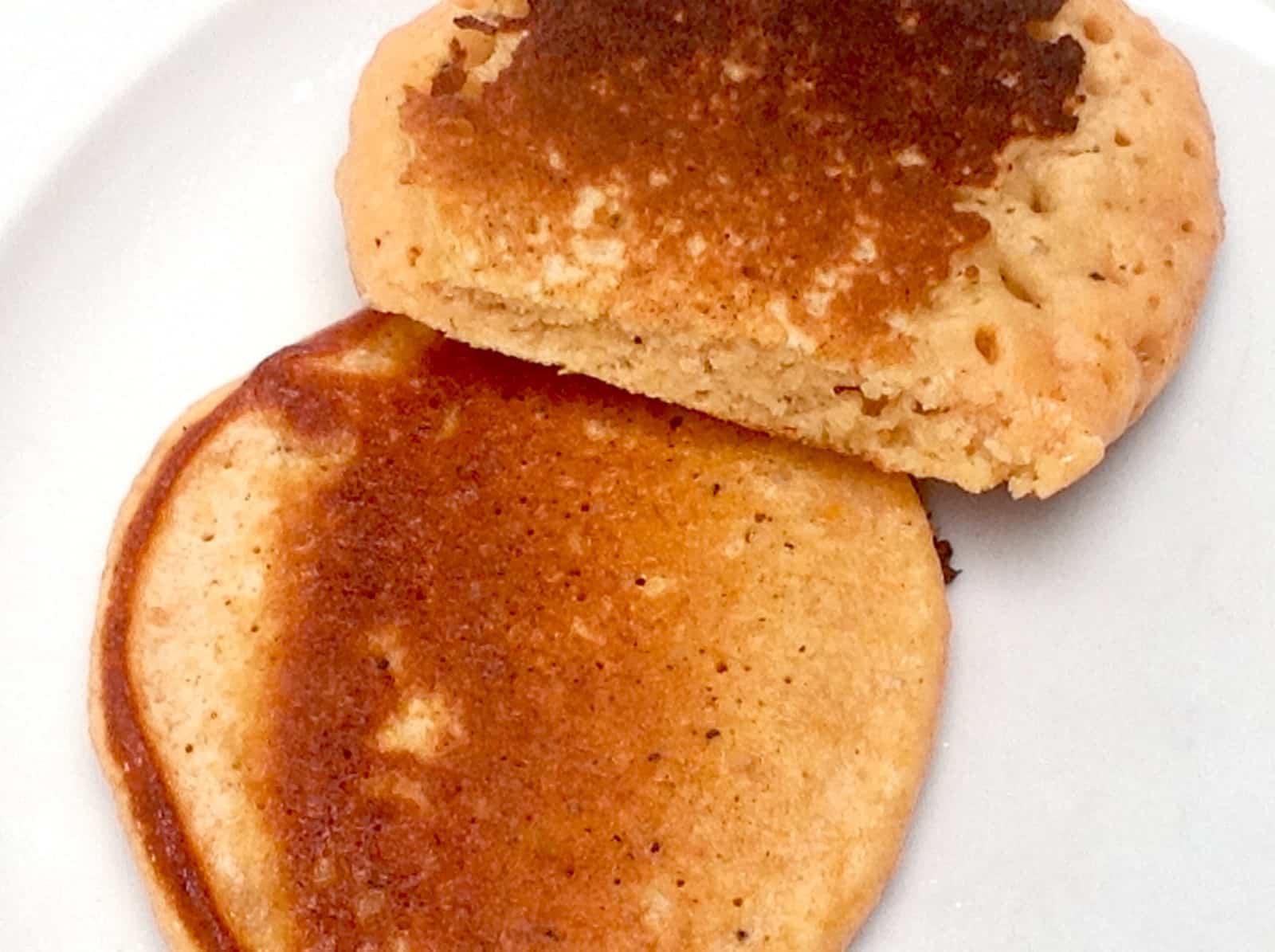 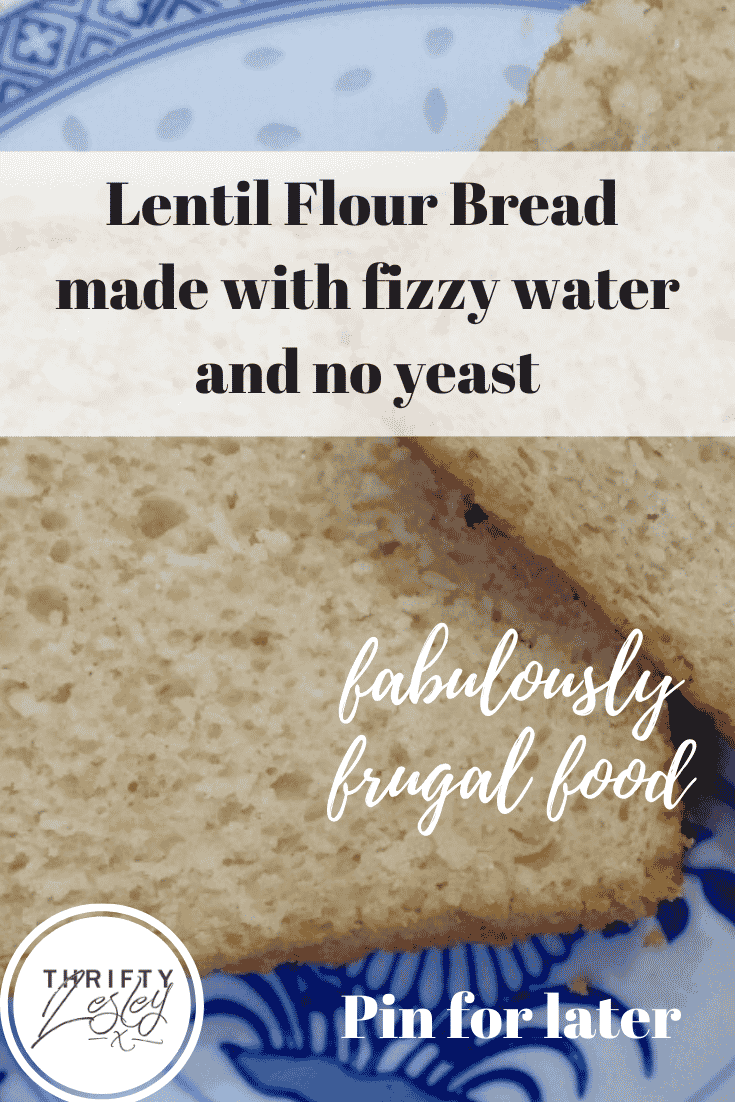