Home made Nutella. Improved nutrition for the same price!

Home made Nutella. Improved nutrition for the same price! 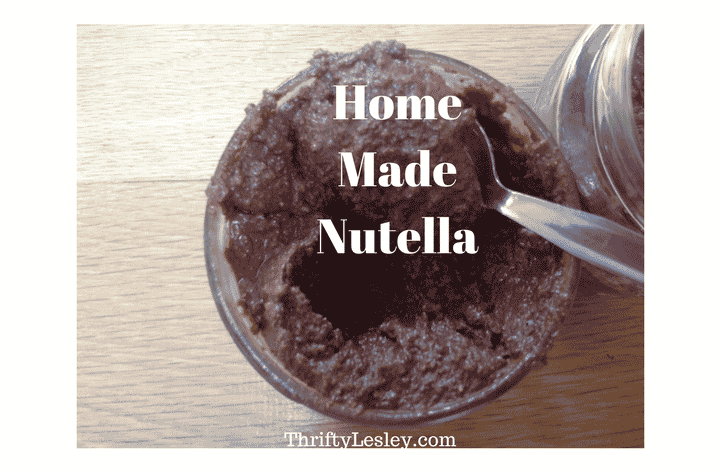 Do you like Nutella? It’s gorgeous stuff, kids can be addicted to it, it seems to go with everything and can be eaten straight out of the jar with a spoon. And probably often is!

But… and there’s always a but isn’t there, the nutritional content is pretty poor. Palm oil constitutes 25% of the total weight. Palm oil isn’t a great food to have often. Wiki says

According to the World Health Organization, evidence is convincing that consumption of palmitic acid increases risk of developing cardiovascular diseases, placing it in the same evidence category as trans fatty acid

A further whopping 50% of the jar is sugar, pure, simple, and also, not great in such proportions.

And it’s only the remaining 25% that is the hazelnuts, milk and cocoa that we tend to think of as the ingredients, conveniently forgetting the other 75%!

So, I’ve been pondering for a while now about trying a recipe to make some at home, with better nutrition. There are many many recipes out there for home made Nutella. Many use a bar of chocolate, but I didn’t want to do that, I wanted a little more control over the ingredients. One used condensed milk which I got quite excited about for a while, but decided against in the end.

I finally decided to have a go using similar ingredients to those shown on the graphic. I was going to change the palm oil to rapeseed oil, but decided at the last minute to use butter instead. The hazelnuts were hugely increased, now a massive 25% of the total content, and the sugar content is halved.

So with this home made version, we’ve reduced the calories by 36%, fat also 36%, the carbs by a whopping 65% and more than doubled the protein. I reckon that’s a pretty good result nutrition wise! 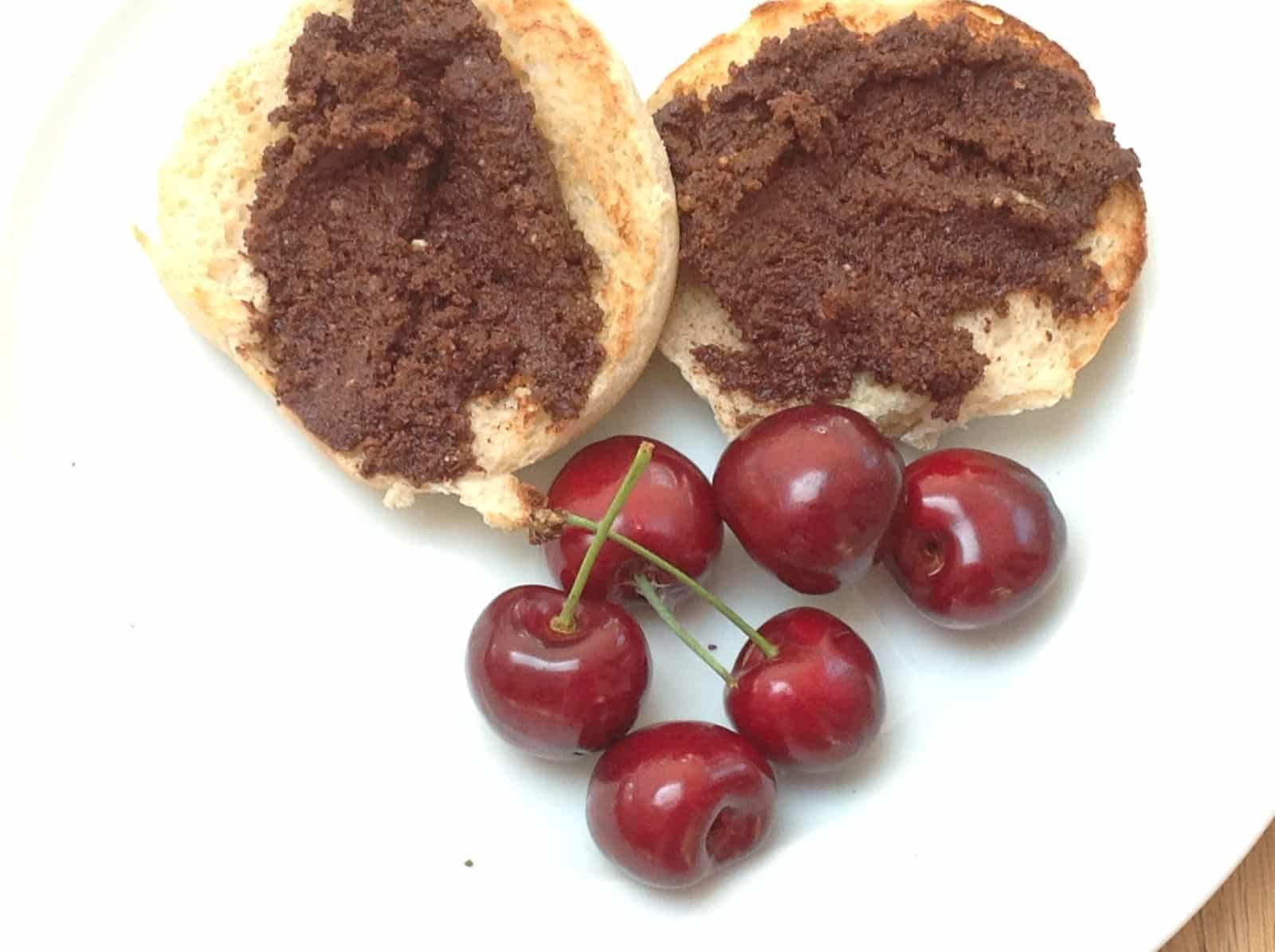 To make your ‘Nutella’

The first, and most fiddly, part of the process is to toast and deskin your hazelnuts. Put the nuts on a suitable container and toast under the grill or in the oven until roasted. Watch them closely, they’ll burn easily.  Leave until cool, then rub in a clean tea towel to remove the skins. I got fed up halfway through the deskinning and threw the half skinned nuts all in the processor, it didn’t seem to make any difference! 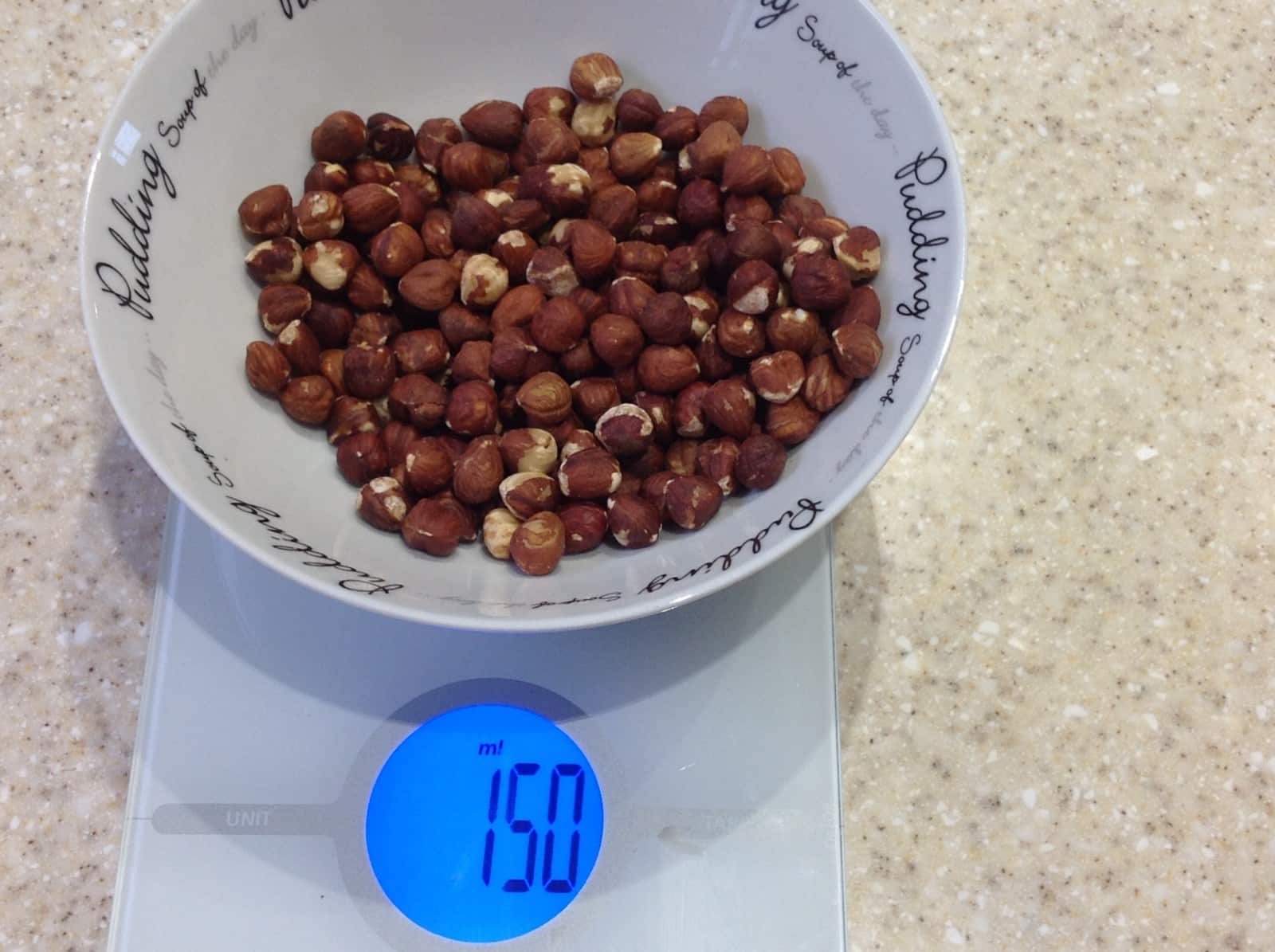 Put the hazelnuts in a food processor and whizz until a very fine powder. 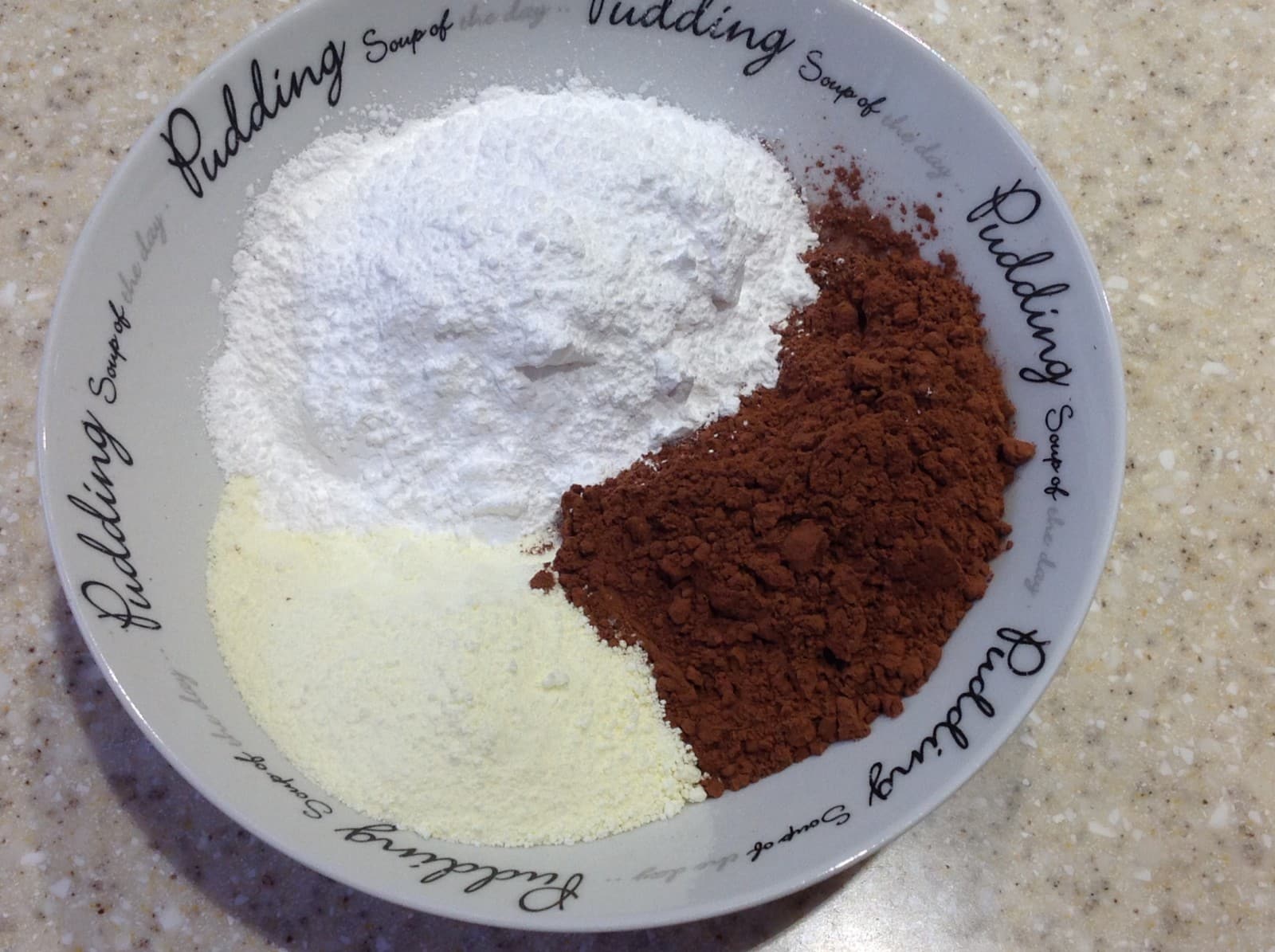 Add the butter, cocoa, milk powder and sugar and whizz again for a couple of minutes. Now add the liquid milk and whizz again. And that’s it, you’re done.

Taste. Add more cocoa if you want it stronger. Add more sugar if you really want it. 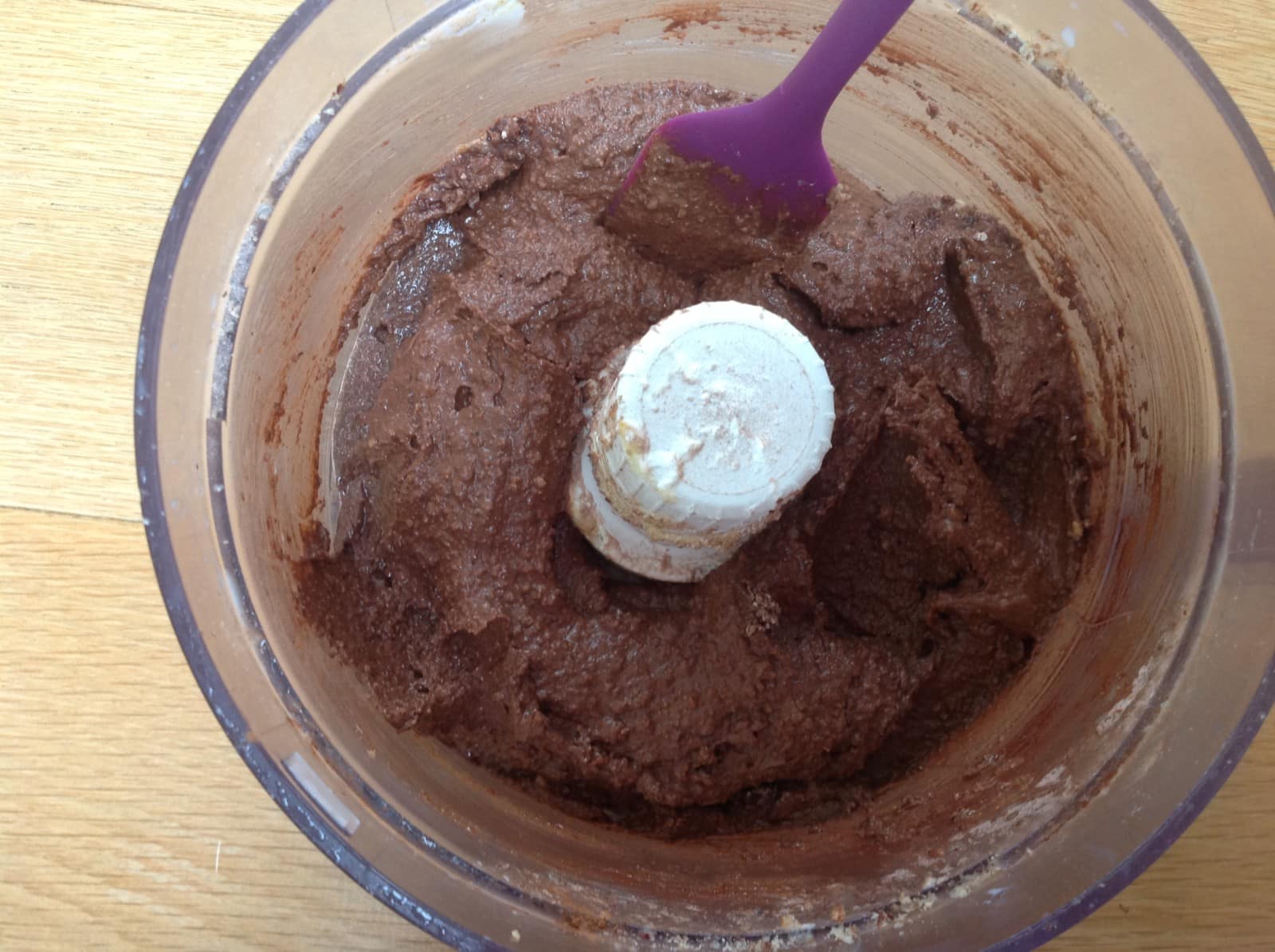 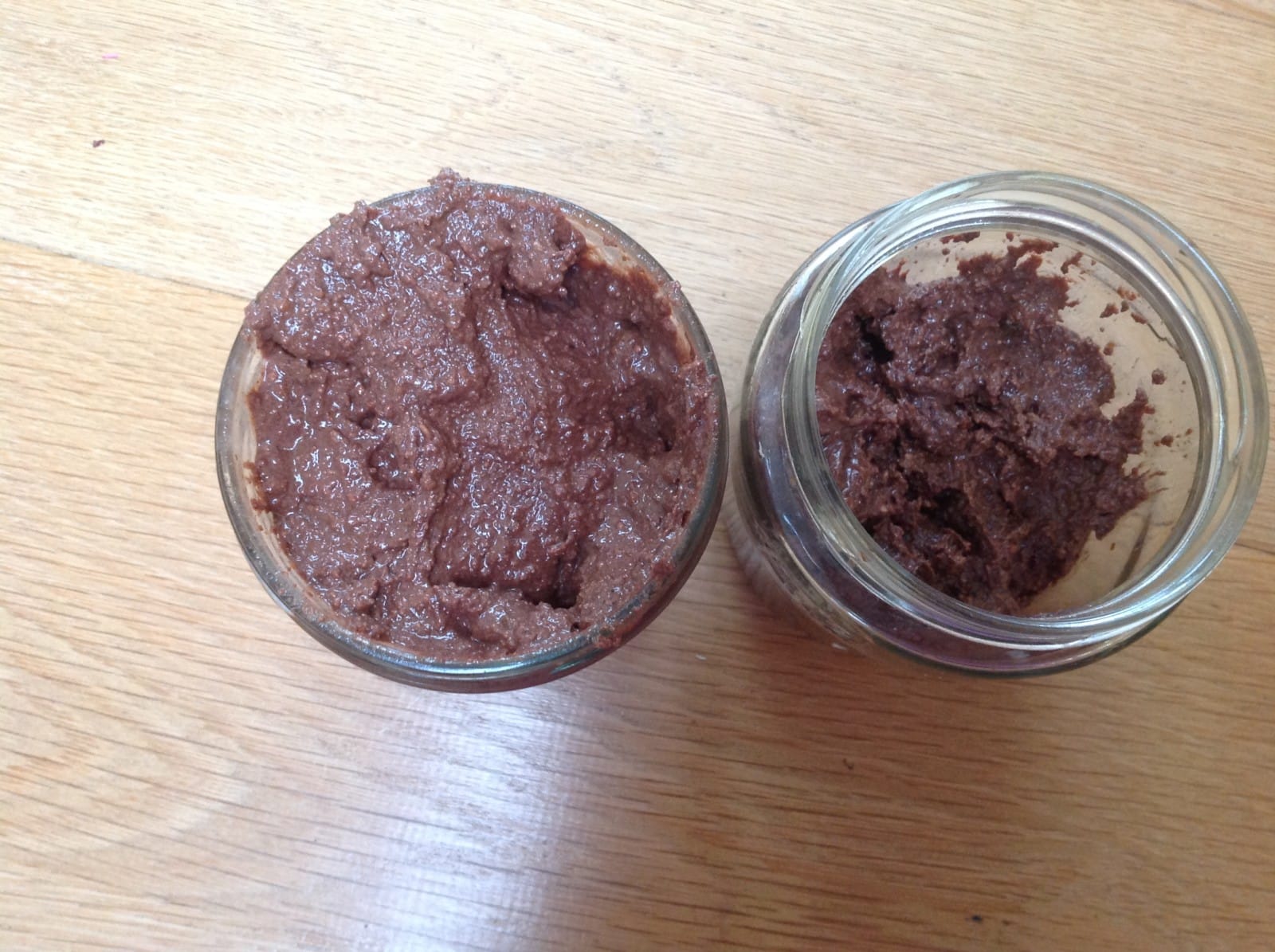 This is lovely, lovely stuff! I used salted butter and when I make this again, I’ll use an unsalted version. The finished recipe is just a tiny bit too salty. Instead of the salt seasoning, I’m aware that it’s there.

Other than that, I’m extremely pleased with it. And much to my surprise, it’s more or less exactly the same price as the branded stuff sold in Asda.

The liquid milk is only 80ml, so you could probably just use water, I doubt if you’d notice.

Coconut oil could be used instead of the butter. Or you could use rapeseed oil, as I was going to. If you do use oil, I would leave out the milk.

I can definitely taste that this is a hazelnut spread, and I used those nuts because that is what Nutella is. However, absolutely any nut that you want to use would all work well and give their own unique flavour.  Do try it

Since making the version above using hazelnuts, I’ve now developed this super simple version using ground almonds which just needs a quick stir to make it. The kids could do it themselves!

For this version, simply put everything in a bowl and stir together with a spoon. It seems a little runny to start with, but thickens up after a while.

A bit of orange zest grated in would be good don’t you think! 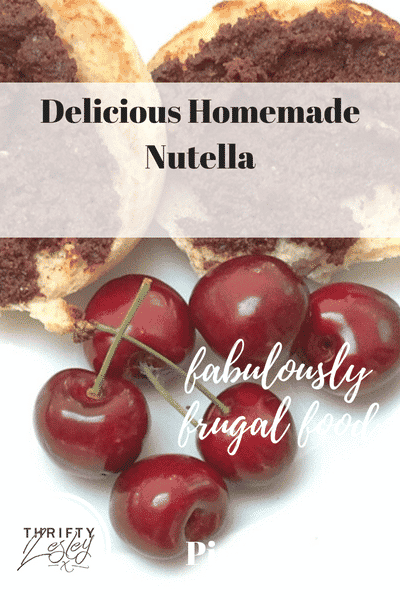