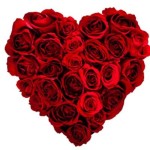 All week I have been hugging some lovely news to myself. My younger daughter’s birthday is today, and yesterday it was the 1st year anniversary of a relationship with a lovely man.

He plotted and schemed to throw a surprise birthday party for her. He took her out to dinner for their anniversary, and while they were out, friends and family assembled at their flat, chatted and laughed and cooked some party food.

At 8o’clock, DSiL feigned a stomache ache and said that he needed to get back and as they came in to the sitting room we all shouted ‘Surprise’. She was!

But the true reason for the plotting was yet to be revealed to DD. After a little partying, he gathered everybody in to the sitting room again and went down on one knee and proposed. I knew it was coming and teared up instantly, and I am now as well, telling you about it. I am so happy for her, they are so right together.

She had NO idea, it was really lovely. They have an in joke about Haribo rings, and he gave her one of those, so they can go shopping together to get something nice.

We don’t have a date yet, but the next year will no doubt involve lots of planning!