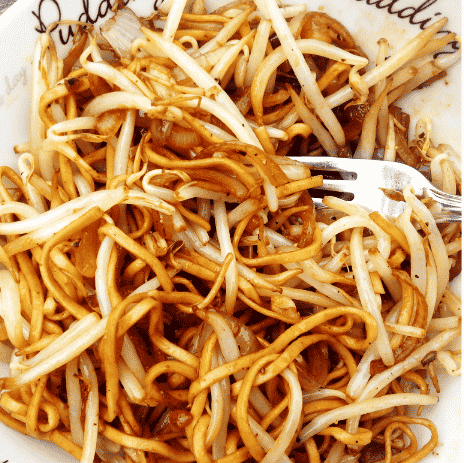 Although our favourite takeaway is an Indian one, we also like a Chinese now and then. When we do, we invariably get the same things each time, including a plain chow mein. When having a takeaway, we prefer a plain chow mein, but it is very amenable to adding all sorts of bits and pieces

I’ve been meaning for ages to work out how to make it so that it is as similar to the takeaway version as possible. There are lots of different versions around the internet and I’ve tried a couple. This is as close as I’ve got so far. I’m pretty pleased with this version and, as many of the recipes on Thrifty Lesley are, it’s pretty variable too.

What does Chow Mein mean?

Wiki has many interesting things to say about Chow Mein, too many to precis here

Yes it is. The calories in chow mein are fine for a dinner. The portion is very generous, so nice and filling too.

Measure the oil as you put it in the pan, rather than pouring straight from the bottle. If you want a particularly low fat recipe, cut the oil from 2 tblsps to 1 tblsp

There are 19g of protein in each portion.  If you want any more, add some tofu, chicken pieces or prawns

Chow mein can easily be vegan if you would like it to be. The only thing that needs looking at is the noodles as they often contain egg.

You could use rice noodles, Blue Dragon or Noodl do vegan noodles.

Is chow mein gluten free? It isn’t if you use ordinary noodles, but use the rice noodles and you’ll be fine – remember to check the soy sauce, you may need to change it to tamari.

On my meal plan for this week, I have this recipe, but this time I will be adding a chicken breast, a few mushrooms and a sliced pepper. Other versions that I would do include adding a pack of large prawns and a handful of peas: a bit of beef, or pork, sliced fine and a green pepper: to make a diffusion dish, I would add some sliced and fried halloumi and some carrots, sliced on the diagonal. I’m not that fond of tofu, but if you want a version with a dollop more of protein, tofu would work well.

I will also try adding lots of different veg: carrot on the diagonal, fine sliced swede, a handful of peas, chopped white cabbage and maybe top it all off with some salted peanuts. 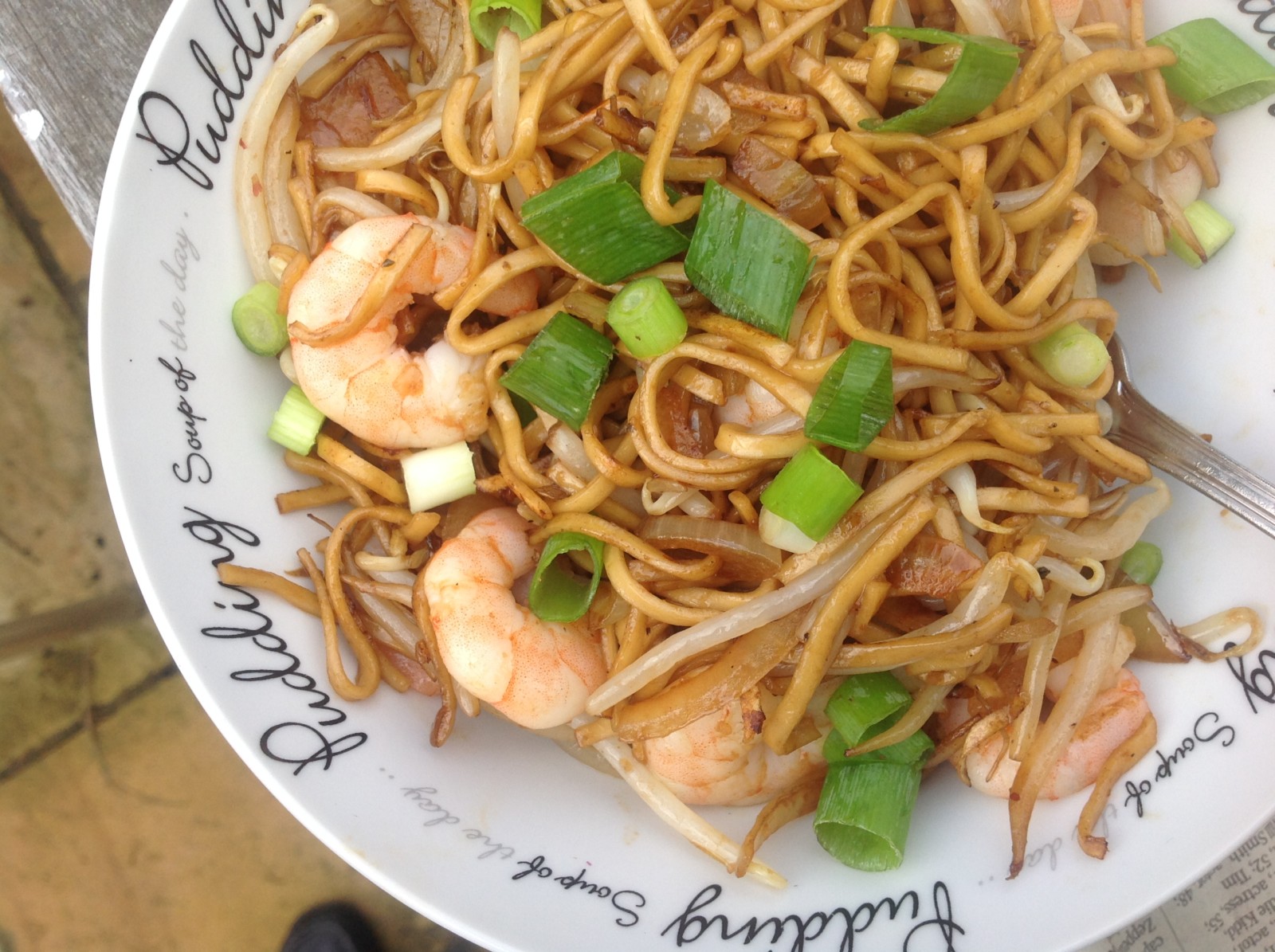 As with everything I do, see what you have in the cupboard, fridge or freezer and add whatever you think will taste good.

I was intriqued to see if chow mein would freeze, so I popped  a small dish of this into the freezer last night to see what it would be like. I’ve just defrosted it, heated it, and tried it. Success, those delicate little bean sprouts survived!

This means that chow mein would make a great home made ready meal for those days you don’t want to cook. I’ve also enjoyed tis cold, for lunch, the next day To be truthful, I couldn’t be bothered to heat it up, but it was really tasty cold, so could be used in a packed lunch for something different as well. 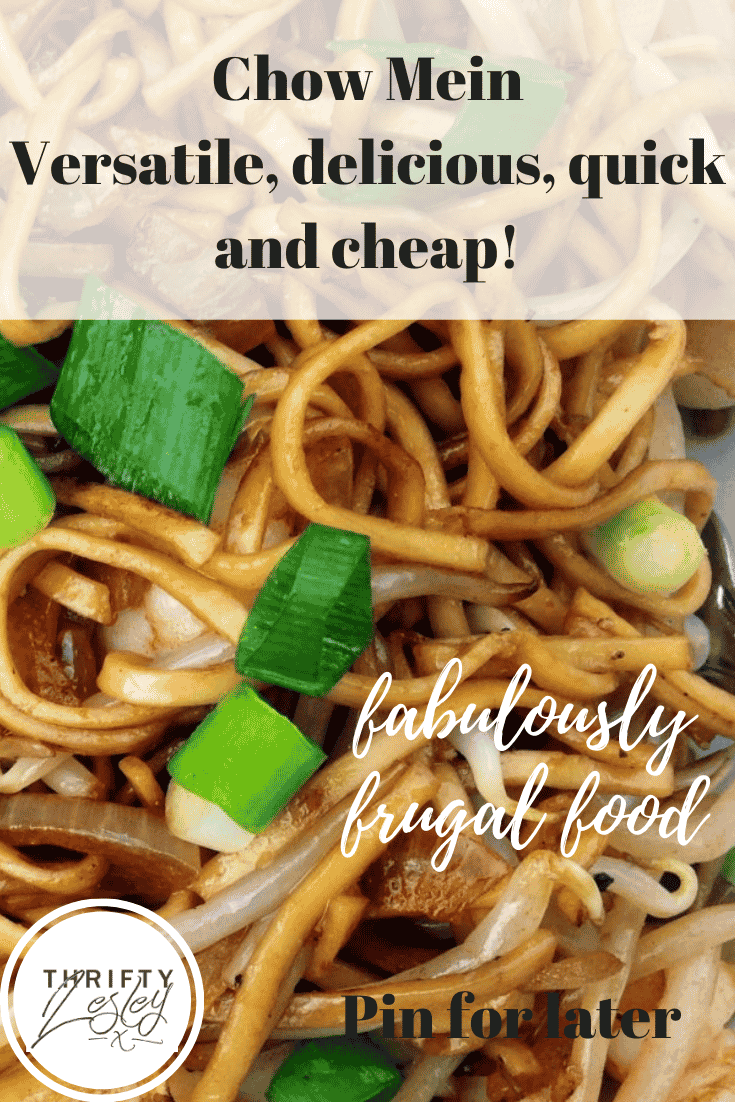 Freezes Well
Servings: 2
Cost per portion 61p
Calories: 572kcal
Author: Thrifty Lesley
Click on the check box to cross off Equipment, Ingredients or Recipe Steps completed.
If you click and buy anything, I may get a small commission on the purchase. It won't cost you anything extra. Some are just things that I like and/or use myself rather than necessarily best value 🙂
If you enjoyed this recipe, would you please consider leaving a review? It would really help


If you would your chow mein vegan, use noodles without egg in them, Blue Dragon and Noodl do vegan noodles. For a gluten free chow mein use rice noodles I popped a small dish of this into the freezer last night to see what it would be like. I’ve just defrosted it, heated it, and tried it. Success, those delicate little bean sprouts survived! Got a great recipe? How about submitting it to appear on Thrifty Lesley!