My best loaf so far

My best loaf so far 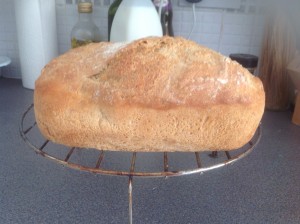 I tried the second bread mixture in the fridge today. I took it out of the fridge and added a little flour, just enough to take it from the almost thick batter it was to a loose dough.

Then I was going to do a dome shaped loaf on a tray, but it looked like it was going to bake really quite flat, so I popped it in a tin that was greased and floured first. Then I left it on the side until it had risen to the top of the tin again and baked it in a preheated 200C fan oven.

I tried to slash the top, but the dough was so soft, I couldn’t cut it.

Aiden, the teacher, said that we shouldn’t time our loaves, but learn how to tell if they were done. So, I left it until it was a good golden brown, then tipped it out of the tin and baked it a bit longer until it was crispy and crusty all over and put it on a cooling rack. I knocked the bottom and it sounded hollow.

By the time it was cool, it was losing its crust. I tried the end crust, which was delicious, and right enough, the middle of the loaf was still a little too moist. So I put the oven back on and baked for what turned out to be a further half an hour.

By this time, the crust was completely solid and I thought I might have overdone it and have a brick on my hands. 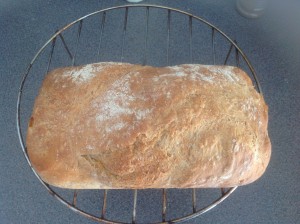 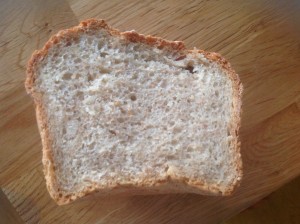 The finished loaf had a great texture. The crust was perfect, and the slices were light and spongy. The taste was superb. I think probably the best loaf I have made so far.

So, so far, I have discovered that 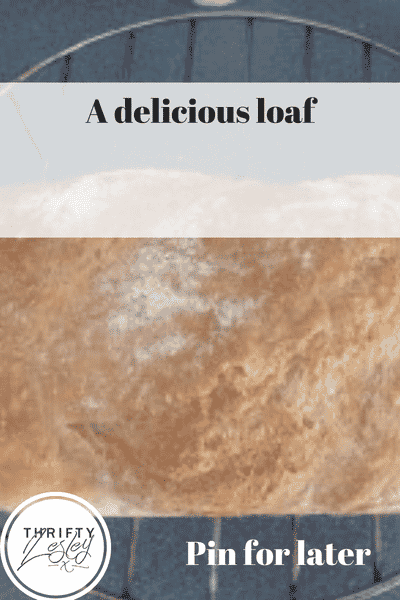