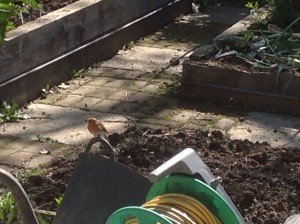 Well what a lovely Bank Holiday that was. Nice, sunny, warm day. Pity we don’t have anywhere to sit outside yet. What will be our sit ooterie is currently covered in rubble and building supplies.

We went out to our favourite Indian on Saturday evening with DD1 and SIL. DD1 was wearing the Karen Millen dress (remember that?) and very lovely she looked in it too. We had a good chat and a lovely meal. We went to Cafe Rasoi in Heathfield, it’s award winning, and well worth a visit if you’re in the area.

Then yesterday, DD2 and family came up. I roasted a chicken from the freezer and we had a lovely day. At one point DGD took a helleva tumble and we were wondering if a trip to A&E was on the cards for a broken arm. But it turned out alright, she had just given it a really hard whack. Skinned elbows, bright red knees and a very sore arm, love her.

I have spent quite a while over the last few days testing a new personal finance package called MoneyDance. I use Quicken at the moment and am very reliant on it for both personal use and for keeping track of things for the business. But it is no longer supported in Europe (it still is in America) and the version I have dates back to 2002, which in software terms is ancient. Every time Windows updates itself I hold my breath that Quicken will still be working. I have been looking for some time for something to replace it. I trialled Sage for a while. My goodness, that is one complicated program. I spent ages trying to understand it, but had no confidence that I could get hold of the data I put in, assuming I could work out how to get it in there in the first place. So that went back and they refunded me.

I even imported the American version of Quicken years ago, and although I could have put my data in perfectly well, (it would have been in $ rather than £, but I could have lived with that easily enough) it wouldn’t import my existing data, which I had been led to believe it would. The historical business data is very important, so that was a non-runner too.

I’ve also tried several  other packages. Many labelled as for personal use don’t do many of the things I need. Quickbooks, for business use, was almost as baffling as Sage.

Then Which emailed me something recommending various software packages. So I looked at them and MoneyDance seemed to be able to do everything I needed. I downloaded the trial version and gave it a good go, all seemed ok, so I bought it. It costs about £49, I can only say about as although it quoted me £49, the purchase was only available in $’s, so we’ll see when the credit card transaction comes through.

Over the last few days, I have uploaded data going back to late 2000, checked all the balances, tested all the reports and functions and generally gone for broke. So that’s it now, I am switched over. I shall run both MoneyDance and Quicken at the same time for a while, just to be sure.

Mr & Mrs Robin Bobbin are still very much in residence. Flying in and out even when we are out there working on the extension. They just hang about nearby until we turn our backs (or pretend not to look) and whoosh, in they go, then out again just as quick. We are having the bi-fold doors fitted tomorrow, so we’ll have to leave them open for a while. I’m not sure if the chicks are even hatched yet, I can’t here any cheeping, but not sure if I should be able too, or if they would be quiet. We will need to get that wall down fairly soon, I hope they fledge soon, don’t want to wait too long!

When I checked the greenhouse earlier, I hadn’t opened the door yet as the ventilation window was only open a little bit. And inside was a blue tit, panicking and battering itself against the glass. Poor little thing. It must have got in there through that tiny bit of open window, searching for insects and stuff.

Just had a bowl of soup for lunch made from all the leftover veg from yesterdays lunch, a tiny bit of gravy, a roast spud, some leftover puy lentils and the rest of the radish soup. Added a stock cube and some paprika and it was delish. Quite a big pot full, so will have to freeze the rest for another day.

The remaining chicken was stripped off and is in a dish in the fridge and the carcass was simmered for stock.

Dinner this evening is a peanut butter noodle dish I made using an Abel and Cole recipe. I have just  tried to find it to link to it, but it isn’t there any more. There is one with that title, but isn’t the right one.  It was easy, and delicious. I’ll cost it up and post it tomorrow.

Off to WI craft group this afternoon to play with the encastic art we did last time, maybe making some cards using it.

Right. off to get changed as still in my workout gear from a good old stretch out this morning.