Using what I’ve made, leftovers soup and make do and mend repairs

Using what I’ve made, leftovers soup and make do and mend repairs 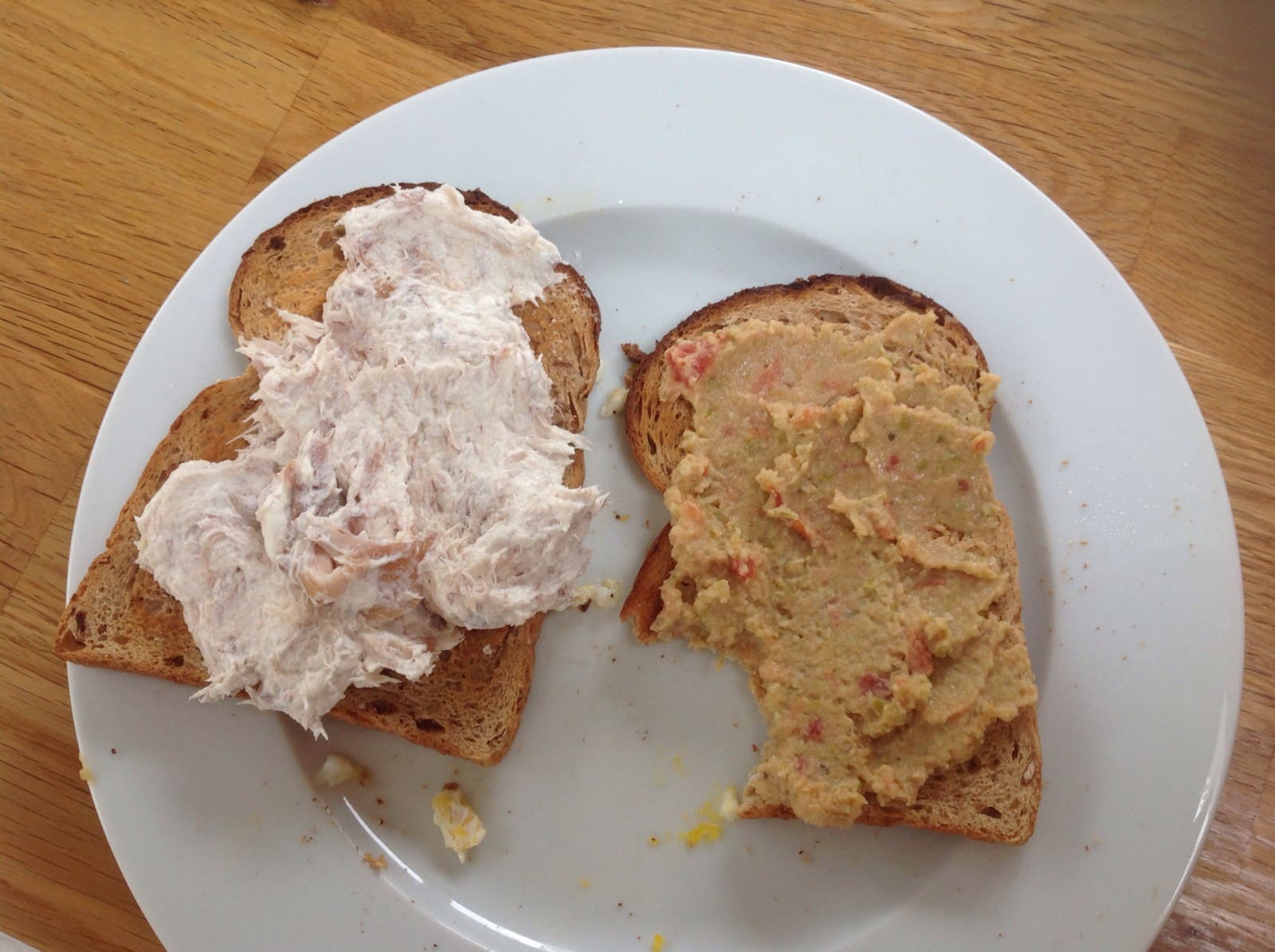 This was breakfast this morning, or rather lunch, as it was noon and I had not felt hungry enough to eat before then. A couple of slices of granary toast. One with Olive and Tomato Curd, the other with Mackerel Pate. Both were scrumptious.

Rest of the day was a bit Make Do and Mend.. I will be doing another 5:2 fasting day tomorrow, so I have been working out what to have. I need to know exactly what I will be having, in advance, or it will all fall apart on the day!

I know from experience that soup is a good option for me at lunchtime, on any day, let alone days where I am minimising caloric intake. I have also worked out the calories of loads of different soups that I do and they invariably come out at about 200 calories a bowl. So I just assume that is what a bowl is now.

I took the rest of the chicken, butter bean and chorizo casserole I made when we entertained on Friday, added some water, and whizzed it up into soup.

I had made DP a chicken curry using a Jalfrezi paste and a chicken breast. In went the leftovers from that. And whizz.

This evening, I roasted a chicken, and a dish of assorted veg sprinkled with Tandoori spice was also roasted at the same time to go with it. Into the soup went the leftover veg. And whizz.

It’s a very flavoursome brew now and will be a tasty lunch on a hungry day.

During the afternoon I did some sewing. I have a favourite fleece jacket that I wear often, with or without a t-shirt underneath depending on how cold it is. It has elastic drawstrings round the bottom, a separate one for each front and the back, so three in total. One of the side ones had poinged off from it’s fixing on one side and was hanging down. So this afternoon I had a hack, a thread through and a sew and it’s all better now. Very satisfying.

After that, I started another fix it up job. A while ago, I got a grey waterfall cardigan from a charity shop. It is very comfortable to wear and pretty versatile too. One side of the waterfall hung down about 6″ lower than the other side and I thought it had just got stretched out of shape. But after several tries wetting it or washing it and stretching it so the sides were even, and it just going back to what it was once it dried, I hacked off the extra with scissors. This meant that I had one side with a raw edge. I didn’t want anything very prominent and considered several things to neaten the edge. I ended up with the tie strings from a wraparound skirt that I altered. I unpicked the (very long) seam, in order to be able to put the raw edge in the middle of it. Because the cardigan is a waterfall, the parts that fall show both the right and the wrong side. So the solution needed to take that into account.

I was hoping to be able to machine sew the unpicked tie on, but because it is a knitted cardigan, I ended up thinking I probably wouldn’t be able to get a very good finish. Especially bearing in mind the double sided thing. I have done all one side, and have just started on the other. So far, I am pretty pleased with how it is looking. I’ll finish it off this evening. The colour of the tie I used should mean, with any luck, that the cardigan will still go with all the things I have been wearing it with.

It’s been such a mild winter down here in East Sussex that I’ve only really needed clothing like this. I’ve had no need for bitter weather clothing at all. So far. Cross fingers. 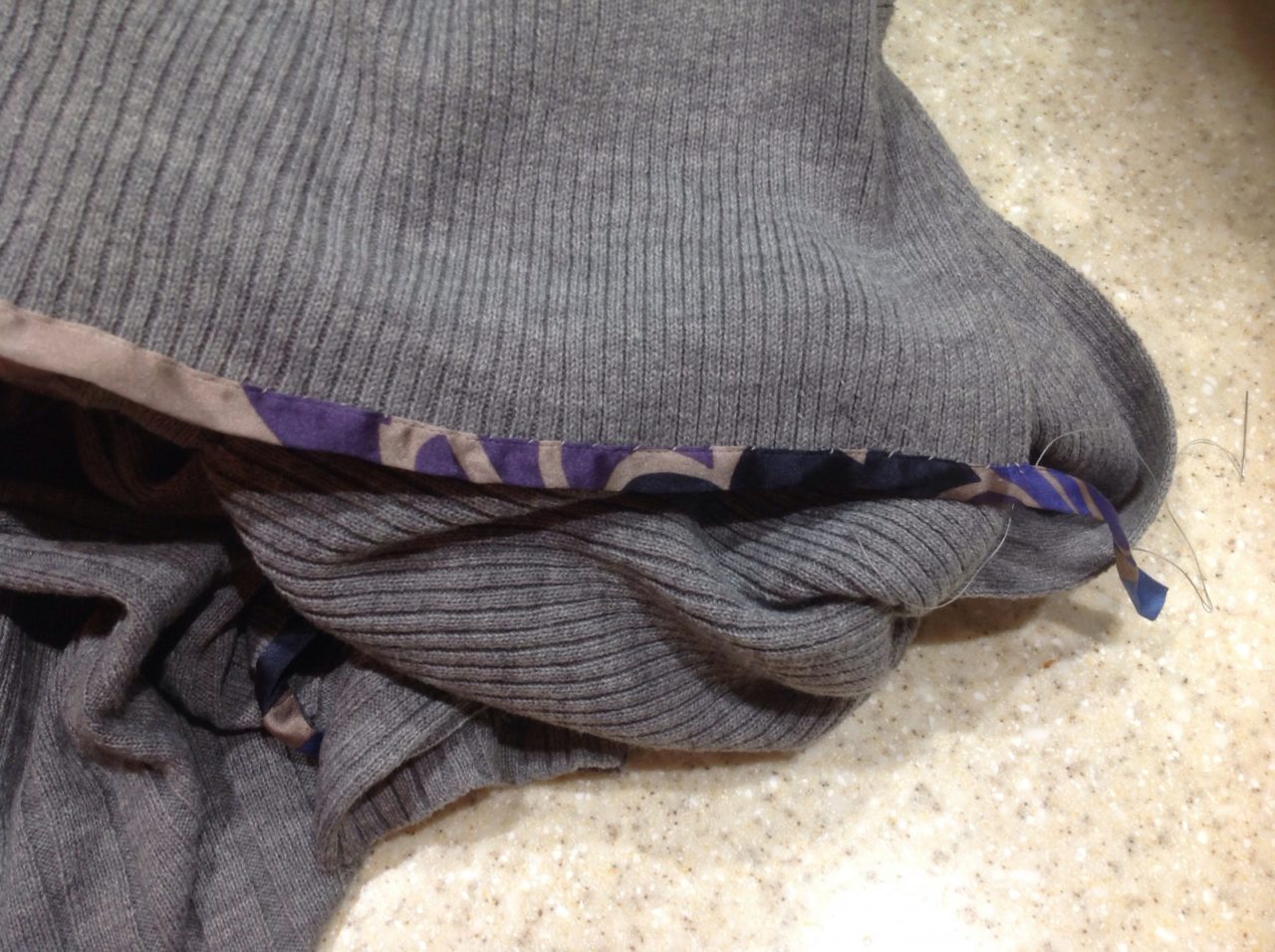