I had an interesting and rather nice day yesterday.

First of all, I went up the road to Burwash. On our local Freecycle group, a chap had offered an old Nokia, the type that makes telephone calls and pretty much that’s it. Just the type of phone that my Mum wanted. So he and I arranged to meet in a local pub, where he and a group of friends and relatives meet up every week for coffee, cake and a chat.

I found them all easily enough – it was all the laughing! I was warmly welcomed and invited to stay for a cup of coffee, which I did. There then followed a delightful interlude of chat, banter and finding out about each other. I gave the chap a pot of home made piccalilli to thank him for the phone, and off I toddled with a newly acquired phone, stopping briefly in the car park to buy a punnet of local strawberries. Which were as delicious as you would expect local Sussex strawberries in Wimbledon season to be.

When I got back home, I parcelled it up and sent it off to Mum. Blimey! Isn’t postage expensive! 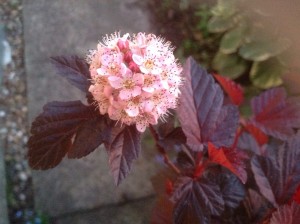 Then I had a little walk round the garden and admired the physocarpus shrub which has lovely flowers all over it. They even have a little bit of fragrance – my favourite thing in a garden, well….. after fruit and veg of course. 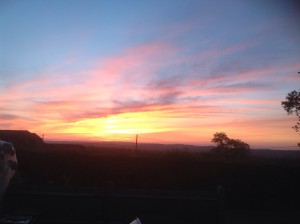 Then later on, as the sun was going down, we had THE most glorious sunset. Our little garden faces almost due south and gets a lot of sun, even tho the neighbours on all three boundaries are seemingly doing their best to shade us out with giant trees, overgrown bamboo and untrimmed buddleia. This aspect means that the front of the house faces almost due north. But it isn’t as dark as that may imply. We have a huge picture window to make best use of the lovely view over the valley, we can see right over to Mayfield, about 5 miles away. In the morning it is often in a basin of mist and the view is changing all the time, we stand and look at it often.