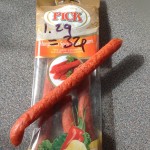 Cruising around my little Sainsbugs in Heathfield, I found these chorizo thingies. Only £1.29 for 4 of them, I opened the pack yesterday (it keeps for months unopened) and tried a bit of one to see how strong they are, and they have BAGS of flavour.

So I reckon one will easily give enough flavour to a dish for two, and at 32p each, we will be able to build some lovely cheap meals around them. I am thinking of using them in the next weekly meal planner. I have one earmarked in the planner to have on a pizza. One in a dish simmered with some chickpeas and tomatoes and served in HM flatbread. The third one with some farl made with dried potato, yes, that’s dried potato. Found that on northsouthfood.com . I have a very long list of stuff I want to post, and on that list is gnocchi with a spicy sauce (also on the third weekly planner) and Miss South made some with DRIED POTATO! Really! I thought, but it sounds like they will work, Miss South liked them and she is rather a potato connoisseur. I’ve got a packet of potato, and I can’t wait to give it a go. It’s certainly not an ingredient I would have thought of using, much like the fish paste in Jack Monroe’s Creamy Salmon Pasta.

The fourth one in the meal planner? Not sure yet, maybe in some lunch time soup.

So what else could we do with one of these flavour packed chorizo stick thingies? How about like with the blue cheese, but COMPLETELY different flavour, a frittata. Or a thick stew with butter beans and tomatoes. Or in a risotto, with, oh, all sorts of other things would go – peas, lettuce and peas, tomatoes, cauliflower or broccoli, butternut squash etc etc

or in macaroni cheese, or a couple of slices in a toasted sandwich, with gnocchi, or instead of bacon in a carbonara.

Chorizo is just as versatile as bacon, I can see these little lovelies being as much a staple in my cupboard as my favourite soft cheese!

What would you do with them?