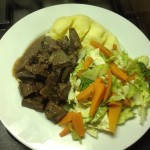 This is part of an experiment I did a while ago and definitely one for the carnivores. Veggies, look away now. I went to one of the two excellent local butchers and ordered some ox cheeks and heart. Goodness, just dug out the receipt and it was 25th September 2013, nearly 6 months ago! Didn’t think it was that long! 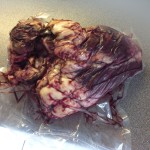 So to the heart first. It was huge. I have never cooked one before, and frankly, didn’t know where to start with it.  I know that people stuff them, but I wasn’t at all sure how long to cook it,or how to serve it afterwards. Do you slice it, or chop it into lumps. And then there the tubes and so forth to remove. Hmm, so I decided to put it in the slow cooker, cook it long and slow and deal with the tubes afterwards. The theory being they would be easier to get out when the meat was soft and falling apart. I just put it in there with a few sprigs of thyme, nothing else, not even salt and pepper. 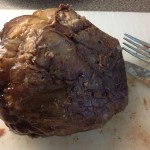 This was the heart after simmering slowly for several hours. Still not particularly appetising, but hang on, that part is coming, any minute now.

I chopped the cooked heart into pieces and was surprised to find that it was now all meat, with no sign of tubes or anything else yukky. The aroma coming off it was savoury and meaty, sort of like meat pies. It smelt sort of like steak and kidney and on tasting a piece, it had a firm, steak and kidney like flavour, deep and savoury and utterly delectable. It had made its own totally gorgeous gravy in the slow cooker, so all I did with it was slice it up and portion it out. Then I had 10 little foil dishes all ready for the freezer. As the heart cost me £4.61, that made each portion 46p. You could have it with mash and veg like in the picture at the top, or for a really old fashioned treat, cook it some more with onions and carrots and pop some dumplings n there to cook in the gravy. Makes real man food if you know what I mean. 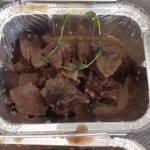 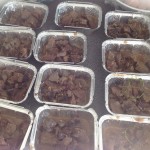 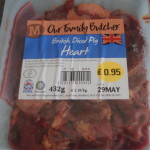 Now, I know that dealing with meat like this is not everyones cup of tea. There is a large Morrisons in Crowborough that sell heart, but not all their stores do.  The packs are neatly chopped up and prepared, all you have to do is cook it. Their packs are around half a kilo, and cost around £1, so much less than my butcher, making the meal cost a lot less, almost half in fact. But a butcher, if you have one near you, might be your only option to get any. Or maybe the butcher lorries at markets.

On mySupermarket, none of the supermarkets are listing heart, including Morrisons. The only one that is, is Tesco, showing Lambs heart in packs of 285g/£1.31, so £4.60/kg

I do urge you to try it if you can. 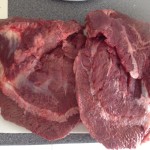 The other thing I tried was ox cheek. Not as cheap as they were as so many tv chefs have been talking about them. None of the supermarkets are showing it on mySupermarket, so again, a butcher is what is needed.

These are absolutely solid meat, no fat, gristle, bone or anything else. Just good meat. I have used these before and love them. I just put them in the slow cooker for several 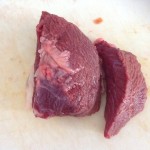 hours, where they cook to an unctuous, savoury, glorious deliciousness, with masses of deeply flavoured gravy. They go a long way, they taste so savoury that just a little is all you need, and they flavour a casserole beautifully.

I stretched this out with all the usual casserole vegetables, a little pearl barley, plus some dumplings. 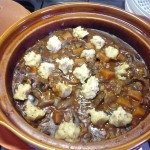 And again, portioned it up for the freezer.

I can’t remember now how many portions I got from this, but I had to stretch it a bit as they were more expensive than I had been expecting. But I managed to get them sub-50p, which is what I aim for on here.

These kind of warming, rib sticking cuts warm my heart and comfort my soul. All feels well in the world