Going to Jail in Inveraray

Going to Jail in Inveraray

Portsonachan is very peaceful and lovely, but we wanted to have a look around at something today, so we went off to Inveraray.

We had a look around the Jail there and learned all about jails in the 19th century. It is a great attraction, and if you are ever up there, do go and have a look.

Previously, people were punished using stocks, fines and other such things, being imprisoned was a new thing. Life in the new jail for inmates gave them a tedious but nourishing diet of oatmeal, bread, broth and potatoes. They were given clothes and shoes, and had somewhere to wash. It was so much better for ordinary people than life outside, that often inmates would reoffend immediately on release. Children as young as 6 or 7 could be imprisoned for offences as minor as stealing a turnip from a field.

Having had our picture taken 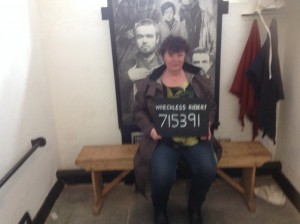 We had a look around the rest of the town, had some lunch etc. and by the time we had decided to look at the castle, we had had enough, so decided to ‘do’ that tomorrow.

It has featured in Downton, and is quite famous. 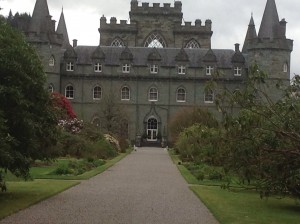 We are spending a lot on lovely food this week, it is one of the things we like to spend on – eating out. Are you doing the Live Below the Line Challenge this week? It is quite hard isn’t it. If you would like to donate to ActionAid, the charity I am raising funds for, the link is at the top of the page, on the sidebar.

Thank you so much for all you lovely readers who have donated, every penny helps. When we get back, I shall add my own donation, and you never know, I might do another 5 days. I quite enjoyed thinking up the plans I have done so far, I might even come up with another one.