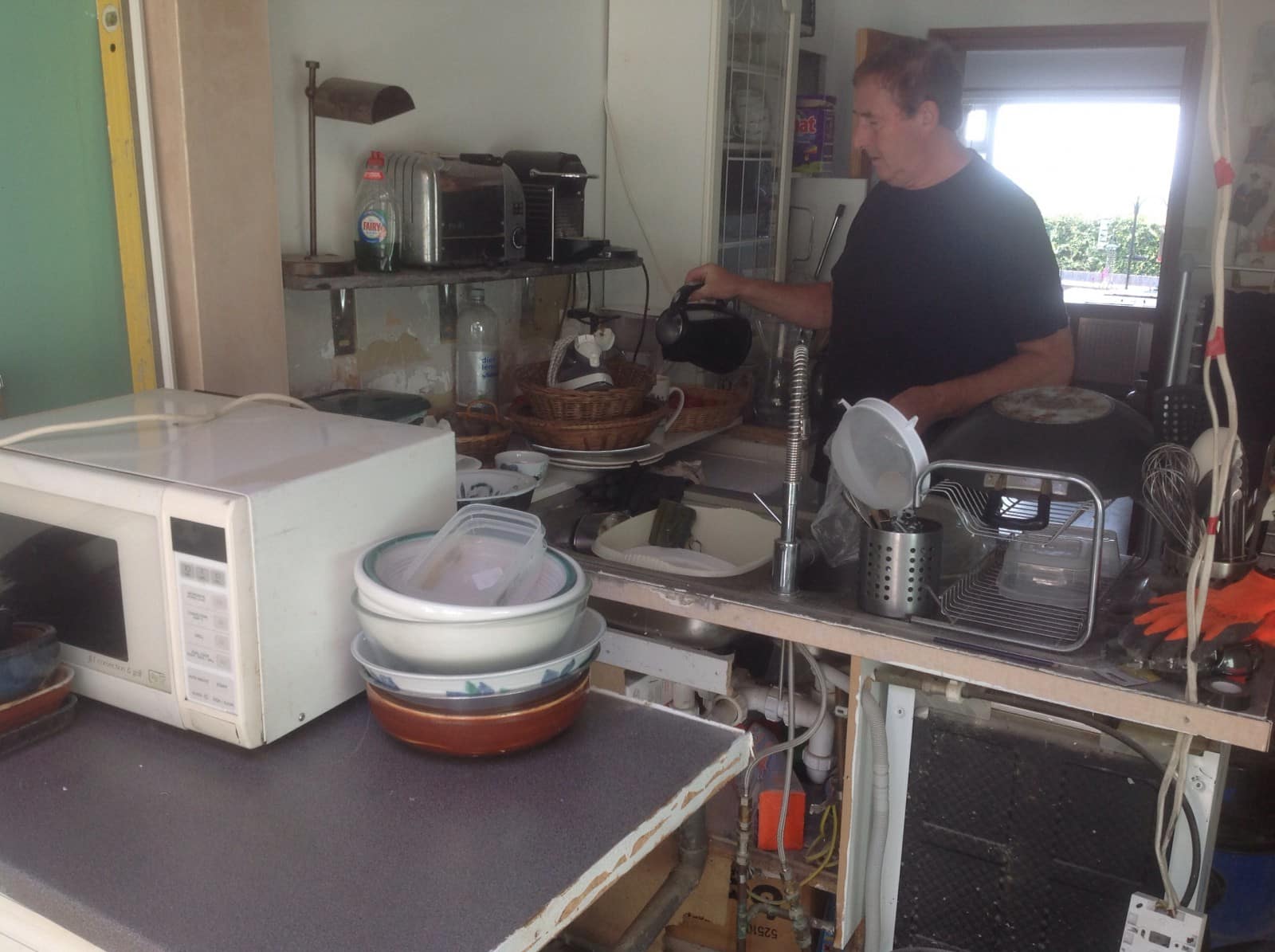 I’m pretty tired right now. The kitchen units are due to arrive on Friday, so today, we started taking out the old ones. The capacious new larder unit will be fitted first, so the corner where that will be going was where we began. 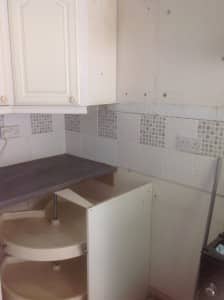 HOW much stuff was in those cupboards! I had to empty them all out and find somewhere to put everything. Then DP banged and crashed and dismantled everything and we took all the bits that we didn’t want any more outside.

Then I had to find a place to put some of the cupboards on the floor in the new part. But not where we need lots of space to put all the boxes that will be arriving on Friday.

After that, I had to sort out the bits we need for the next week and put them in the cupboards on the floor. Those same cupboards have work surface balanced on top, which is my sole remaining worktop. Apart from the shelf balanced over the washing machine and the part where the draining board is.

DP is making us a very well earned cup of tea in the top picture.

Then I had to put everything else out of the way somewhere until their new home is ready.

I had prepped dinner early this morning. Was very glad I had when it was time to eat. Not only was I worn out by then, but I have to go to an awkward corner to get a knife or a spoon to stir with, instead of just reaching down to the drawer where they were, and there is nowhere within easy reach to put things from the hob. Good job it’s not for very long.

You realise I won’t be able to find anything for weeks like this! 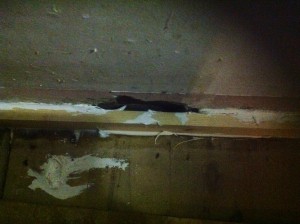 Do you remember we had an awful draught coming from that corner in the kitchen in the winter? Icy tentacles whistling and reaching out from the drawers and every time I opened a cupboard. DP put boards on the floor underneath the kick boards, sealed everything he could find, but nothing made a difference. Today we found the source. When we had taken all the base cupboards away, there was a huge gap, of an inch, or even two in places, between the floor boards and the plaster of the wall, going right through to the enormous gap underneath the floorboards, that is ventilated with outside air to keep away rot. No wonder there was a draught! DP very quickly got a piece of wood along there with lots of sealer around it to close the gap. Even so, there is still some gap there, as you can see in the (very bad) picture above. He will stuff that gap tomorrow!

That will make a big difference in the winter. The sofa where I sit is right in the line of that draught and it made things very uncomfortable when it was really cold.

My Son-In-Law to be has just started a new business and I offered to do him some leaflets. He wanted it on black paper with yellow ink, unusual, which I think is the point, to stand out. The black paper was a challenge to find. The local stationer said he could only get 4 reams, which he would have to order, and it would be £126! EBay turned up trumps and I got 100 sheets for less than a fiver, much more like it. The package arrived on Tuesday and I attempted to print the leaflets which I had previously designed.

The yellow ink was so faint on the black paper, I could barely see that anything was printed at all. I tried all kinds of variations, but nothing showed any better.

I have a laser printer that I haven’t used since we moved here 8 years ago. It’s just been sat on a filing cabinet in the , second bedroom.

I hunted out the cables, connected everything up, changed a worn out cartridge, and hooray it worked. Tested it using ordinary white paper and it looked great. Loaded up the black paper, and it didn’t like it. Not one bit. I just kept getting a paper jam error. I tried different paper options of ‘recycled’, ‘colour’, ‘thick’ and ‘unspecified’. Nothing. Paper jam. It flat out refused to print on the black paper. I think it must be the way that a laser printer works, black being too dark for it to cope with making the image.

I ended up doing them using red ink on white paper, and they look great. They are A5, and I have just finished slicing them in half with a guillotine. It’s something I bought years ago from Viking, the office supplier, and I have used it such a lot, it’s a really handy thing to have around. It’s not quite the same as the one I have linked too, but similar.

So, tomorrow, there will be more cupboard emptying and removal, so I’m off to bed. I have a new book to start, The Luminaries by Eleanor Catton. It’s a bit of a doorstop, and I have two weeks before book club, so best get started.