Before I tell you about the larder of doom, I’ll talk about the Hive. Have you heard of it, or tried it? There were a couple of books I wanted and Jen Gale had blogged about buying from the Hive instead of Amazon, which I must admit is my first port of call usually.
I looked up the books I wanted and they were more or less the same price, just 30p or 40p difference, and no postage. If you buy from there, you can nominate a local book shop to deliver to, then they get a bit of the price.
I picked them up today and asked about how much they got, she would just say ‘I get a little bit’, so I’m not sure how much. She wanted me to buy from the shop, which I can understand, but they would be £5 or £6 more from there, or even more, and I don’t want to spend that much more per book to support a local business.
It was all very smooth. You order and pay like on Amazon, then when they are ready to be picked up, they send you an email. You can get stuff delivered to your home address as well, but I don’t know if they get anything then.
Have a look and see what you think. I will definitely be using the service again. I’ve cancelled my Amazon order of Jack’s book and reordered it on the Hive.
We are very lucky here in Heathfield. We have a market twice a week, although the fruit and veg aren’t very cheap, an auction every week for just about everything you could think of, two good butchers, a green grocer, a vintage shop with very covetable stuff which I am much too tall (and wide) to fit into, a brilliant ironmonger, two places that sell bits and pieces of furniture, a wonderful Italian deli, a good health food shop, a great bistro, a place that does reclaimed garden stuff, a place that does reclaimed building stuff, lots of other shops, too numerous to mention, all the usual other shops and this independent book shop.
I try to support local businesses when I can. Lots of people weren’t very happy when a Costa arrived (the kids LOVE it), so we make sure when we have a coffee we go to one of the independents, of which we have several.

So, to curry, and the larder of doom. I have a larder packed to the gunnels with all sorts of stuff. I have a fridge freezer that I have to perform origami on to get anything in or out. Another small one in the loft, similarly full ( it was only supposed to be temporary) and a THIRD small one, also in the loft, that I got from Freecycle. It has a dodgy lid so that it freezes up if kept on. But that wouldn’t matter said I, as I shall only use it when I make the 40 or 50 portions of soup I make for a woman as a paid thing. It will make them much easier to transport and fit into her chest freezer.
I expect you can guess what’s coming next. Yes, it has a LOT in it. Not quite so much today as I took several pots of Gigantes Plaki to one daughter recently, and the other daughter came up yesterday and we decanted three carrier bags full of stuff for her to take back with her.
I have made loads of soup today, one more batch to go. I should just about have room to freeze them. 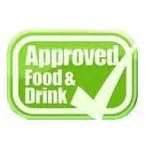 y efforts to use up what I have, I dug out one of the packs of aduki beans that I got from Approved Foods last night and put them to soak. I got 5 packs at 20p each for 500g.

Then this morning, I fried a couple of onions, 10p, an ancient green pepper, 40p, mixed in the now cooked beans, 20p, and stirred through two sachets of Tandoori Curry paste at 21p each, and the last of one of the two packs of Coconut Milk Powder, 20p, all, except the veg, also from Approved Food.
Then I chopped up and added an entire white cabbage going manky in the bottom of the fridge, 40

Then using the magic number of 300g I learned from Jack Monroe, I weighed out the mixture into freezer boxes and got NINE portions, which works out at just 19p each – billy bargain.

I had one for lunch and it was delicious! Nutty from the beans, tangy and spicy from the curry paste and deliciously creamy from the coconut milk. It was very sustaining and at 6pm, I am still not particularly hungry.
Trouble is I now have another 8 portions, and guess where they will have to go?

I know you probably won’t have these ingredients at this price, but I wanted to tell you about it for two reasons. One, it shows just how cheaply you can make a meal for using stuff from AP (avoiding all the tempting choccies and biscuits 😉 )
And two, I’m not that good at making a meal from what I have in the cupboard, I’m much more, this is what I want to cook, what do I need to make it. I really really need to repeat this type of exercise more often so I use up what I have. DP doesn’t like this type of food, but I love it 🙂

When DD1, her husband and daughter came up yesterday, I did the Tomato Dahl with frozen spinach and coconut powder stirred through that I did recently. We had that with some brown rice from the cupboard, and a deliciously fresh granary loaf was being eyed up, so we had a slice of that as well. It all disappeared rapid fashion, so I think they liked it, although DGD is going through that phase that lots of children seem to go through, where she only wants certain stuff and she just had a slice of bread and butter and a banana. We did actually manage to get half a teaspoon of Dahl in her mouth but it was spat out immediately before she could have tasted it – oh well.